"Mark my words - the monkeys are listening."

Monkey Madness was released over 11 years ago and has since become known as one of the defining quests of RuneScape. The time has come to give it a sequel. 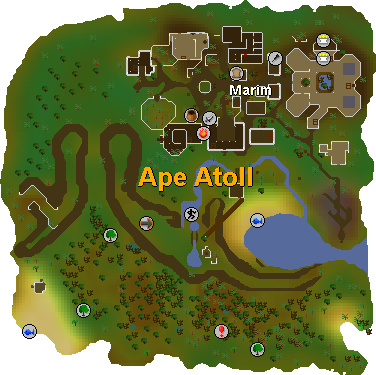 One thing the community have made clear is that you don't want to know any details of the Monkey Madness II story.

We are going to be keeping all details of the story under wraps until the quest is in game and you have had a chance to enjoy it!


However, it is worth mentioning that we wrote this quest with a few goals in mind:


If the above sounds good, you will be sure to enjoy what we have in store.

Monkey Madness II is a Grandmaster quest. As such, it must provide rewards fitting for such a challenging quest. We would like to offer several rewards for those of you experienced enough to complete MMII.

Obtained from content unlocked following the completion of Monkey Madness II, ballistas are a slow, hard-hitting ranged weapon. Ballistas will use javelins as ammunition.

Ballistas will not be best-in-slot weapons but they will fill the gap of accurate, hard hitting ranged weapons that do not require a special attack in order to be useful.

Ballistas will not require the completion of Monkey Madness II to use.

Zenyte jewellery
Please note: Zenyte equipment will be offered in a different question to the quest.

To accompany the introduction of this new gem, a new enchant spell would be added to the standard magic spellbook which can be used to enchant zenyte jewellery. This spell, Level 7 Enchant, would cost 1 cosmic rune, 20 blood runes and 20 soul runes to cast.

Let's take a closer look at the requirements and bonuses offered by the zenyte jewellery.

Click the headings below to see more information about each item.


Zenyte's passive
Please note: The zenyte passive will be offered as a separate question to both the Monkey Madness II quest and zenyte equipment.

Charged zenyte jewellery would provide a passive healing effect. If you have a charged piece of zenyte jewellery equipped you will have a 10% chance of healing 5% of the damage you deal. This effect lasts for 10,000 successful hits. Once 10,000 hits have been dealt, the zenyte jewellery returns to its uncharged state and would require another onyx to become charged once more.

Wearing multiple pieces of charged zenyte jewellery would not improve the healing effect.

One question that many players would like answering is whether or not pures will be able to complete Monkey Madness II. In order to answer this question, we will be polling allowing pures access to Ape Atoll without having to go through Daero's training as a part of the Monkey Madness II poll.

As always, we are very eager to hear what you have to say about our proposal for Monkey Madness II. If you have any feedback, please be sure to let us know! If you have any thoughts at all, we want to hear them!

Posts: 6,000Rune Posts by user Forum Profile RuneMetrics Profile
Wow, looks awesome. Will we be able to use the uncharged jewelry with the base stats but without the healing effect?
2004 Veteran
-
Maxed OSRS 2/20/16
-
Comped RS3 6/2/21
-
@HutchensRS

Posts: 3,907Adamant Posts by user Forum Profile RuneMetrics Profile
So hyped for this

My goals are beyond your understanding

Jagex Moderator Forum Profile Posts by user
Hutchens said:
Wow, looks awesome. Will we be able to use the uncharged jewelry with the base stats but without the healing effect?
Yep. If you want the healing effect, you charge it with onyx gems. Twitter: @JagexKiere*

Posts: 322Silver Posts by user Forum Profile RuneMetrics Profile
I like the idea of the quest but I don't like the rewards. I agree javelins need a use but imo the ballista looks completely out of place. Would vote yes to all jewelry apart from amulet of torture.