You've been asking for it - through social media and, of course, memes - and we're finally making it happen. We're happy to confirm that from July 29th the Mahjarrat Aura will be obtainable by all players (yes, even Ironmen!).

Players will be able to grab the Mahjarrat Aura for 1,000 Reaper points, which we think reflects the fact it's a best-in-slot aura for a lot of PvM activity. 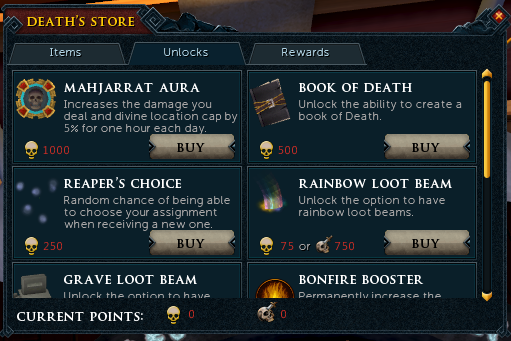 NOTE: Obtaining the Mahjarrat Aura is not required for the Trimmed Completionist Cape Requirement.

However, as it has also been available as a purchase previously, we don't want those with little interest in obtaining all those Reaper points to miss out. Therefore the Mahjarrat Aura will also be available in exchange for 3 Bonds, which at this moment in time equates to a gold amount of approximately 65 million.

It should also go without saying that if you signed up for Premier Club in 2016, the Mahjarrat Aura is already unlocked on your account and available to use.

Any chance of getting some of the other top Auras?

Furthermore, we're also treating this as a pilot for the possible release of other Auras previously available via the Premier Club in the future, depending on the reaction to this initial offer. But rest assured - the Mahjarrat Aura will be available to everyone for good regardless of what happens with other similar Auras.

If you have any more questions or suggestions, members of the RuneScape team will be available to chat in our official Discord server in the mahjarrat-aura-discussion channel from tomorrow (June 19th) for the rest of the week. Join the discussion here!

Posts: 41,301Sapphire Posts by user Forum Profile RuneMetrics Profile
Gotta say, it looked good at first that Jagex finally seemed to listen to the playerbase with good intentions, but then, of course, the MTX greed had to step in:

Mod Meadows said:
However, as it has also been available as a purchase previously, we don't want those with little interest in obtaining all those Reaper points to miss out. Therefore the Mahjarrat Aura will also be available in exchange for 3 Bonds, which at this moment in time equates to a gold amount of approximately 65 million.
In other words, "if you don't want to bother yourself with this boring grind, here's an option to pay-to-win instead, skipping the grind and getting the 'power-up' immediately". Great, so PvM is now further devolving with shady MTX practices as well.

How about this Jagex: instead of intentionally designing something to be a boring grind and offering a "solution" to it with extra cash payment, why not just make the game fun to play so that people don't want to skip playing it?

Mod Meadows said:
Furthermore, we're also treating this as a pilot for the possible release of other Auras previously available via the Premier Club in the future, depending on the reaction to this initial offer. But rest assured - the Mahjarrat Aura will be available to everyone for good regardless of what happens with other similar Auras.
I hope you do release more auras to the game via actual gameplay in the future, but do it properly and not like this. Make them fun to earn, instead of boring grinding with MTX payments.
"Volat Accipiter libera est; venandi sua natura est."
~Accipiter striatus

Weehooo!! I will be able to get that aura soon! Thanks for that!

Have a Wonderful Day!

Posts: 7,608Rune Posts by user Forum Profile RuneMetrics Profile
1000 points - wow... that's probably going to take a while. Considering you can buy 3 hydrix for this and still have a surplus remaining it probably is only feasible to obtain them as ironman this way. You should rather lower it to something like 500 - or simply include it in the loyality store for a t5 aura adequate price. It certainly is a step forward from not accessible at all for players who missed it out.

Anyway - is there a specific reason why you do not update the reaper store requirement for the trimmed completionist cape after you're trying to enforce consequent guidelines for both capes after all. It's already the second new unlock ignored for this piece of content. Improvements: Tooltip / (F2P) QoL v2
Quick Fixes: Invention

Posts: 7,335Rune Posts by user Forum Profile RuneMetrics Profile
1000 reaper points seems too high. It should be closer to 300-400 points since it doesen't affect boss killtimes. Bonds have too many uses and memberships are not worth buying for rs3 anymore when bonds are only 4m in osrs. Also it would devalue ironmen if they can unlock the aura with bonds. The brightest ideas are the most undervalued. I support discontinued tokens and ending price manipuiation.

Posts: 1,880Mithril Posts by user Forum Profile RuneMetrics Profile
I already have all the auras but the price seems high for what it does now. If it still gave the 50% damage once a month then maybe it would be ok but it don't.

I would have thought the dwarven aura would have been in higher demand than this one and I remember they also said the desert aura might be obtainable from skilling/levelling up Menaphos rep in the future but nothing came of that.

Posts: 10Bronze Posts by user Forum Profile RuneMetrics Profile
1k for an aura is a hella ton just saying, but would know it if u play the game and know u have to buy aura resets for zerker auras to be able to pvm and dont get cancer but ok'
hate aura scape system that we locked for accuracy behind auras else we cant hit for sh*t

good that it can be bought for 3 bonds.

I have a surplus of reaper points, but it's clearly more profitable to buy 3 hydrices for 900 points, make them into rings/amulets and sell for about the same (or more) as what 3 bonds cost in gp.

But then wouldn't players who want membership via bonds just swap gp to osrs? So it would just increase the gp value of keys, rc etc? Seems like a niche benefit to me, but eh, I don't have any the info on how many bonds are used for those specifically.

I'm not a massive fan of MTX in general but at least this type of MTX isn't randomised gambling like loot boxes is. Your still ultimately getting what you pay for like you would with a DLC.

As for the grinding aspect...

Well honestly, what were you expecting? Having played OSRS even you should know this game revolves around gambling and frankly I'm thankful they are letting us obtain it with in game methods at all. Stop your relentless bitching please.

You know who you are. My neighbors a jerk

Posts: 20,042Opal Posts by user Forum Profile RuneMetrics Profile
This is a fair update to all players.

Now that even new players can have a chance to earn the "discontinued" Mahjarrat Aura either from playing the game for Reaper Points or converting 3 bonds for it.

What makes it even better than the other Auras is it doesn't require Loyalty Point, and that means even totally brand new players don't have to wait a year or two to get one of the best Auras.

Perhaps the other SGS auras can be earned in game or bought with Bonds, RC or won from TH gradually going forward too?