Happy Tuesday! You’ll notice that this week’s newspost has arrived a little late, and that’s because we spent all of Monday plucking shuriken out of the furniture. It turns out that while we were all sunning ourselves over the Bank Holiday weekend, the Ninja Team orchestrated ANOTHER strike! Let’s see what they’ve been up to this time…

This week the Ninjas made a precision strike against a handful of tiny targets all over the game. They’ve made moves against boss instances, interfaces, and more!

To begin with, we’ve given the entrances to boss instances some new options. Starting today, you’ll be able to right-click or long-press to ‘Join’ or ‘Rejoin last instance’.

Some bosses also now have ‘Enter encounter’ and ‘Custom encounter’ options built into the entrance to their lair. These options combined make it easier than ever to get into the fight!

And while the Ninjas were sticking to the shadows to escape the bosses’ eyes, they noticed that some players were able to enter Nex: Angel of Death instances after the fight had ended, causing them to get trapped until they logged out. This issue has now been fixed.

Next up, the Ninjas turned their attention once again to interfaces:

Last but not least, those of you who have completed the Hard Desert Achievements will now be able to continuously auto-pickpocket the Desert Phoenix.

Oh, and one more thing. Has anyone spoken to the Doomsayer recently? He’s started harping on about the Araxxor boss fight. If you’re yet to face this oversized arachnid, you might want to heed his warning.

You can see where else the Ninjas have been lurking this week in the Patch Notes post.

You know what, I think there’s far too many shuriken scattered about to account for the regular Ninja troupe. It’s almost as though they’ve swelled in number. No, it’s not the forbidden clone jutsu – they’ve been recruiting!

Please welcome Mods Chaose, Canine and Shogun to the Ninja Team! They’ll be joining Mods Kalaya, Erator, Abe, Breezy, Timbo, Kari and Dorn on their epic quest to banish botherations from the world of RuneScape. Blimey, those katana certainly are sharp.

Got a job for them? Pop on over to the Dojo, where you can submit your challenge.

Alright, that’s the last of the ninja stars cleaned up. What’s next? Oh, there’s a massive scroll of Patch Notes! Let’s see, what are this week’s highlights…?

Lovely stuff! Remember, you can see the full Patch Notes for this week’s update here.

We're delighted to announce the last two waves of sign-ups for the RuneScape iOS Closed Beta.

The fourth wave of sign-ups for the RuneScape iOS Closed Beta will go live at 10:00 (BST) on Wednesday May 27th.

The fifth wave of sign-ups for the RuneScape iOS Closed Beta will go live at 17:00 (BST) on Wednesday May 27th.

Once the RuneScape iOS Closed Beta wave is live, a TestFlight link will be shared here: https://info.runescape.com/p/ios-closed-beta.

In order to access the beta, please press the link on an iOS device with TestFlight installed and follow the instructions in the app.

So, what’s the best skill in the game? How about the best NPC? Best boss fight? It’s high time we found the answer to these all-important questions!

The inaugural RuneScape World Cup will see you choosing between RuneScape’s most iconic quests. You can cast your votes on Twitter or Instagram on May 26th. May the best quest win! 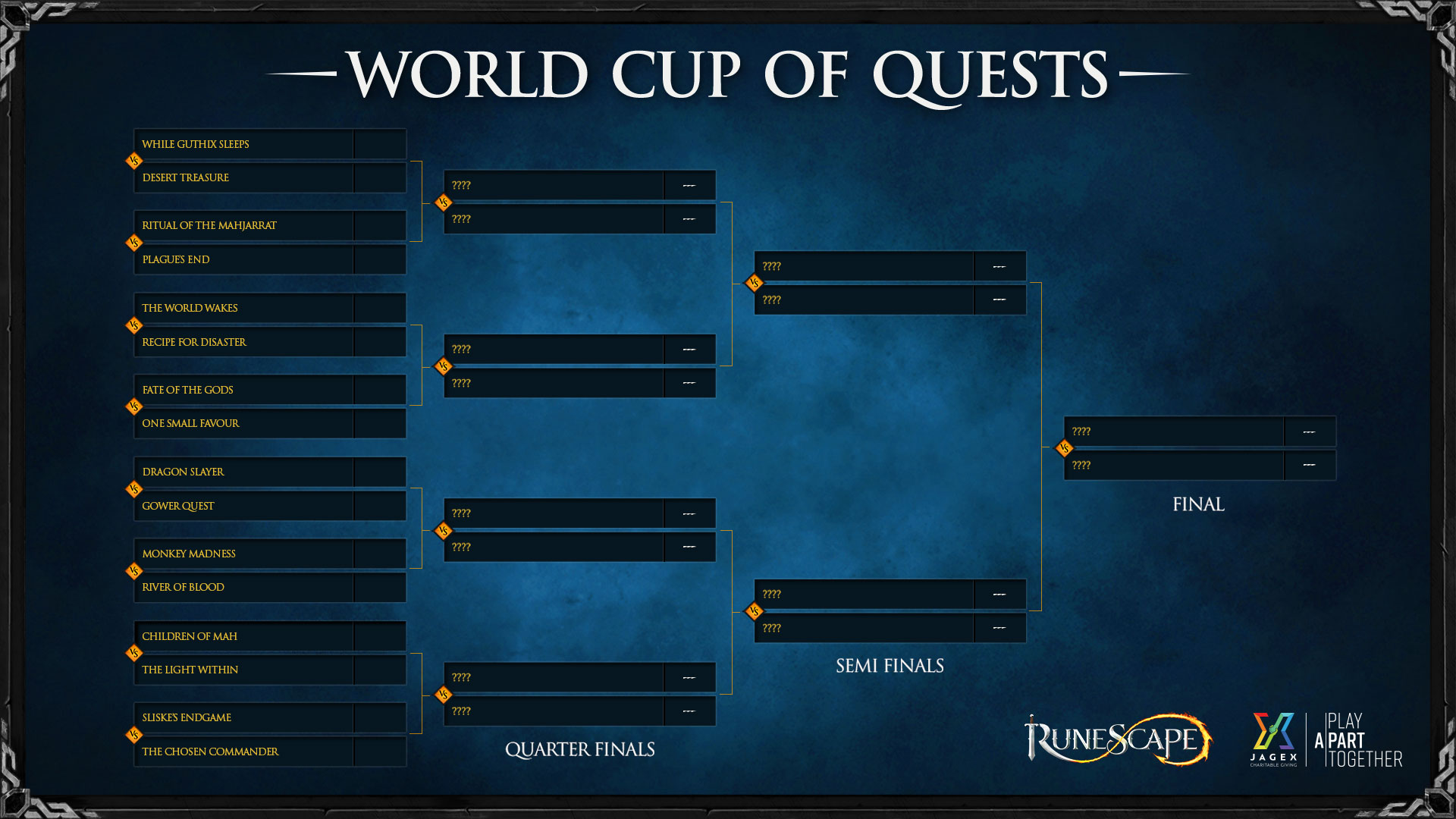 Have you claimed your free 14 days of RuneScape membership from Twitch Prime yet? If not, what are you waiting for?! All you have to do is link your RuneScape and Twitch Prime accounts, and then follow the redemption instructions to get your freebie.

Plus, keep an eye out for next month’s offer, where you can get your hands on a Currency Pack including Treasure Hunter Keys, Hearts of Ice, and RuneCoins!

You can find more info here!

In this livestream you’ll get the chance to enter the Ninja Team’s inner sanctum and learn all about their plans for the next strike.

Mod Stu is back, and this time he’s brought a friend! Join these two time-travelling J-Mods on a nostalgic journey through RuneScape’s early game and learn about the inner workings of tutorials past.

This week's featured streamer is super 'chill' - it's Cryo! He'll be doing a real variety of activities, from Hunter and Archaeology to minigames and bossing. If you're particularly lucky, you might even spot him doing a clue scroll or two in his quest for 1,000 of each casket type.

You can check out their channel here.

Er, hold on, what’s this? A new newspost section? Outrageous. Every week we’ll be highlighting a Forum thread that really stood out from the crowd, and inviting you all to weigh in!

This week’s Forum Spotlight is on Tenebri’s ‘Favourite NPCs’ thread. Are you an Azzanadra stan? Part of the Varrock Stray Dog Protection Squad? A Buddy of Bob (the cat)? Then we want to hear about it!

Have your say here.

The Pink Skirts are an elite legion of volunteers and veteran players, dedicated to hosting the coolest events in Gielinor!

Last week’s Q&A went so well they’ve decided to host a re-run! Join the Pink Skirts outside Varrock West Bank on World 3 at 20:00 on May 25th for a chilled-out chat. Ask your questions, get some answers, and maybe even perform some mass emotes.

You can find more details about the Pink Skirts and their upcoming events here.