The time has come for another Mobile Dev Blog!

Since we last raised the Android beta cap we have been busy looking into the feedback players have provided as well as analysing how players new to RuneScape find the game to play.

This has lead us to the conclusion that, whilst the game is performing well for existing players, if we want to make the most of the influx of new players we will reach via the mobile platform the we need to make some wider changes to the UI.

The reasons for this are two-fold;

So, what does this actually mean? It means that we’re going to be doing a fair bit of work to unify the UI style between Mobile and Desktop. They won’t be exactly the same, as the way players interact with the game on both platforms is different but, the closer the UI on both platforms is, the easier it is to develop content for the game and the easier it is for players to transition from mobile to desktop and vice-versa.

We’re in the process of properly defining what the UI will be, but have made a few small steps towards this end. Where possible we’re going to be making changes that we feel are good for BOTH platforms where possible. A good example of this is the new Worn Inventory interface layout shown below; 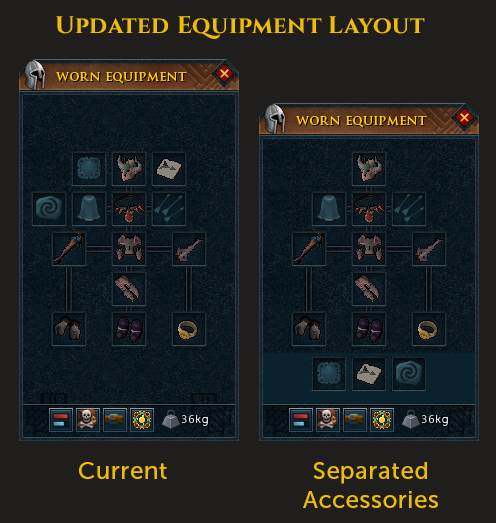 The things we kept in mind when designing the new layout were;

As you can see from the list above for this relatively small change, there are some potential drawbacks. It’s going to be hard to update the UI to please absolutely every single player, but we’re going to be doing our best to make sure that we make holistic changes that are useful to all of our players (new & existing, mobile & desktop) and part of this process is going to involve the community as we reach out to you to get feedback on proposed changes. Expect to be hearing from the Community and Development teams in the near future!

The current buff and debuff bar system wasn't really optimal for mobile, as a result we've taken this opportunity to make the following changes to the system, these will also be visible on desktop

Finally enjoy this glorious view of a resized buff bar and debuff bar to however you want, alongside all of the icons!

We know that there are not enough action bars, so in the spirit of cross-platform we're now giving all users an additional three action bars to use across mobile as well as desktop!

On to the hot topic of betas! We will be aiming to uncap the Android Members beta in the near future so, if you’re a member and have an Android device, you’ll soon be able to play on mobile and not have to worry about getting in before the influx of other interested players.

As for iOS; we are still developing the iOS version but are not in a position to release a beta at this point. We need to work on a few stability issues and then focus on the best way to get it into your hands. However, the way betas are organised on iOS means that we wont be able to run the same kind of beta we did on Android. We know that there are many players eager/frustrated to get their hands on the iOS version, and we’re just as eager to give it to you! Once stability of the iOS version is up to scratch and we’ve come up with the best way to get it to you, expect to hear more.

Mod Liam and the Mobile Team
Back to top