See, we were under the impression that Ninjas were characteristically elusive. Rarely seen, but generally deadly. And while indeed RuneScape's Ninja Team has proved especially lethal with its weapon of choice (the keyboard), they are far from elusive. In fact, they're everywhere! And this week, they've struck AGAIN! Saying that, we understand their eagerness – it is Double XP LIVE this weekend, after all.

The Ninjas have plucked their very finest yumi and kusarigama from the weapon racks and performed a number of quite devastating and methodical strikes designed to make the upcoming Double XP LIVE event even better.

We all want to make the most of our extra XP, right? And that can sometimes make the downtime between grinding feel a little wasteful. But waste no more thanks to the introduction of a timer toggle!

Players can now hit pause on their 48 hour Double XP entitlement whenever they wish, meaning they can safely go about preparing for their next skilling marathon without their bonus time whittling away.

Tread carefully, however – after toggle you will not be able to change it again for another hour. So think ahead!

Pauses are indefinite and persists across log-ins, but if the Double XP time remaining is equal or greater than the amount of time left in the event, your pause will be deactivated. Your Double XP timer will no longer disappear after you've used up all of your Double XP entitlement.

Previously, players would have to use each size of Protean Resource individually. A bit too click-tastic for our tastes.

Now, however, portable skilling packs, protean packs, and skilling dummy crates now stack in the inventory with other packs of the same type and size. There's also a new 'Use All' checkbox on the interface. Essentially, being able to use all your Protean Packs at once means less time clicking and more time skilling!

There are plenty of other improvements too:

These options will still adhere to the two hour protean powerups time limit.

In addition, Protean Packs, Portable Stations and Dummies can now be stacked. As they'll no longer take up individual spaces in the Inventory, that means less trudging back and forth to the Bank!

Previously, it was difficult to determine the amount of time left on a portable, which in turn made planning skilling activities around them a little tricky. It was also difficult to say thanks to players who operated or extended the portables, making it feel like a bit of a thankless task as opposed to the community-oriented activity it was intended to be.

So, the examine text for Portable Stations will now include the time remaining, the owner's in-game name, and the in-game name of the last person to extend the timer. Furthermore, should you attempt to place a portable skilling station somewhere with one of the same kind is already nearby, a prompt will now ask if you'd like to extend the existing one instead. Station extension failure messaging has also been improved.

The Melee, Magic, and Ranged combat dummies have now been combined into a single, all-purpose combat dummy!

When used, the player will be asked which kind of dummy they'd like to deploy. Skilling dummies of the same type also now stack in the inventory. Plus, dummies can now be placed just one tile apart as opposed to three.

A lot more convenient, we're sure you agree.

There are now an additional eight areas which will simply hide your companions:

We've got some news about changes to Treasure Hunter, starting with the return of Time To Train starting on August 4th!

For all you Treasure Hunters out there, you know that our promotions currently rotate in and out regularly, with some (like Second Chance Tuesdays) lasting only one day.

Throughout August and September, we'll be switching up our approach to promotions to try something new. During both months, each promotion that goes live will run uninterrupted for two weeks.

In order to keep things fresh, we'll be mixing up rewards or mechanics during the run-time of these two week promotions (including some brand new rewards and the return of some golden oldies!).

In November of last year, we talked about improving Treasure Hunter with more transparency and experimentation with new mechanics. This prompted a number of new promotion designs eg. Ring of Shards and Diamond Dozen earlier this year.

Our next port of call is to examine the ways we keep Treasure Hunter interesting week-to-week, and experiment with new ideas on how to approach that challenge. With this trial, we want to take the focus off a shorter time limit on promotions, and instead focus on the appeal of refreshed rewards and mechanics.

This will be starting this week with Time to Train running from Tuesday August 4th until Monday August 17th. We're very keen to hear from players about how this change feels for you, so drop us your thoughts using the Discuss button below.

As if it were not obvious from all of the above, Double XP LIVE returns this weekend! Kicking off on August 7th 12:00 Game Time, everyone will have 10 days to use their 48 hours of Double XP however they wish. And with the new timer, you've got more control than ever. Remember, Archaeology is excluded from Double XP LIVE for now. A complete list of the various rules and exclusions can be found here.

Also, don't forget to check out our brand new quest, Desperate Measures. The latest chapter in the epic Elder Gods saga has grave implications for Gielinor…

Lastly, it's the final week of The Beach, so brush off that towel, apply the sunblock and get down to Lumbridge Crater.

As always, we hugely value all of your feedback on anything and everything RuneScape. Get in touch on Twitter, Facebook, Reddit, Discord or over on our Forums. Your feedback will help us guide future of the game we all love.

We have another bumper list of tweaks, changes and fixes for you this week. It's almost as if the game is nearly two decades old and there's a never-ending list of things to do!

No typos were ficksd this week

Here's some hotfixes that made it to the game last week.

While most of us have been busy sinking our teeth into RuneScape's latest and greatest quest, Desperate Measures, @AnaelicCosplay has risen to the challenge of making her very own version of Thok's iconic Stick! The best part? She's shared an exclusive guide and a collection of downloadables that you can use to make one for yourself! 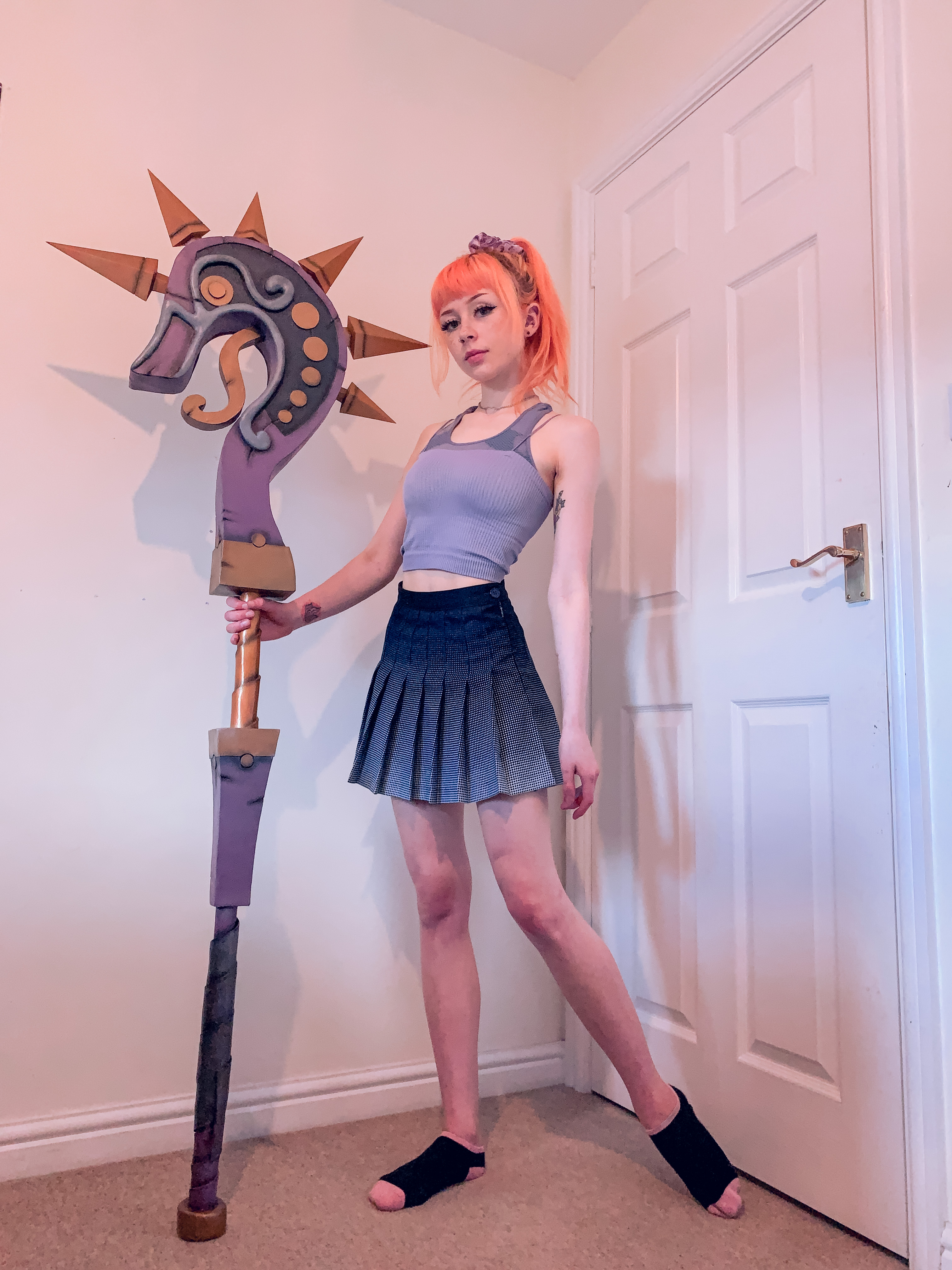 If you fancy yourself a piece of this amazingness you can find a full guide to making Thok's Stick here, as well as some 3D printable spikes (available in small, medium and large).

'Desperate Measures' raised plenty of interesting questions about [REDACTED], [SPOILERS] and [NOPE, NOT TELLING] – so if you're interested in hearing the answers, pop along to this Lore Q&A stream, where the Lore Council will be in attendance to dish out some knowledge.

The dynamic duo has become a trio this week, as Mod Jack joins the team to play through the Troll Warzone tutorial.

Catch all of our livestreams over on the official RuneScape Twitch channel.

Our featured streamer this week is Vaselinefairy, who'll be training a little bit of Archaeology to begin with, and then opening up a cache of tetracompasses once we're all warmed up.

You can join the fun on August 3rd at 17:00 Game Time on their Twitch channel.

Fancy your very own personalised Twitter banner, featuring some Desperate Measures key art? We really, really hope so, because that's what we've got for you!

Full details will be made available in a tweet later this week – keep your eyes on the official Twitter if you want in!

This week we'd like to offer our congratulations to @Shaddowgattler, who just obtained a Fire Cape on an account with only 9HP! You're a braver adventurer than we are, friend. 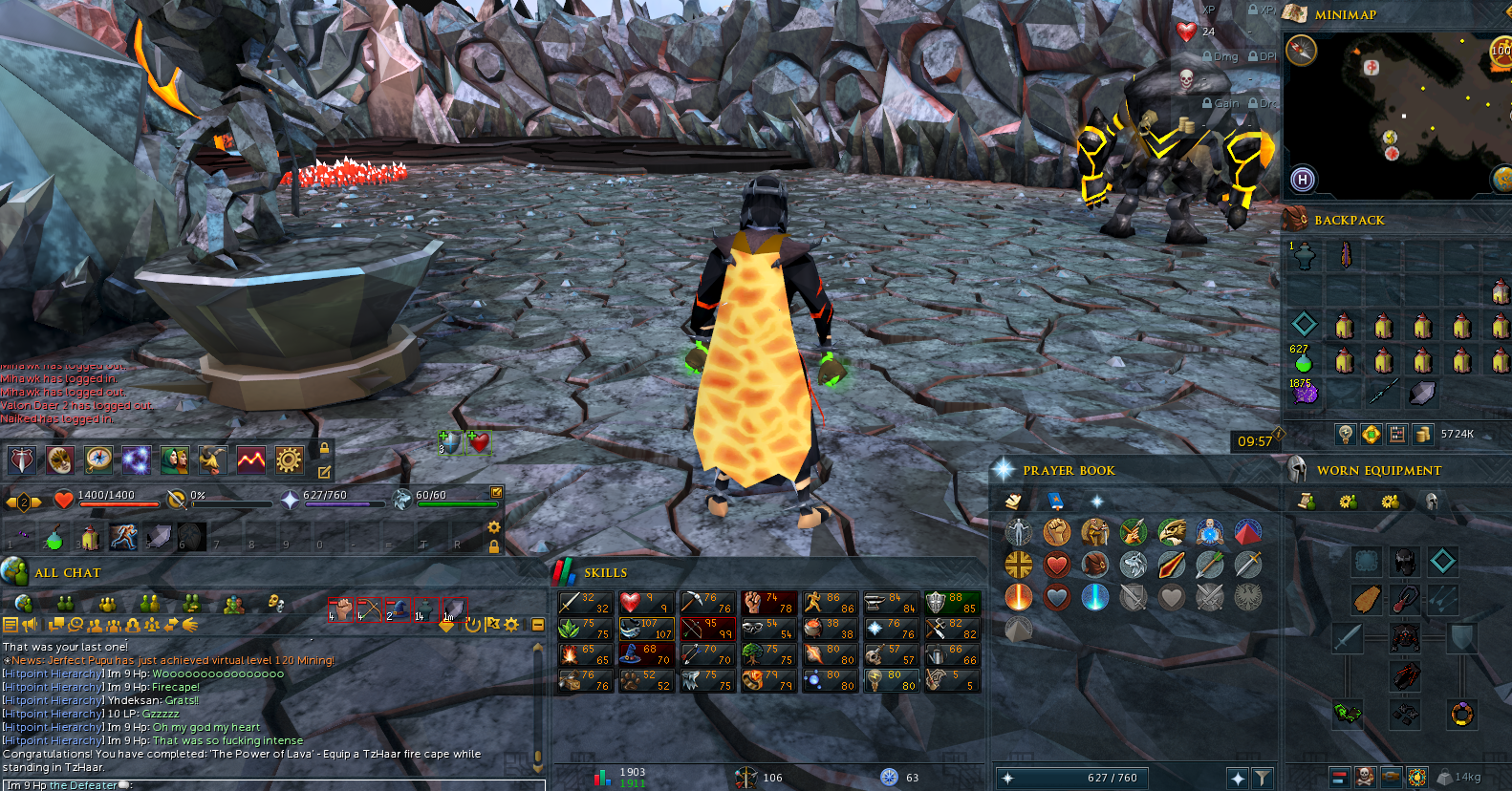 We also loved this screenshot by @RS_Zorander! It reminded us of all the wonderful journeys we've taken in Gielinor.

This week we're obsessed with the latest chapter of Chaos_Elemental's fanfic, A Hard Fall. This story's got everything – romance, violence, choc-ice, vulgar exotic birds, fourth wall breaks and more!

If you feel like flexing those literary muscles then grab your reading glasses and head on over to AO3. Over 40 chapters of compelling fiction awaits!

If you'd like to relive the magic of Desperate Measures one more time, you can't do better than this Let's Play by OrbScape. He's full of enthusiasm and shows of plenty of details you might have missed – so go on, give it a watch!

Each week we plunder the depths of the forum to bring you a tantalizing thread to chew on. If you've been playing our latest quest, you might just find today's discussion piquing your curiosity.

Half Centaur is inviting you to ruminate on Desperate Measures, and what implications the quest could have on the world of RuneScape as we know it. Our lips are sealed, but if you've completed the quest and fancy joining the conversation you can get involved here.

This week the Pink Skirts have the leader of Saradomin's army in their sights, the fearsome Commander Zilyana.

Join Philly PD and Sharna in the God Wars Dungeon (Sara Lobby) this Tuesday August 4th at 23.00 Game Time on World 68. If you're lucky you might even net yourself some Saradomin goodies along the way!