This week in RuneScape, weĺre going absolutely loony for the Lunar Spellbook, playing with Penguins and setting out on a Yak Track! Read on for all the detailsů

Kerapac Track - 17.45 BST, 21/09/20: We are aware of an issue impacting some users that can cause a crash when opening the latest Yak Track event. The team are investigating the situation and aim to implement a fix as soon as possible tomorrow.

We donĺt know what the Ninjas have been learning in that Dojo of theirs, but this week theyĺve been slinging spells as well as shuriken! Letĺs take a look at their work on the Lunar Spellbook.

To kick things off, the Ninjas have worked with the Moon Clanĺs finest mages to create four new Lunar Spells. If youĺve already got the Lunar Spellbook unlocked, these will be available to you as soon as you get the required Magic levels.

This nifty sifting spell will allow to you screen soil accrued during your archaeological adventures without trudging back to the Archaeology Guild to use the Screening Station.

Arenĺt you tired of nearly putting your back out bending down to pick up traps every five seconds? Well, weĺve got just the spell for you! Trap Telekinesis will allow you to reset your Hunter traps without you even having to move. 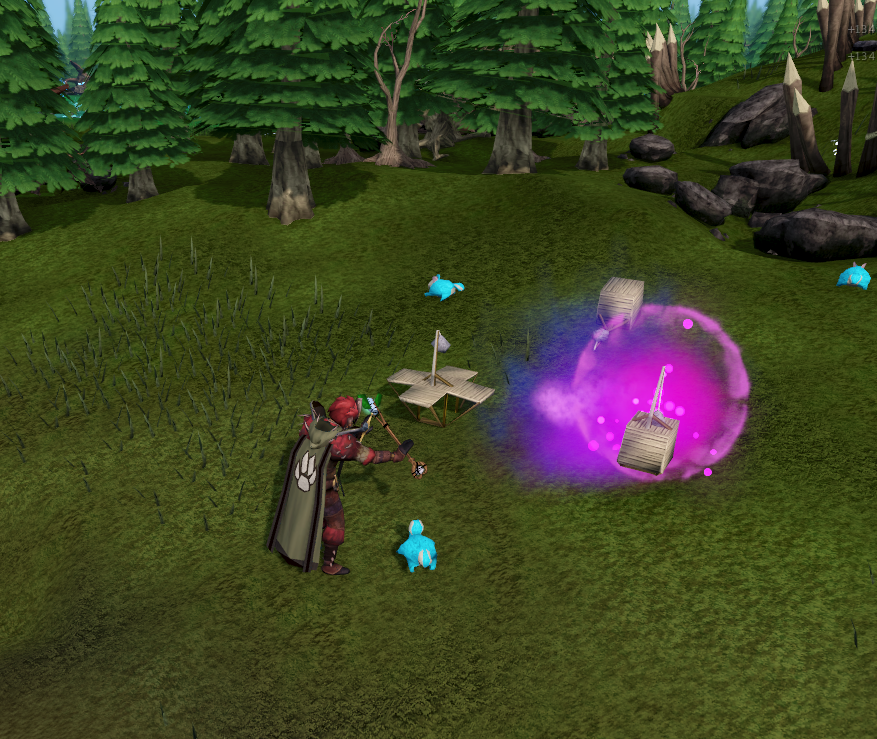 This spell does exactly what it says on the tin - it lets you fire decorated and infernal urns without the need for a pottery oven. After that just pop in your runes and your urns are good to go! 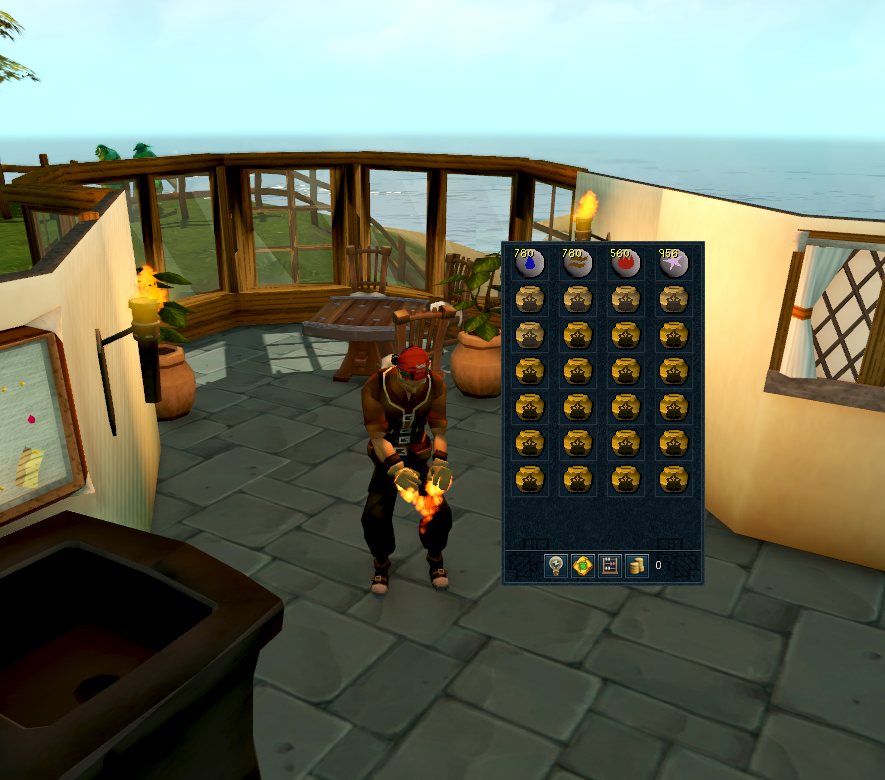 No, itĺs not a skate trick. This gnarly spell will let you grind anything you could grind with a pestle and mortar using nothing but your MIND! It works on up to 60 items at once. Aside from being a great icebreaker at parties, this spell will also help you train Herblore.

Those of you who own a lectern for your Player Owned House will now also be able to craft teleport tablets for all the Lunar Teleport spells. Happy travels! 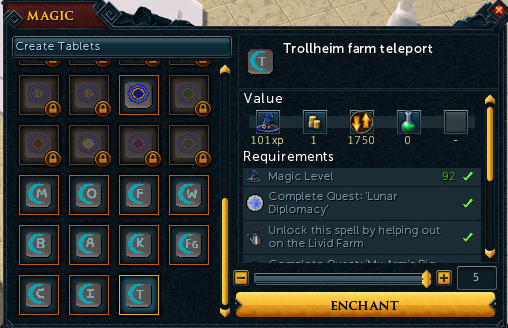 Now on to the main bulk of this weekĺs update: improving the older spells!

The Remote Farm interface has been completely overhauled to be more usable, readable, and user friendly.

As you can see, patches are now separated by category for easier navigation, and some of them indicate the compass direction they face in. Rather excitingly, the interface now includes the Tuai Leit berry patches, as well as the Money Tree patch.

Youĺll also notice that different patch states are now colour-coded, so you can tell at a glance which of your veggies are in need of some Plant Cure.

Keen farmers will be especially overjoyed to find that they are now able to cast the Fertile Soil spell via this same interface, leaving them with more time to get on with weeding and whatnot.

Finally, those speedy Ninjas have deftly cut down on the amount of time it takes to actually open the interface after casting the spell.

Well, those are the highlights! For a full list of this strikeĺs tweaks and changes, be sure to check out the Patch Notes tab. See you there!

Make Leather will now tan all hides of the same type in your backpack at once, without having to cast the spell multiple times. Accordingly, youĺll notice that this spell no longer uses the Make-x system.

Now you can cast this spell on banite rocks to mine monster-specific ore directly from the rock! To do so, youĺll need an item related to the type of bane ore youĺre after, either in your backpack or mounted on the wall of your Player Owned House. This spell will be applied to every banite rock in the area for precisely two minutes. The appropriate runes will be consumed each time you mine an ore. Boosts and buffs such as those associated with Signs of the Porter or Juju Potions will work.

Of course, should you prefer to do things the old-fashioned way, the spell still retains its original function.

The grammar might be dodgy but Superglass Make is now more useful than ever, granting you the mystical ability to turn crystal-flecked sandstone and red sandstone into crystal and robust glass at the click of a button, provided that youĺve completed ĹAs a First Resortĺ.

Youĺll also notice that the previous spell icon has been replaced with something a bit more illustrative, and the tooltip now specifies that the spell has a chance to create extra pieces of molten glass.

Lastly, weĺve removed the movement/action delay that occurred after casting Superglass Make, which should make getting on with things a bit easier!

Yak Track is back and this time it's brimming with DRAGONKIN! Venture onto a brand new track featuring dragonkin-themed cosmetic rewards to earn and, for the first time ever, Lore Tasks!

Never played Yak Track before? No worries! Hereĺs the rundown:

From today until November 2nd, when you log in youĺll be presented with a list of tasks. For each one you complete, youĺll advance a step on the Yak Track and earn yourself a prize!

Although the prizes on the free Yak Track are obtainable by everyone, if you purchase a Premier Pass you can unlock even better rewards, including your very own Mechanayak friend! If youĺre not ready to commit up front, youĺre free to wait until youĺve got into the swing of things, because the Premier Pass unlocks all the rewards from every tier youĺve passed so far.

To get started with the Kerapac Track, make your way to Burthorpe where youĺll see the Mechanayak waiting for you. Have a word with him and heĺll set you off on your journey!

Since this Yak Track is so entwined with the Elder Gods Storyline, we thought you might enjoy completing some tasks that will bring you closer to the lore. When you complete these tasks, you wonĺt just get a sweet item for your collection ľ youĺll also get to learn more about characters like Hannibus, Thok and Charos.

And donĺt worry ľ if you find yourself unable to complete these tasks before the Kerapac Track closes on November 2nd, youĺll still be able to revisit all the lore tasks after the fact, without missing out on any of the juicy details.

Now, shall we take a look at those rewards?

The Kerapac Track is jam-packed with rewards inspired by the dragonkin and the Elder Gods storyline. Hereĺs a sneak preview of just a few of them.

Tired of fuzzy yaks moulting all over your stuff? Then the Mechanayak is the guy for you! Youĺll get to take him home at Tier 50 of the Premium Track.

Starting from Tier 6, you can receive Thokĺs Hand-Me-Down weapons and armour parts. Can you collect the full set?

This awesome dragonkin-inspired armour unlocks at Tier 50 of the Premium Track. Do you have what it takes to claim it for yourself?

At Tier 10 of the Premium Track, youĺll unlock this adorably tough lilĺ guy. Lock up your carrots!

Commander Scampers was one of Kerapacĺs most devious experiments, but heĺs promised us heĺll be on his best behaviour from here on out. This cute but by no means cuddly fella can be yours at Tier 40 of the Premium Track!

We know you love watching your favourite streamers play through the Yak Tracks, and so this time around weĺve decided to spice things up!

From now until November 2nd you can tune in on Twitch to watch our crack team of content creators race to complete the Kerapac Track. When they reach specific milestones, theyĺll be rewarded with Bonds, plus all the other awesome rewards from the Track itself to give to their viewers!

Tune in to the following streamers to get involved:

Oh, and did we mention? The top streamer at the end of the race wins the chance to take home their very own real-life Mechanayak!

The Kerapac Track closes for visitors on November 2nd, 2020. Why not log in now and see which prizes youĺd like to aim for?

Last Friday we announced the finalists for almost every category of the 10th Annual Golden Gnome Awards!

If you missed the livestream, you can relive the magic right here. Remember, the Best Costume and Best Cosplay Prop finalists will be announced soon.

Now all thatĺs left is for you to head to this page this page and vote for the winners. Choose your favourites in each category, and they might just take home a Golden Gnome!

Weĺd like to apologise for a few issues we encountered during last weekĺs Prime Gaming launch. Theyĺve now been resolved, and thereĺs still plenty of time left to claim your seven days of free RuneScape membership.

To do so, simply follow the instructions on this page - see you in Gielinor!

The Ninjas have been up to some new tricks this week, with a host of changes to the Lunar Spellbook.

Itĺs all go in this weekĺs Community Tab! Weĺre hunting down penguins, diving off rooftops, and whipping up some Gielinorian cuisine. Letĺs take a look.

Join Mod Poerkie on an epic quest to find Mods Niku and Kari, who are disguised as penguins and hiding somewhere in-game! If youĺre particularly sharp-eyed, you might even get the chance to win an adoption pack for the gentoo penguins at Edinburgh Zoo. For more details on that, check last weekĺs newspost!

Hey, whatĺs this about? Anyone?

Hm. It seems like weĺve got a mysterious announcement on our hands. Youĺll just have to tune in to the livestream to find out moreů

Our featured streamer this week is CasualTBag, whoĺll be gearing up for a real variety stream this Tuesday, September 22nd at 06:30 Game Time. Thereĺll be group masses, fashionscape, dice of death, a treasure hunt and even a bit of hide and seek! If youĺre lucky you might just take away a few gold piecesů

Catch all the action on CasualTBagĺs Twitch channel!

The Pre-First Age of RuneScape (A Short Film)<


TheBookOfRS impressed us all this week with this fantastic short film about the events prior to the First Age. What was the universe like before Guthix landed on Gielinor? Nowĺs your chance to find out! We highly recommend giving it a listen while youĺre chilling out with some Yak Track tasks. 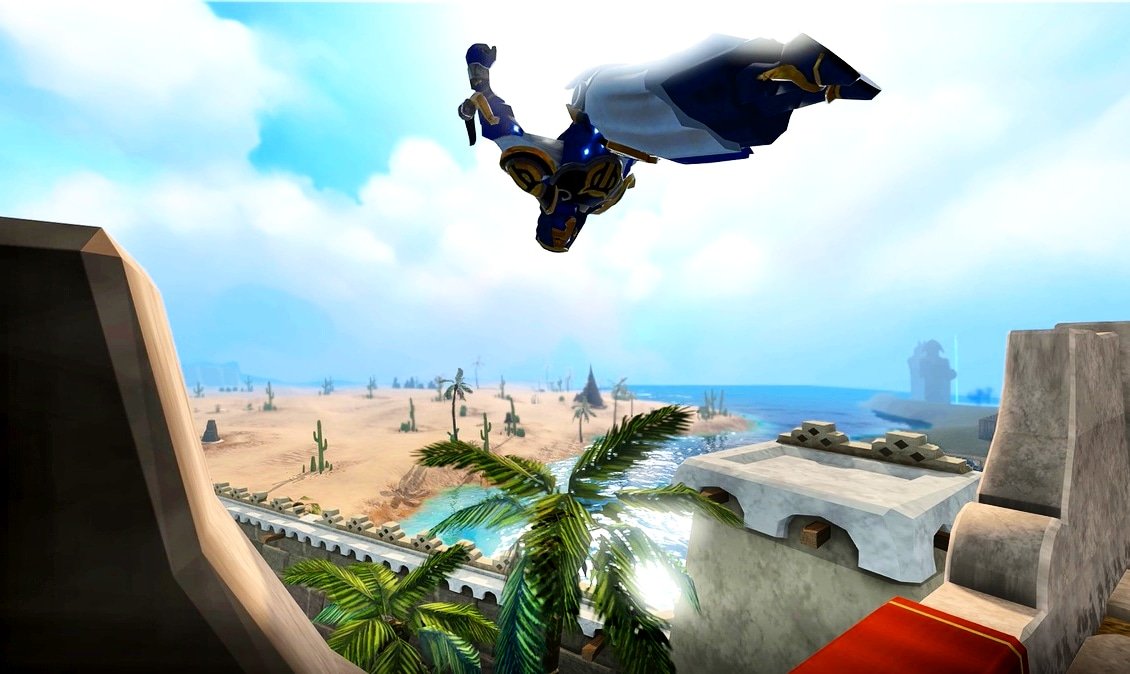 Toeesĺ had to be pretty agile to grab this action shot, but it all paid off, because we think itĺs fantastic! Now, if youĺll excuse us, we have a haystack to dive into.

During last monthĺs Pub Quiz, Mod JD challenged all-star chef The Cooks Assistant to whip up some Gielinorian grub using a very specific shopping list. Weĺre happy to announce that he met the challenge with great gusto, and created something truly tasty! Watch the video to see the results for yourself:

This weekĺs Featured Forum Thread is a place where Clan Leaders can hang out together and talk everything, um, Clan Leadership. If thatĺs you, why not fill out the application and make some new friends? And if itĺs not you, maybe nowĺs the time to grab a few mates and start the Clan youĺve always dreamed ofů

Speaking of friends, our friends the Pink Skirts are at it again this week with a Commander Zilyana Hardmode Boss Mass! Meet leaders M e r c y and Dung Titan in the Saradomin God Wars Dungeon Area on World 35 this Saturday, September 26th, at 13:00 Game Time to get in on the action.

For more information, add Dung Titan to your Friendsĺ Chat or check out the full details here.