Treasure Hunter is playing host to a vampyre-themed event this week. Unlock pieces of the vampyre hunter outfit, a weapon override, and a special amulet with up to four toothsome effects. Read on for the details!

From 21st April at 00:00 UTC until 25th April at 23:59 UTC*, head to Treasure Hunter and get your hands on feral vampyre fangs. They come in packs of 80, 160 and 320 and will be collected in your brand-new currency pouch. The pouch saves space in your inventory by acting as a new depository for all future Treasure Hunter currencies, so put it to good use!

You can also earn feral vampyre fangs by doing the following activities in and around Morytania:

Use your collected fangs to unlock pieces of the fantastically dashing vampyre hunter outfit and its accompanying stake launcher weapon override. 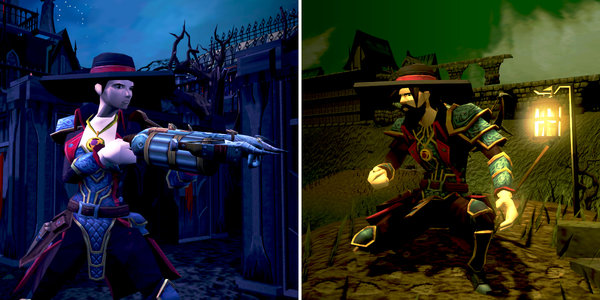 If gothing it up isn’t enough, when you have completed the outfit you can use your remaining fangs to unlock a special wearable amulet that gives the following effects when you level it up by feeding it more feral vampyre fangs:

Note - you will be able to use fangs up until the 9th May in order to push for those amulet levels. 25 feral vampyre fangs are equal to 1 charge. Fangs are also tradeable.

Ironmen Note - Ironmen are able to unlock and wear the amulet but will not receive any of its benefits and cannot upgrade it.

Here’s something to sink your teeth into while getting ready for River of Blood – enjoy!