TWIR - Violet is Blue Too, Yak Track And More!

Can you believe it's our last This Week In RuneScape of the year? And what a year it's been! From War's Retreat to Raksha, with a quick detour through Archaeology, we've had loads of great updates - with many more to come in 2021. But first, let's take a look at what's happening this week, shall we?

It's Chriiiiiiistmaaaaaas! The snow is falling, the lights are twinkling, and we've got a few suitably festive updates for you! Read on to see how you can rejoin Violet in the Land of Snow, search Diango's storage on mobile, and get started on a wintery new Yak Track.

Violet is Blue Too

Last time you met Violet, you helped her find the way to Yeti Town and make some new friends. Now everyone's favourite ragamuffin is back, and she needs your help once again!

It's almost Christmas, and Yeti Town should be festooned with tinsel, lights, and baubles - but the whole place has remained dismally undecorated! It's up to you to help Violet get to the bottom of this merry mystery and save the day.

And if you're too busy delivering presents and scoffing mince pies this holiday season, no worries - like the first quest in the series, Violet is Blue Too will be available to play all year, every year from now on.

Speak to Postie Pete outside the portal on White Wolf Mountain to begin the quest.

Yak Track: The Knight Before Christmas

'Twas the night before Christmas, and all through the house, not a creature was stirring... apart from those bloody great yaks tracking all over the place!

Yes, there's a new Yak Track for the festive season, and it's running from December 14th to January 24th. New here? No worries: to get yak tracking, head to Burthorpe and have a word with Robin, the Reindeer Yak. He'll set you up with a list of tasks to complete, which range from the silly to the skilful. There are two tasks to choose from at each tier, so you choose whichever suits your playstyle best. For each task you check off the list you'll receive a festive reward! 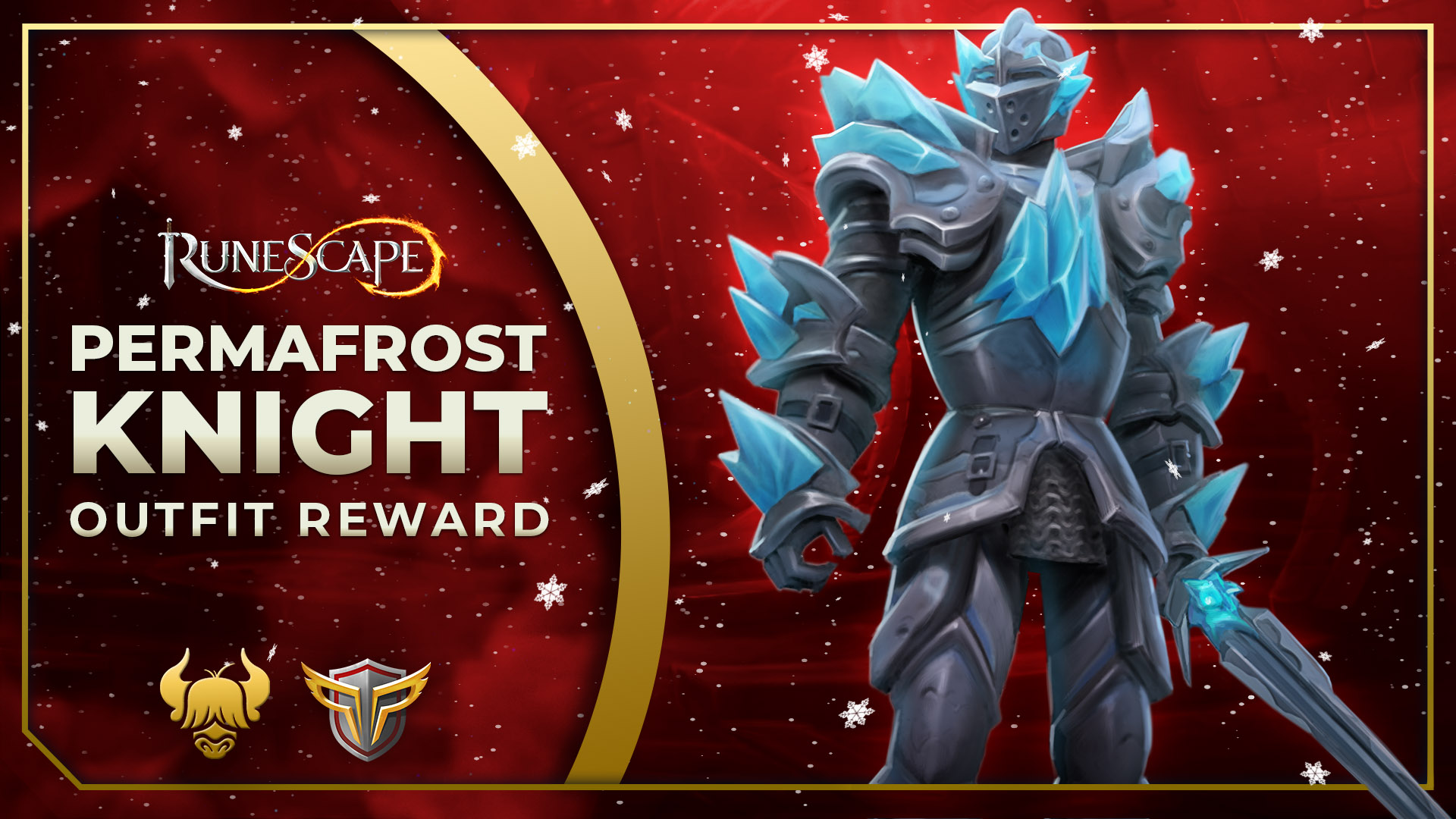 Speaking of rewards, for completing your very first task you'll get the Permafrost Knight outfit, a super-cool suit of armour that'll let you give Gielinor's toughest baddies a frosty reception. Carry on along the track and you'll get weapons to match, along with Robin the Reindeer Yak in pet form, a Chimney Teleport and much more. 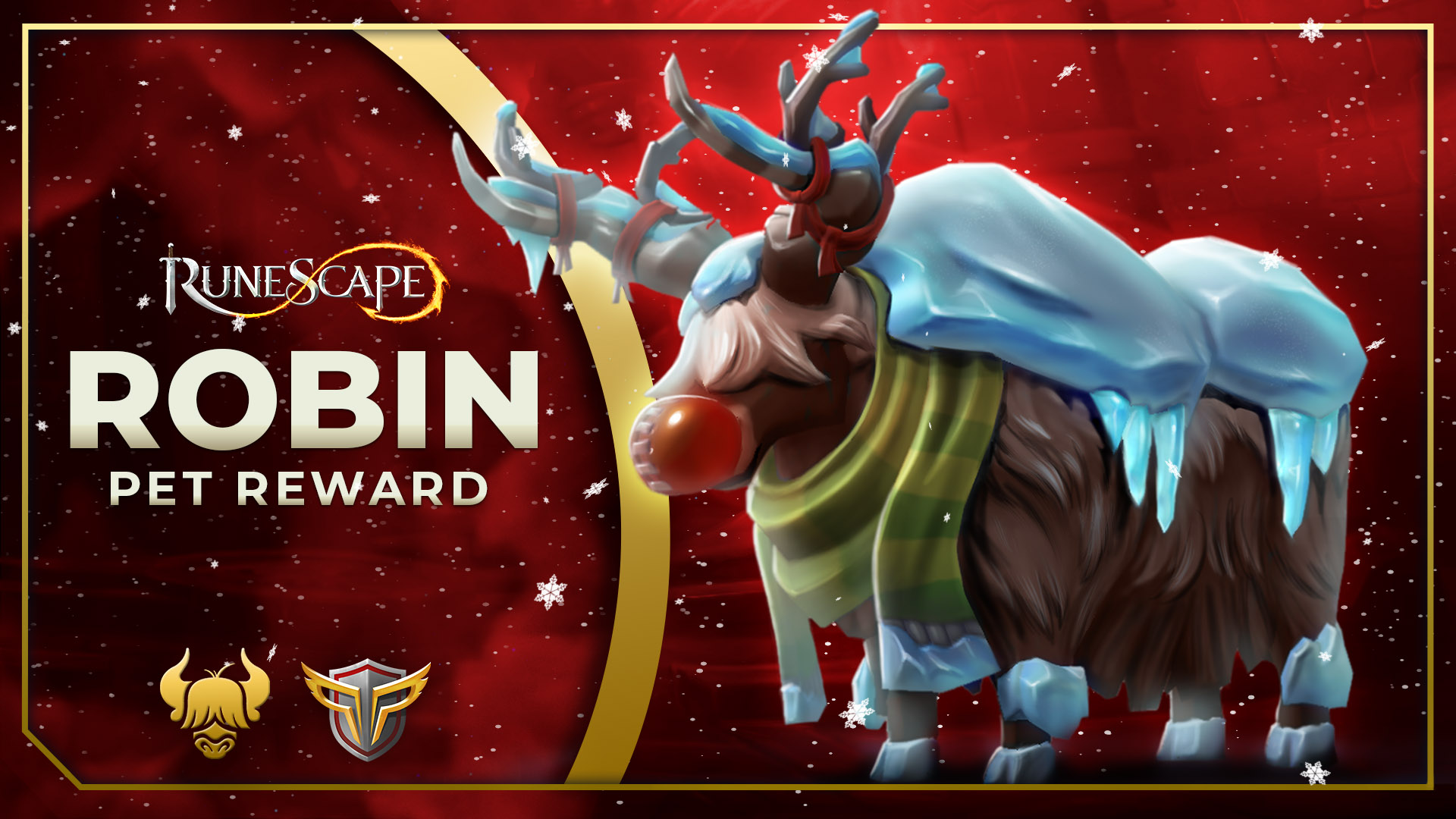 Treat yourself to a Premier Pass for just 2 Bonds and you'll unlock even more cosmetics, boosts, pets and animations: including the Tundral Stalker outfit and Snowflake, the winter fairy pet at Tier 50.


Don't forget - if you've joined the Premier Club, you'll have free access to the Premium Track, and you'll get a cheeky bonus Task Skip for any that aren't to your liking.

This time around, you'll be asked to complete a special holiday task: the present hunt! It seems that yaks aren't very good sleigh animals, and somehow Robin's lost some of the presents he was supposed to deliver. Thankfully, he's got a set of Magical Jingle Bells that will help you detect the presents he's lost - just give them a shake and they'll let you know how close you are to the nearest lost present. Easy peasy!

Lastly, our developer elves have received your wishlists and have been busy making a whole bunch of Quality of Life changes to the Yak Track. For more information, have a look at the Patch Notes!

You can find Diango in Draynor Market, tirelessly handing out rewards from holiday events past - but this year, he's the one getting the gifts! The Ninja Team has paid him a visit and spruced up his UI. Plus, while they were in the area, they paid a little visit to Death's Office and arranged for him to award a new title...

First off, Diango's messaging has been improved in order to clear up any confusion players may have had about the whereabouts of items they already own. In addition, his UI has been given a bit of polish on both mobile and desktop, with bigger icons and a more accessible Search Bar.

Speaking of Search Bars, the one in the Bank will now display items you've got stored with Diango, provided you can withdraw them to your Backpack. There's also a new keybind which will activate the search while in Diango's interface; the key is 'S' in English and German, 'B' in Portuguese and 'R' in French.

The Ninjas teamed up with Mods Ryan and Iago, and Death is now ready to award boss loot collectors who go the extra mile with a shiny new title. Completing all boss collection logs will now earn you a prestigious golden variant of 'the Reaper' title. Nice!

In addition, the Ninjas have swept through the following small updates:

Upon logging in after this update, you'll receive a mysterious invitation. An invitation to what, you ask? Why, to RuneScape's 20th Anniversary Party!

That's right, we've had this show on the road for 20 whole years. From the good old days of baking cakes for the Duke of Lumbridge, to facing the Elder Gods themselves, you've stuck with us through thick and thin - and since we couldn't do any of this without the support of our wonderful community, it's only fair that we invite you along to our Grand Party!

So don't be alarmed by that unusual envelope in your Backpack - just hold onto it, and look forward to some official party business in the new year! 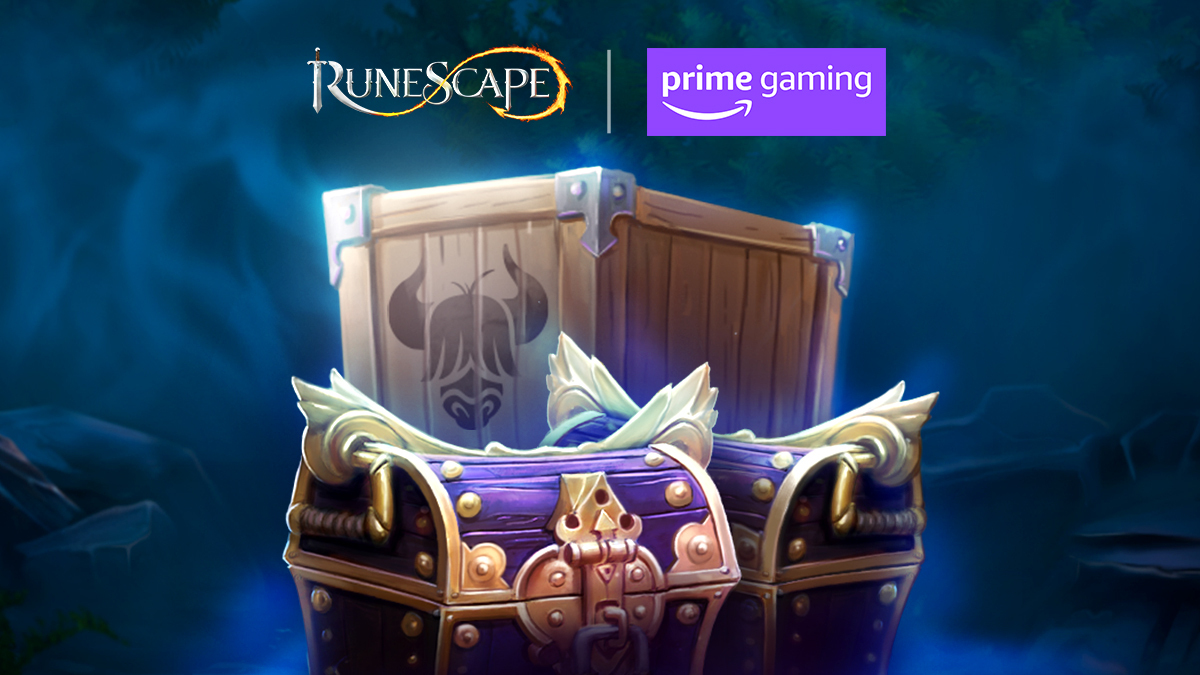 From tomorrow, December 15th, you can claim new goodies from our friends at Prime Gaming! This time, we're offering two Umbral Chests and a Yak Track Care Package, which contains an assortment of useful items that'll help you along the Yak Track.

To get your rewards, all you need to do is link your RuneScape and Prime Gaming accounts. You can find full instructions right here.

If you're part of the Premier Club, you can look forward to a new monthly drop on January 1st! This time, you'll get:

Feeling jealous? There's still time for you to pick up a Premier Club package and get access to monthly drops like this one for the duration - and don't forget, you'll save a bundle on membership at the same time.

Here in the United Kingdom we take our January sales very seriously, so of course we're bringing the thrill of finding those elusive savings to Solomon's General Store!

There are discounts on all kinds of cosmetics, pets, packs and animations - including Rory the Reindeer, the Pegasus Teleport and the Assassin Pack.

The sale goes live on January 1st - but don't worry, we'll remind you closer to the time.

Hmm, what's this under the tree? Oh! It's a big ol' pile of Patch Notes, and they're addressed to all of you! Go on, have a read...

We're always paying close attention to your feedback to determine how we can make our content better, and Yak Track is no exception! Here's a few of the changes and fixes we've made this time:

Present Hunt (This Track Only)

A new kind of task where you're asked to track down presents all over Gielinor using a set of Magical Jingle Bells.

A new type of combat task that'll see you killing bosses and collecting Marks of War.

There is a known issue with the Snuffles pet unlock that will cause his animation to appear deformed. We're working on a fix that requires an engine update, currently targeted for January. We'll share more news as soon as we can.

We're feeling particularly merry in the Community Tab this week, with a Festive Bumper Stream, an epic LootScape weekend event, and more goodies than we can possibly fit in our stockings - so here they are in newspost form, instead.

Welcome one and all to this absolutely massive end of year livestream! Our J-Mods will be playing through Violet is Blue Too, making Christmas cards, and getting up to all kinds of holiday shenanigans. Don't miss out!

Catch our final livestream of the year on our Twitch channel, here.

It's a LootScape extravaganza this weekend as content creators from all over the stratosphere join forces to bring you three whole days of streaming fun!

This'll be your last chance to join a LootScape stream for some time, as we're working with Twitch to improve LootScape in the new year.

From Friday 18th through to Sunday 20th, you'll be able to claim loot from the following streams. You'll get one piece of loot for every stream you watch - so be sure to tune in as often as you can! 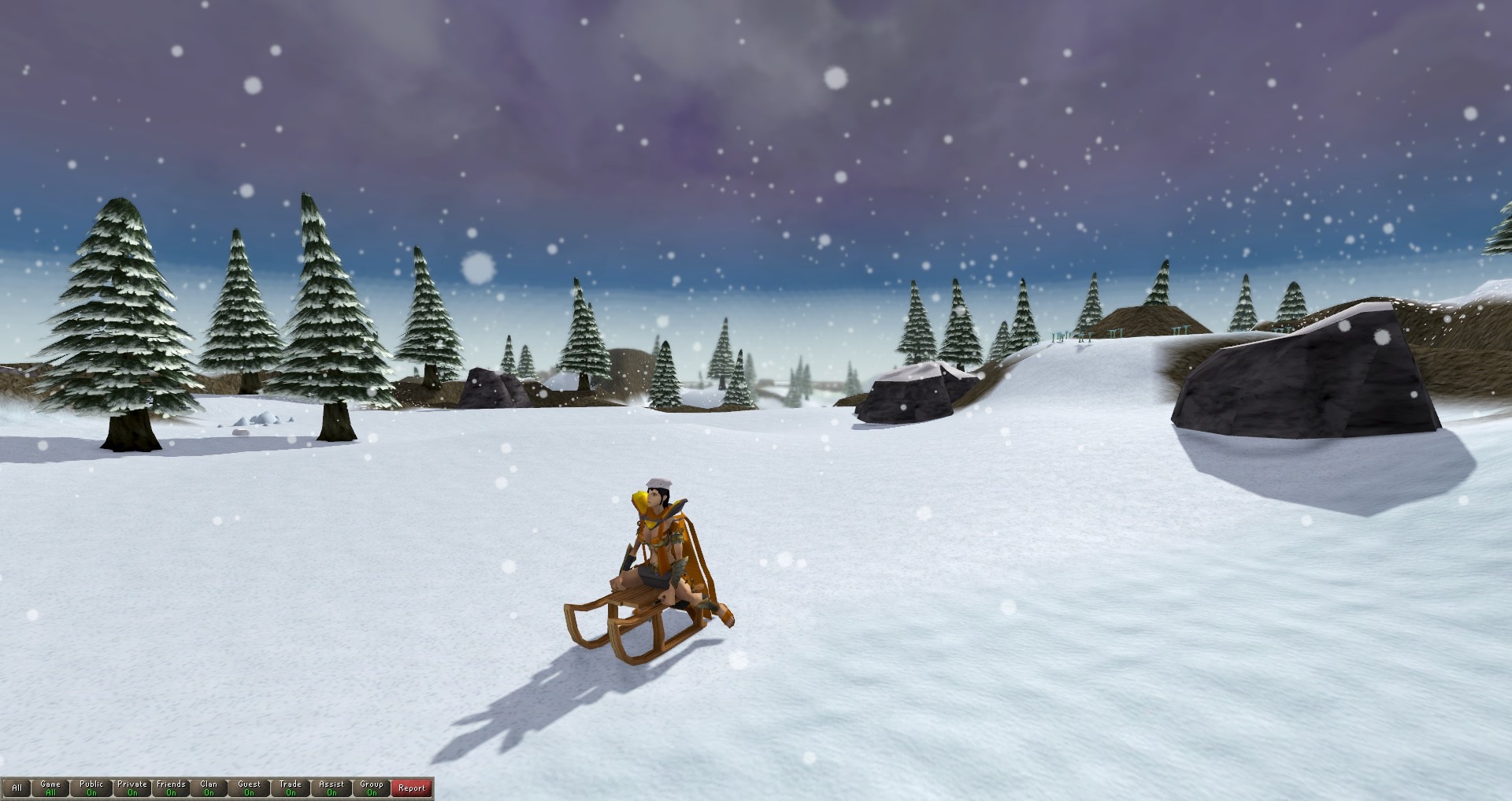 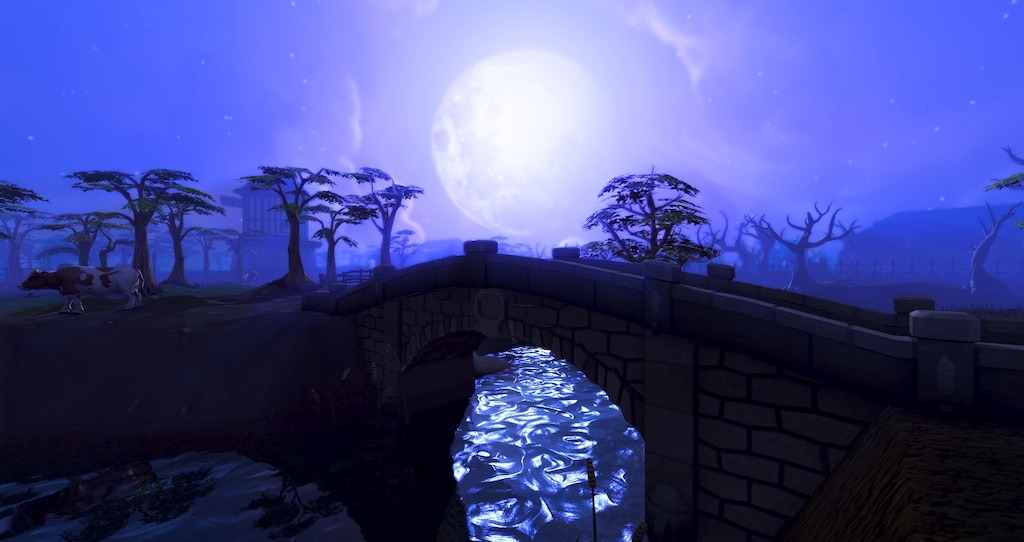 Yikes! We're having a nightmare before Christmas thanks to Nina_Ray and this terrifying piece of artwork, titled 'Monster of Draynor Village'. Brr... it'll take more than a few eggnogs to get over this one. Keep up the good work!

In our reading corner this week we're really into Spirited Away, a fanfic where you choose the ending! Chaos_Elemental and fennfics have really outdone themselves with this one! We'd love to tell you how great the endings are - but we keep getting bested in a highly inadvisable duel. Still worth a read!

Thanks to everyone who took part in the in-game cosplay competition we launched two weeks ago - and thanks to the mysterious 'Mage Simpson' who inspired us to make it TV and movie themed!

There's been some truly fantastic entries, but here are some of our favourites: can you name the characters they're dressed as? 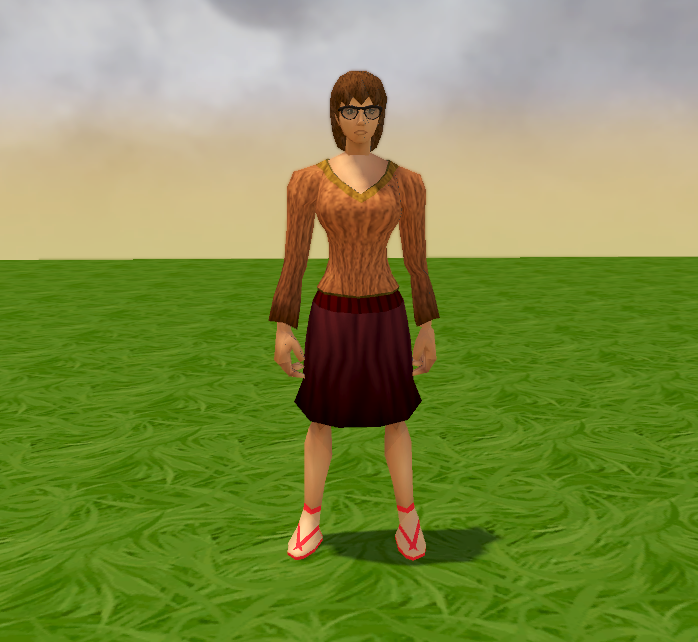 The holiday season isn't always easy - and this year, we know that for some of us it will be tougher than ever. If you need some help, or just someone to chat to, why not reach out to the SupportScape community?

Founded in 2019, SupportScape is a Discord server dedicated to mental health support for 'Scapers everywhere. They offer support, advice, and a friendly face to those who need it. There's even a channel specifically for venting.

Whether you've got general worries or are struggling with more complex problems, SupportScape can be there for you. Their volunteers are available 24/7 - and they're here to help.

You can join the community via this link.

We love when a community pulls together for an event, and we're thrilled to see Clan Quest's Advent Calendar. Each day there's new fun titbits and activities to be unlocked - and what's more, it's for a good cause! They're raising money for Direct Relief, an international charity that helps people in all kinds of situations.

Find out more here, on the Clan Quest wiki.

You know what, since it's the holidays, we'll show off two Pink Skirts events this week!

First up, we've got free-to-play Fist of Guthix... Christmas Edition! Join Doctor Brian on World 81 this Sunday December 20th from 18:00 - 19:00 Game Time to join in the festivities.

Alternatively, Doctor Brian's also leading the charge in Happy New Year Barrows, for the first Bossing Sunday of the new year. Join the fun in World 10 at the Barrows Graveyard on Sunday, January 3rd from 18:00 - 19:00 Game Time.

As always, you can see the full Pink Skirts calendar right here on their website - and don't forget, their 12 Days of Christmas event is still ongoing!