There’s a surprise update coming next week in the form of the Daily Challenge Rework. We’ve got Mod Shogun here to fill you in on all the details…

Mod Shogun here, and I wanted to let you know about some cool changes to the Daily Challenge System that I've been working on.

As I see it, there are three main problems with the current Daily Challenge system.

In the Daily Challenge Rework, we strived to fix these issues by changing the most monotonous tasks, allowing players to keep the items they created as part of a Challenge and removing the need to visit a Challenge Master.

We began by taking a look at Daily Challenges that just feel like chores. For example, one Agility Challenge requires you to do 32 laps of the Barbarian Outpost Agility Course. This means not only that you have to do a large number of laps, but also that you can’t even choose where to do them. Furthermore, if your Agility level is way beyond the selected course then this Challenge isn’t even earning you XP.

So, to solve this issue we’ve simply increased player agency. Instead of having several Challenges per skill, most of the time there will now be only one. This single Challenge will require you to interact with the skill in a manner of your choosing. You might be asked to run five laps of an Agility Course, but you’re free to pick which one. Or maybe you’ll need to cut 28 logs – if so, you’ll be able to choose from whichever trees you like.

The amount of activity required to complete a Challenge has also been reduced, not because of difficulty, but because completing a Challenge often felt more like busywork. No longer will you have to spend your time lighting every beacon simultaneously, stringing 336 elder shieldbows, or baking ludicrous amounts of summer pies.

Which brings us on to our next topic. Previously, you’d trade away your crafted items when completing a Challenge and receive something of equal value in return. The problem was that sometimes you’d receive items that were just as valuable, but not nearly as useful, as the ones you gave away. Now, you will keep all items crafted during a Challenge. Hope you’re hungry for summer pies!

Here’s a look at the new Daily Challenge interface: 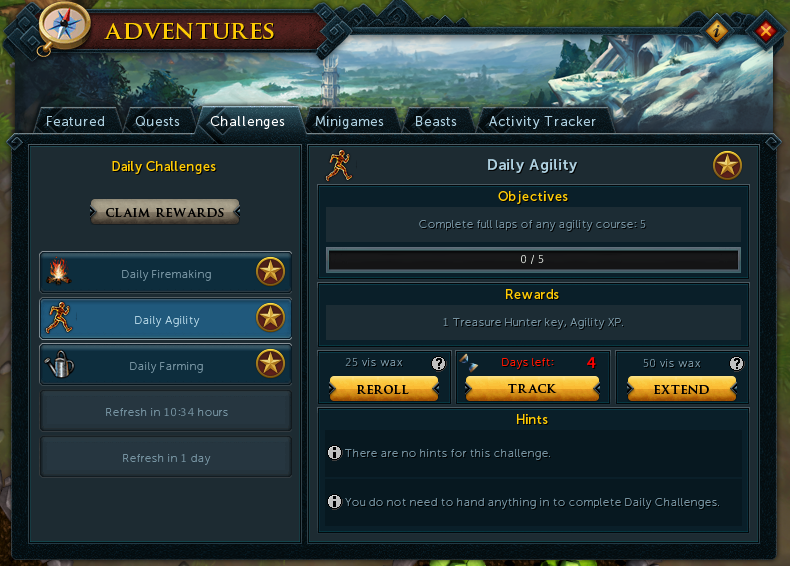 You can see that the recommended tasks have been removed and replaced by a new ‘Claim Rewards’ button that will allow you to complete your Challenges and receive your rewards from anywhere in the game world.

With all these changes to Challenge completion, we felt it was time to revisit the XP reward for Daily Challenges. We looked at several options, but in the end, we decided that each Daily Challenge should award the XP equivalent of a huge prismatic lamp.

We’ve really enjoyed working on the Daily Challenge Rework, and we hope that you’ll all have fun completing the new Challenges we’ve devised. Now, if you’ll excuse me, I have some Dailies to do!