Yak Track is back, and this time we’re feeling the frost! Complete tasks across Gielinor for Fremennik and Mahjarrat-themed rewards and other cool bonuses. You can jump in anytime from December 5th until January 29th next year.

Say hello to our new token item, the Yak Coin! These coins can be redeemed for all sorts of items, including XP boosts, previous Yak Track cosmetics, and alternate versions of some of the new cosmetics.

A Yak Coin is obtained every 5 tasks during the core Track, and then with every completion of the repeatable Track. Cha-ching!

Don’t be hoarding them for too long though, as you’ll have one week after the Track finishes (i.e until February 5th) to spend any remaining Yak Coins and mop up any unclaimed rewards with the Yak Track host.

With that in mind, let's get into how to spend them.

Next Monday marks the official launch of a brand new shop that sells EVERY cosmetic override, animation, and pet from the second Yak Track to the 10th!

We've got 51 tasks for you to complete this time, testing all sorts of different skills. There are rewards for each task, but don't worry if you don’t fancy completing one – you can always use a Task Skip.

You'll need to purchase Task Skip tokens from the event interface using Bonds. It costs 1 Bond for 4 tokens, or 2 Bonds for 10. If you have any Task Skips left over at the end of the event, you can always save them for the next Yak Track!

As well as Task Skips, you can also take the 'Skill and Kill' option, which means you can complete a task just by playing the way you would normally – i.e. earning XP or killing enemies. This way, you're making progress on the Track and earning your rewards just by getting on with your usual activities! However, progress will be slower and more steady than when completing the standard tasks.

Tick off the tasks and you'll be rewarded with cosmetics, pets and those useful items you’d normally obtain from Treasure Hunter (Lamps and Stars, Protean Packs, Oddments for Ironman players, etc).

As usual there are two prize tracks – the free track (available to free-to-play adventurers as well as Members) and Premium (only available to Premier Membership or Premier Pass holders). The latter gives you prizes from both tracks.

You can unlock the Premium track by having an active Premier Membership, or buying a Premier Pass for 2 Bonds in the interface. And remember, if you start completing tasks and then gain a Premier Pass later, all of the extra rewards from the core tasks you would have earned will automatically unlock for you!

Ironman accounts can get cosmetic rewards and Oddments – but nothing that boosts XP, of course.

To claim your rewards, you must have enough space in your Backpack! 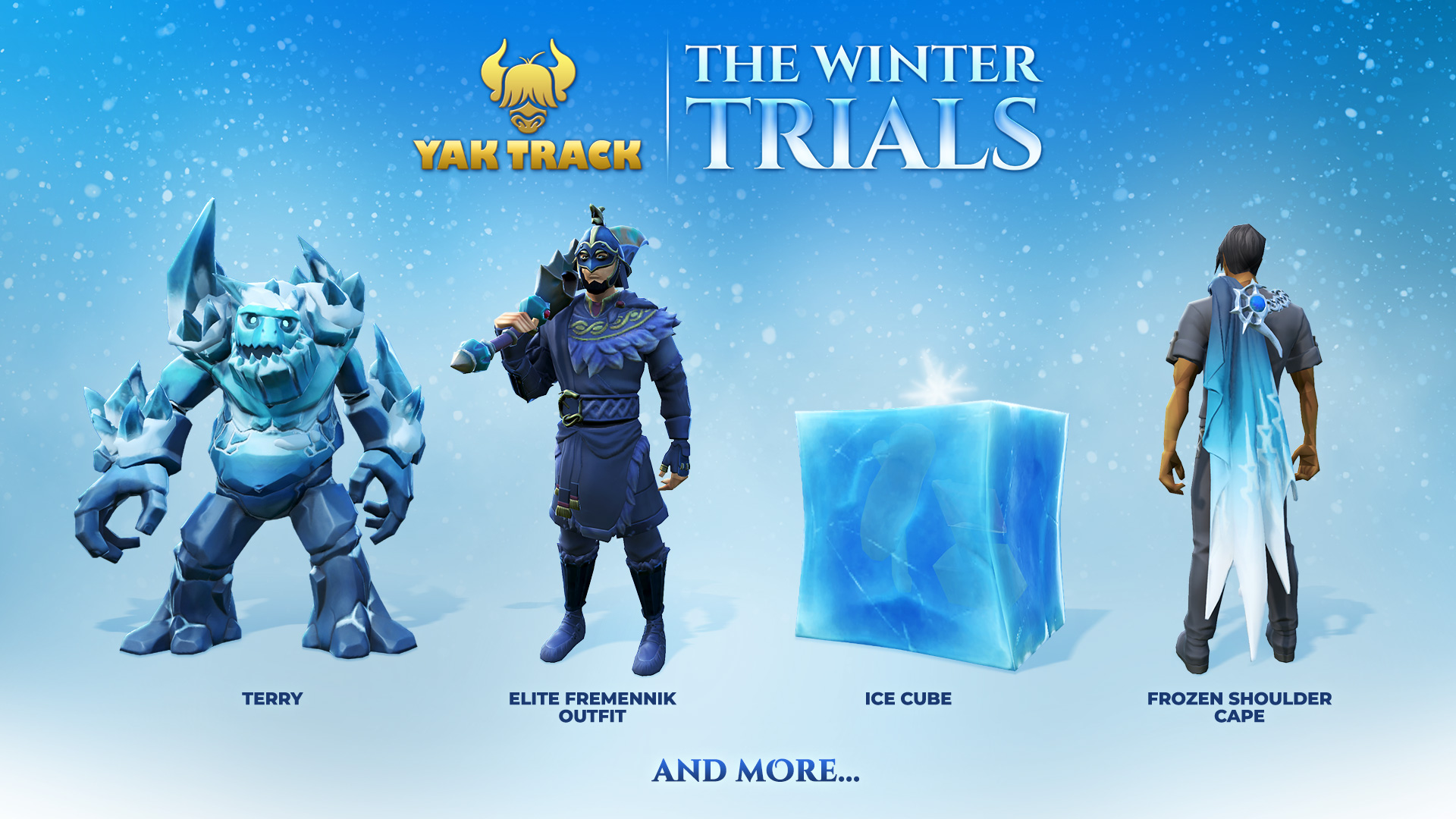 Alright, ready to hit the Track? Yak Track: The Winter Trials runs from December 5th to January 29th. You have until the end of February 5th to claim your rewards and spend your Yak Coins.