I have some significant news to share today on our progress to restore and return accounts impacted by the Login Lockout. This is a lengthy update that includes the first details on the return of accounts, our planned aftercare process, our plans to make things right and more beyond.

The Beta has been our opportunity to put over two weeks of hugely complex work using telemetry to fill data gaps into the hands of players. This was all about getting players into their own accounts, and them letting us know what they thought, and felt, about the state of their accounts.

What's come out of the Beta is clear - the majority of the players feel their account is in a close to or as expected state (some messy banks aside!). This has been really great to see, and pays testament to the hard work of the team over the past few weeks to get this done with the highest degree of accuracy possible.

This wasn't everybody's experience, though. There are some known issues remaining and there are bugs for us to fix. It's also clear some accounts are more adversely impacted than others. We've already made improvements today in the Beta that have had great initial feedback, but there's still more work to be done for some.

Throughout this process, I've promised you that we'll balance returning accounts with the best possible accuracy with the time it takes to get you back into the game. From the Beta, the message is simple - the majority of participants feel their accounts are ready to go.

Based on the Beta results, we are excited to share that we will begin the process of returning accounts early next week. While this is obviously the news everyone has been waiting on, we do want to stress this is the start of a journey rather than the finish line. With our learnings from the Beta, this will be a rolling process, from the way we deploy accounts to the aftercare on hand providing further support as needed.

First, we'll get the accounts that we are confident are in a strong restoration state back into the game. This will happen early next week. We'll also work in parallel to continue improvement efforts for the more adversely impacted accounts to get them back in your hands as soon as possible, too.

As you read this, we know many of you will immediately be wondering if you'll be playing again next week. We'll be emailing anyone who can return to game in this initial rollout as soon as we can - again, early next week.

As I mentioned earlier, despite the return of accounts into game, some known issues remain. While we've been able to overcome so many challenges in this process - that's taken everything from building brand new tools to mind-boggling complex workarounds - not every problem has proved to be surmountable.

While most of these are minor, in the interest of being open and transparent there are a few more significant issues we want to tell you about now.

We will post a more complete list next week alongside the first rollouts as we gather up all the information, but we expect these to be minor impact compared to the points above (pending any new information coming to light that we don't know today!).

With all that said, as I've talked about before, returning your accounts is just part of an ongoing journey. Certain things may not be perfect and outliers are completely possible. But, as I promised, we will do our absolute best to put things right - and that's where our Aftercare process comes in.

From next Tuesday's initial rollout, every person impacted by the Login Lockout will have the opportunity to flag anything that doesn't seem right when you return into game. This will be done through an easy-to-submit form to Player Support. Plus, within sensible reason, you'll be able to use this form a few times in case you discover something else is off later on.

To set expectations, we won't necessarily be able to return everything as it was through our Aftercare (for example, the insurmountable problems we mentioned earlier). However, even in those cases, we want to hear from you. We've promised to do right by you and we'll do what we can to make up for anything lost.

Our team will be working incredibly hard to get through any tickets to the best of our ability. With something this complex, we can't fully predict how many tickets we'll be dealing with and at what pace. Please do bear with us, but know that we will get back to every ticket and every person no matter how much time it takes.

Let's face it - this has proved to be a challenging time for RuneScape. This unprecedented event is something all of us will never forget. As a RuneScape Team, we have grown together and learned so much. Along the way, you've been so supportive, despite what we can only imagine has been an agonising wait to be reunited with your account. As players begin to return to the game, we also want to make April a fantastic month to remember, and this is how we'll do it. 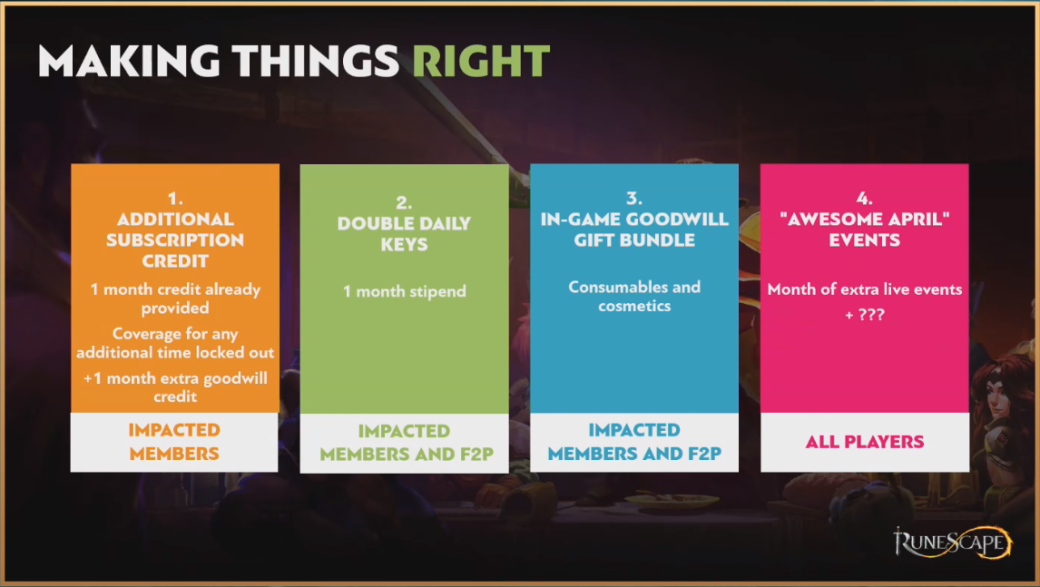 As we mentioned last week, if you were impacted we’ve already covered your Membership time by a month. On top of that, please enjoy another month on us as a thank you for bearing with us during this downtime - even if your Membership ran out after March 4th.

Impacted Premier Club Members will also be offered an exclusive discount (on top of these extra months of standard Membership) ensuring that if you choose to renew you get all the benefits next year at a price that takes time away into account.

Throughout this whole process, the RuneScape Team has been blown away with the incredible patience and support that's been on show. We wanted to recognise how much that's meant to us, so we crafted a special care package as a token of our gratitude to everyone impacted. 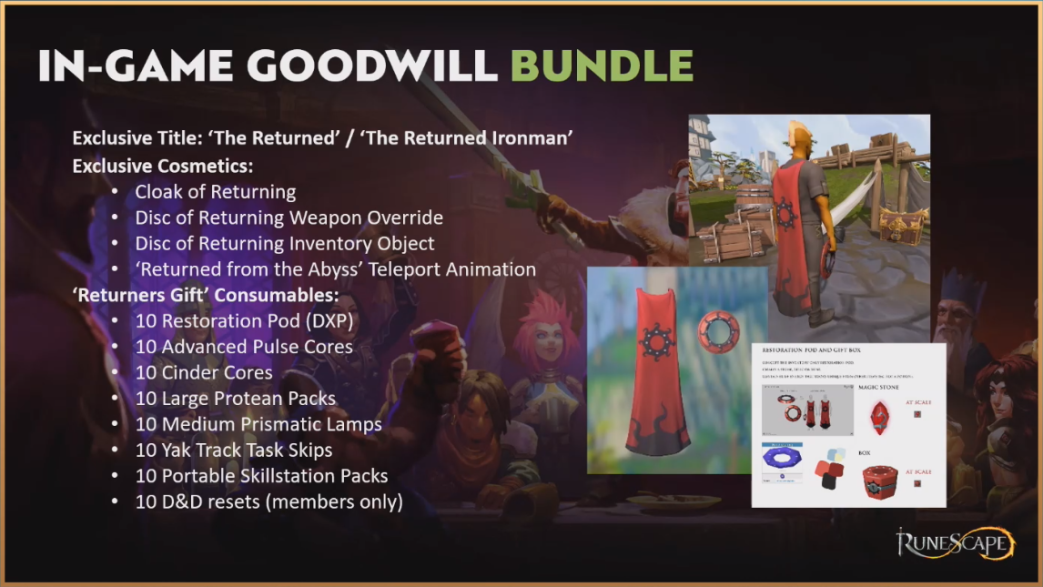 As development continues on these items, these rewards will be available for returning impacted players from April 6th.

To boost those daily gains and return missed opportunities of logging in every day, every impacted player will also receive a free month of Double Daily Keys on us, too.

We want to be ready to welcome players back to the game they love, re-unite the community, and recognise the loyalty of all RuneScape players - especially after you made it clear you want to stand shoulder-to-shoulder with those who were impacted. 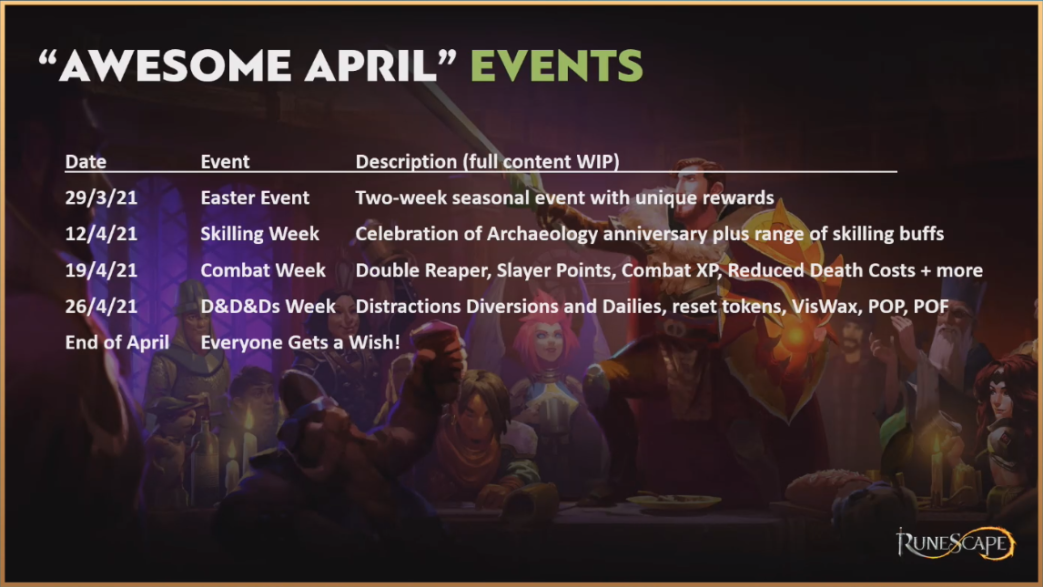 Beginning April 12th, we'll be adding weekly themed events to the game on top of our existing content plans, from an upgraded Combat Week including Double Reaper and Slayer points, to a D&D&D week including double vis-wax opportunities, and much more. We'll detail these in full soon. We're also extending Yak Track by two weeks, and Vic The Trader will make a repeat appearance later this April.

And, on top of all of this, we have a packed line up of content to come this April. We'll give you a look at what's to come next Tuesday in our usual Weekly Livestream.

Oh... And One More Thing

Last, but certainly not least, is something a little extra special we're cooking up to thank all players, too. At the end of April, we're going to be granting some special wishes for everyone.

While we're being all mysterious and illusive on this one, we'll reveal more about this later in the month. What would you wish for?

As I wrap up this message, I just want to re-iterate that this journey isn't over. We've made huge strides, albeit imperfect, but we'll continue our mission to get you into a happy place.

I'm super stoked about April and we've got the rest of this amazing year still to look forward to.