Hi everyone, I'm Mod Shadow and I'm the Platform Architect for our Publishing Platform! Ever felt curious about the more technical aspects behind the Jagex Launcher? Well, today I can reveal the secrets about how it evolved over time into what you see currently!

Be warned, this article concentrates on highly technical details– we’re going in deep, folks! I'll also be linking to various other sources as we go, so you can read on even further if you're interested.

...and there were whispers in the studio of ideas for a launcher – a way of unifying our games under one banner. We even created a prototype, demonstrating how a player might install and launch both Old School and RuneScape from a central application on their humble Windows desktop.

Fast forward to mid-2017, and we had gathered a small team to begin building it. We had lofty ideas of players being able to maintain a longer-lived session of days and weeks, rather than the mere hours we had at the time, so people could quickly get into the games they love without needing to re-enter their username and password. Sound familiar?

That same year, Jagex announced that we would be bringing both Old School and RuneScape to mobile – we, therefore, parked the launcher to concentrate on this for the time being. However, this new focus actually gave us new ideas for the launcher, because we were also looking at how to bring long-lived sessions to mobile devices. To this day, it’s possible to boot up both the iOS and Android app and just tap ’Play’ if you've logged in just once before. You can think of this mechanism as the first example of what we now provide in the launcher today, as it's fundamentally built (with a little Jagex magic) on the same core concepts.

Dipping our toes in

You may have heard of OAuth2; it's been around a little while. Even if you haven’t, you're likely using OAuth2 every day without realising it! Every time you log into something using your Google, Facebook, Twitter or even Twitch account, you're using it. It's not something Jagex invented and has been worked on for many years by security professionals to provide a watertight method of authorising you to use software. It’s trusted and used by thousands of software companies to keep their accounts as safe as possible.

However, RuneScape has also been around for a good long while, and it already had a very well-established way of logging users in, with certain user experience expectations built in too. So, we had to ease our way into utilising a new mechanism carefully. OAuth2 comes with two types of tokens; an Access Token, which is used to authorise network calls, and a Refresh Token, which is used to get a new Access Token when the existing one expires. It's these tokens that give us the ability to log you back into the game, even if you haven't played for days on mobile. In order to maintain our existing user experience at the time, we utilised OAuth2's extension specification and hooked in our existing login processes to generate these tokens. This was our first step towards a new way of logging in. We introduced this feature as part of the mobile beta and subsequent launch of Old School on mobile in 2018.

However, this presented both a technical and user experience challenge. OAuth2 expects to be handled by a web browser, something that can render HTML, CSS, JavaScript, store cookies and deal with HTTP responses, these aren't things that are performed directly by a game client.

Given that the mobile client was already capable of dealing with OAuth2 tokens we decided, once again, to tackle it there first. We focused on mobile first because we had already made progress utilising OAuth2 tokens with success on that platform, so it made sense to enhance the flow there before trying to recreate it anywhere else. Both Android and iOS have very good support for this kind of flow, specifically providing features to enable OAuth2 via specialised browser windows (Trusted Web Activity and ASWebAuthenticationSession respectively) that could be launched from phone apps.

We already had a login experience that people knew from the browser which we like to call the ’web login flow’. People had used this process for years to log in and manage their accounts, post on the forums, or subscribe. It therefore made sense for us to re-use that where we could. We spent a fair amount of time with the game teams from both RuneScape and Old School to ensure that we used all the right security controls on the specialised browser windows mentioned above. We wanted to get to a place where we had a working mechanism

In December 2020, for the first time ever, people who logged in on mobile went through this new flow – supported by the same protections we had in front of our website logins! Things like captcha, WAF, rate limiting and other standardised protections only achievable through a browser and HTTP network calls were now protecting logins to the mobile game.

And now for our next trick!

We were in a good place with Old School on mobile: we had the ability to tweak and add further protections to login, we had those all-important remembered logins and all the other benefits I mentioned earlier, and when it came to releasing RuneScape on mobile in 2021 it was very straight forward to integrate it with the OAuth2 flow. But how would we get these same benefits on desktop?

Unlike Android and iOS, Windows does not have a specialised browser window that can be used in the same seamless fashion. Instead, a user can have multiple browsers which do not have first party support from the operating system. So, we experimented with using the user's default browser, in a similar way to how we handle Apple and Google logins on desktop.

The principle was simple:

In practice though, the experience left something to be desired. What you actually end up with is:

We looked at trying to remove some of the steps. Instead of the game client starting first, why not the browser? And instead of utilising the same mechanisms Apple and Google logins use, we looked at starting the client with protocol handlers. Let’s see how that plays out:

This was closer to what we wanted. We're using the OAuth2 authorization_code flow as intended now. However, we've also now got a horrible system dialog that we can't style or change in any way! Plus, if the user selects no, then nothing ever happens, and they're forced to start again.

Also, what happens if the game is already open? Should we start a new instance or pass the authorisation to the existing instance? RuneScape already has a way of opening the game from the browser, of course. But the whole ethos of RuneScape's client is built around running as many instances as you want, rather than keeping a handler open to just one, making this a tricky technical challenge.

There are a couple of strategies which would allow us to avoid the dialog altogether:

What a bundle of fun!

If we bundled a browser in with the game, this would give us a UX which we could completely customise – no dialogue, no need for the user to manually swap between applications. On the face of it, this seemed like everything we wanted, but there are a few caveats. One is RuneScape-specific, and the others are presented with an eye to future Jagex publishing opportunities.

It became clear that while it may give a better user experience than the default browser approach we considered previously, bundling a browser directly into a game wasn't feasible long term. We needed to revisit an old idea... 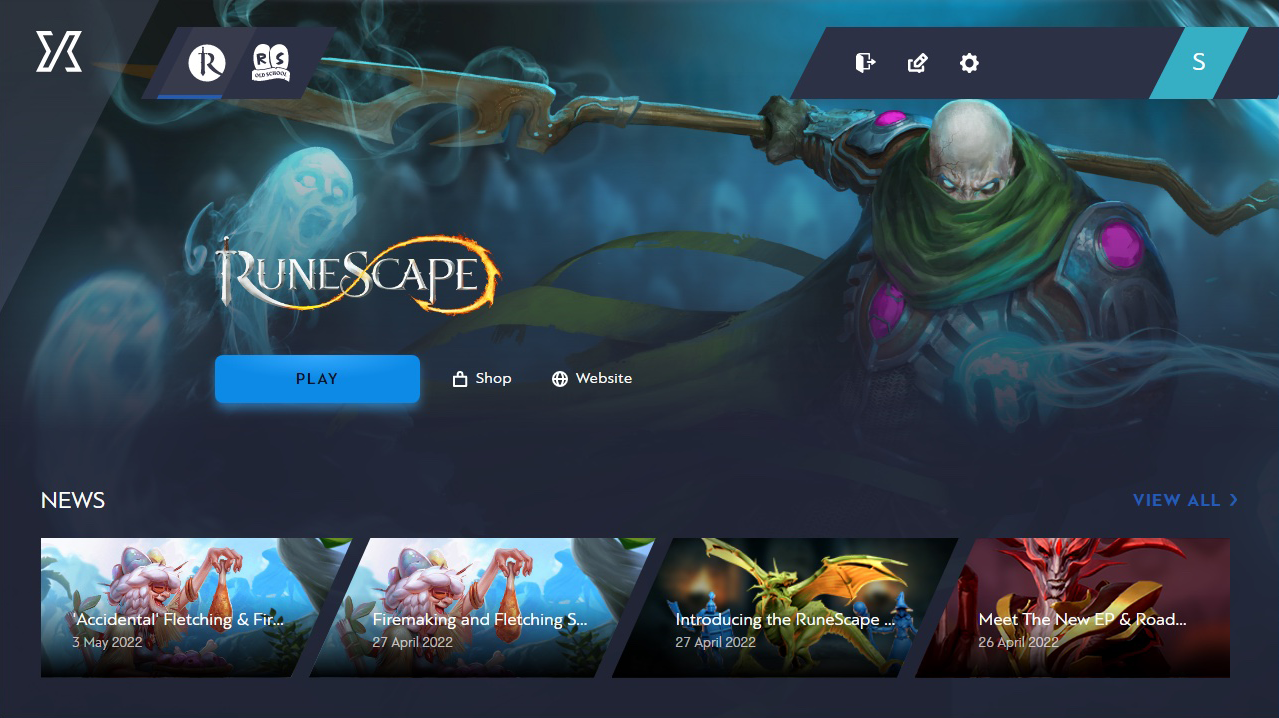 Towards the end of 2020 we were ready to discuss the prospect of a launcher, only this time with much more experience and focus. We took the same concepts we discussed about an embedded browser above and applied them instead to a launcher, and found that it fit our use cases and user experience goals perfectly. This launcher would be developed using an embedded browser from the start, one that would be used for more than just authentication and authorisation – and would set the overall user interface as a baseline.

So let’s run through the requirements we mentioned above, and show how the launcher enables us to meet them:

At this point, hopefully it becomes clear that the launcher delivers exactly what we wanted to achieve, both from a user experience and a security perspective. There are of course numerous other benefits that it also brings in terms of insight and user experience optimisations, but perhaps those are for another blog…

I hope this gives you an insight into some of our developmental process when it came to creating a launcher, and the challenges we needed to overcome in delivering it to you. We made sure that your account's security was our top priority every step along the way, as well as making sure that every interaction you have with our games is as seamless as it can be without compromising that security.

Going forward, we'd like to talk more about the additional features and benefits the launcher brings our players, and how we're continuing to support this vision of security and user experience into the future. Keep an eye out for more insights soon – and thanks for reading!