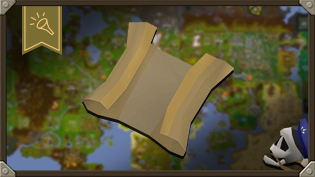 Hello friends! Postie Pete here. Do you all remember that funny letter I received in last month’s Postbag? Well, something even more unusual’s gone on today!


Earlier today, an odd-looking chap in a hood came by the G.P.D.T. offices and handed me four notes. They didn’t have a stamp or anything! I didn’t get a good look at his face, but I swear I saw a glimpse of a skull under that hood! Now I’d know better than most that there’s nothing wrong with having a skull for a face – or an entire body, in fact – but you have to admit, it’s a bit out of the ordinary!


Anyway, these notes. According to our hooded friend, all four of them are clues – and if you follow them, they’ll lead you to never-ending wealth! Sounds like a good deal to me, assuming he’s telling the truth…


Thing is, I can’t actually give you these clues for another week. In the meantime though, he did say I could share the following information: