Introducing The Garden of Kharid

From November 7th, visitors to the Kharidian Desert will be greeted with an unusual sight: a small encampment of druids, who appear to be investigating… a garden?

It seems that since the defeat of the Elder Gods, Gielinor has been healing. The Garden of Kharid has sprouted overnight, and druids Polletix and Sydekix need your help to find out why. You’ll travel Gielinor, cultivating plants wherever you go, and investigating other reports of suspiciously lush plant life. You’ll be handsomely rewarded for your efforts, so come on – get digging! 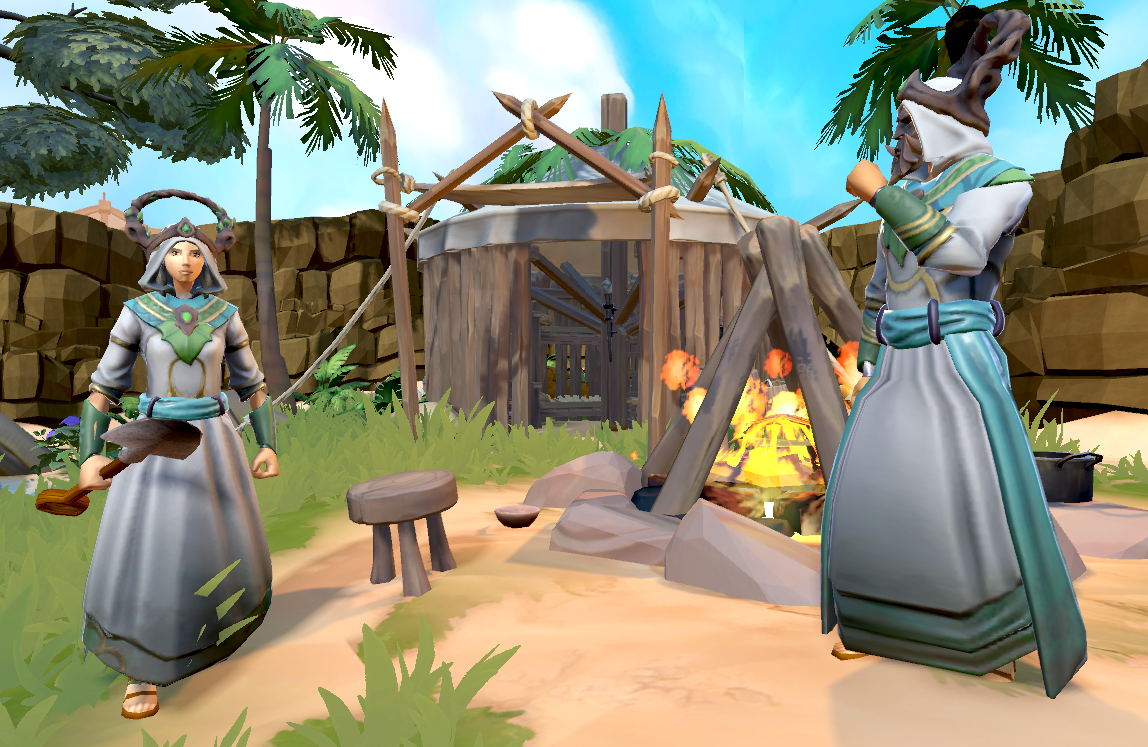 There’s plenty of work to be done in the Garden, and you’ll need to utilise three key skills to benefit from everything it has to offer.

Polletix and Sydekix want intrepid adventurers to travel the world, planting herbs and checking their progress. They’ll reward your hard work with a new sort of currency that can be used to buy stuff in Polletix’s Reward Shop, but hold on – couldn’t you do this sort of thing faster?

Introducing Plant Power, a Farming upgrade that will allow you to plant multiple seeds in the same patch – with diminishing returns of course. This is revolutionary news for any Herblore afficionados out there, because you’ll be able to get your hands on more herbs than ever before! It’s good news for the rest of you, too – you’ll cut through the seeds clogging up your Bank space in no time.

These druids hold untold knowledge, but unfortunately, they’re not particularly streetwise. That makes them the perfect target for any enterprising thieves looking to score some cool new items!

Around the Garden of Kharid you’ll find two new Thieving targets, the Crux Eqal Druid and the Crux Eqal Warrior. To pick their pockets you’ll need Thieving levels 42 and 83, respectively, but it’s well worth putting the effort in. Apart from the competitive XP rates on offer, this is the only way to obtain Catalytic and Elemental Anima Stones. What on Gielinor are those? Glad you asked…

The Crux Eqal have harnessed the power of anima, and now so can you! Elemental and Catalytic Anima Stones are new consumable items which, when carried, will increase the number of Runes you can obtain from each Rune Essence by 2.

Right now, pickpocketing Crux Eqal members in the Garden of Kharid is the only way to obtain these useful items – but don’t worry, we plan to add them to other loot tables in future.

The druids will grant you special currency for planting herbs across Gielinor. When harvesting a herb patch, you’ll receive currency in line with the number of seeds planted and the required level to plant them – the higher the level, and the more seeds you plant, the more currency you’ll get!

Speak to Polletix, and she’ll let you know the ‘herb of the day’, which will net you even more currency when successfully harvested.

You can spend your currency on a variety of goodies at Polletix’s Reward Shop:

Plant Power lets you plant multiple seeds in one Farming patch, with diminishing returns. You’ll receive more produce for your time, but less produce per seed. Here’s an example:

Good news, everyone! Diseased Farming patches will no longer die!

Previously, you needed a pretty well-thought-out strategy to do a proper Farming run, and this wasn’t necessarily clear to new players. Would-be farmers had to either accept that a sizeable portion of their crops would die, pay to protect their patches, or manually monitor them every few minutes. This system punished players for logging out and put Plant Cures into this weird space where they were very rarely used. So, we fixed it by removing death from Farming completely.

Previously, Compost Bins were a bit of a pain – you had to manage every bin individually to store a pretty miniscule amount of Compost. On top of that, there was always the chance you could ruin higher-tier Composts, wasting your time.

We’ve made the following changes to fix this:

The nightshade patch currently grants only one piece of produce per run, making it a bit pointless. As we’re sure you’ve noticed, it also sometimes uses the term ‘belladonna’, which is inconsistent.