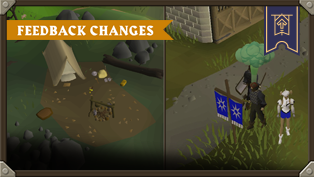 Yesterday's game update included two weeks' worth of content in one: Combat Achievements, The Garden of Death, Poll 77 changes and more. We decided to make some adjustments to our release schedule last week to ensure we dealt with the server outages promptly. Unfortunately, following the update, we were made aware of a number of bugs that had affected players.


Today we'd like to give you a quick update on the most prevalent issues and let you know what we're doing to fix them.


Following a bug with Combat Achievements, we understand that several players lost charges from any equipment which utilises the 'charge' system. The most egregious cases of this happening were with high-level equipment such as Infernal Equipment or the Scythe of Vitur etc.


We're taking this issue very seriously as we understand the frustration caused by losing supplies through no fault of your own. We'd like to let you know that the team is currently investigating ways to identify the accounts affected by this incident so that we can compensate players for the items lost.


For full transparency, we only have a limited number of ways we track this data, so we are currently not sure whether we can reimburse players at this time. We'll keep you updated on the status of our investigation and we're sorry for the frustration caused by this bug.


In terms of the other bugs with Combat Achievements, we've released hotfixes today that cover a variety of those issues (the full list of which can be found in the Issues Table in yesterday's The Garden of Death & More newspost). Unfortunately, there are a few things we were unable to hotfix, which will be changed with next week's update.


These include the following:


From our discussions and your feedback, there are also a few other Achievement-related changes coming next week:


We also heard your feedback on seeing extra information to clarify precisely what is required for the completion of the new Achievements. We agree with you. Next week, we'll be adding clearer messages to any Achievements which require a certain level or raid difficulty. You'll also see more information regarding group tasks, including which team members are required to be inside the main part of the room within 10 seconds of the first player engaging the encounter for Combat Achievement completion.


You also raised concerns about the Blast Furnace change from Poll 77. The intention of this change was to always have it buy/sell at a fixed price, regardless of stock level, as the poll question stated.


Unfortunately, we implemented the change differently from how it was polled. This was a mistake, and it will be corrected as soon as we're able. You should be able to buy and sell at a fixed price from the shop regardless of stock soon. We're sorry for the confusion and will be doing more to ensure these things don't happen going forward.


Onto the big PD (Poison Dynamite) - we've noticed feedback from players regarding its power. It's there for a niche purpose and we want using it to feel good, without making it too overpowered. We've tested this item during several rounds of betas, but we've heard feedback from players in the live game that it can feel clunky to use. We'll be looking into this more closely and we're open to making balance changes if required. Stay tuned and please continue to let us know what you think.


Finally, we'd like to mention our thoughts on a hot community topic that's been trending lately. A lot of players are expressing a desire for us to consider removing Coin Pouches. We firmly believe that Coin Pouches are still essential Anti-Cheating tools, but we're actively investigating ways to make them less annoying for legitimate players. Currently, we're looking to try something with the Diary system - so keep an eye out for more info in the next QoL Poll!


We hope this provides some insight into how we're handling your feedback. Let us know your thoughts and please continue to enjoy the update!