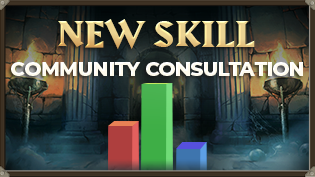 For the first time in 15 years, a new skill is winging its way to Old School RuneScape! We asked players to vote on whether a new skill should be added to the game, and boy, did you turn out.


As we described in the blog, the next stage of the process is the Community Consultation phase. Over the next few weeks we’ll be working to understand what kind of skill you most value and desire – and from there, we’ll come up with some concepts based on your feedback.


Before we move on, we thought you might like to see the voter breakdown. 80% of you agreed that we should add a new skill, which easily passed the poll.


Here are some other stats you might find interesting:


Mmm, delicious statistics. But that’s enough numbers for now. Let’s move on to the Community Consultation! 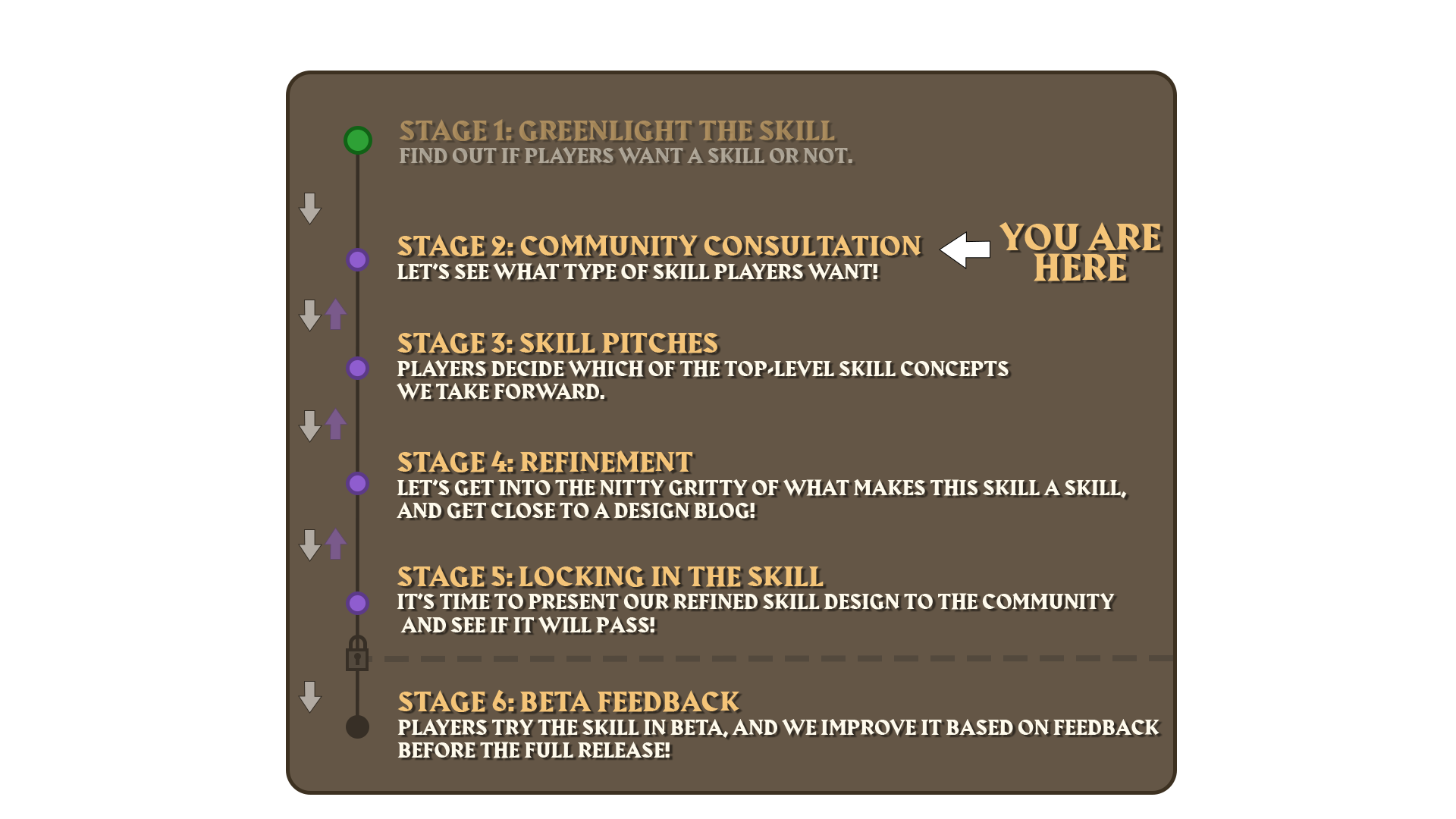 An image showing we're at Stage Two in the new skill polling process.


We've always worked closely with the community, but now it's more important than ever to have YOUR say.


What do you want most out of a new skill? Do you want more loot, better gear or the ability to unlock new areas? Should it be a Production, Gathering, Combat or Utility skill? Should it be something we've never tried before?


There's a number of ways you can send us your feedback, but the most useful ones right now are the Community Consultation Survey and the in-game Poll (live now!)


Please make sure to fill out both if you can – they’re really useful for our team.

A final note that for the purposes of the community consultation survey and poll, we have categorised existing skills into four broad sub-categories.


There will always be considerable degree of flexibility as skill types can overlap between each other. For example, the Construction skill might be considered a production skill, but in practice, we see it is often trained for a utility benefit.


When voting, try to think in broad terms and keep the following definitions in mind:

Combat Skill - A skill that directly integrates with the existing combat system and can improve your power in combat. (Ranged, Attack, Strength, Defence, Magic, Hitpoints, Prayer)


Production Skill - A skill used to take raw resources and use them to make something useful. In Old School RuneScape, these tend to resemble real-life trades. (Runecrafting, Crafting, Fletching, Smithing, Herblore)


Utility Skill - A skill that enhances gameplay mechanics in a unique way. These tend to expand a player's tool-kit in a way that is difficult to describe. (Thieving, Slayer, Agility, Construction, Firemaking)


You may remember the timeline from our New Skill Polling Process blog, but here’s a reminder.

Over the next few weeks, we'll analyse the data coming through via Community Consultation (stage two) to get started on creating some top-level skill pitches (stage three).


We may decide to run additional Community Consultation Surveys if needed. From there, the information collected via Survey(s) and In-game Poll(s) will be used to create our skill pitches.


As you know, nothing is ‘locked in’ until we reach stage five. We can always move backwards, and as such you should think of the Community Consultation as advisory, rather than binding. We’re confident that this is the best approach, because it will allow us to present top-level designs that we can iterate further if you want us to, rather than spending loads of development time on ideas you don’t like. Once we have a pitch the community wants to take forward, we can work on the details.


We expect to share our skill pitches with you in February, but if we do need to extend Community Consultation, it could take a little longer.


So, if you’re excited to learn more about the new skill – hurry up and fill in the survey!


As a studio, we really enjoy communicating directly with players to understand your views, and we’re privileged to have such an engaged community with so many exciting ideas.


It only makes sense that, in line with our goals for the Community Consultation, we’d create a platform that would allow us to communicate directly with particular, highly-engaged players about their thoughts on the new skill. This platform is hosted on Discord, and we’re calling it the ‘New Skill Player Council’.


Selected applicants from the Community Consultation Survey will be invited to join the New Skill Player Council on Discord. We'll ask you questions about different topics relating to the New Skill.


For transparency, everyone will be able to join the New Skill Discord Server and view the different channels – although only invitees will be able to participate in discussion. You can join today via this link. If you don't have Discord or don't want to join, we'll still make sure you're kept up to date with important news via the Gielinor Gazette as well as other social platforms.


Upon joining the Discord, you'll receive a ‘Member’ role automatically, but you won't be able to speak or type. You will be able to see various channels and react to messages which have been posted by others.


A lot of the conversation will be directed by us – we’ll approach the group with a question, and hopefully, the group members will answer! Since we don’t have the ability to monitor the Discord 24/7, the channels will be opened and locked as necessary.


Lastly, select players will be invited to form even smaller focus groups of 6-10 people. This is so that developers can reach out under NDA for trusted players’ opinions on quick questions and specific feedback points. As these groups will be under NDA, these conversations will happen in a private area of the Discord server. We’ll share a general overview of the discussions we’ve had on a regular basis to keep things as transparent as possible.


Applicants will be selected based on the answers given in the Community Consultation Survey linked above. We're looking to invite a wide range of players with all kinds of interests, including some who voted 'no' in the original greenlight poll.


Unfortunately, we won't be able to invite everyone who applies, because conversations need to be manageable for the team working on the new skill. If you don't get chosen to be part of the Council, please don't worry. Feedback will still be collected from other platforms such as Reddit, Twitter or Facebook and we may re-open the applications at a later date.


Please note, we'll be engaging through Discord sometime between our standard working hours of 09:00 - 18:00 GMT on weekdays. We'll start inviting successful applicants around the end of January.

Tips for your Feedback


We’ve already seen loads of valuable feedback about the new skill – but some of you may be wondering how you can voice your opinions in a constructive, helpful way.


Here are our top tips for making your feedback stand out:


1) Start with why you want something before going into specifics.


As developers, we really want to know what motivates your wants and must-haves. In some cases, it's more important than the thing you're saying you want.


Explaining your core motivation helps us understand why an idea would be good for the game. It can also inspire developers to create new and innovative solutions to achieve the core of what you’re asking for.


For example, Player X really likes the concept of Sailing, but their motivation is to find new bosses in different places. This can be achieved in all kinds of ways, and doesn’t specifically need to be a Sailing skill.


Telling us your core motivation allows us to design a solution which achieves the same player experience in multiple ways. We may even come up with a solution that players have never even considered!


2) Don't be afraid to explain a personal or selfish reason why you feel a certain way.


We need players to be brutally honest about what they want. Speaking on behalf of other types of players or communities gives us an inaccurate picture of your desires and motivations – so it’s okay to be selfish, and speak only for yourself.


We want to know why your feedback matters to you, so that our skill pitches align with your expectations.


For example, if you want a skill that’s AFK’able, we’d rather hear one good point explaining why than a dozen reasons an AFK skill might be valuable to other communities.


With a hot-button topic like a new skill, we’re sure you have loads to say – and in an ideal world, we’d be able to sift through pages and pages of feedback every day. Unfortunately, with several different platforms to monitor and thousands of interactions from players, we don’t have time to read everything.


Concise feedback is more likely to be seen by the team. We’re not looking for one-liners, but please try to give us the condensed version where possible.


We hope these tips give you a bit more insight into the feedback process, and we look forward to hearing your thoughts!


Thank you so much for trusting us to work on a new skill with you in 2023. It's a huge challenge but we have faith that you'll be able to tell us exactly what you want!


We look forward to your Survey responses. There's also a short in-game poll running, so make sure to check it out!


Mods Husky, Kieren & Elena will be joining us live on our Twitch channel on Monday 23rd January at 17:00 to talk more about Community Consultation. We'll see you there!