Answer quiz questions in a special Big Cats edition of The Drop and donate Bonds to adopt four big cat companions and unlock exclusive titles - raising awareness of the plight of these endangered animals, in partnership with WWF.

Head to Burthorpe and talk to the Conservationist to get started. The Big Cats quiz will start twice hourly – on the hour and at half-past. Answer questions correctly to earn points, which can be used to adopt companions and unlock titles.

Update: We will shortly be implementing a fix to allow Ironman characters to donate Bonds and adopt the lion and snow leopard cubs.

Speak to the Conservationist to open the Sanctuary interface, where you can collect your companions and unlock your titles.

For the next four weeks, you can use a beast of burden pouch on any of the cub companions to impart the same benefits to your feline friend.

The Big Cats quiz lasts two weeks – the first week themed around jaguars and the second around tigers. You can earn up to 12 points in the first week, and 24 in the second.

As a bonus, participating over the course of the event will also earn you XP lamps:

The Conservationist will stay around for a further two weeks to allow access to the Sanctuary.

Get involved and give generously over the next two weeks, and tell your friends about this fantastic cause. You can find out more about our other in-game charity events in support of WWF below.

Visit WWF's website, too, and find out more about awe-inspiring work they do to protect the world's endangered species. 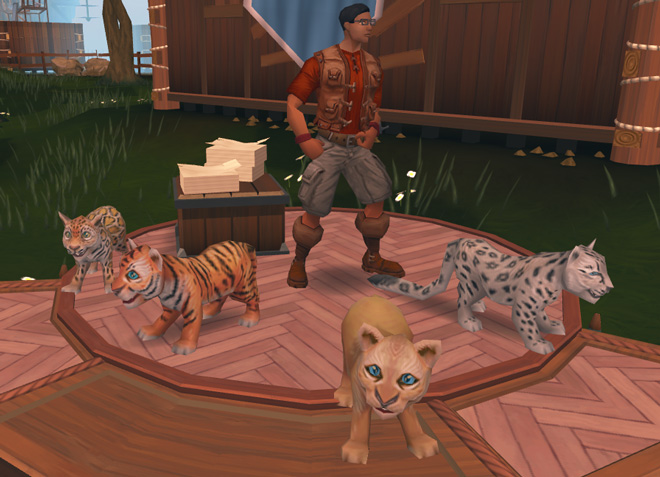 The portal to Mazcab's been open for a week now, and even if you're not ready to raid, there's a whole load to do there.

Be sure to check it out if you haven't already – there are no entry requirements, and the bizarre, alien Nemi Forest is ripe for exploration by anyone. Rescue lost goebies, manipulate ancient artefacts and tackle the exotic plant life to uncover long-buried lore secrets, pets and more.

You can reach Mazcab by speaking to Wizard Chambers at the docks between Lumbridge and Al Kharid – he'll teleport you straight to Tuska's back, where you'll find the portal. Alternatively, head to the Bandit Camp lodestone or head south along the Kharidian Desert coastline, then swim over to the fallen body of Tuska.

Later this year comes the next quest in the deliciously dark Myreque series, so the Ninjas have made their most daring infiltration yet. They've snuck into Morytania and made a coffin-load of tweaks, fixes and quality of (un)life improvements to the Myreque quests and the area in general.

Read the patch notes for full details. If you've yet to play this much-loved quest series – which is a requirement of the new quest - there's never been a better time to do so. Steel your nerves, and get prepared now!

Check our YouTube channel, too, for recap videos of streams you may have missed, including last week's Raids Recap and Runecrafting tease!

Join the usual cast of JMods on the streaming sofas as they take your questions, and showcase a little of what you can expect from Elite NPC spawns, due out later this month!

Join Mods JD and James as they take out some bots and donate the loot to WWF. Charity and hilarity will ensue. Don't miss it!

We'll be hosting a Barrows mass on Friday for WWF. All loot will be converted into Bonds and donated to the charity – get charitable and make sure you take part!

Every day, one step of an adventure will be laid out on the forums, and the decisions the players make will help form that raid. Join us in creating a story of hunting through a dark dungeon for monsters, treasure and fame, one day at a time! Rewards include membership and Runecoins, as well as RuneScape goodies.

Check out the Roleplay a Raid forum thread if you're up for the challenge!

Get your pencils out – there's a new Player Gallery in town! It's time to draw Mazcab – are you up for the challenge?

Check out the awesome winners of Player Gallery 52 - Nature's Takeover - and our Design your Evolution T-shirt competitions – there are some great entries in there!

Have a great week, 'Scapers, and let us know what you think over on the forums.

Read the patch notes for further details of today's updates.