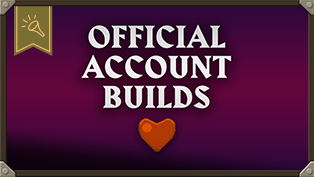 This year's Winter Summit was jam-packed with reveals, from expanding existing skills, continuing the Mahjarrat storyline, to the possibility of a whole new skill. If you've not already caught up, make sure to check out the Summit Summary blog!


One of the announcements that garnered a lot of discussion from you was the idea of 'Official Account Builds'. To put things very simply, Official Account Builds was pitched as a way to allow players to block XP gain in certain skills so when playing on their restricted accounts, much like Iron and Hardcore Iron can now, they'd be able to experience the game through a different lens in an official capacity.


There's more information in the summary blog, so be sure to check that out. Today though, we'd like to address some of the main points we've seen you raise, ahead of the poll going live on December 20th!


One of the officially recognised builds we were offering support for were so-called '10 HP Pures'. As the name suggests, these are accounts that limit themselves to 10 HP, but still seek to level up their other combat stats in unique and interesting ways.

These 'unique and interesting' training methods have been a topic of much discussion, since the existing 10 HP community have spent years painstakingly theorycrafting and perfecting niche methods to level up some seriously impressive trophy accounts.


While our initial proposal aimed to open up more of the game and give a wider appreciation (and hopefully encourage wider participation) towards restricted builds, members of the 10 HP community and wider community alike pointed out that our proposal would effectively reduce the unique progression of these accounts to whacking Sand Crabs and eating a little more often.


In addition to this, we've seen concerns that massively improving the ease of creating such accounts could have knock-on effects in PvP scenarios, especially at lower combat brackets. Where currently the only way to make a 'reliable' 10 HP Pure for PvP is to make an Iron, gated behind thousands of hours of progress, our proposal would knock this number down into the hundreds and could prove damaging to PvP at lower levels - something we're especially cautious of with Bounty Hunter on the horizon.


It's difficult for us to disagree with these reasons, and as such, we've made changes to the system before it goes live for polling next week. We've decided that for now, we won't be offering restrictions for Hitpoints with Official Account Builds. This doesn't mean that we can't revisit Hitpoints restrictions in the future, but if we do then we'd like to ensure its with existing builds and training methods in mind.


Another official build we spoke of was Level 3 Skillers, also known as Skiller Pures. With Official Account Builds, Skillers cannot gain ANY combat experience. As they would still be locked to 10 Hitpoints and unable to progress in any combat related skills, we've decided to keep them in the system.


Note: We've seen a few suggestions that could help keep 10HP Pures in the system, such as disabling actions that would grant XP in a restricted skill, or preventing any damage dealt (i.e. always hitting 0) if you would be gaining experience in a restricted skill. We looked into both of these options and ultimately concluded that being able to execute on either would require such a significant amount of development time we wouldn't feasibly be able to release the content within the first half of 2023. Instead, we opted to remove the option entirely in favour of builds players were excited to see support for, and we'll look to revisit Hitpoint restrictions in the future as as separately polled option.


Feedback on Hitpoints aside, we saw a handful of other questions and topics that we'd like to spend some time clarifying.


First of all, let's talk development time and game modes! We'd like to reiterate that Official Account Builds are not new game modes. They're more 'mode modifiers', or exactly what they say on the tin: builds. If you already have an account that fits within one of the restrictions, you'd be able to opt in to the restriction, regardless of whether you're a Main, Iron, Ultimate iron etc.


On the development side of things, the current pitch is relatively simple and easy to expand on when the core system is in place - similar to Quest Speedrunning, we can simply plug in additional restrictions as we are able to add new quests. This means we wouldn't need much dev time to spin up something like restrictions to non-combat skills in the future.


We also saw a handful of concerns around 1 Defence Pures gaining access to gear or spellbooks that would offer huge spikes in power. In case it wasn't clear before, restricted builds will not be able to complete quests or equip gear that they lack the requirements for. This means a 1 Defence pure couldn't complete Lunar Diplomacy because it has a hard requirement of 40 Defence. Similarly, they wouldn't be able to equip Barrows Gloves as they require 41 Defence to do so.


They could however gain access to Fairy Rings or Darkmeyer, as none of the pre-requisites for these have a hard Defence requirement. There are other items that might fall outside of these restrictions - such as the Heavy Ballista - that we'd be more than happy to poll as part of the Community Consultation process to address concerns around balancing, especially with respect to PvP.


Finally, we wanted to dig a little deeper into the idea of 'Prestige' and HiScores.


'Prestige' on a restricted account is a status granted to accounts which have never gained a level's worth of XP in a skill they are locked out of. Meaning if you're a Skiller but complete Fremennik Trials and would have received several thousand combat experience, you would lose your Prestige status, while an account that's never gained or 'blocked' more than 82 XP in any combat skill would remain a Prestige account.


Prestige and non-Prestige accounts would share the same HiScores, meaning Skillers who complete Priest in Peril would share the leaderboards with Skillers who've never even heard of combat XP. Currently, there are technical limitations that prevent us from separating accounts in this way, but we also feel like the number of HiScore tables needed to accommodate Prestige/non-Prestige variants for each different game mode would lead to an undesirable amount of 'bloat' when trying to browse who's at the top of the ladders.

We hope this clears up some of the questions you've been asking following the Summit, and provides you the information you needed to know ahead of the polls going live on December 20th. In the meantime, make sure to familiarise yourself with the rest of this year's Winter Summit by checking out the Summary Blog here.