We’ve secured another page from Professor Tony’s Archaeology Journal. This time, he’s been digging up some information about somewhere called Warforge! Let’s take a look…

Wahey! Another potential dig site has been uncovered!

Those crackpot wizards in Yanille reported a strange blue glow emanating from the direction of Oo’glog some months ago, but it wasn’t until recently that anybody bothered to march down there and take a look – but goodness, I’m glad they did!

It seems as though the recent dismantling of the Mobilising Armies arena disturbed the earth somewhat, and somehow this disruption must have attracted the source of the mysterious glow: a dozen or more excitable little creatures that I’ve tentatively named ‘Time Sprites’. It seems they’re just as interested in the history of Gielinor as we are! 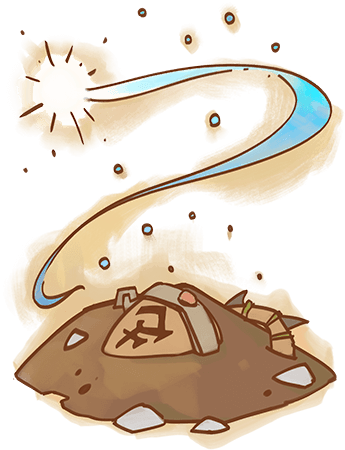 They led us to a trove of the strangest artefacts I’ve ever laid eyes on. Shields, helmets, and mail, all decorated with tribal goblin symbols, but of such intricate design that I cannot imagine they were made by the goblins themselves. I have sent a sample off to two of our most esteemed goblin experts to see if they can provide some answers…

Why you even ask Bentnoze? He know nothing about proper goblin culture! He only care about fancy Big High War God stuff. Probably ugly Bentnoze should go live in the Warforge! if he likes War God so much.

You call when you have good goblin stuff to buy. No more weird rubbish!

Next time you send this stuff straight to me. Me smart goblin, not like stinky Wartface. 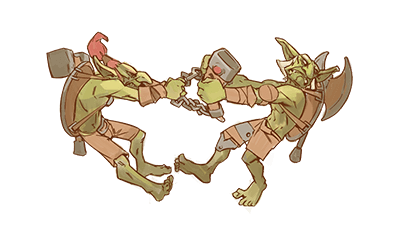 Ugh… I don’t know what I expected. Neither of the Goblin Generals could tell me anything about the artefacts I sent them, and what’s worse, several of the objects came back with goblin-shaped dents in!

Interesting that they mention the Warforge! though… that name has cropped up in quite a few of the Feldip Hills histories I’m reading. From what I can tell, it was some kind of military institution, closely affiliated with Bandos and his armies. But the records don’t say much about what went on there – only that young goblins were sent in, and hardened warriors came out. Scary stuff!

If only there was someone intelligent out there who also has excellent knowledge of goblin culture… and no desire to bash someone over the head with the artefacts they find. Well, I can’t think of anyone who matches that description.

Maybe I’ll go check on the Monolith before bed…

Goodness! I woke just now to the sound of something outside the window. I thought it might be those blasted journal thieves again, but when I opened the casement to investigate further, a letter fell out! It seems I have an anonymous source of information – and what juicy information it is!

You do not know me, but I know much about you. For example, I know that your investigation has led you to the Warforge!.

A… friend of mine, shall we say, has strongly suggested that I step in as an expert. The Warforge! is of great significance to the goblin tribes, as it was both the site of their greatest triumphs and their greatest tragedy.

I know many stories about the Warforge! and none of them are good. Yes, it is where Bandos trained his armies, but it is also where he pitted his loyal minions against each other in bloody battles to the death. The survivors were sold off as mercenaries, and Bandos used his profits to build ever more terrible machines of war.

But at some point, everything changed. Legend has it that just before Bandos was banished at the end of the God Wars, he collapsed the great underground structure… with his armies still inside. I suppose he decided that if he could not have his toys, nobody could.

The time that followed is known only as the ‘Forge Wars’. Nobody knows for sure what happened in the ruins of the Warforge!, only that a few lucky goblins escaped – and then they never spoke of their experience again.

I’d be delighted to join your expedition, if you’d let me. To be completely honest, I have my own reasons to uncover the truth of what happened at the Warforge! – and I think you’ll need someone who’s used to the dark.

Well, what am I to think of that? A sneaky stranger, lurking in the shadows outside my window? Surely there are less sinister ways to send a letter. But it seems that this stranger, whoever they are, knows more about the Warforge! than anyone else I’ve spoken to. Perhaps they can be of help after all…

Uh-oh, Tony seems to have caught on to our shenanigans. Just to be safe, we’d probably better not steal any more Journal pages.

If you’re looking for more information about Archaeology, then you’ll just have to wait for the Road to Archaeology videos, where you’ll learn all you need to know about how the skill works.

Until then, happy ‘scaping!