After reviewing the effects of yesterday's hotfix and reading your feedback, some of the changed XP rates are going to be re-adjusted.

Our goal for the new dungeon Below Ice Mountain was to create a place where low-leveled, non-members get the chance to experience other types of Mining found in Gielinor (such as in the Motherlode Mine).

In line with that aim, the following will be implemented via hotfix today at approximately 14:15 BST:

All the feedback you've given is massively appreciated and we'll continue to monitor the changes and review any other suggestions you might have.

It's been amazing to see so many of you delve Below Ice Mountain! There's been a lot of feedback, and we've got some changes we'll be making based on what you've been saying.

The following will be implemented via hotfix today, at approximately 14:15 BST:

The team hope you continue to enjoy the content in our newest game update. We'll keep on monitoring activity in the ruins and adjust issues accordingly as per feedback.

It's time to uncover the secrets of Ice Mountain in our new free-to-play quest! We've also tweaked Tempoross and souped-up the seedbox. Read on for more! 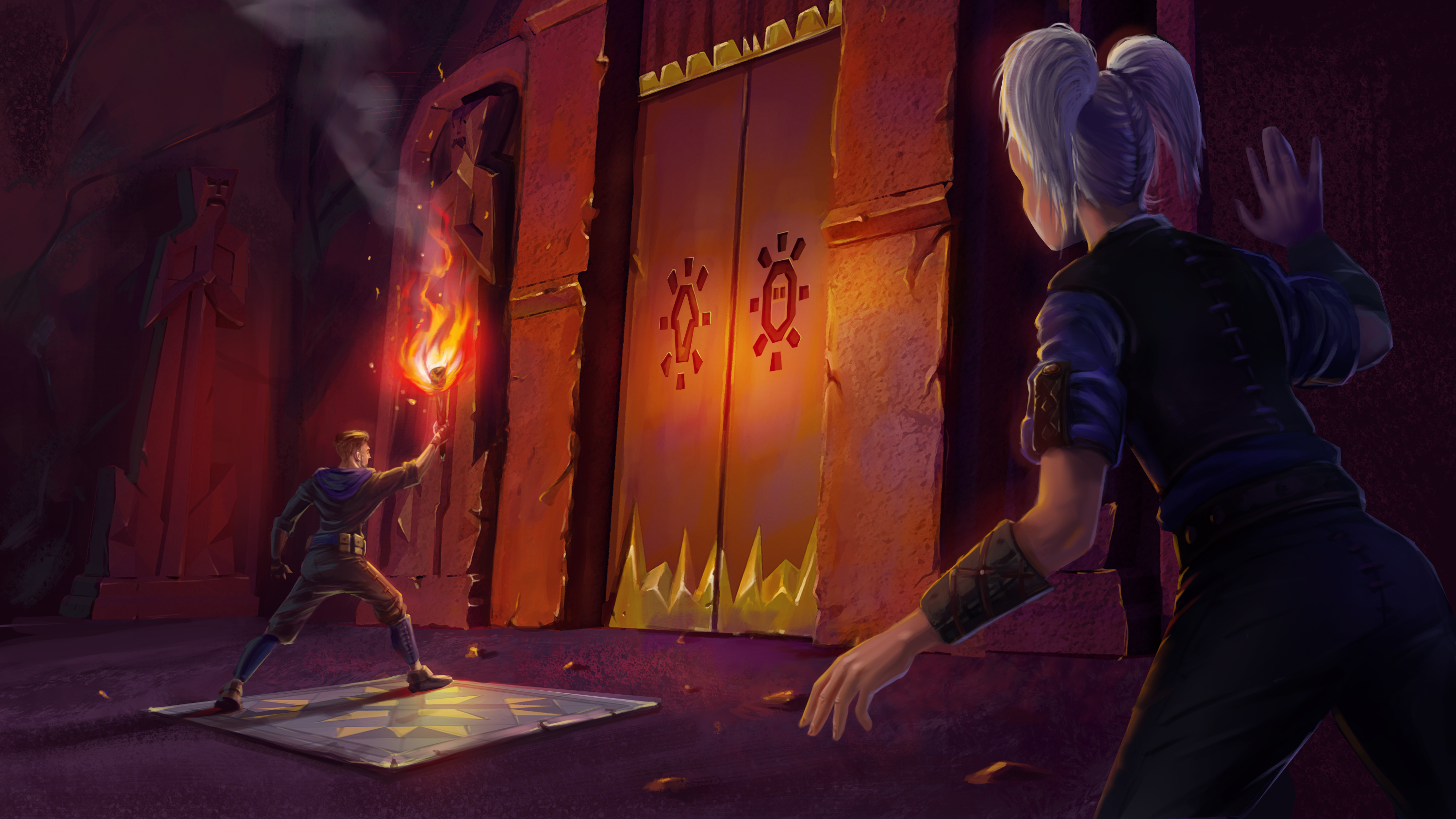 Willow, an energetic archaeologist (perhaps suspiciously so) is hunting for her next big discovery. She believes she has found the entrance to ancient underground ruins just to the west of Ice Mountain. There's a catch though - it's sealed tight and she needs to re-unite her old crew to help her break in.

Naturally, she has to stay close to the ruins (south of Ice Mountain, near the Dwarven Mines) in order to lay claim to the find. It therefore falls to you to bring her rag-tag group back together for one last caper and a final big pay-off! 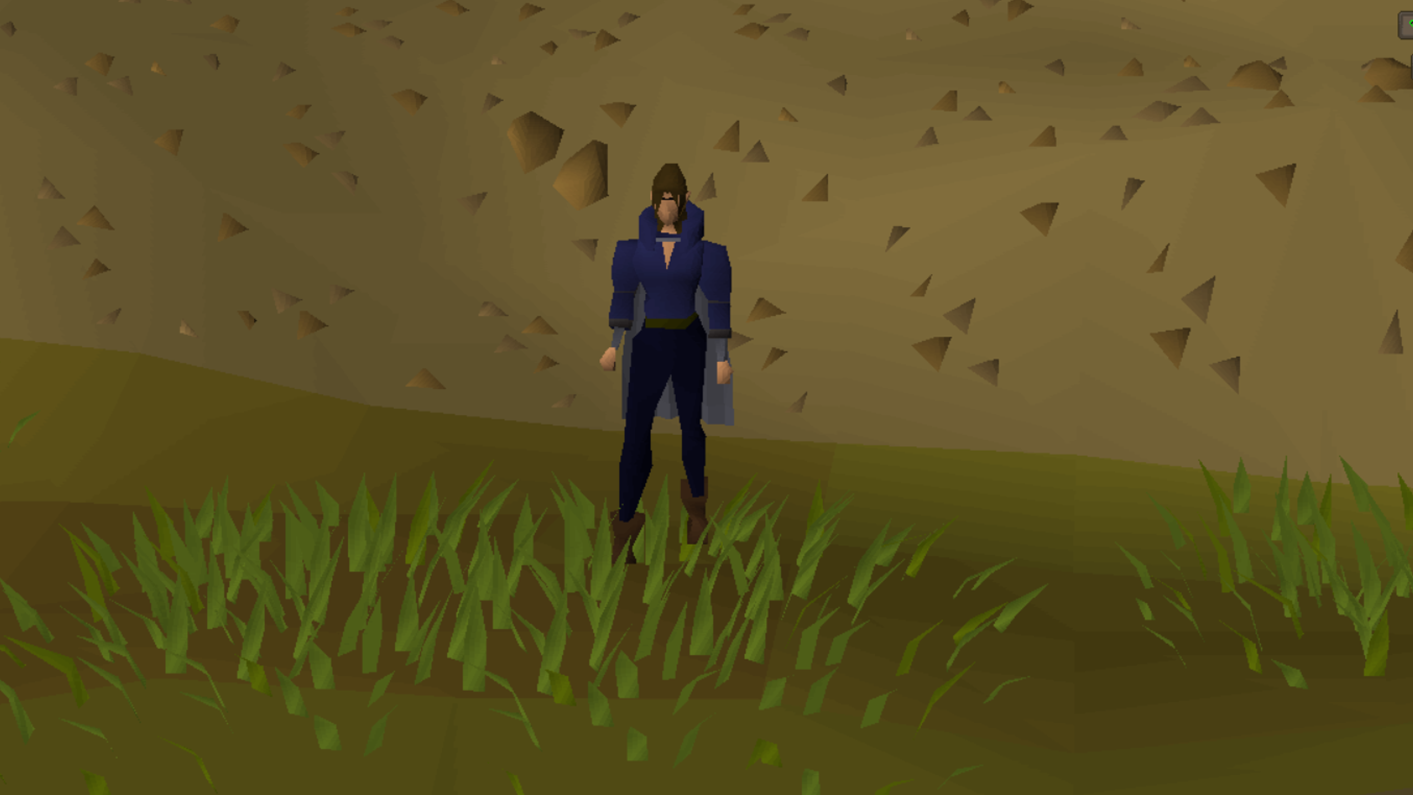 Willow waiting for a gullib... err, we mean a brave adventurer!

Burntof is an old dwarf with a penchant for demolition, Checkal is a well-built lifter of heavy things and Marley is a cunning thief with a knack for disarming traps. 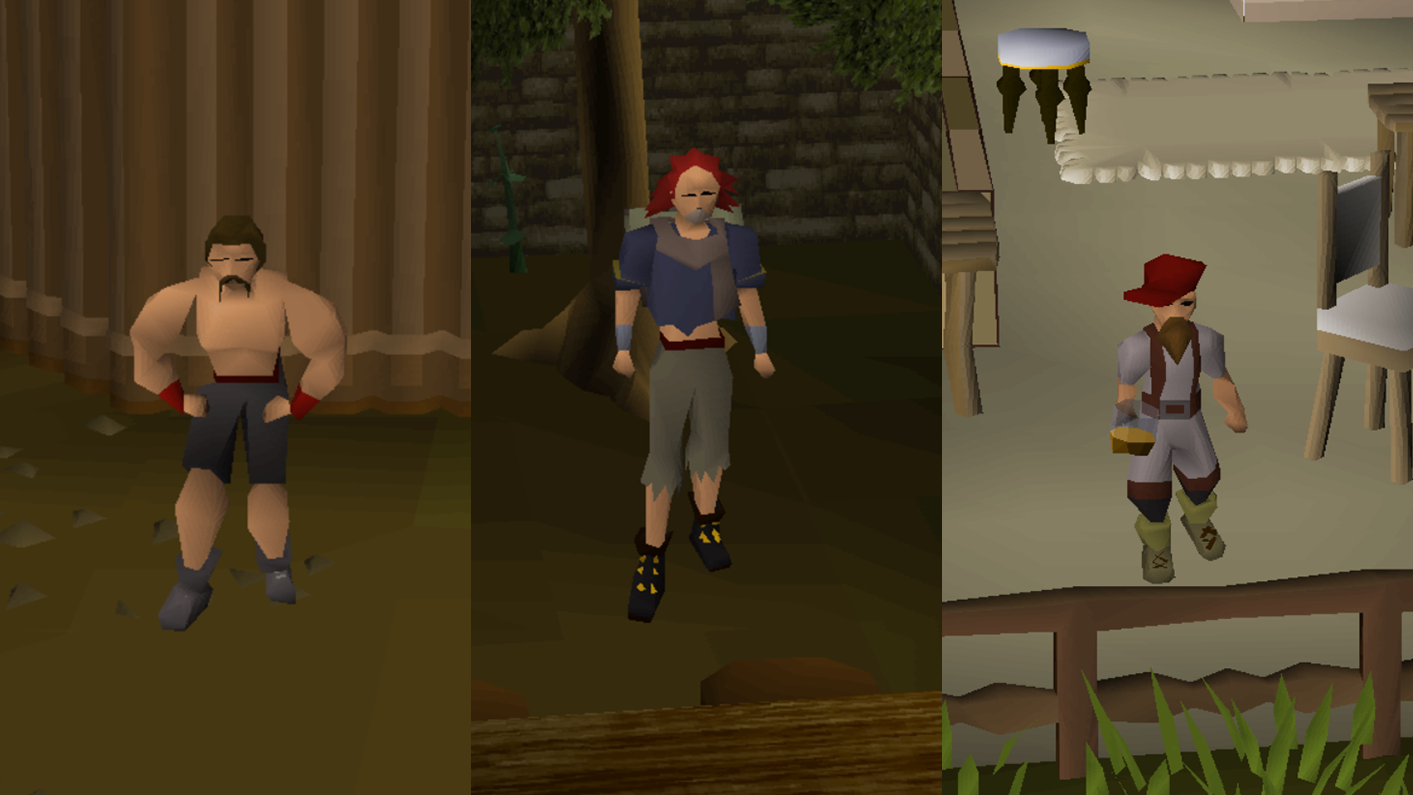 A lifter, a thief and a dwarf walk into a bar...

Together, they have the talents it will take to gain entry to the secret ruins. But persuading them might not be easy. See, the gang aren't all too keen on working with Willow again, and her intentions might not be as honourable as she claims...

Once the quest is complete, you'll have access to the dungeon below Ice Mountain. These ruins are packed with lore, but we're keeping those cards very close to our chest for the moment. Read on for a spoiler-free guide to what awaits:


Activities In The Ruins

Within the ruins is a great forge powered using Barronite, a unique material that can only found there. Somebody within the ruins believes it is their duty to keep the forge lit, lest the flame be diminished forever. This somebody is perhaps a few years past their prime and, with failing eyesight, will reward anybody who helps to gather vital Barronite...

There are a range of rewards for handing over the Barronite, most notable of which is access to the Vault. What's so exciting about this Vault? Well, it contains many treasures belonging to the old inhabits of the ruins, and they are all yours for the taking! However, to get the lock open you'll need to offer Barronite every time you want to enter.

Barronite can be gathered while skilling within the ruins, so you'll be gaining XP as you go. The activities available are primarily aimed at low-ish level free-to-play adventurers with the intention of filling notable gaps in free-to-play skilling. Let's take a look at some of them:

The caves deep below Ice Mountain are home to various rare cave fish. In ancient times, it was tradition for these fish to be used as religious offerings.

Players can offer cave fish within the ruins to train their Prayer skill. You'll need to perform the same ritual used by the long-departed inhabitants of the ruins:

Players will either need a small net, big net or fishing rod to catch cave fish within the ruins.


Players will also sometimes find Barronite when fishing. Plus, there's a rare chance of catching a Barronite Handle (see below). The fish caught here cannot be traded.

There are a few cave eel to be found (members only). They can't be used as an offering, but are a source of food. You'll also have a chance to receive the Heron pet when fishing for cave eels.

With fish in your net, players will need to head to one of the old preparation tables with a knife. But be careful how you cook, budding chefs - it's possible to mess up and ruin the fish. The chance of failure is dependent on your Cooking level, so bring your culinary A-game!


The prepared fish cannot be traded.

With your fish prepared, it's time to make an offering at an ancient altar and train that Prayer skill!

The old inhabitants of the ruins controlled Golems, programming them to do many tasks. The Golems were fuelled by runic energies and imbued with the power of the Body and Mind altars. It was hoped that they would one day become more self-sufficient and be freed of the requirement for programming - but the magical arts are never predictable. The unstable energies of the nearby Chaos altar slowly seeped in the Golem Cores, corrupting them and filling them with uncontrollable power. The dangerous Golems were sealed away in the ruins for good. 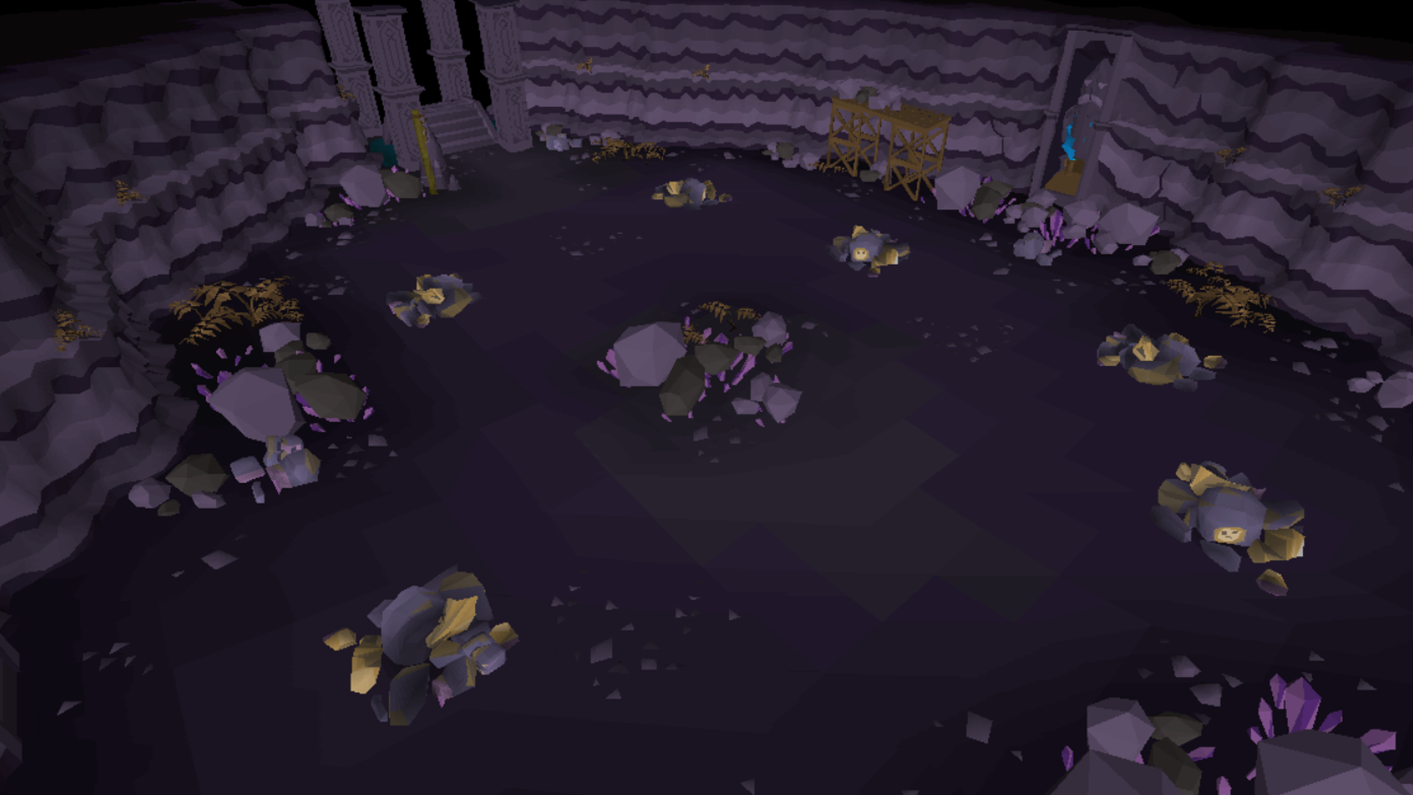 These look tougher than a Graveler!

Players can hunt and kill Golems within the ruins. When defeated, they will sometimes drop their corrupted Cores, which can be used at the relevant Runecraft altar to gain XP and runes.

Players can find the following golems in the ruins:

Players can use the Cores to train their Runecraft skill, offering them at the relevant Runecraft altar for XP and runes. Each Core offers more XP and runes than a single essence, meaning fewer trips to the altar. However, this benefit is offset by the time it takes to obtain the Cores.

C'ore blimey... how long has this been here?!

Barronite rocks can be tackled at 15 Mining. Mining here will work similarly to the upper-level ore veins in Motherlode Mine (ensuring the rocks can be worked in groups).

Players will get around 25 XP per Barronite mined, and finding a deposit will yield some additional XP.

Players with 15 Smithing can break down Barronite deposits with a hammer at the anvil within the dungeon, and obtain various items:

Ancient Relics can be handed in at the Varrock Museum for coins. In addition, members also get Kudos for the first Relic they hand in! The Barronite Head and Broken Barronite Hammer, meanwhile, can be made into new items (see below).

When Smithing, players will get around 37.5 XP per deposit. We will be monitoring drop rates and will adjust them accordingly once we've received more data.

The Vault is buried deep within the ruins - just hand in your Barronite to gain access! As we mentioned above, it was used by the ancient inhabitants of the ruins to store treasure, so it's well worth a gander. But there's a catch. Each payment of Barronite allows just one entry, and players only get a limited time inside before they are forced out by the ancient security systems.

The Vault itself is maze-like, and home to many chests. Players have one minute to loot as many chests as possible and then reach the exit. If the player doesn't make it out in time, all the precious bounty will be lost!

Making things even more challenging, the locations of chests - and the loot within them - will be randomised. Similarly, doors will at times be blocked off, forcing the player to think fast and dash down alternative paths.

Players will be able to stack Barronite payments to make Vault entry more convenient. For example, a player could pay for 20 entries in a single transaction. Smooth.

In addition to all of the above, the ruins offer new and unique rewards! Snag yourself one of these:

An untradeable mace that was once used by the ancient inhabitants of the ruins. Players need to find three components: 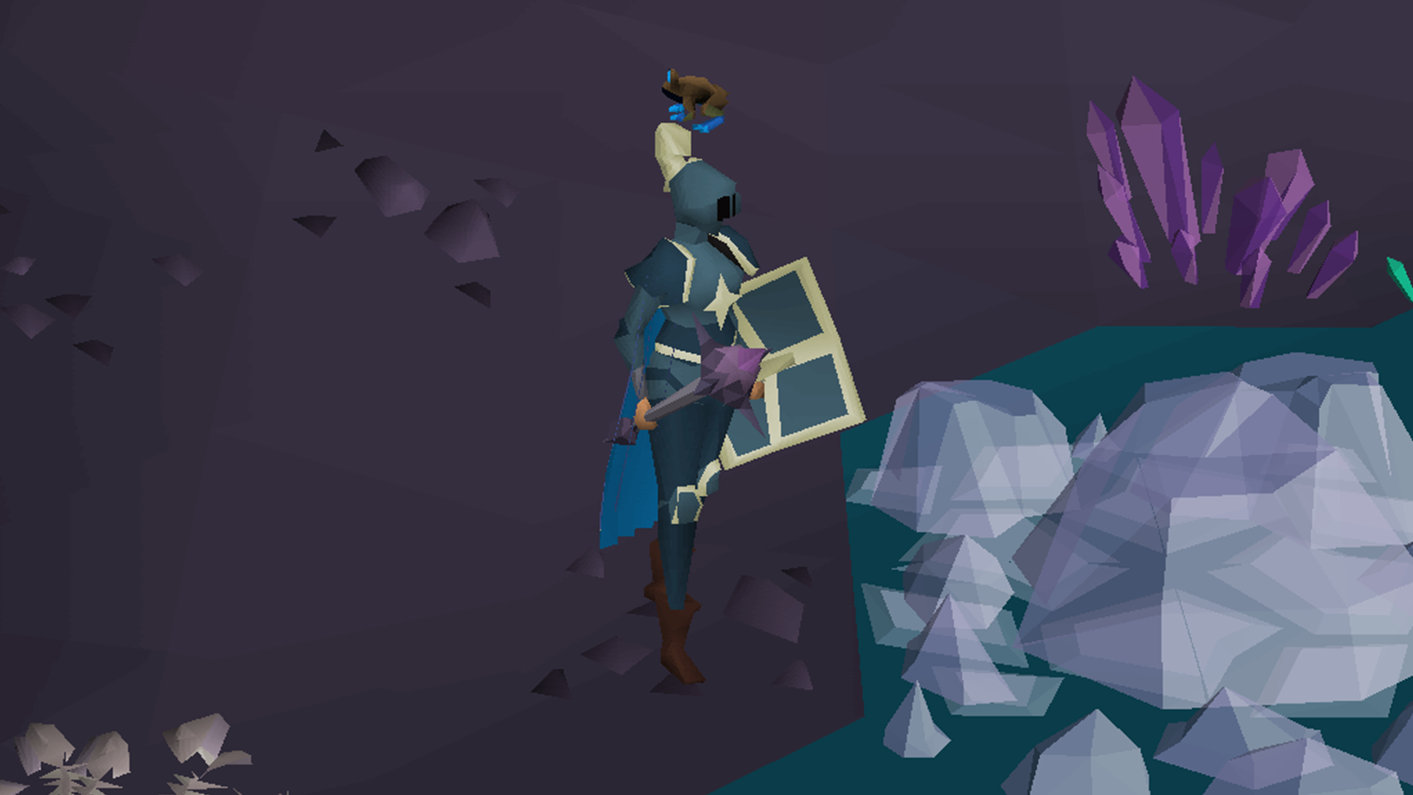 Smash your way through golems with the Barronite Mace!

Once you have all three components, a character within the ruins will tell you how to combine them to finish the Barronite Mace (you'll also need some Barronite, obviously - the clue's in the name!). The Mace is positioned slightly below the Rune Scimitar. It's a useful crush weapon for low to mid levels, and requires 40 Attack.

This Mace also comes with a unique effect - it's a golembane weapon. That means it will provide extra accuracy and damage when fighting Golems!

As the item is untradeable it will behave similarly to items like the Fire Cape on death.

This is a members-only, untradeable hammer that was once used as Smithing equipment by ancient dwarves. It's been a while since it's been much use to anyone, so you will first need to find the busted version while breaking down Barronite deposits. A character within the ruins will tell you how to repair it. 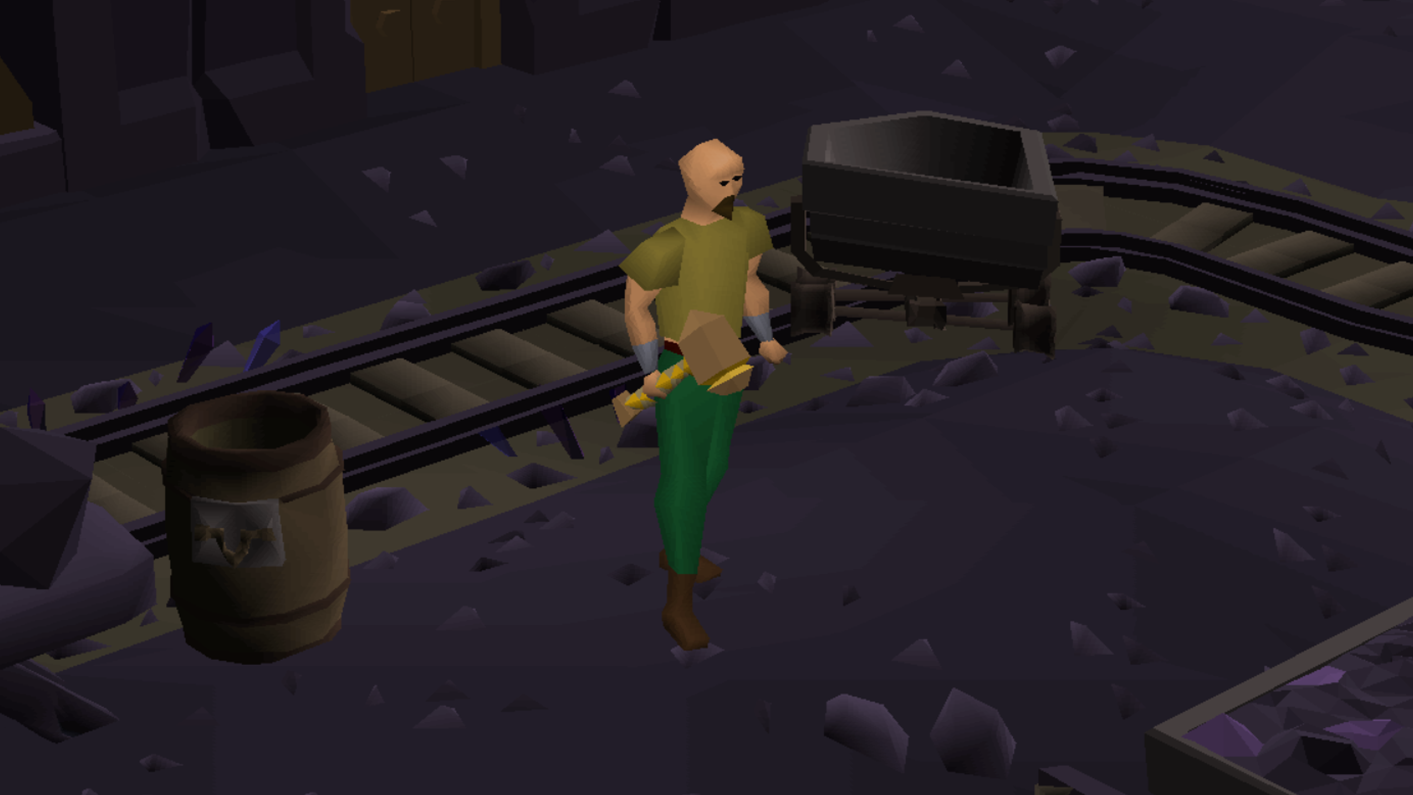 It will function as a normal hammer when skilling, but because it can be equipped in the main-hand, it frees up an inventory slot. Note that the hammer has no combat stats when equipped.

Players will also be able to spend Barronite to unlock various buffs and effects that work only within the ruins: 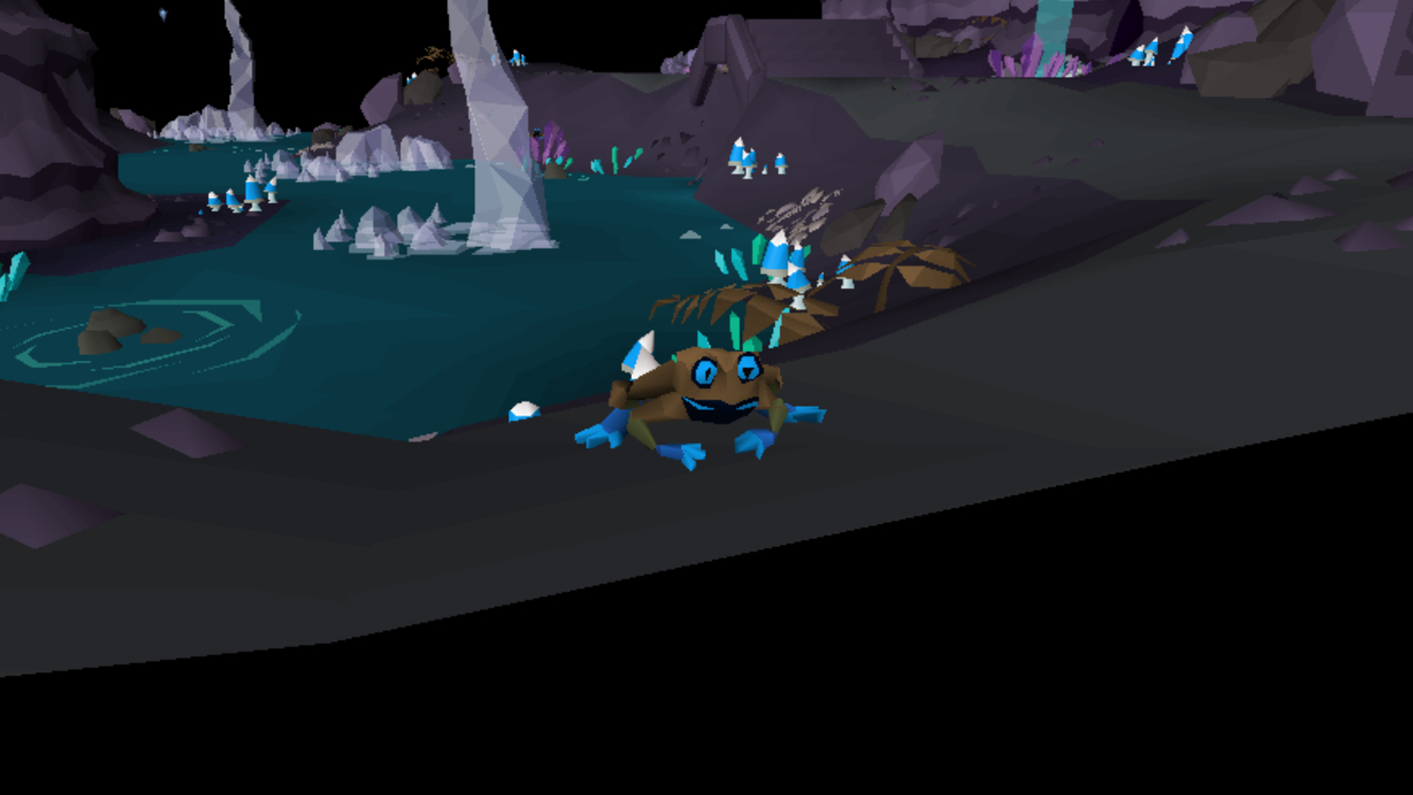 And that's everything for Below Ice Mountain and our new free-to-play dungeon area. We can't wait for you to delve deep into the mysteries of these strange and wonderful ruins. What will you uncover?

Items that require setting up (e.g. Dwarf Cannon, Mithril seeds, Hunting Box, etc) can no longer be used on the Tempoross lobby ship. You can no longer light fires here either.

Fishing XP may now be gained in Tempoross encounters on W45.

Players can no longer stall to run through fires.

Points from dousing fires and fixing totem poles have doubled from 20 to 40. Get splashing!

The tackle box can now be used to store the Pearl Barbarian Rod, Tiny Net, Molch Pearls, Merfolk Trident, Dark Flippers and all variants of the Trailblazer Harpoon.

Stackable fish can no longer be stored in the fish barrel.

The messaging when subduing Tempoross has been slightly tweaked.

It will now behave as follows:

PvP deaths act the same way regardless of location. The pouch is destroyed and its contents awarded to the PKer.

The PvP world rota has moved to Period B.