Chambers of Xeric Revisited
Following the huge Kebos expansion, we'd like to turn our attention to improving some older content. There's lots in the game that could do with improvements, whether small tweaks or a major rejuvenation. For now, we'd like to start with the Chambers of Xeric. Traffic through the Chambers has remained strong over the two years since they opened, but there are a lot of points that players would like us to smooth out for them. Most of these are changes to room balancing or scaling mechanics that we'd not normally expect to poll, but the Xeric's Ward scrolls detailed below are a substantially new feature that will be polled. 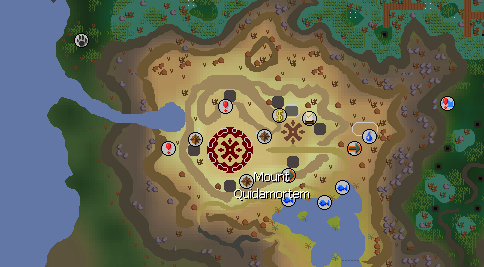 But, first, an apology...
Since its announcement at RuneFest in October, many of you have been asking about the Bounty Hunter rework that we pitched, in which additional rewards would be earned by performing assigned tasks such as killing one's target with a dragon scimitar, etc. While we did address quite a lot of Bounty Hunter issues later in the year, we weren't able to design and deliver that scale of expansion within 2018, at least not to the standard you all deserve. We're very sorry this didn't take place in 2018 as expected. However we would still like to proceed with that proposed expansion of Bounty Hunter. To ensure the content is high quality and meets expectations, our community staff will be discussing the design plans with prominent members of the BH community, regarding suitable tasks and rewards and game mechanics. A full dev blog can expected in the coming weeks. In the meantime, however, we'd like to improve what we can in the Chambers of Xeric...

General dungeon stuff
Let's kick off the list with some straightforward tweaks: A popular request is to let a dungeon instance remain open with no players inside. Unfortunately that's not something we'd be able to offer; the engine needs to be able to create enough instances for everyone on the world, even if the world is busy, so its ability to preserve empty instances is very limited. If we become able to do that in future, we'll be happy to revisit this topic.

Room balancing
Some rooms are far less popular than others, driving players to scout their raids in advance so they can keep re-rolling until the game gives them a random layout they're willing to accept. That's not exactly a pleasant thing to do, especially for a solo raider who can't leave the instance empty to visit the bank.

Xeric's Ward scrolls
As some rooms are nicer than others, this drives players to scout the room layout and re-randomise the cave repeatedly until they get a "random" outcome that they like. The aim of these changes is to help bring the rooms towards parity, so that there's less incentive to spend all that time repeatedly re-randomising the cave. That said, it's inevitable that players will continue to prefer some rooms over others. Rather than just leaving you to keep re-randomising the cave blindly, we'd prefer to let you earn something that influences what rooms you get, earning it by raiding in the Chambers. To that end, we'd like to introduce Xeric's Ward scrolls. When Xeric was exploring the caverns, all those years ago, he imbued some scrolls with power to protect his forces from the perils of the Chambers. This was especially important for Vespula, since she is not native to the Chambers and Xeric had no direct control over her, but even the threats he created himself (Tekton, Vanguard, Vasa Nistirio, etc.) needed to be kept at bay while Xeric's forces were still using the Chambers. 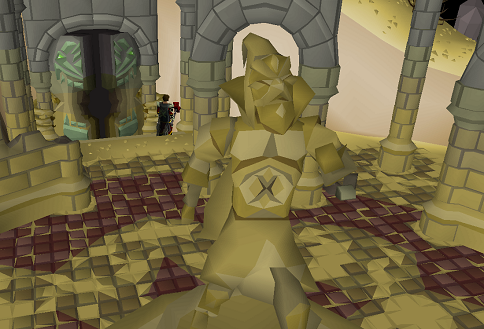 Xeric created a range of scrolls to repel the various denizens of the Chambers. One type keeps Vespula at bay, another works on Vasa Nistirio, another works on the Creature Keeper's monster, etc. Through the power of these scrolls, Xeric's forces were able to navigate the Chambers with reduced chances of encountering the various threats. The scrolls were abandoned in the Chambers when Xeric moved on, and now may occasionally be found by a raiding party. For example, to get a chance of finding Vespula scrolls, the party must have survived a raid that contained Vespula, with similar requirements for the other scrolls. This is because a party who encountered that room seems to have traversed the Chambers via a route where such a scroll wasn't in use - so maybe the scroll will turn up in the chest at the end. A scroll would be given in addition to the existing loot, without affecting the chances of receiving other items; we'll be expanding Xeric's reward chest to accommodate this and the clue scroll change described above. Scrolls would be tradeable, and would have a cash value that lets you alch them for 6k coins if you don't want them. Once you've got a scroll, you'd be able to read it, absorbing the power of the scroll into yourself, so you needn't carry the item around. Next time you're a party leader, with the Chambers generating a route for you, the affected room will be skipped on the next time the Chambers considered giving it to you. This consumes the power of the scroll. You can read lots of the scrolls, absorbing all their power into yourself, where it will remain until it's consumed. For example, you might have absorbed enough scrolls to dodge 8 Vespula rooms, 2 Muttdile rooms and one Ice Demon. On your next raid, the Chambers might give you a route free of Vespula and the Ice Demon, leaving you with the power to dodge another 7 Vespula rooms and 2 Muttadile rooms. Obviously there's only a finite number of room types, and the Chambers can't have you dodging them all, otherwise you'd have a ridiculously easy ride. For that reason, the Chambers will only let you dodge 2 combat challenge rooms and 1 skilling room per raid. (The Ice Demon counts as a skilling room for this purpose, since its brazier phase is more significant than its combat phase.) A board outside the dungeon will allow you to see how many more scrolls you've absorbed of each type. If you're in a party that's in its Recruiting phase, the board will try to find the leader and display for you how many scrolls they've absorbed. N.B. As this method of influencing the contents of your dungeon is earned, we'd prefer that players not be able to bypass it for free by using an alternate client to scout the dungeon and re-randomise over and over again until they get a "random" outcome they like, for free. This means that we'd need to remove scouting, though we know that's a really big deal for players, and we'd prefer to work with you to make a feature you'd be willing to accept, so please share any other constructive suggestions you've got for influencing which rooms you'll encounter without simply re-rolling "random" outcomes indefinitely. We'll be collecting your feedback and ideas on this forum thread.
Poll Question
Should Xeric's Ward scrolls be introduced, as described in the blog, allowing players to reduce their chances of encountering a specific room when generating a Chambers of Xeric instance?

How we'll proceed
If players are interested in this idea, the Xeric's Ward scrolls will be offered in a forthcoming poll. The other changes to the balancing and mechanics aren't planned to be polled, but please let us know if you object to anything here, with your reasons. We'd expect to apply the relevant balancing changes to the Challenge Mode too. This would require us to bring the target times down slightly; we'd not be able to confirm exactly how much until we've been able to do some time-trials.

We know these aren't the only issues you may want us to address in the Chambers of Xeric. Realistically, we're not going to be able to try solving everything at once, which also means we'll be limited for bundling extra requests into this batch - other parts of the existing game need dev time spent on them too. However we don't expect this to be the last update to the Chambers of Xeric, and we would be able to address more issues in future updates.