Welcome! The big news this week is the arrival of Combat Achievements – a sweet new way to measure how tough you are and score some juicy rewards for said toughness. Plus, we’ve made a couple of changes to the Gauntlet. So, find yourself a spot in the shade (or a seat by an air conditioner) and let's get stuck in!

Have you smashed your way through the many bosses of Gielinor in a dozen different ways? Want some recognition for your mad skills? Well, you’re in luck, because Combat Achievements is designed for precisely that!

It's worth mentioning that all kill count tasks and Gauntlet speed tasks are retroactive, meaning that these tasks will include your previous amount of kills or your previous recorded times within The Gauntlet, as this was the only area completely unaffected by the Equipment Rebalance. All other speed tasks will have to be completed after the update goes live. 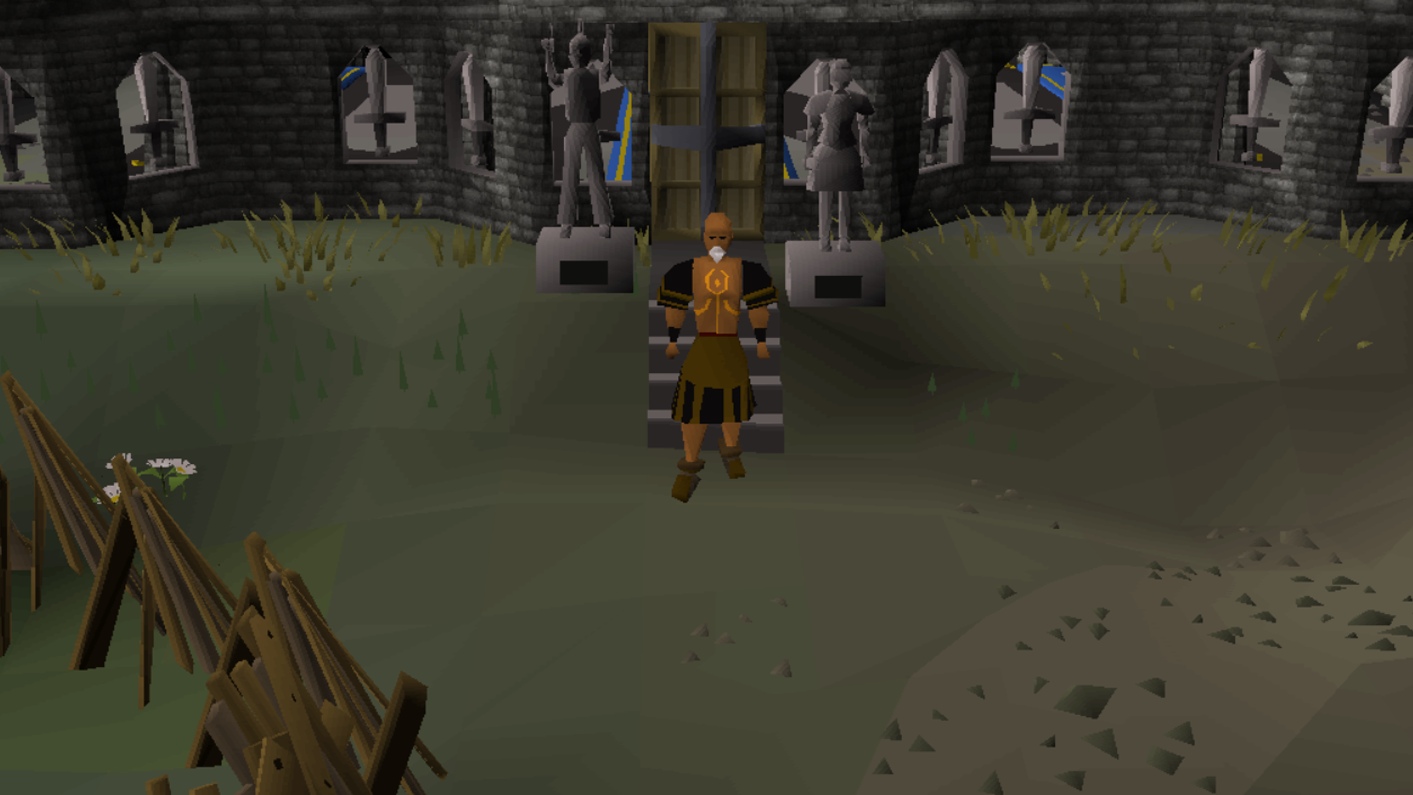 Ghommal is your go-to NPC for Combat Achievements. He hangs around outside the Warriors' Guild in Burthorpe, and will be your one-stop shop for information and hard-earned rewards (more on that shortly). 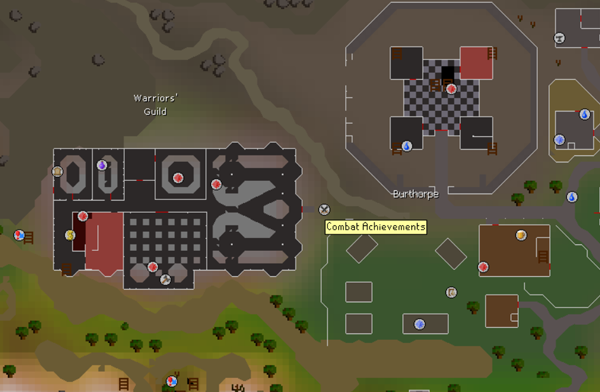 To implement a new Combat Achievements interface, we’ve changed a few things around on the Hub. Open the Quest Panel and you'll see the Minigame Interface is no longer there (it’s now in the Clan/Social Panel instead). 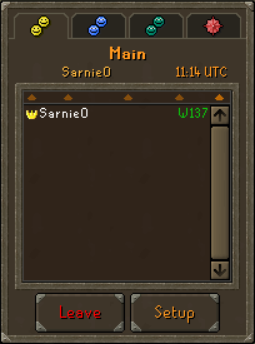 In its place, a new coloured star symbol has appeared. This is effectively your portfolio of accomplishments, from the number of quests you’ve completed to your time in-game. You can also view the Collection Log and access all of its features by clicking the relevant info box. 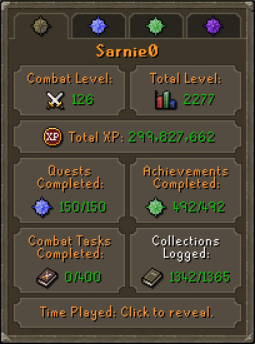 This is where you’ll track your progress and Combat Achievements. Click on the 'Combat Tasks Completed' info box for an overview of how many tasks you’ve nailed in each category, plus fun extra stats like your top bosses and how many times you've sent them packing! 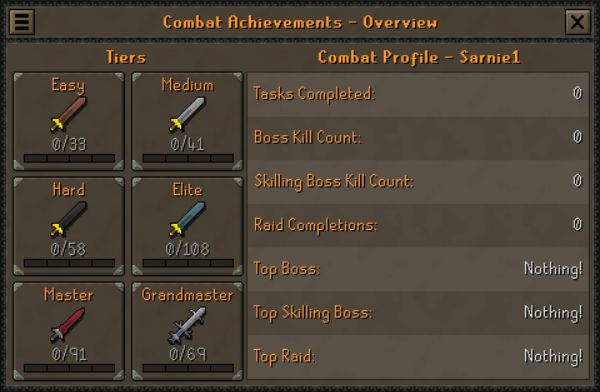 By clicking each box on the left, or using the three-lined icon in the top left corner and selecting Tasks, you can see a detailed list of what each Combat Achievements tier has to offer. Click the plus icon next to a task to see what you need to do.

We’ve also provided a handy filter bar to help you refine your task lists and choose relevant goals to suit your current mood. You can filter tiers, types of task and specific monsters or areas. You can also exclude your complete or incomplete tasks.

If you want a full list of tasks available with the launch of Combat Achievements, our wonderful friends at the OSRS Wiki have got a complete list here. Check it out! 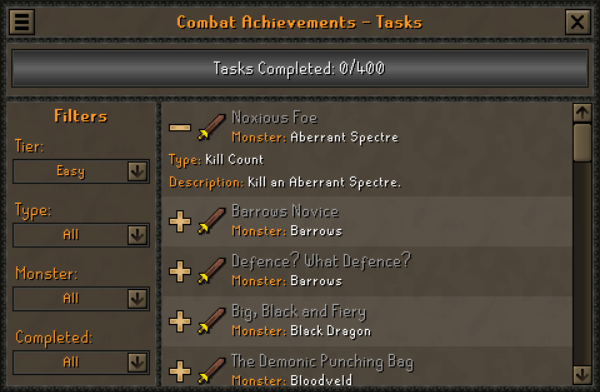 From the three-lined icon previously mentioned, there are also two additional screens you can access: Bosses and Rewards. The Bosses screen will let you view your task progress on each monster individually, so you can keep track of your ongoing feud with a particular nasty. 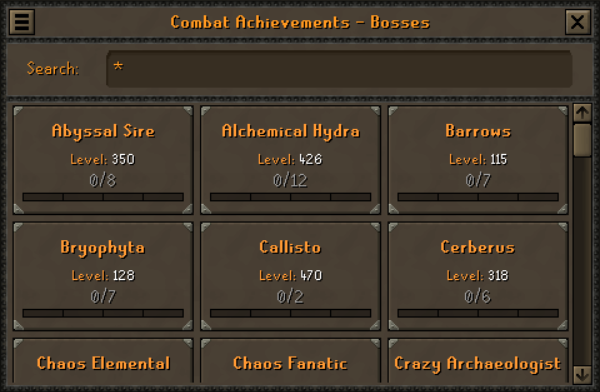 Clicking on each boss gives you a detailed overview, including:

You can also reset your times on this screen. This can be done at any time, but will require your PIN. 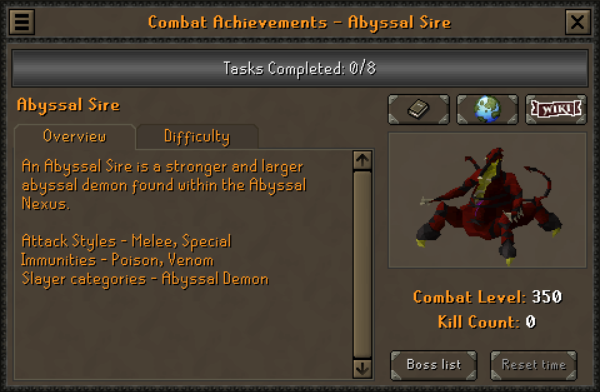 The final section of the Combat Achievements screen is all about those hard-earned rewards! You’ll unlock this section when you’ve completed every task in a single tier. As previously mentioned, rewards are claimed by speaking to Ghommal.

Every tier comes with an upgraded Ghommal's Hilt. At the final tier (Ghommal's Hilt 6), this equippable off-hand item will give you unlimited teleports to Trollheim and Mor Ul Rek. Much like the Quest Cape, if we add new tasks to a Combat Achievements tier with future content, you'll have to complete these new tasks to regain access to that tier Hilt and any above it.

Each tier also gives you an XP Lamp (which increase in value as you climb through the ranks) and a set of bonuses that will make taking out Slayer monsters a bit more enjoyable. Some tiers also feature recolours for the Dragon Hunter Crossbow and Slayer Helmets, so be sure to keep checking this panel! 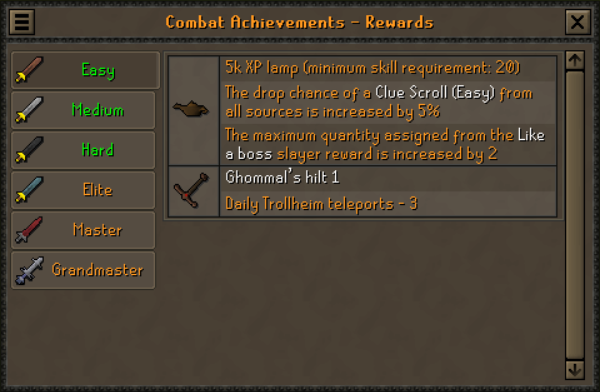 As a bonus, Clans will now have the option to broadcast Combat Achievement tier completions, so you can share your successes with your Clan mates!

As part of the Combat Achievements update, one of the rewards unlocked is an increase to certain clue drop rates. Clues obtained from skilling were particularly tricky to apply this to.

Previously, there would be one roll per skilling action to determine if you would get any clue. If that roll was successful then a secondary roll was made to determine what clue you should receive. This was fine in itself, but if we wanted to only buff one specific tier of clue it would quickly become troublesome.

For example: if you rolled for a Medium Clue, but you already had one, then it would try and give you the next tier of clue. This meant that your chance of receiving, let's say, an Easy Clue, could vary from a 40% chance to a 100% chance depending on what clues you already owned, assuming you pass the initial skilling clue roll.

So attempting to increase the drop rate of Easy Clues would directly affect your chances of obtaining other tiers of clues, which was undesirable.

We've now reworked the system as two independent rolls, so in our example above, your Easy Clue will no longer have its drop rate affected by the other clues in your possession. Theoretically, this also means you can receive multiple different clues in one skilling action.

Because this inherently nerfs the potential best drop rate of Easy to Hard Clues, they have been made more common to compensate. They should now be closer to the 'best' drop rate pre-update.

To kick off the release of Combat Achievements, we're throwing in some extra thrills with six competitions and some fantastic prizes!

There are six tiers to Combat Achievements, and we'll be awarding the first players to complete each tier. Here's what you could win:

The first player to complete the Easy tier of Combat Achievements will receive a year's membership!

The first player to complete the Medium tier of Combat Achievements will receive a year's membership!

The first player to complete the Hard tier of Combat Achievements will receive a year's membership!

The first player to complete the Elite tier of Combat Achievements will receive a year's membership and a King Black Dragon building set!

The first player to complete the Master tier of Combat Achievements will receive a year's membership and a King Black Dragon building set!

The first player to complete the Grandmaster tier of Combat Achievements will receive a year's membership and a King Black Dragon building set!

Both start today and will run until completion of the competitions. View all the Ts&Cs by visiting our forum thread.

Need a way out, sharpish? Players can now create Escape Crystals, which are a one-way ticket out of the Gauntlet! They cost 200 shards each and can be made at the Singing Bowl in the first room. Left-click a Crystal to get the hell outta there.

You can also make the Crystal Paddlefish, a new combo food, by combining a Paddlefish with 10 Crystal Shards at the Singing Bowl. You score 5 XP in Crafting and Smithing for making them, and eating them will heal 16 HP. Bon appétit!

A Last Message From Mod MikeD

After a couple of very exciting years, the time has come for me to leave Old School Runescape. I wanted to take the opportunity to let you all know how much I appreciated getting to work on such a legendary title.

I’ve learned an invaluable lesson about community and what it means to be a part of such a passionate development team. I wouldn’t trade this experience for anything.

I know we leave something of ourselves behind when we go, I just hope I left something good.

The PvP rota has moved to Period B: