This week’s update introduces the Sins of the Father quest, the city of Darkmeyer, and the Hallowed Sepulchre.

Sins of the Father Quest 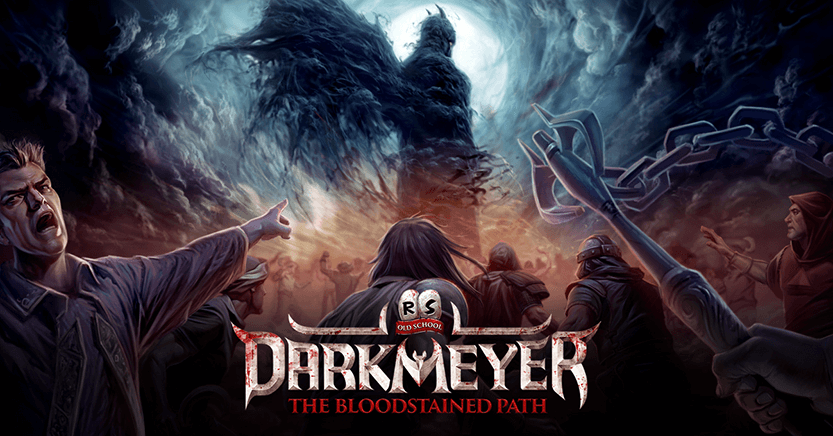 We'd like to apologise for any inconvenience, due to a problem with players' save games we're turning the game off temporarily.

We're just as excited for Darkmeyer as you are, and we're working to bring the game back online as soon as possible.

We're going to rollback the game which will mean it remains offline for a few hours. We'll keep you updated throughout.

We'd like to apologise again, and we greatly appreciate your patience whilst we resolve this issue.

As the rollback process begins, our aim is to rollback the game as close to the game update as we possibly can.

The rollback process is still progressing as planned. We'll communicate any updates as soon they're available.

The team is continuing to test the game worlds since the update has been rolled back. Thank you for your patience whilst we continue to do essential testing.

We're slowly re-opening the game worlds. We'd like to thank everybody for your patience.

The Ring of Endurance (uncharged) currently cannot be traded on the Grand Exchange but can be traded between players manually. We will look to hotfix this after we know the game update is stable.

A small number of players are being presented with a 'Error loading your profile' message when trying to log in. This is related to the game rollback. We're trying to fix this issue as soon as possible, but we're not able to offer an exact timeframe.

We're aware of an issue that's causing players in the Hallowed Sepulchre to teleport to the lobby upon floor completion. We're working to resolve this as quickly as we can.

This should now be resolved. If you come across any bugs please report them in-game using the "Report" button located in the bottom right of your chat box. Thank you for your patience.


In 'A Taste of Hope', you showed the vampyres that they bit off more than they could chew when they attacked the Myreque. Now, you and your revolutionary friends must take the fight to them, by infiltrating the vampyre city of Darkmeyer and facing Lord Lowernial Drakan on his own turf...

Are you prepared to walk the bloodstained path?

Sins of the Father is a new quest with the following requirements: 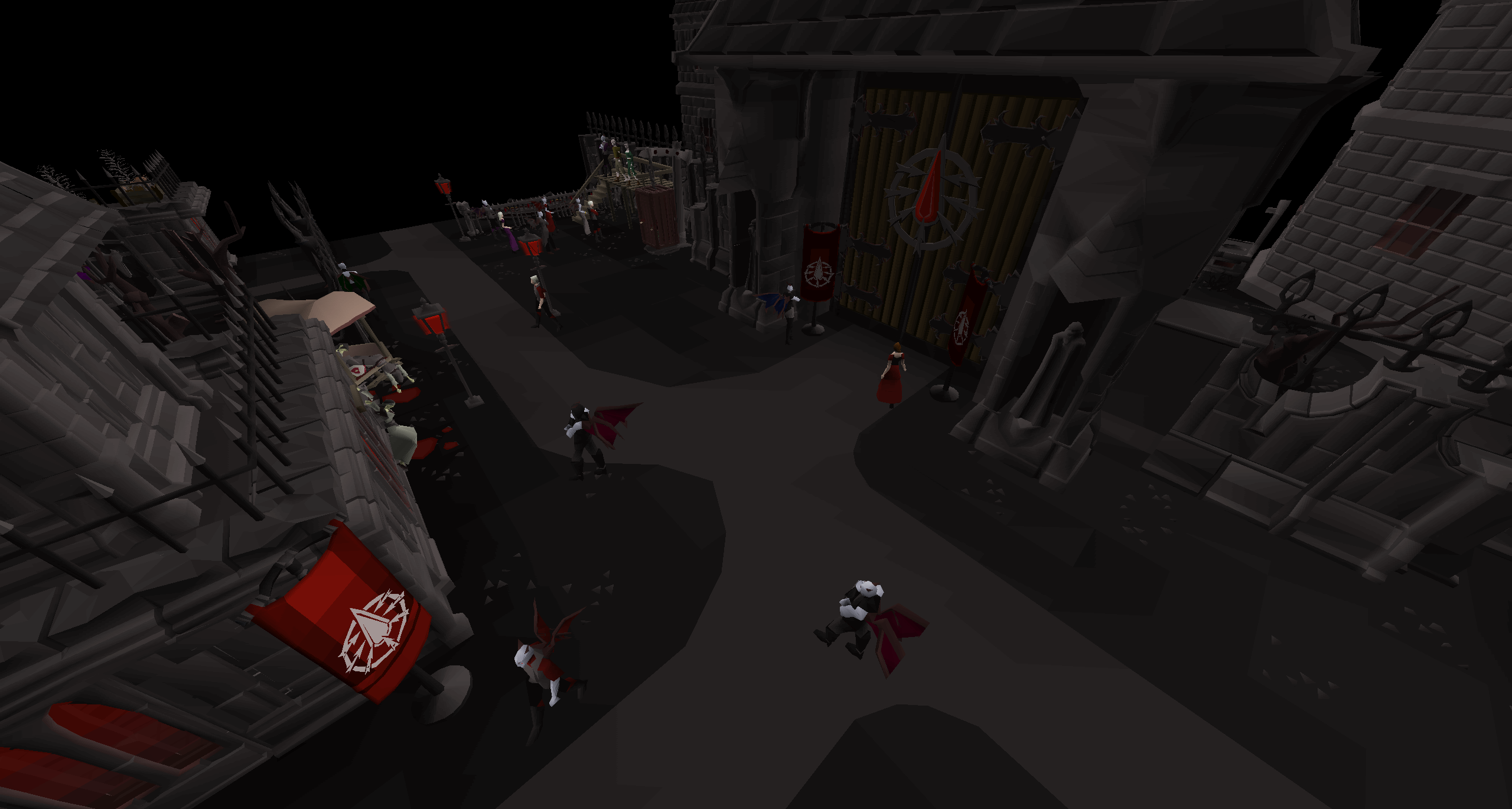 Like its ghoulish inhabitants, the vampyre stronghold of Darkmeyer is both beautiful and dangerous. Before you step through the gates, you should read our traveller’s guide to the region: 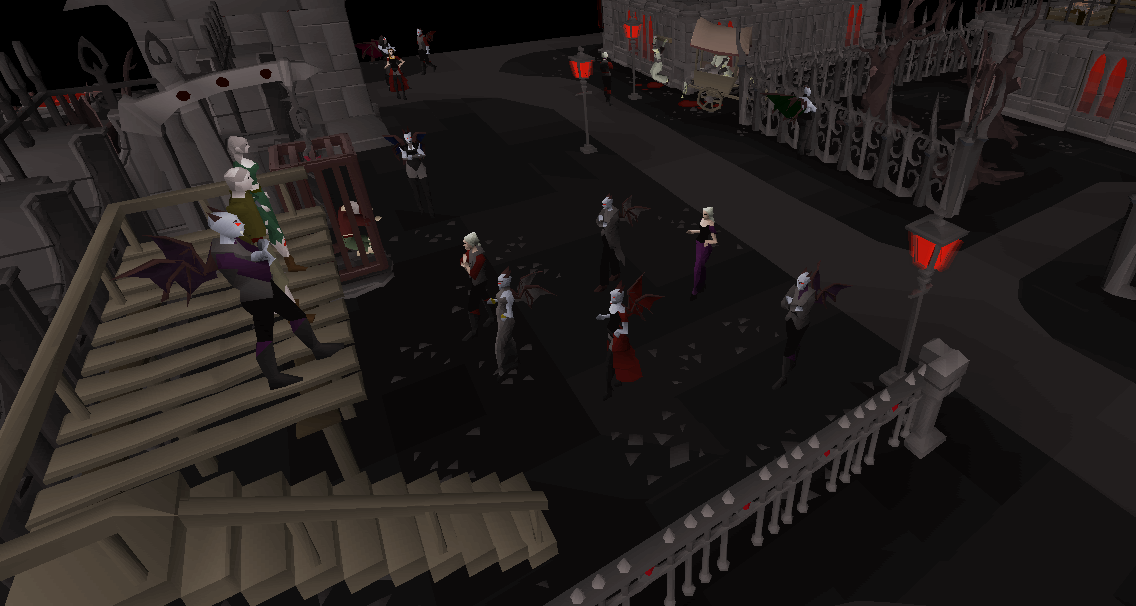 The vampyre aristocracy are laden with luxuries – luxuries which a deft thief might easily take for themselves. At 82 Thieving you can pickpocket vyrelords and vyreladies, whose unique loot table includes the Blood Shard, a rare attachment for the Amulet of Fury that will transform it into a Blood Fury Amulet. This remarkable little artefact will allow you to try and sap your opponent’s life force, with a 10% chance to heal you for 10% of the damage you deal. 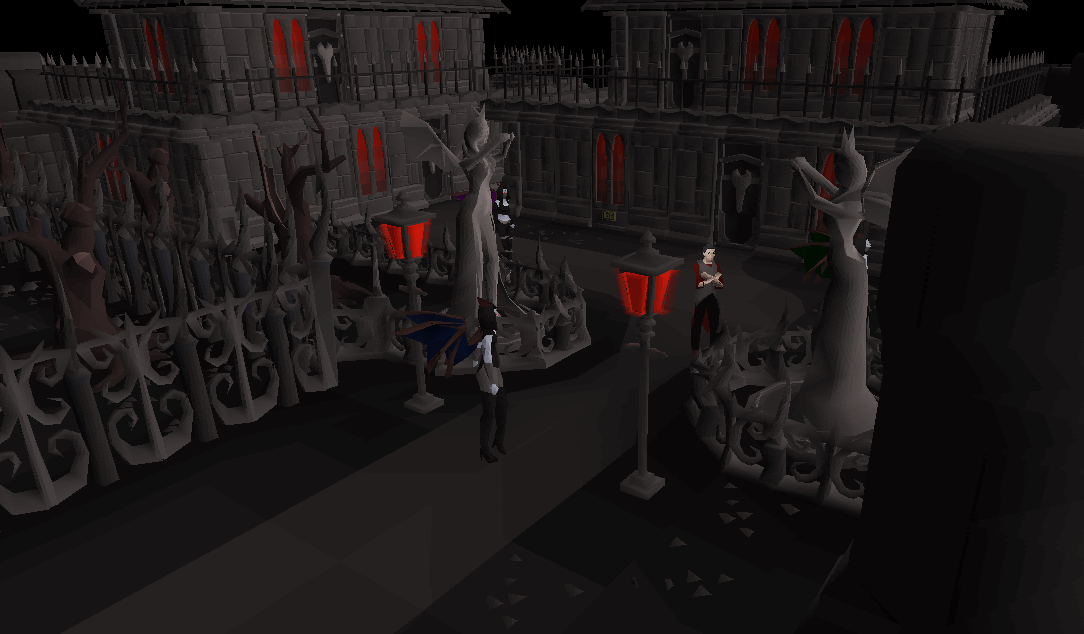 Members of Drakan’s disciplinary force, the Vyrewatch Sentinels, can always be found prowling the streets in search of unruly humans to snack on – but there are many rewards for an adventurer brave enough to face them down.

After Darkmeyer’s release, you can pay to have Konar, Duradel, Chaeldar and Nieve/Steve start assigning vampyres as Slayer Tasks – the Vyrewatch sentinels will count towards those. You can also use Slayer Points to purchase a vampyre task extension, if you're feeling particularly bloodthirsty.

The Vyrewatch Sentinels all have a rare chance to drop the Blood Shard. 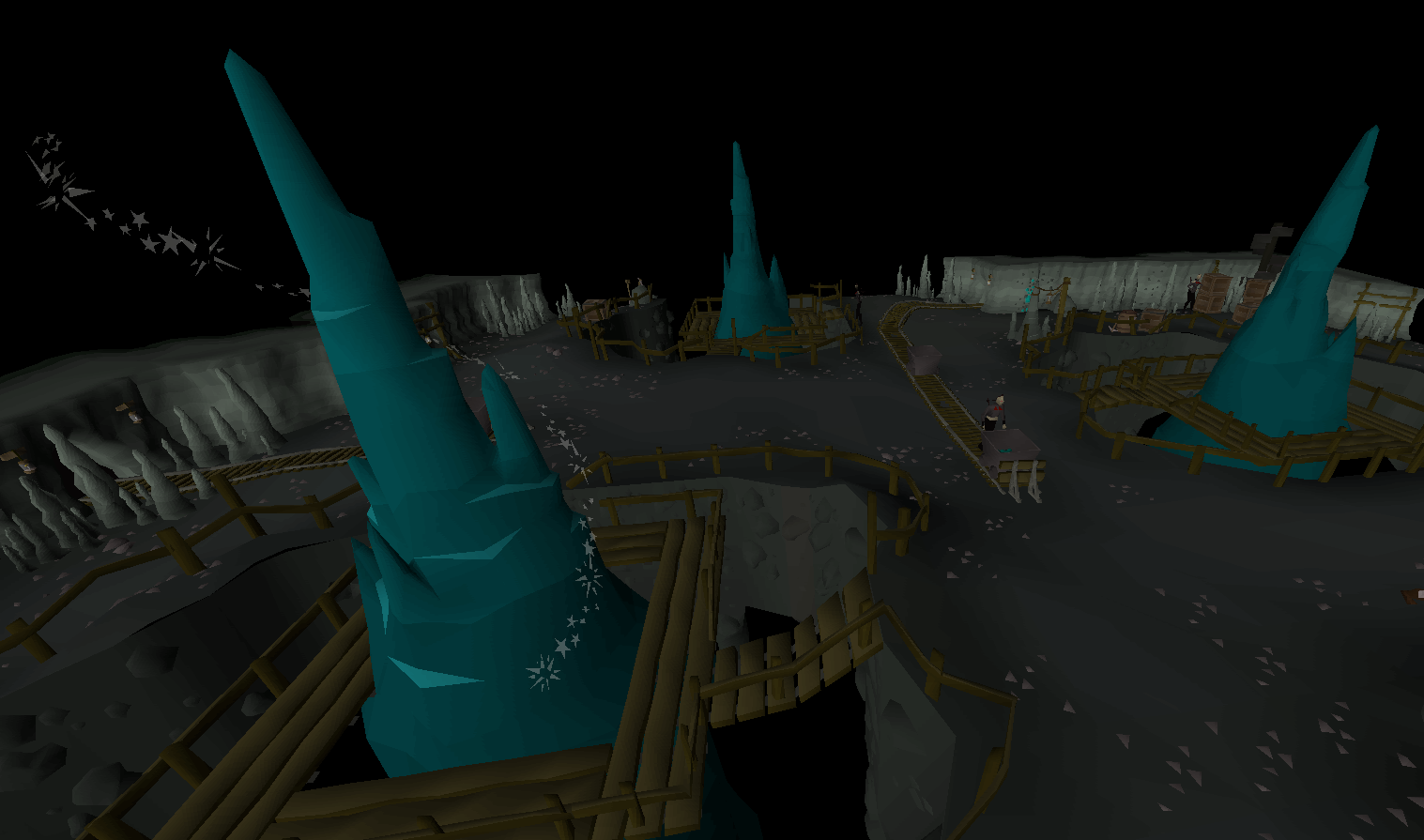 For many years, Darkmeyer was home to a mysterious power. Its presence caused the mineral deposits in the area to change, creating daeyalt and pure essence.

With 60 Mining, you can mine daeyalt for yourself. The mine’s mysterious power means that only one daeyalt deposit will be active at any one time – so you’ll have to keep on your toes. The untradeable daeyalt shards you get from this activity can be traded in to an NPC in the mine for untradeable daeyalt essence, which will get you 50% more Runecraft XP when used as a basis for runes. 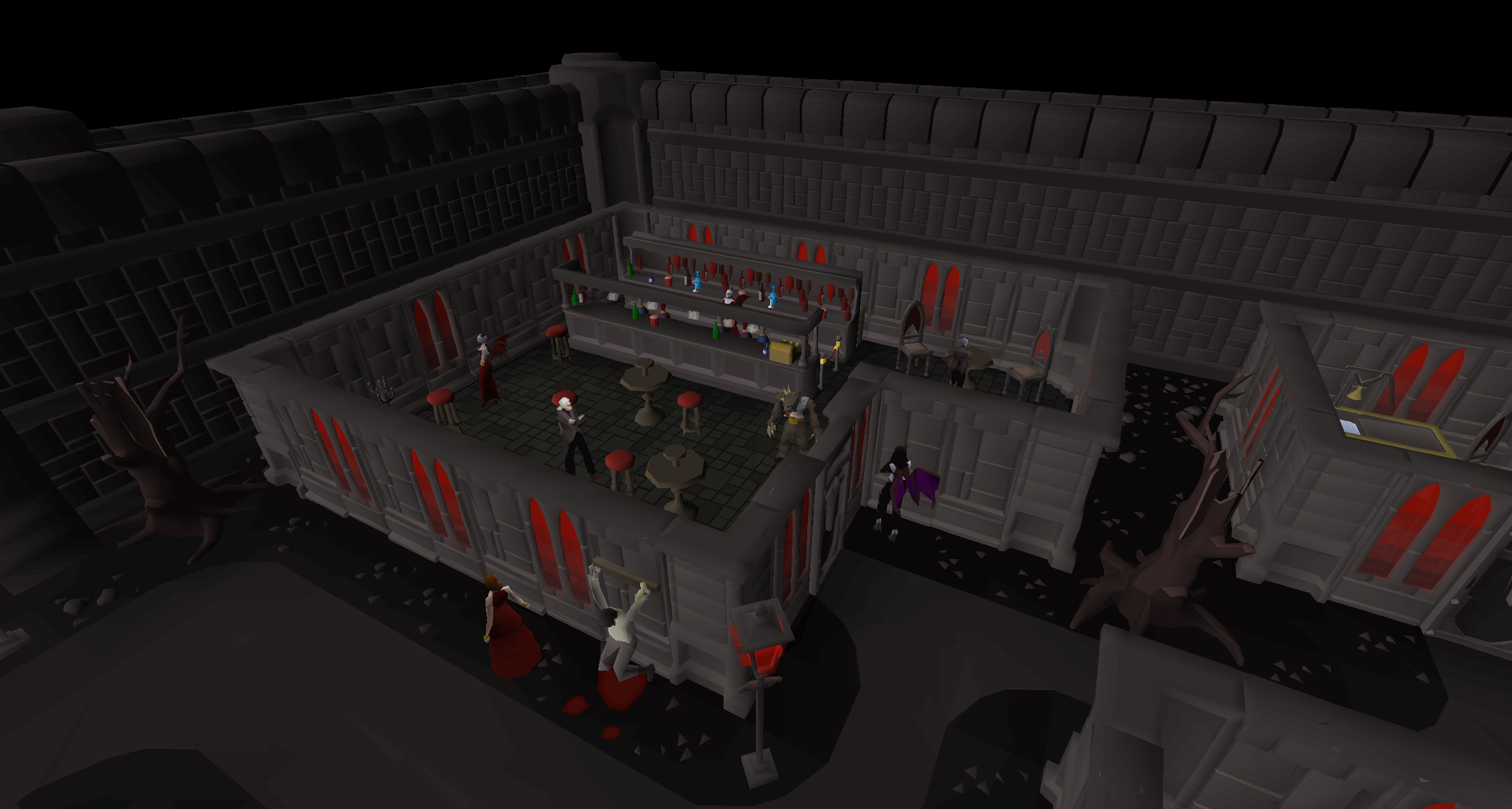 If Slaying and Mining seem a bit too lowbrow for your taste, you can indulge in a bit of retail therapy. The clothing store in Darkmeyer sports a range of vampyric fashions, so you can strut your stuff about town in style.

There’s also a general store, which stock the usual range of practical items, and a food shop, which sells the local delicacy known as ‘mystery meat’. Good luck with... whatever that is.

Need something to wash that down with? Then head on over to The Crypt, where you can get yourself a nice warm Bloody Pint.

And now that you’ve got a good meal in you, why not work out your Smithing muscles down at the forge? You’ll find a furnace and an anvil waiting for you. Chop chop! Those bars won’t smith themselves!

Of course, if you’re looking for a more intense activity, you could always visit... 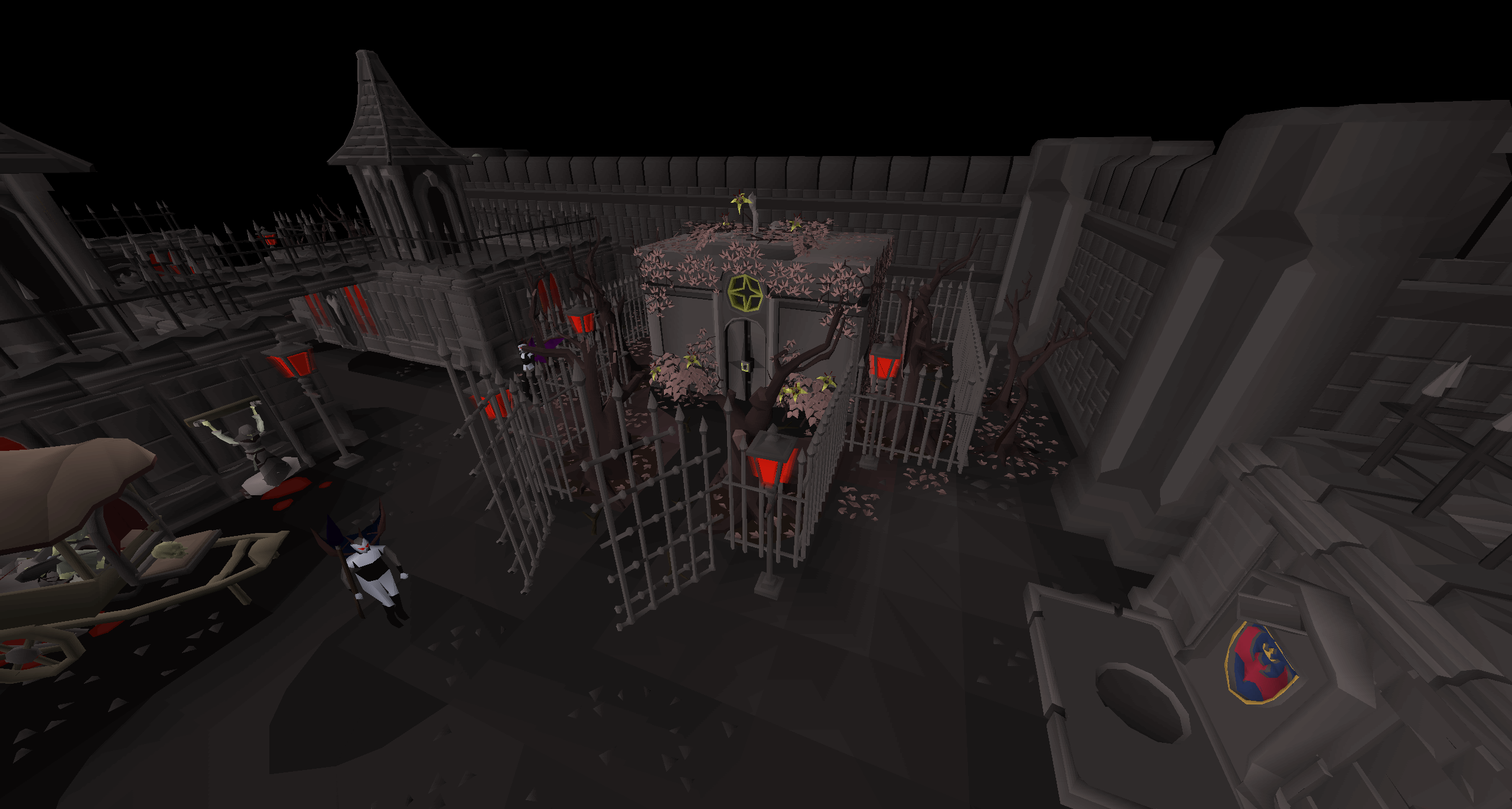 Entrance to the Hallowed Sepulchre.

Before the vampyres came to Morytania, the region was occupied by the icyene, an ancient race of winged beings who followed Saradomin. Their queen was the legendary Efaritay Hallow, and their capital city was known as Hallowvale. Now, the royals might have had their own sacred burial plot, but most citizens of Hallowvale were laid to rest in a great crypt known as the Hallowed Sepulchre – along with all their worldly goods, of course.

Plenty of adventurers have tried – and failed – to obtain those ancient treasures for themselves. The Sepulchre’s traps are not to be taken lightly. You’ll need all your skills, and a little bit of wit, to progress through the tomb and claim the treasure. Such bravery will be well rewarded. A mysterious group of unknown individuals will exchange a number of exciting goods for Hallowed Marks, the currency of the icyene.

Will you be the first to uncover the Hallowed Sepulchre’s mysteries? 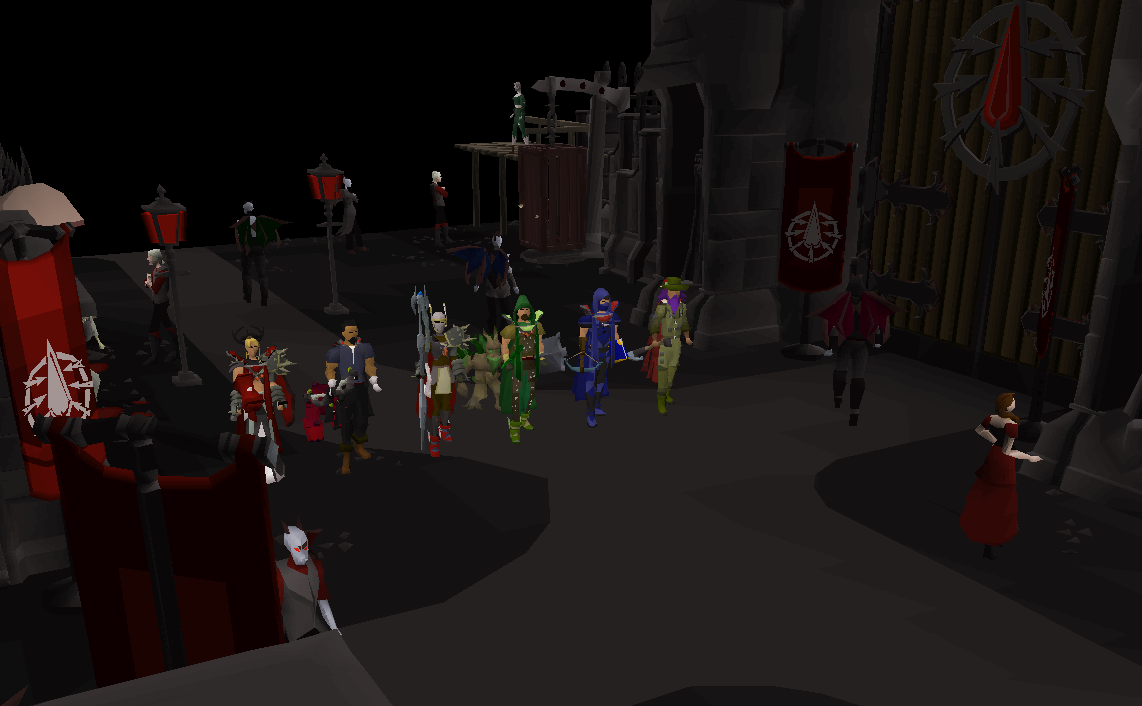 Darkmeyer is one of the biggest content releases of the year, and the J-Mods have been dying to talk about it with you.Now that it’s here at last, we can finally lift the curtain and see what they have to say!

But before you take a look, be aware that this section contains spoilers for the Myreque quest line. You’ve been warned!


We'd also like to give a special thanks to Mods Ian, Surma, and Slippers, who composed the music for everything in this update. To hear their musical stylings for yourselves, you can tune in to Spotify, where the Darkmeyer soundtrack has just launched.

To celebrate the release of Darkmeyer and Sins of the Father, we held not one, but two player competitions to show off Old School RuneScape’s dark side. So, without further ado... let’s see who won! 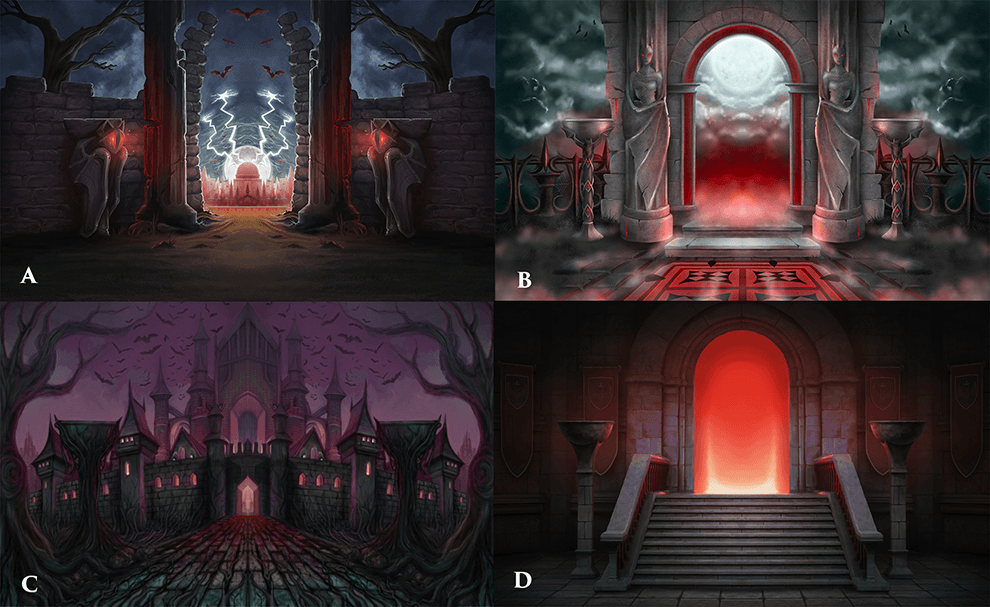 We asked you to design an extra-spooky variant on Old School RuneScape’s iconic login screen. We received loads of entries, and after a lot of deliberation, we chose just four finalists. Well, the votes have been counted, and we’re proud to announce that the winner is...

Nancyy! Congratulations! Your ghoulish log in screen (B in the image above) wowed the judges and your fellow players, and for that you’ll receive a Ł200 Amazon voucher and 12 months of membership.

In second place is image C, which was created by SOFKAVODKA. They’ll win a Ł100 Amazon voucher and 6 months of membership.

And in third place is DryDoctorEgg, with image A. They’ll win a Ł50 Amazon voucher and 3 months of membership.

Special shout-out to God of Onion, with image D, who placed fourth.

We’d like to thank everyone who submitted a login screen to the competition. There were some frighteningly good entries, and it was tough to choose just four for the final vote!

The Story So Far
We also called upon budding filmmakers everywhere to create a video summary of the Myreque storyline. We’ve seen entries that could give John Carpenter a run for their money, but in the end, we had to select just three winners. So here they are!

Congratulations to all of you!

Why not show off your new allegiance to the city of Darkmeyer with a new range of related merch, available now in the official store?

Flesh out your Angels Scapes collection with all-new items including the Mark of Grace, Graceful, and Dark Graceful pins and the Trimmed Agility Cape keyring – perfect for when you need to protect some treasures of your own!

Meanwhile, get in the spooky mood with the Darkmeyer Digital Soundtrack, available now on Spotify and all major music streaming platforms. It features 17 tracks from Darkmeyer and the surrounding environs, as painstakingly created in the labs of the Old School Audio team.