From new PvP opportunities with awesome rewards to a miniquest in search of Nomad lore and a repeatable hard-mode boss fight, this week’s update is truly action-packed.

Read on for info on a great new addition to your inventory, the currency pouch, as well as the chance to get your hands on Fae weapon sets.

The Crucible is now closed, so travel to Edgeville and enter the new Deathmatch Arena (it’s in the same place) for revitalised safe-death PvP. Deathmatch is the perfect way to learn the ropes of PvP in RuneScape while earning awesome rewards - new and old.

Battle opponents, earn points for your kills and assists and - most importantly - have fun!

Join a match via the Deathmatch sign-up board in the new Deathmatch Arena and pick which tier you wish to fight at. The queue will also divide people based on whether they play Evolution of Combat or Legacy mode.

The winner of a match is the first to PK their way to 50 kills, or to the player who has the most kills within the 10-minute time limit. In order to be credited with a kill you must have taken at least 60% of the lifepoints of a player who dies. You will be credited with an assist if you did a lesser but still considerable amount of damage to that killed player.

If you die, you will respawn in a safe part of the arena. When you re-enter, you will be temporarily immune to damage. The safe zones have bank facilities to restock, bandage tables to sew yourself together and an altar for you to recharge.

Check around the arena during a match for the glowing power ups and super power ups, including powerful temporary armour, cabbage time and the self-explanatory chicken army that will help you edge your opponents.

In particularly big matches of at least 20 players, the Supreme Hunter mechanic will come into effect, bringing an extra twist to Deathmatch. Look out for the notification that the Essence of Death has spawned in the arena.

When you enter the proximity of the Essence of Death, a new bar will appear above your head that fills up as you remain nearby. The first player to fill the bar will become the Supreme Hunter. As everyone’s bar is displayed, you should do your best to prevent the leader from becoming Supreme Hunter. Better still, if you kill someone who is standing near the Essence, you'll get half of their bar.

Becoming Supreme Hunter is a real honour and you will receive suitable weapons and appearance for the role. Your name will be broadcast in the arena. , and you will be powerful enough to fend off the waves of players who will doubtless try and take you out.

Based on your personal performance in matches, you will earn points that can be spent in the Reward Shop. Up for grabs include useful things like the ability to create ancient teletabs, a cosmetic Supreme Hunter helmet, as well as loads of useful goodies that will help out with the upcoming PvP content – Bounty Hunter. These range from tier 65 power armour sets to food rewards which can keep down those pesky PvP costs and give you a jump start when that content drops.

The old rewards from The Crucible will also still be available in this Reward Shop – so don’t fear if you wish to pick those up.

But for now, enjoy getting stuck in to Deathmatch!

Find out the story of the elusive Nomad in a brand-new miniquest. Solve clues and locate memories that piece together the history of one of your most famous nemeses.

Got to the River Noumenon Bridge in the Underworld. This area is now accessible post-Nomad’s Elegy. A brand new NPC in this area will leave the first clue.

Tales of Nomad is now required for the Master Quest Cape and Trimmed Completionist Cape and will reward you with 3 XP lamps on completion.

At the end of the reopened Noumenon Bridge area you can also now repeat the Nomad boss fight from Nomad’s Elegy – only harder and as many times as you want. This is now a requirement for the Trimmed Completionist Cape too.

Loot from this fight is reset on a weekly timer – reset tokens can be used here too.

There are 6 different coloured Soul Capes available for defeating him in the quickest times:

A currency pouch has been added to your inventory that will help you keep track of all the different currencies you acquire while saving space in your bank.

You can access the new currency interface by expanding the currency pouch button at the bottom of your backpack.

The currency pouch will hold:

Fairy-inspired fae weaponry is now in Solomon’s Store for you to pick up. Don’t take their namesake lightly though – these are as fierce as they are fae! 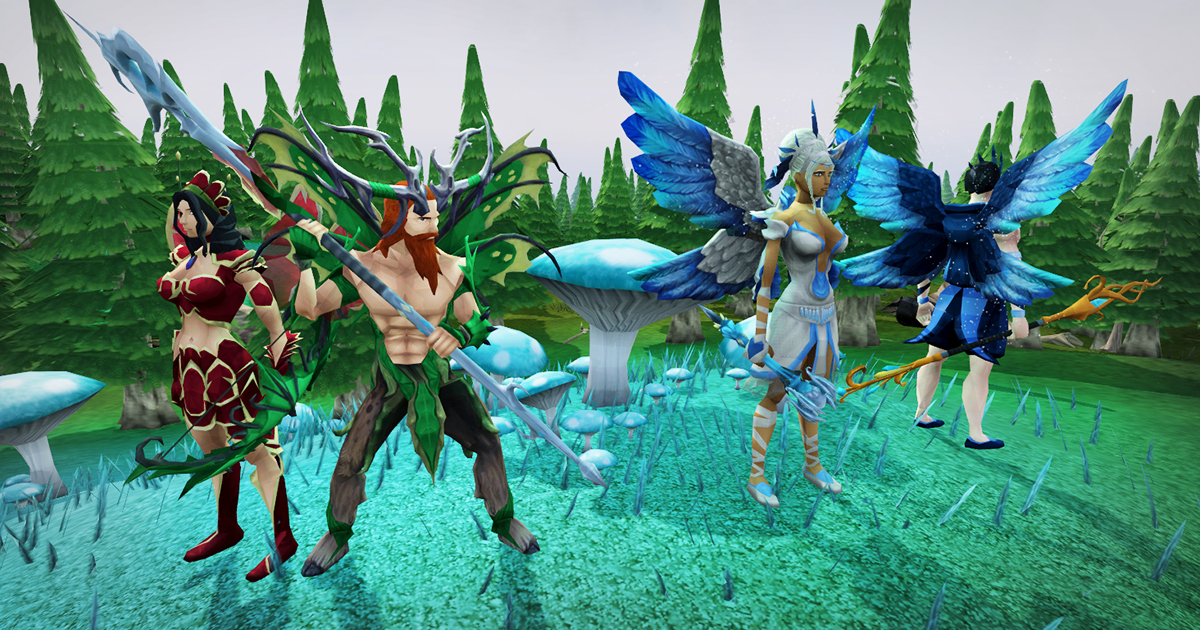 For all this week’s patch note, see the forum thread.

Watch streams and find a full streaming schedule over on the Twitch channel. Check the YouTube channel, too, for videos you may have missed.

This week, you’ll get a first look at the second batch of the Arc – read on to find out more!

The second batch of the Arc will be upon us in October. So we thought we'd give you a sneak-peek of what you can expect from the next set of islands you can discover in the region.

Find out what you can expect from Monday’s patches and more with Mod Shauny this Friday night.

Mod Lee will be hosting the usual Community PvM goodness live on Twitch.

Have a great week!