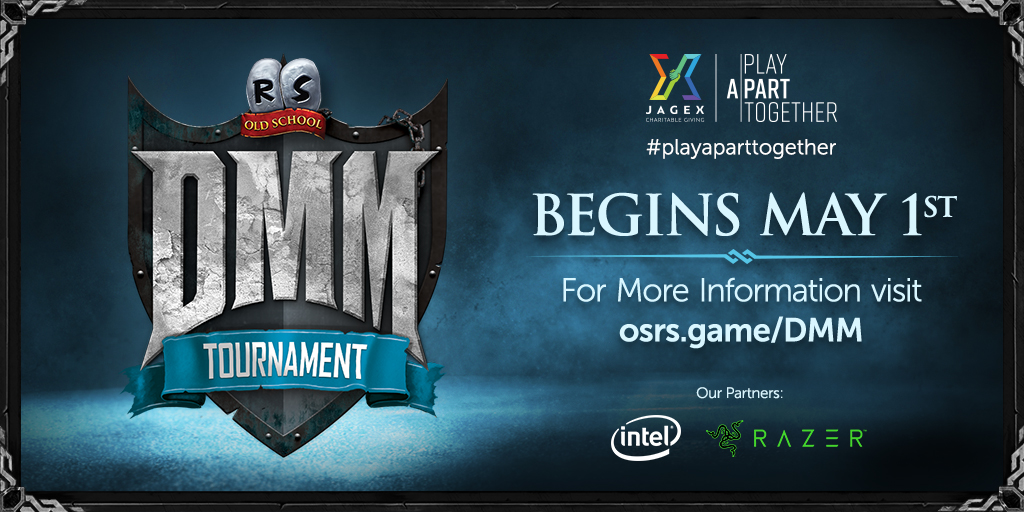 This all ties into our team-up with the #PlayApartTogether global games initiative to support physical distancing messaging in the fight against the spread of COVID-19.

WHAT IS THE DMM TOURNAMENT?

Vanquish your foes and fight for survival in Old School RuneScape's most perilous game variant. All DMM worlds are dangerous, there's unique content changes, and nobody is safe! Begin your DMM journey as a fresh noob and, with accelerated XP rates and more item drops, create a monstrous account for PKing!

WHEN IS IT AND HOW CAN I TAKE PART?

The DMM worlds are now open! Anybody with membership can log in and play on the DMM worlds! The Tournament will end on Saturday May 30th, following the beginning of the Permadeath stage which begins at 19:00 BST (14:00 ET / 11:00 PT).

Join us for our livestream of the Permadeath stage at the end of the DMM event on Twitch at 19:00 BST on Saturday May 30th!

WHAT ARE THE PRIZES?

In addition to the hefty Ł25,000 we're giving to our incredible mental health charity partners, there's also cash and amazing hardware prizes to be won!

We'd like to thank our friends at Intel and Razer for supporting the tournament by providing these prizes!

HOW DOES IT WORK?

DMM is extremely different to the Old School RuneScape that you know. Make sure to expand each section for a list of the some of the things you need to know!

WHAT ARE THE RULES?

That's it! We're incredibly excited to open up the DMM worlds and see the destruction that ensues!