The fourth and final front of the Elder God Wars Dungeon is upon us, and it’s a real firestarter. Welcome to The TzekHaar Front, where you’ll prove yourself a true champion of Gielinor by fighting wave after wave of Ful’s most fearsome minions – culminating in a battle against the toughest of them all, TzKal-Zuk.

TzKal-Zuk was once a human warrior who earned his chops in the Senntisten colosseum. After he gained his freedom he set off in search of even tougher fights – and eventually found himself slicing through the TokHaar’s Fight Kiln. He claimed the Kiln as his prize, and as the centuries have passed by this already formidable fighter has transformed into Ful’s champion, a hulking terror at the heart of Senntisten. Oh, and he’s brought friends.

Ful wants TzKal-Zuk and his TzekHaar army to seize the Elder God Eggs and end this once and for all, but there must still be a shred of humanity in him, because he’s given you the opportunity to go mano a mano and settle things the good old-fashioned way – with a no-holds-barred epic battle between Gielinor’s two greatest warriors.

Are you prepared? If not, don’t panic – we’ve got all the info you need to take on The TzekHaar Front, plus the inside scoop on a few of the rewards. Let’s get fired up! 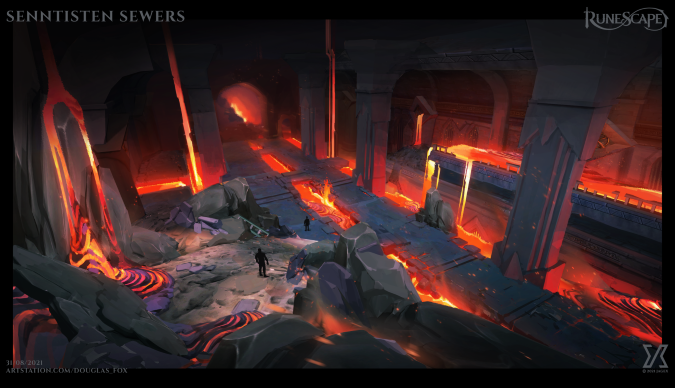 Before you can take on Ful’s ultimate champion, you’ll need to battle your way through waves of familiar beasties. Among them are upgraded, TzekHaar versions of TzTok-Jad and Har-aken, who’ll you know from your previous exploits in the Fight Caves and the Fight Kilns.

After you’ve fought your way through the minion waves, you’ll finally get to take on Zuk himself. 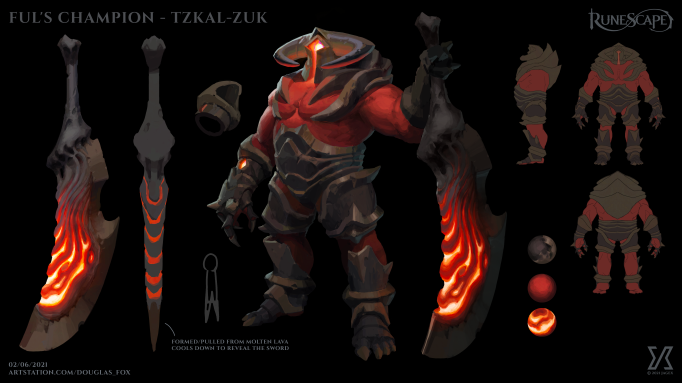 You don’t have to take on The TzekHaar Front in one go. There are set checkpoints throughout the encounter that will let you continue from where you left off should you meet a sudden, fiery end.

However, if you're able to reach the end without checkpoints, you'll get better loot after the battle, including the valuable Igneous Stone, which you'll need for the new capes.

There’s another reason you might want to avoid using those checkpoints – unlocking Hard Mode.

By default, you’ll play through The TzekHaar Front on Normal Mode. Should you complete that flawlessly – without using checkpoints and completing all of Zuk’s challenges – you’ll unlock Hard Mode, a more difficult version of the Front with some unique loot.

Now, should you flawlessly defeat Hard Mode as well, you’ll get the greatest reward of all – the ability to combine your three Igneous Capes (yes, obviously there’s capes) into one, totally epic variant.

Onto the best bit – the rewards!

Unlike the Fight Caves and the Fight Kiln, all the minions on The TzekHaar Front will drop loot, Elite Dungeon-style, into a chest that you’ll be able to access when the fight is over.

Alongside the usual loot table, there are some exclusive rewards available: 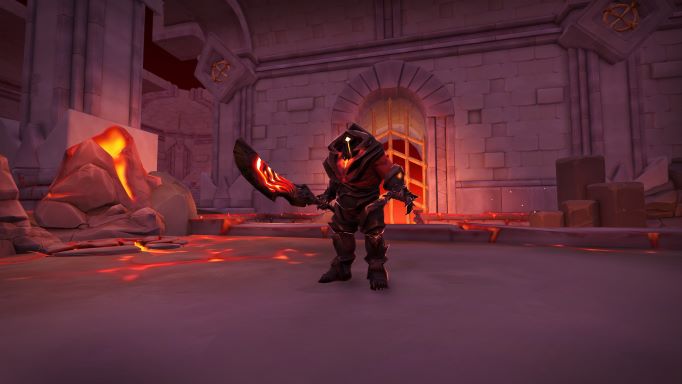 Ain’t he adorable? Now you can take home your very own immortal warrior, who we presume was left in the Kiln a little bit too long. Complete 200 Hard Mode kills, and you’ll get a fancy new skin for him, too.

The mages among you will appreciate this all-new two-handed magic basic ability. Point and click a tile – or an unfortunate NPC – to create a 5x5 damage-dealing area on that location. The AoE will last for 9.6 seconds and hit 8 times for 5-25% damage… each. Oof, what a burn!

Like the other Elder God Books, activating a fully compiled Scripture of Ful will get you a fiery buff. In this case, you’ll do 20% more damage and take 10% more damage for 15 seconds after activating the Scripture. Hey, you play with fire, you’re bound to get burned.

You’ll be able to charge your Scripture with Manuscripts of Ful, which are also dropped on The TzekHaar Front.

This powerful stone is only given to the bravest of warriors. To earn one for yourself, you’ll need to prove yourself by defeating Zuk without using a single checkpoint.

You can use the Igneous Stone to upgrade your existing Kiln Cape to the new, supremely powerful Igneous variants. Let’s take a look at those, next. 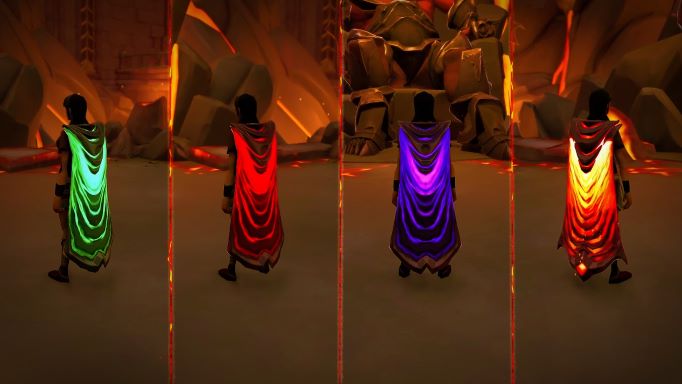 This time, you can pick up a total of three different capes, each of which is best-in-slot for their particular combat style. Hey, it’s a tough challenge, and it deserves epic rewards!

The Igneous Kal-Ket is the cape of choice for melee masters, and gives +57 armour, +43 Strength bonus, and +2 Prayer bonus. It also boosts Overpower, so that it costs 60% of the usual adrenaline and hits twice.

The Igneous Kal-Xil, on the other hand, is best suited to Ranged combat. It boasts +57 armour, +43 Ranged bonus, and +2 Prayer bonus and empowers Deadshot, reducing its adrenaline cost to 60% and causing it to deal 42-210% of initial damage plus 70% ability damage every 1.2 seconds over the next 8.4 seconds. Basically, it absolutely destroys things.

Lastly, the Igneous Kal-Mej is the mage’s best friend. It gives +57 armour, +43 Magic bonus, and +2 Prayer bonus. It also buffs Omnipower, reducing its cost to 60% and causing it to hit four times, with each hit dealing 80-180% of ability damage. Kaboom! 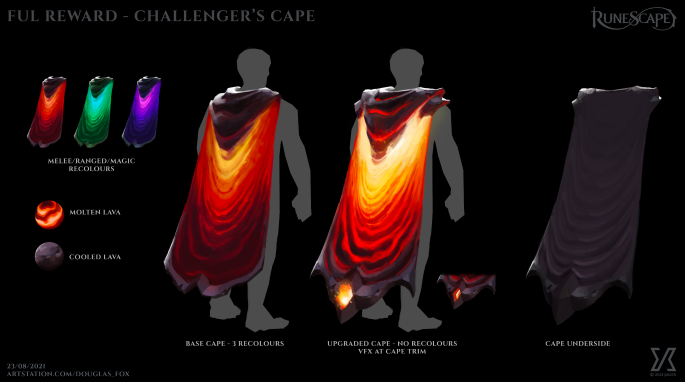 If you have the skill to complete a flawless Hard Mode run, you’ll be able to combine all three of the above capes into one unbeatable hybrid. It boasts +57 armour, +43 Magic, Strength, and Ranged bonus, and +2 Prayer bonus. Oh, and obviously it bestows the same buffs and boosts as the other three capes – without the hassle of re-equipping them every time you switch combat styles.

That’s a pretty nice sword Zuk’s got there, isn’t it? Would be an awful shame if some adventurer or other was able to repeatedly beat Hard Mode, pick up all three parts of it, and make their own… wouldn’t it?

The three parts you’ll need are the Obsidian Blade, the Magma Core, and the Ancient Hilt, all of which can be obtained after defeating TzKal-Zuk in Hard Mode.

The sword itself is a tier 95 two-handed melee weapon which requires 95 Strength to wield. It also comes with its own signature special attack, the Igneous Cleave. It deals 62-190% initial ability damage, plus 6 hits of 30-105% ability damage (increasing by 5% for each hit) over the next 14.4 seconds. Yowch! 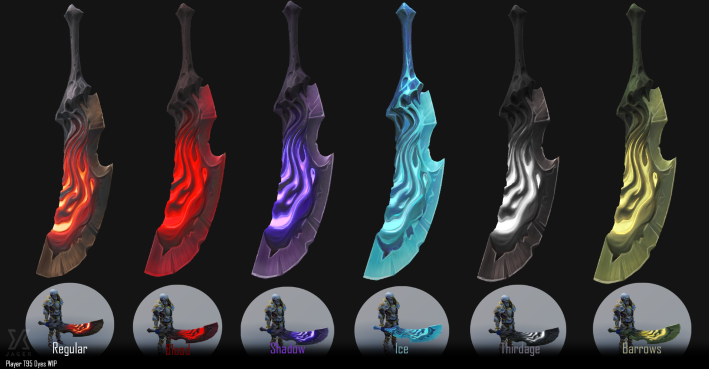 Just to add injury to insult, should your target be hit by a burn or bleed ability while Igneous Cleave is going, that effect will be extended by an extra hit, up to a maximum of five hits.

Oh, and just so you’re aware – Ek-ZekKil counts as an obsidian weapon for the purposes of the Berserker Necklace.

This final front will also let you pick up the final upgrade for the Pontifex Ring. Once fully upgraded, you’ll be able to overpower it, getting you access to all the buffs it provides without having it equipped.

If you have the top tier Pontifex Ring, you’ll start to find Quiver Fragments in tier 3 Elder Troves. With 100 Fragments, you’ll be able to create the legendary Pernix’s Quiver, a Ranged accessory which goes in the quiver/ammo slot and comes with a slew of useful Ranged buffs.

Firstly, the Quiver grants access to two ammo slots, and automatically swaps your ammo to suit the type of Ranged weapon you’re using.

It also gives your ranged attacks +4% max damage when fighting targets below 25% health.

As a note, Pernix’s Quiver is tradable when first crafted, but untradeable once bound to you. 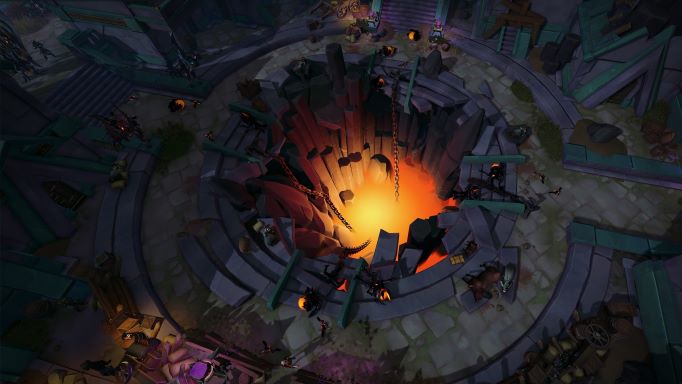 So, there you have it: your comprehensive guide to The TzekHaar Front, which will go live on October 25th.