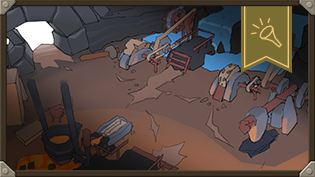 After months of secrecy, it’s finally time to give you the full details of the Giants’ Foundry – an all-new Smithing skilling method built by the giants of Gielinor and operated by YOU!


To access the Giants' Foundry, you’ll need to play through a short quest. Let’s take a look!

Will you be on top (pre)form in the Giants' Foundry?


The saying goes ‘Let sleeping giants lie’, but in this quest, you’ll do exactly the opposite!


Giants have existed in Old School RuneScape for years, but how much do we really know about them? Sleeping Giants is a new novice quest designed to reveal more about this mysterious race.


In it, you’ll help Kovac, a giant who’s discovered an ancient workshop built to his proportions! Delve into the giants’ murky past, rebuild their Foundry, and start smithing swords for giants all across Gielinor!

Should Sleeping Giants, a new quest in support of Giants' Foundry, be added to the game as described in the blog?

A look inside the Giants' Foundry.


After completing Sleeping Giants you’ll have all the know-how you need to start Smithing in the Giants’ Foundry.


This is a non-instanced and non-combat safe area accessible to all Old School RuneScape members.


The Foundry began with a simple question – how can we make Smithing more interesting and engaging? We wanted a process that was more exciting than just taking a bar to an anvil and hammering away for a couple of seconds. Thus, the Giants’ Foundry requires you to use all your skill and perseverance to forge swords of giant proportions!


Working on a commission given by Kovac, you’ll have to find the perfect sword design, choose the metal according to your chosen difficulty, and work the preform with a variety of tools to get the perfect killing edge.


But be careful - each resource used within the Foundry has the potential to offer more value per bar but if you're not paying close attention, you could lose both the resource and experience!


If you'd like to see a more visual representation of Giants' Foundry gameplay, check out this segment from last week's Q&A with Mod Oasis:


Please note that Giants' Foundry is still in active development.


Before you can start working on a sword, you’ll need to pick up a commission from Kovac, set the mould, fill the crucible, and pour the liquid metal you’ve chosen.


Commissions define what kind of blade you’ll be making using two descriptive words. For example, you might receive a commission from a giant who wants a sword that’s ‘narrow’ and ‘spiked’.


You’ll need to keep that description in mind when you choose a mould. Look through Kovac’s Mould Library for the best match. The closer the match you find, the higher quality your sword will be when you start forging – so choose wisely!


Note that the points you gain here won’t affect how difficult it is to make the sword – that’s all determined by the type of metal you choose. 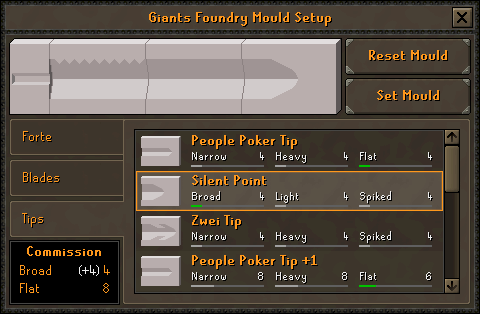 A look at the Mould Library interface.


Speaking of which, once you’ve selected and set your mould you’ll need to move on to the crucible – the big stone bucket chained above the river of lava. The crucible heats and liquefies the metal you put into it. It’ll accept Bronze, Iron, Steel, Mithril, Adamant or Rune Bars, or any metal item you want to recycle. You heard that right! Finally, a way to get rid of those unwanted Platebodies and Battleaxes!


Note that when recycling items, you won’t get back all the Bars it took to craft them – some material is always lost in the creation process!


A Giant’s Sword required 28 Bars worth of material, which is conveniently the exact same amount the crucible can hold. It’s like we did it on purpose!


Once you’ve filled the crucible you can pour the molten metal into your mould. The higher the tier of metal you’ve chosen, the longer the sword will take to shape, and the more precise the temperature range will have to be.


Kovac also believes that swords made of an alloy – a mixture of two or more different metals – will be better. That’s something to keep in mind!


Now, it’s time to cool off as we begin to work the blade!


The refinement process lets you shape the raw preform you just created into a blade fit for a mighty giant!


You’ll have a variety of tools at your disposal:

Use the right tool at the right time, and you’ll increase the sword’s completion to 100%. You can track which tool to use at which heat range using the in-game HUD.

An example of the Refinement HUD.


Using tools changes the temperature of the preform, which will also naturally cool down over time. Using the incorrect tool, or using the right tool outside the correct temperature range, will result in a lower-quality sword. If the quality of the sword reaches 0, you’ll have to hand it over to Kovac and try again. Be warned that quality can only ever be lost – you can’t get it back again!


If you manage to reach 100% completion without ruining the sword, you can hand it in to Kovac, who’ll reward you with some juicy XP and some Foundry Reputation. The higher the quality, the more rewards you’ll get!


Here’s an example of the refinement process:


So, what does the experience rate look like? Where does it fit into the existing Smithing metas?


Here’s where we think Giants’ Foundry sits in comparison to other skilling methods:

After testing, we reckon that players can make between 10 and 20 swords per hour with each sword taking 28 bars to create.


Easier metals such as Bronze and Iron obviously require less effort, so players will be able to make the higher end, whereas swords made with Adamantite or Runite will take longer but offer a greater reward.


These values are subject to change before and after release.


We’ve also crunched the numbers for other skilling methods:


Please note that these are rough estimations.


So at the very top end, you'll be earning approximately 276,000 per hour at the very highest tier (roughly 12 swords with optimal setup and moulds for the equivalent level). Please note that these current experience ranges are subject to change.


Other skilling methods offer little in terms of a gameplay experience so although this won't be the most optimal method for Smithing, we feel the activity itself presents a better Smithing experience overall for the player - particularly for training the skill earlier (levels 30-70).


Also, as you can see, current methods are resource intensive. A benefit of Giants’ Foundry is that you’ll use fewer materials per hour, giving you more XP per bar. With everything, we believe this is going to be the most fulfilling Smithing experience yet.


Apart from the massive XP gains, completing commissions will also gain you some GP depending on the quality of the blade and the metals used in its creation, along with some Foundry Reputation, which you can use to purchase goodies from Kovac’s Reward Shop. Here’s what he’s got in stock!


This kit sees you don some ancient Dwarven-wear that Kovac has acquired... somehow (that's all a bit mysterious!) and can be purchased from the Reward Shop. It consists of Gloves, Boots, a Top and Bottoms, and offers two benefits! 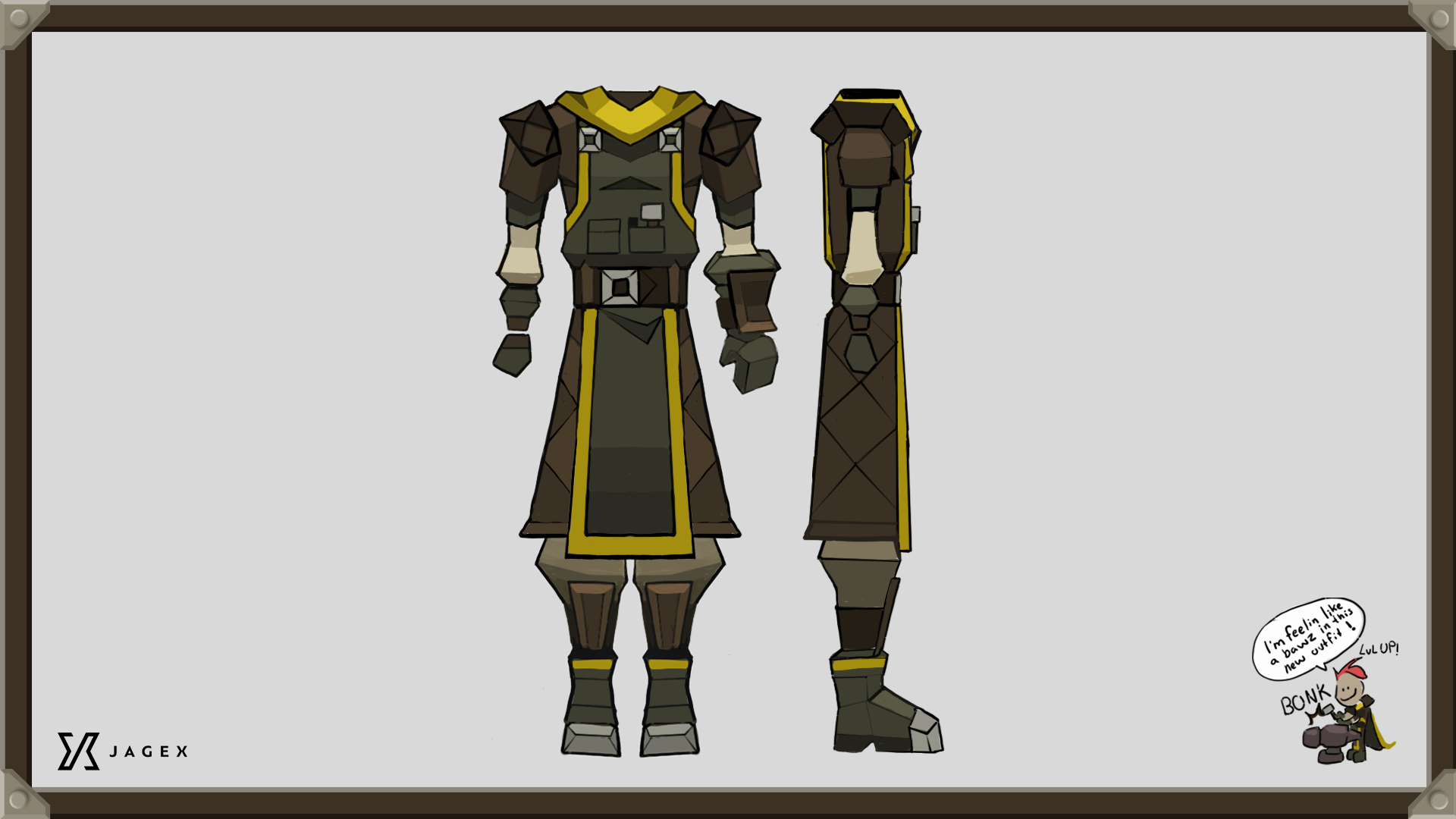 Concept art for the Smiths' Outfit.


Ore Packs are a great way to purchase lots of coal in one go, making it easier to prepare for your next trip to the Giants’ Foundry. You will have a small chance to obtain other ores from these packs too, but the focus is mainly coal.


We thought it would be interesting if you could buy tools to help you improve your sword-smithing process within the Foundry.


These extra moulds will help with all kinds of commissions and give you a leg up on quality before you even start Smithing. The better the mould, the higher the Smithing level you’ll need to train and gain all in one location.


With Leagues III you got an eight-sided cannon, so it’s only fitting that you now get an Eight-Cannonball Mould! This mould lets you use two Steel Bars to smith eight Cannonballs at once, doubling your production speed!


Using this unstackable item when creating Bars at a furnace will not only halve the amount of Coal required but will also double the XP given! However, the Catalyst will be consumed when the Bar is made, so you’ll need plenty of them to go around!


Catalysts can also be used at the Blast Furnace and also give double the XP for any bar produced while using this item that requires coal (essentially all of the bars you'll be using within the Giants' Foundry). However, it won't cut the coal cost down any further than it already does. As an additional extra, we are going to allow you to deposit Catalysts at the Blast Furnace Bank so you can use lots of them in one run.


A brew made by Kovac himself! This (supposedly) tasty Grog will give you a temporary Smithing boost of +4. Just don’t tell health and safety…


We want to offer you a bit more than just a cosmetic upgrade. This standalone weapon, that you'll need 60 Attack to wield, gives you a mighty sword similar to the one you gave Kovac. 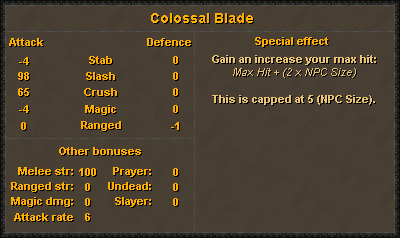 Stats for the Colossal Blade.


Alongside this, we're giving it a special effect that fits the theme of the Blade. Depending on the size of the enemy you're fighting, it will now increase your Max Hit according to the size of the NPC:


The NPC Size will be capped at 5 (NPCs that take up a 5x5 area and above), meaning that you'll be dealing the most damage against bigger enemies. We feel like this weapon now fits a good niche comparatively to the Dragon Scimmy and could prove more useful in certain situations, whilst looking great to boot. Remember, the bigger they are, the harder they fall!

A look at the Colossal Blade.

Should we introduce the Colossal Blade as described in the Giants' Foundry blog, obtainable via the Giants' Foundry Rewards shop? This weapon would require 60 Attack and have a special effect that would increase its Max Hit depending on the size of the NPC you are fighting.