This week we’re answering your burning questions about Group Ironman – find out what we’re planning below! Plus, we’ve made a few extra changes to the rest of the game, including new music tracks, login improvements and more. Let’s dive in.


We’ve been seeing a few of your excellent questions crop up multiple times, so here’s a quick FAQ:

The following activities will remove Group Prestige if tackled them with players outside your group:


We are still considering whether Nex is part of this list - you'll know once we’ve decided!


Can I rename my group?

Yes, you can! Leaders can rename their group by visiting the Group Iron Tutor at The Node.


I have a group of three, but another friend wants to join later. Can I add my friend at a later date?

Yes, you can add your friend into the group later. Groups can have a maximum of five members in total; if you decide to welcome a new member, you will lose Group Prestige - but there won’t be any gameplay consequences. All that will happen is that you’ll lose the gold star next to your group's name.

All original members will keep their individual Prestige, which means they are free of any wealth or item restrictions. However, to prevent boosting the new member WILL have those wealth and item restrictions. Check out the Group Ironman Blog for more details on this.


We've already put out a number of hotfixes to address some of the launch bugs. Fixes for the following bugs are live:


We know that some of you are still in the wrong HiScores bracket. You might be a four-player group but showing up in the five-player HiScores, or similar. This is unintended and of course we don't want you stuck competing in an incorrect category!


We believe we have fixed the underlying cause of this issue so that it is not affecting new groups, but we will be resolving it for those still struggling by using some handy tools from our lovely web team (as this problem is related to our website, we can’t resolve it on the client). Once the web tool is ready (hopefully in a matter of weeks), we will be working hastily to correct each group. We'd like to thank you for your patience as we fix this.


Now, on to the most important bit: your feedback! We've received heaps of helpful insights, and while our immediate priorities will be on fixing any errors, we are keen to improve on the features that you enjoy! Here's what we're looking at right now:

Group Storage Space and Save Function


As you are probably aware, we temporarily disabled access to the Group Shared Storage over the weekend to investigate an issue. This feature has now been restored and we thank you for your patience.


There has also been a lot of demand to increase the amount of space for Group Storage as the current space feels insufficient.


Our answer? Absolutely! We would like to increase the storage capacity for you, but we haven't yet decided how this will take shape. What do you think is the best approach? For example, should increasing Storage be something that players can earn and unlock on their account? If so, what does that progression system look like? Or should it be something locked behind Achievement Diaries, or something else? Perhaps it should it just be a flat-out payment in Gold?


We're going to experiment with designs in the coming weeks and we'll update you when we have some proposals to share. In the meantime, please send us your ideas!


We also know that some players find the Save function for the Group Storage rather clunky to use. This is because it’s different from the usual Banking process - Group Storage isn't part of your own saved game profile, so it must be saved to the appropriate server before another group member is able access it.


However, we think we can make some improvements here. We intend to change the ‘cross' icon so that it will have a Save and Leave function, meaning that the hotkey you use to close interfaces (usually ESC) also doubles as a save hotkey when you close the Bank.


Many of you have also asked us to make a private chat channel specifically for your group, and we're working on adding this in the coming weeks. It will work similarly to Clan Chat, but only for you and your group. We'd love to know what shortcuts you think would be useful for this new channel?


We're also going to implement the broadcast system that we currently use for Clans. This will mean that you can opt-in to receiving notifications when a member of the group receives significant loot or achieves a major milestone. Finally, you'll have the equivalent of the Clan Interface for your group or other groups, with lots of important info. This feature will also allow you to report any inappropriate group names that you may come across.


We're aware there’s huge demand for a shared Player Owned House for groups, or failing that, a customisable instance which can be shared, upgraded, and only accessible to the group. We'd like to explore the possibility of a Shared Group Hall, and we're investigating how we can achieve this alongside our other projects. Please keep in mind that this is no small task, and if we were to focus on this project, most of our development time would be spent on this area.


Nothing can fully replace the functionality, utility and enjoyment of sharing a customisable instance with your group. In the short term, we are considering whether we can allow players to visit Player Owned Housing without the owner needing to be at home. We hope to have a response to this popular community suggestion once we have fully scoped out the work involved.


We're also delighted to share another Killerfishy Comic with you today! If you have not seen the first one, check it out here! This fun little project is guided by you, our players. Last week, you told us that you wanted our Heroes to focus on Questing, so this week we bring you: Dragon Slayer! 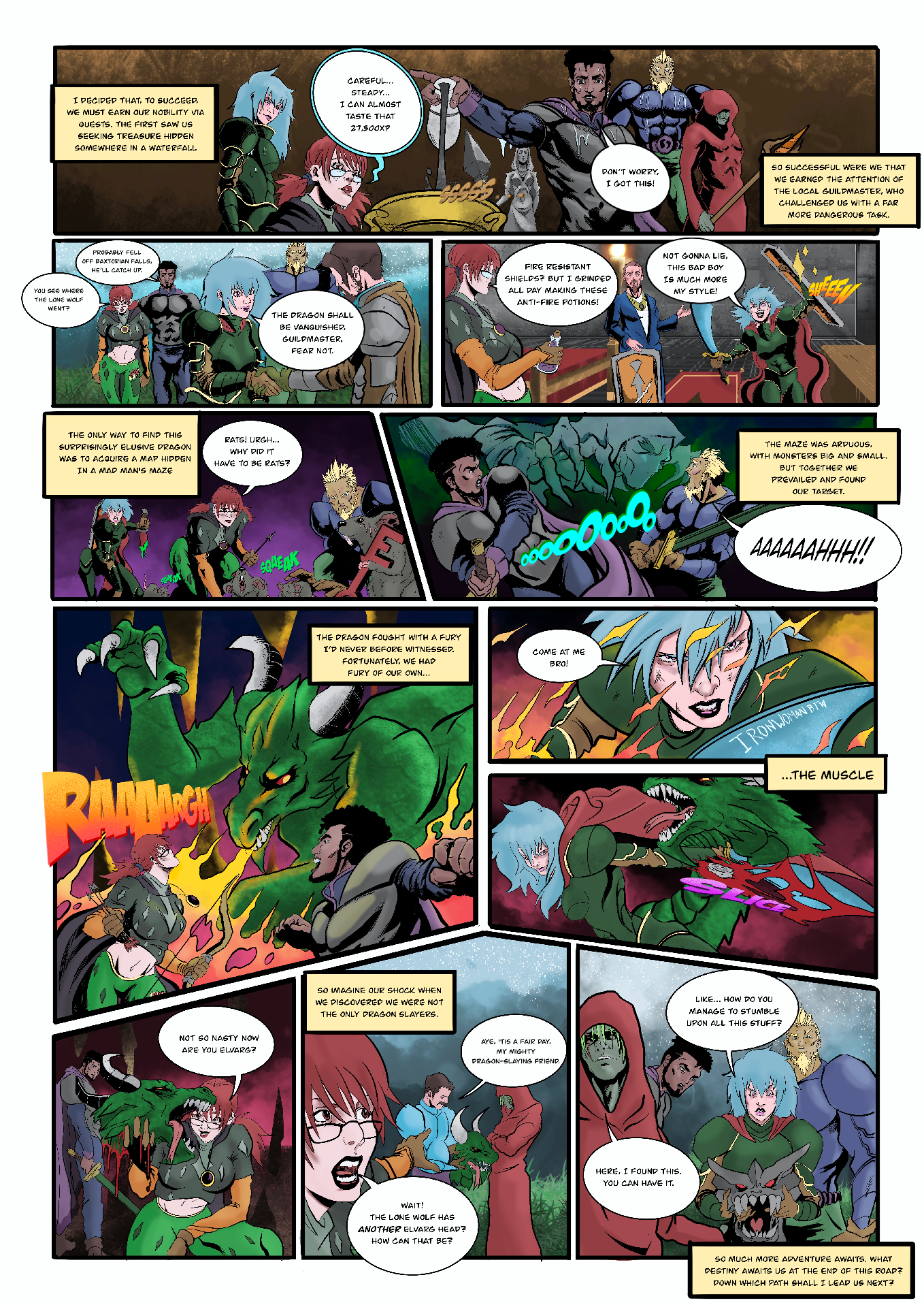 This Comic was made by Killerfishy. For the full resolution image, please click here.


We'd like you to vote on where you think they should head to next! Head over to any of our social platforms to decide whether our adventurers should go...


And feel free to tell us your ideas about what they could get up to when they get there!