The Group Ironman poll is now closed and given that it is the most-voted-on poll in Old School's history, as well as how spirited a lot of the sentiment and discussion around the poll (and the poll system itself) has been, we felt that it'd be beneficial to offer a transparent summary of the poll outcome. If you like this type of information-sharing we'd be happy to do something similar for other polls in the future. We'd also like to thank the 141,510 players who took the time vote in this poll.


Before we look into the voting itself we wanted to answer a few questions related to the poll.


Why even poll this game mode?

It's content that directly interacts with the main game, rather than something outside of it like Deadman or Leagues (though we do poll Leagues rewards!). Ironman (along with Ultimate Ironman) and Hardcore Ironman were both polled in the past (passing with 76.3% and 85.7% respectively) so there was a clear precedent to follow.


Why does the poll question include the phrase 'as described in the blog'?

This is included for two reasons, first to guide players to the blog to ensure that they know exactly what they're voting for since we can't include all details of the design in the question, and also to make it clear that we wouldn't deviate from the design after it has been polled. This is generally a standard in all poll questions, check out polls from this year for Below Ice Mountain and Shooting Stars to see. This does not mean that we would have ignored the poll result and added it in anyway with slight differences.


Why did you poll it so close to the proposed release date and so far into development?

This isn't something we'll be repeating again. The truth is that a lot of the under-the-hood work began a long time ago to allow us to do things like Clans. The last elements of the content design were finalised recently, and so the blog and poll came later than we would have liked. In hindsight we could well have polled Group Ironman as a general concept, stating that we'd be polling things like storage, grouping, and Prestige at a later date.


Were you going to add Group Ironman if it didn't pass the poll?

No, we would have respected the poll result. As with many other polls which fail we would have reviewed the result, the feedback, and would have considered revising the design with potential to re-poll.


Now, let's get into the poll itself!

A graph showing the cumulative vote percentage over the course of the poll.

A graph showing the cumulative numbers of votes over the course of the poll.

A graph showing the number of hourly votes over the course of the poll. 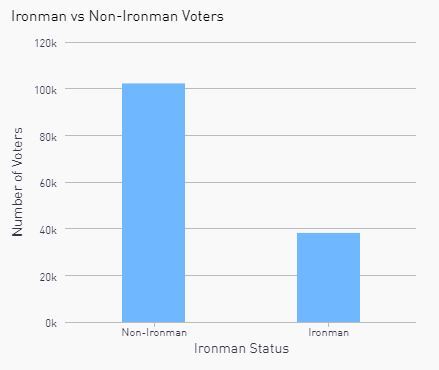 A graph showing the account status (Ironman or not) of voting players.

In the above images you can get an idea of player voting habits during the poll. The vote percentage remained generally consistent at around 83-84% Yes before the Deadman Final issues on Friday evening, and 79-80% thereafter. Immediately following Deadman you can see the amount of No votes overtake the amount of Yes votes for a short but sustained period. It's normal to see the number of votes begin to dwindle towards the end of the poll as most players have already cast their vote by this point. You'll notice there's a spike in activity at around midnight each day (for both Yes and No vote), that's because the daily reminder to vote resets at that time. You can also see that the poll was largely driven by 'main' accounts, but Ironman accounts accounted for a sizeable ~27% of voters.


That's it from us. We'd like to extend another heartfelt thanks to the 141,510 players who voted in this poll, and we're very excited to see you on the Node on October 6th with Group Ironman's release! Did you enjoy this type of poll summary? Are there other bits of voting information you'd like to see? Let us know!