Hosidius House Rework and QoL Poll Blog
Welcome to the Hosidius House rework poll blog that is due to go to an in game poll this Saturday. In October 2018, Mod West pitched a Hosidius rework blog that included changes to the overall layout, Tithe Farm, and Dungeon. After taking on board feedback from the players, he has completed the final changes to the rework, ready for polling.

If you want to learn more about the initial announcement of Hosidius House rework, we recommend you check out the original blog. We're also including some smaller QoL change questions at the bottom of the post. This is part of our effort to clear the backlog and streamline gameplay for older content. The poll for the below questions will be live on Saturday(16/03/2019) and closed on Tuesday(19/03/2019). Rework Changelist This is a list of the key changes to Hosidius described in this blog.

Kourend Rework 2: Hosidius House
The following words are from Mod West to explain all the proposed changes to the largest house of Kourend.

Left: the current Hosidius House layout. Right: the proposed layout. Click or tap the image for an enlarged version
The Kourend Rework that we implemented in late 2016 helped tackle the issues of Zeah's overall shape, the lack of bodies of water and the absence of castles. What it failed to do was address the issue with building size as this would have required tweaking the wall kits, which at the time, was way beyond the scope of the project. If you take the area of all banks in Old School RuneScape, you'll find the largest on the mainland is Varrock west (not including the Grand Exchange, of course) with an area of roughly 165, while the biggest bank on Zeah is Arceuus bank at an area of 324. That's almost twice the size of Varrock west. The size of a bank may not mean much to you, but think of it this way - when 5 people are stood in Seers' Village bank, it seems busy. However, if you have the same amount of players stood in either the Arceuus, Shayzien or Hosidius bank, the place seems empty. This perpetuates the misconception that Kourend is a ghost town which is something we'd like to change. Another issue that didn't get addressed was how bloated a lot of the houses feel, which is a side effect of the building sizes. In this blog I'd like to go through some proposed changes to the design of the Hosidius House in particular. If you have any questions about the rework or my future projects, feel free to reach out to me on twitter, @JagexWest. 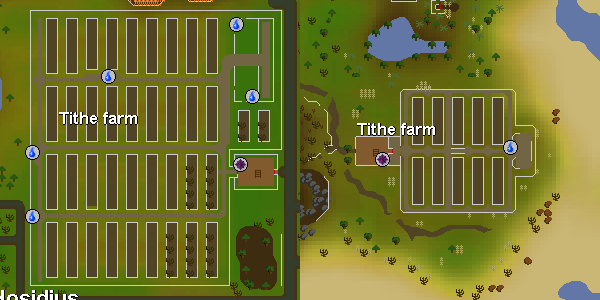 The Tithe Farm is currently the central location of Hosidius House and fills an entire map square for very little reason. Firstly, the Tithe minigame is instanced and a single player (after a fair amount of practise) can at most plant 20 fruits simultaneously, which equates to 5 patches. There are 31 patches - that's about 26 too many. Secondly, the location makes traversing Hosidius House a pain, as there is always going to be at least 1 map square you have to run around to get anywhere else. In my proposal, the Tithe Farm has been shrunk to accommodate 40 plantable locations (10 patches with four spots each) and moved to the south-eastern corner of Hosidius House, where there is currently a farming patch and some cows. Due to the Tithe farm minigame teleport being moved close to where the Glade teleport is currently, the Glade teleport on Xeric’s Talisman has been moved to be closer to the player farm, so as to not impact any farm runs. Also, a notable change is the lack of Logava Gricoller's Cooking Supplies store, or by its more known name, "Xeric's Glade". Now that the farming patch has been moved, the only notable feature here is the Tithe Farm, which has its own minigame teleport so the need for a teleport to be here is reduced. Logavas' store has been moved into the main town market, while the building was moved to the north of the Vinery. Additionally, the guard dogs have retired from their post at the cooking store. 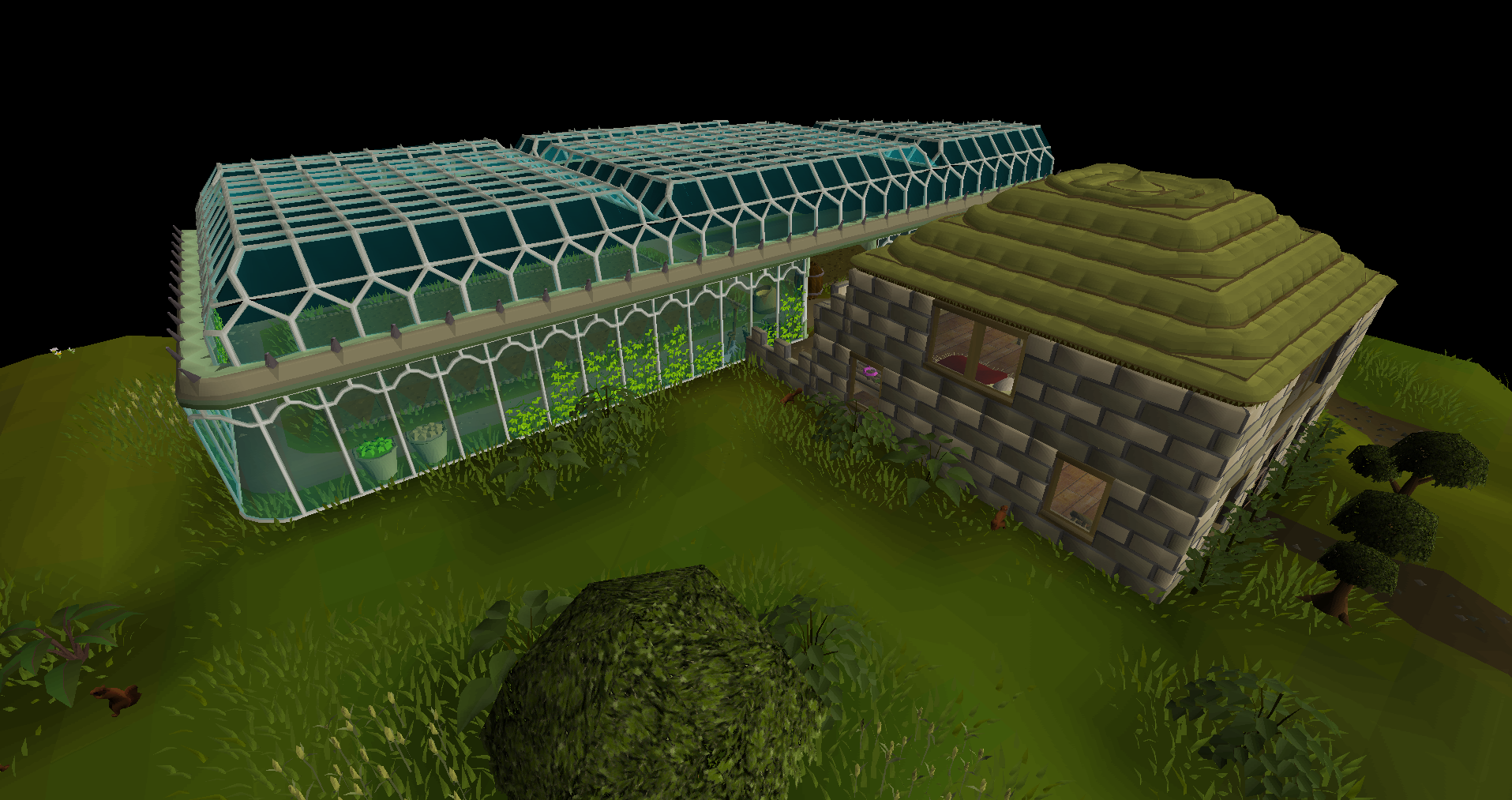 Hosidius Town
Once the Tithe Farm has been moved, a large area of land will have been freed up to be utilised in an interesting way. What's more interesting than a new town! 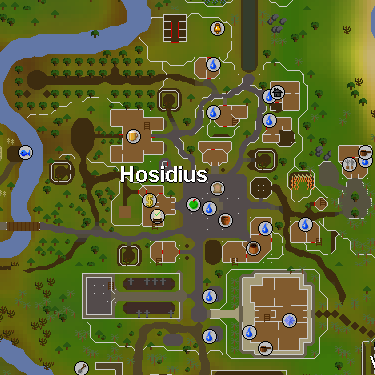 Most buildings seen in the image above are not new, but rather relocated, and in some cases have had their layout changed. The only new buildings are the ones directly north of the Farmers Market and the rounded building east of the market, which are a Corn Exchange and a Granary respectively. The house of Lord Hosidius has been moved from its previous location east of the Vinery, the chapel has also been moved over and a ruin has now appeared in its wake. Other notable features are the moving of the main bank and the pub, as well as the appearance of a Farmers Market. Most houses and businesses have been moved into this area where the Tithe previously was, this includes: Little Shop of Horace aka. The General Store, Various market stalls, Estate Agents, Farming Store, Food Store, Church, Bank, and The Golden Field Pub. Note that the southern church in Hosidius has been converted into a priest camp. Following this, the priest Charlie Brown decided to move away from the area. There are a few new additions around the outskirts of this town too. To the south is the new location of the farming patch and the Glade teleport, to the west is a ruined temple and to the north there now features a flax field and some cows. 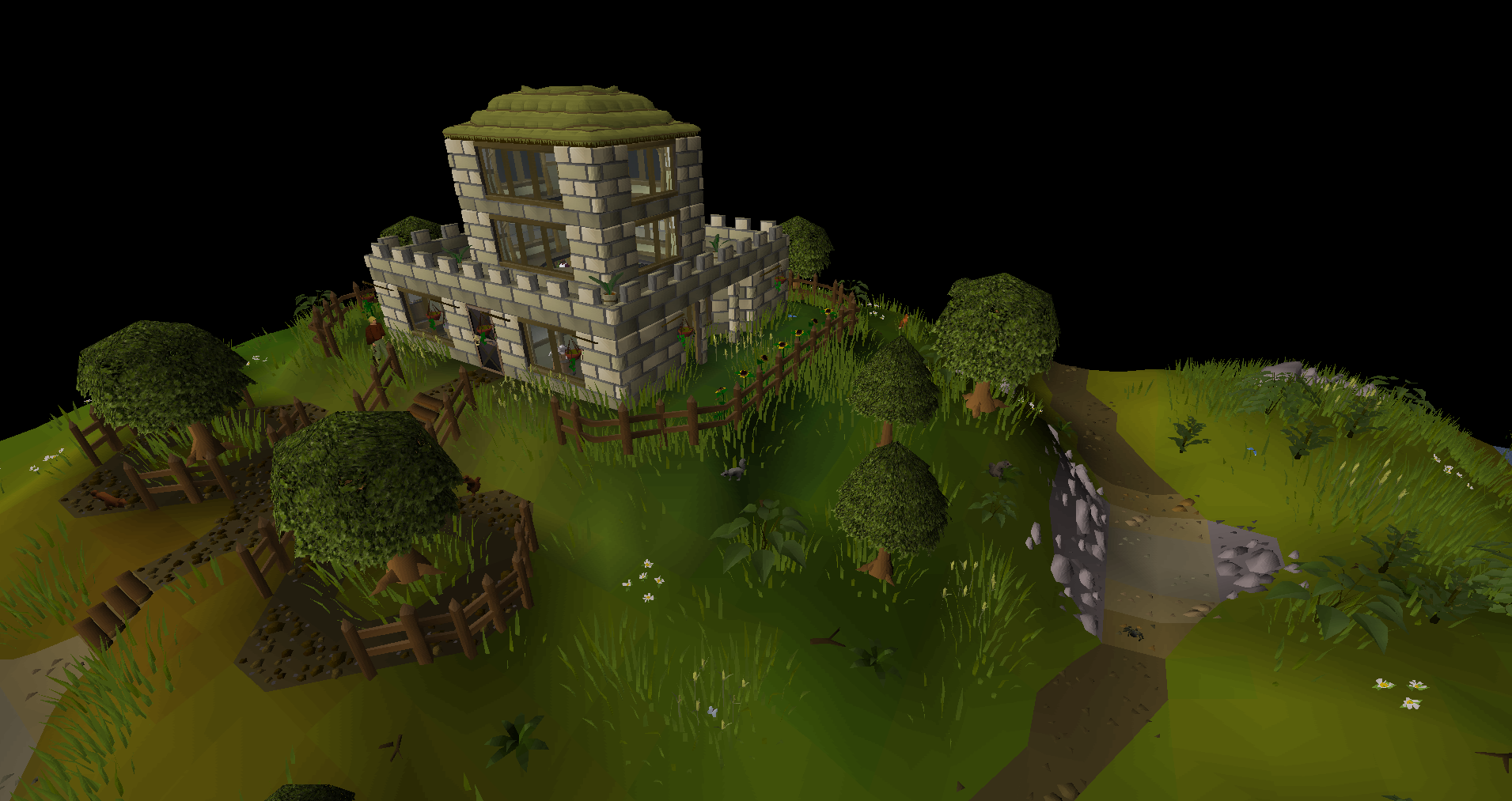 Western Hosidius is now far emptier due to the houses being moved into the town, giving more space for the Hosidius kitchen, as well as reshaping of the Mess to have a smaller footprint. Another notable change is Watson's house - he's had a bit of an upgrade. 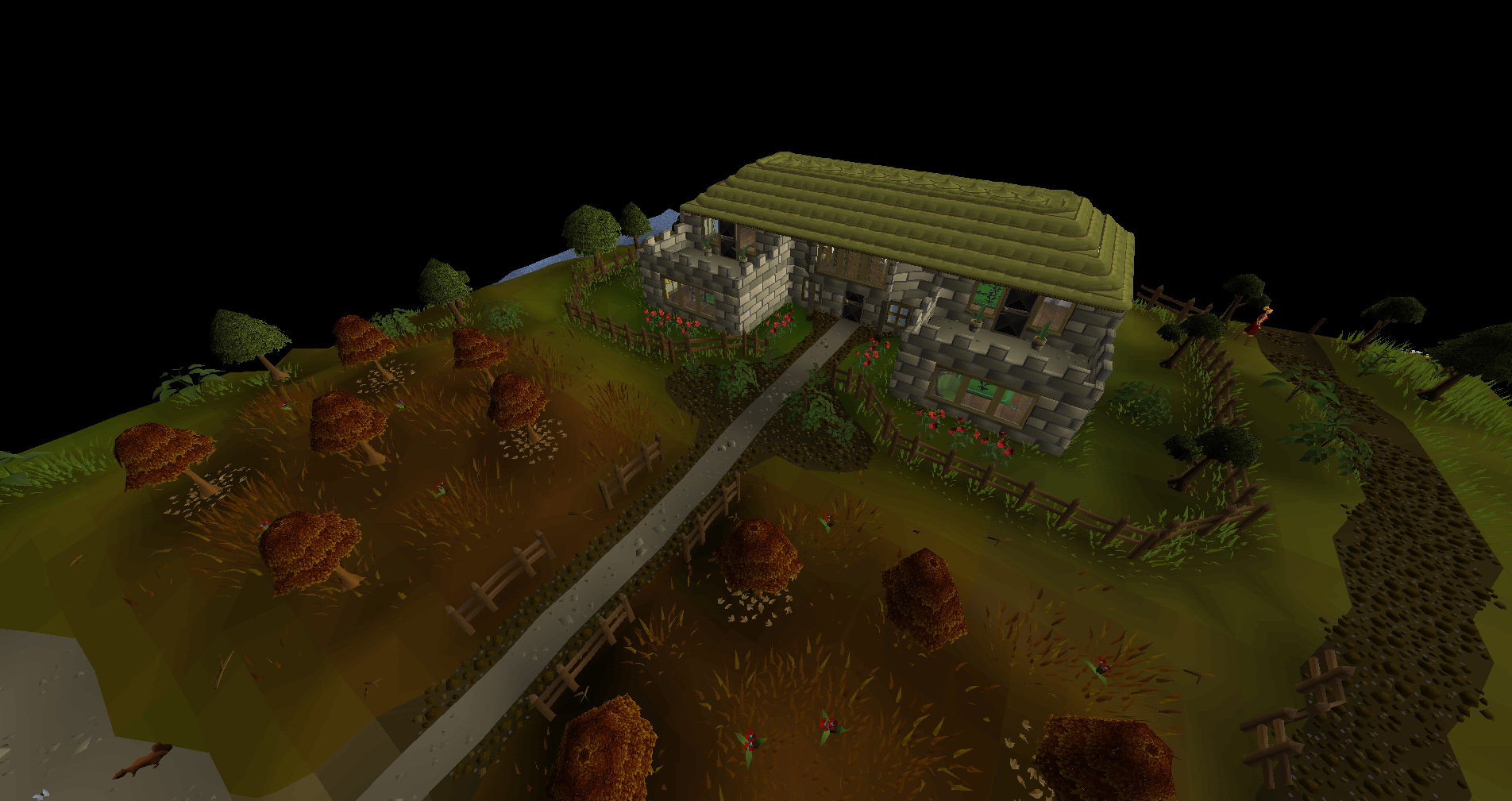 Ruined Temple Dungeon - aka ‘Hosidius Dungeon’
Those of you who read the original blog may remember a unique dungeon that was pitched for the Hosidius House. The design is still a work in progress and can be expected to be revisted at a later date. In the meantime, it has been removed from this poll blog and won't be polled until we are more confident in committing to this piece of content. 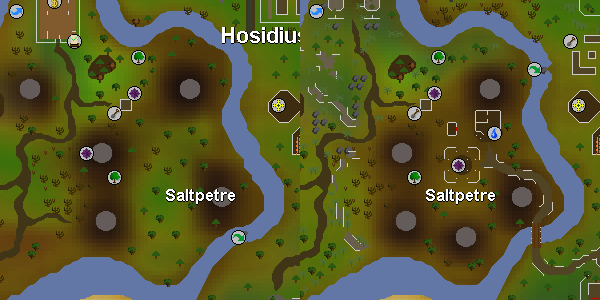 The Forthos Ruin is a relic of old Kourend, a stronghold that was utilised during the war of the five houses. After King Kharedst I rebuilt the kingdom, he demanded all strongholds be abandoned and a single castle would be built on the fields of war where the main battle took place. Before the war, Hosidius House was built around a Saltpetre deposit - this invaluable resource is what made Hosidius House the powerhouse of farming trade that it still is today. However, the old town is now occupied by a small company that operate the Saltpetre distribution to all of Kourend. Due to the moving of the bank, you'd imagine this may make collecting saltpetre a hassle, but worry not! The saltpeter deposits have been moved closer together and a deposite box has been added in the centre of them. The clerk who accepts saltpetre donations has also been moved here. The shortcut has been moved farther north and the shortcuts old location now houses a bridge. This improves the flow of the area and puts the spirit tree almost as close to the farming patch as the house portal. 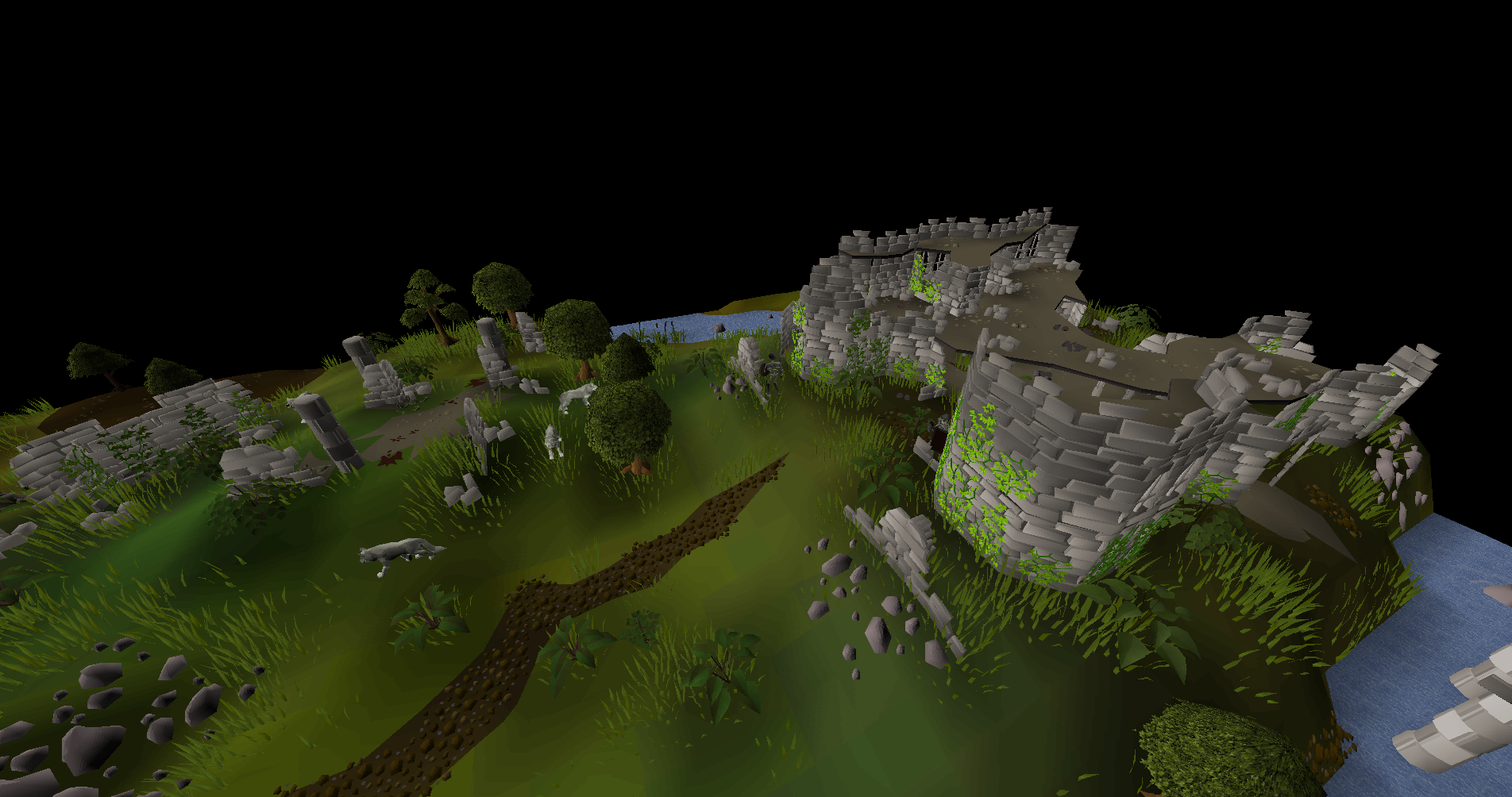 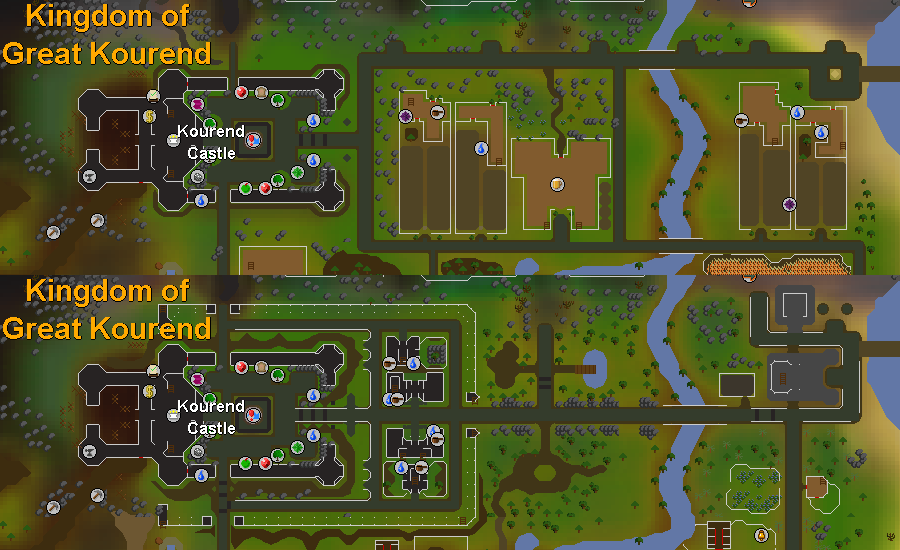 Kourend castle has always felt like part of Hosidius House, this is likely due to it sharing the same style of paths. These paths don't really fit the Hosidius House all too well due to being a house that focuses on farming, not Roman style roads. The entrance has now been improved graphically and raised to give a more imposing feel. Now that Hosidius town has all the houses that used to take up this space, opportunities for parks and houses for the council arise, creating a small central town of its own. This helps to create a buffer around Hosidius house, avoiding Kourend looking like a kingdom sized city. This will be explored further with Arceuus house and Lovakengj house. 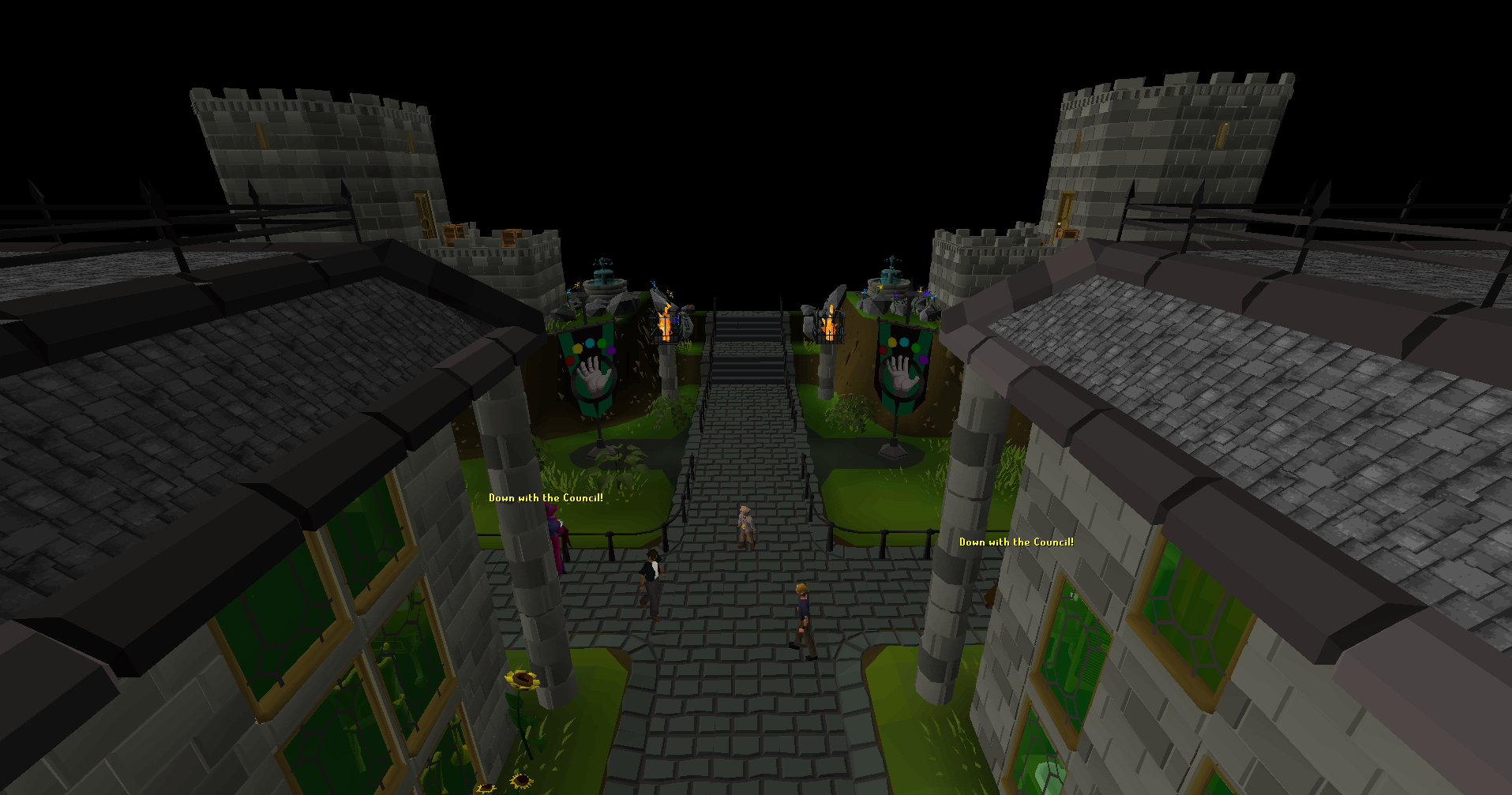 ~ Mod West
Poll Question #1
Should we add an updated version of Hosidius as described in the blog?

QoL Changes
As mentioned at the top of this blog, we would like to take this chance to also poll some of the changes that have been requested in the past.
Poll Question #2
Should the Salve amulet (ei)'s appearance be adjusted to make it easier to tell apart from the Salve amulet (e)?
Poll Question #3
Should the Heraldic helmets and shields with God Crests that can be painted in your POH (requiring 70 Prayer) count as God items when worn?
Poll Question #4
Should spots that Bird houses can be built have a Left-click "Build" option when empty? This would build the highest tier Bird house you have the Hunter level and parts in your inventory for.
Mod Tide has been hard at work improving the gold-crafting interface to make it clearer and more user-friendly. The proposed version can be seen below: 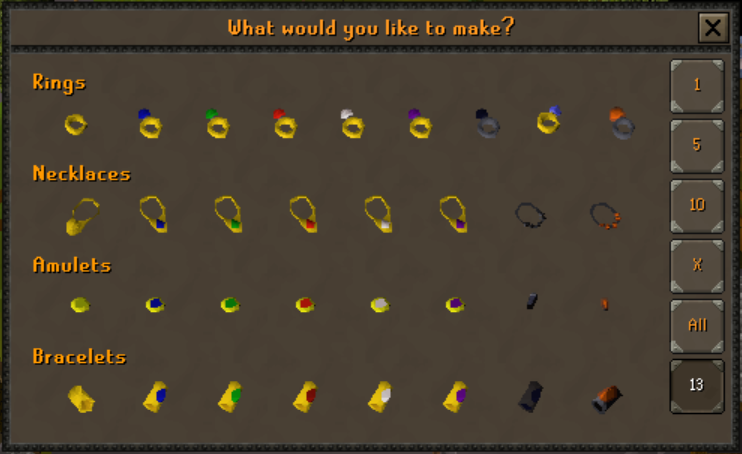 Poll Question #5
Should the gold crafting interface described above be implemented in-game, replacing the existing one?
Poll Question #6
Should the Dramen staff have its autocast option removed? Following the recent autocast change, equipping it for Fairy ring travel disrupts the autocast settings on staves players use for combat.
In the recent Song of the Elves poll, Crystal tools passed with flying colours. These are a tier above the standard Dragon pickaxe, axe and harpoon and will be gained obtained from Zalcano, the new skilling boss that will be found in Prifddinas. Because they will also require the base Dragon tools to be made, players will have to choose between their Infernal tools and these new Crystal ones when they are released. With this in mind, we would like to offer the change below so that some players who wish to make the switch are not forced to use all the remaining charges on their Infernal tools.
Poll Question #7
Should players have a right-click option to remove the Smouldering stone from their Infernal axes, harpoons and pickaxes? This would return the equivalent Dragon tool but destroy the Smouldering stone in the process.
Poll Question #8
Should a right-click option be added to Mosol Rei for players who have completed the Shilo Village quest for entering Shilo village quickly?
That’s everything for this blog. As always, be sure to share your feedback with us on our social channels.