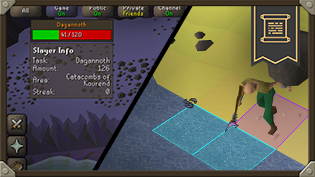 Welcome to the new Android Client Open Beta! The Beta client is now live for testing - and we're so excited for you all to get stuck in.


We'll be using this newspost to communicate FAQs and document any known bugs and hotfixes that might arise. It'll be updated as needed, so be sure to check in regularly!


If you have general issues with the mobile client, your first port of call should always be the Mobile Support Hub, which you can find here.


The FAQ for the Enhanced Client can be found here.


To report a bug, check out the official OSRS Discord server here.


Please note, the minimum specifications for the new Android Client Open Beta are:

If your device does not meet these specifications, you will be unable to participate in the Android Open Beta.

How can I participate in the Android Open Beta?


If you already own the non-Beta version of the app, you'll be prompted to update your existing Old School RuneScape app, replacing the Beta version.

If you're currently unable to opt into the beta via the Google Play Store, don't worry - sometimes app updates can take varying amounts of time to reach everyone's devices. Keep checking back via the Old School RuneScape store listing to see if the opt-in option is available.


If you have not opted in already, you should do the following:

How can I leave the Android Open Beta?


To go back to the previous client, you are required to uninstall the Beta version because an update will not be offered automatically.

The new Android Client Open Beta will bring some of the new client features to mobile for the first time, including (but not limited to):


These are known issues which we are aware of going into the new Android Client Open Beta.

We'll be listing new bugs and issues along with their status here. A lot of these issues are likely to be client-based rather than content based, which means they are unlikely to be hotfixable.


During the Android Closed Beta, we used Discord as our main channel to communicate between playtesters, QA and our developers. The new Android Client Open Beta will be completely open (hence the name!), and therefore we're unable to provide the same level of support and direct responses as we did for the Closed Beta.


We reckon a survey will be the most efficient method of gathering your feedback – the link to this Survey can be found here.


We'll use the information we collect to understand where we need to focus our efforts the most to make the mobile client as good as it possibly can be.


Thank you for leaving your feedback!

When can we expect an iOS Beta?


We're still aiming to have a Beta for iOS in the near future once we've completed our initial steps for Android. We'll be looking to share news on this either in a Gazette or another round-up summary.

Discuss the new Android Client Open Beta on our official forums, on the 2007Scape subreddit, the Steam forums, or the community-led OSRS Discord in the Android Beta category!