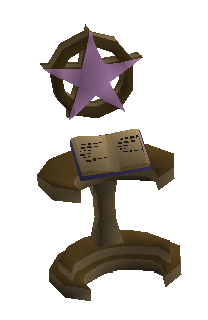 Teleports from the Lunar and Ancient Spellbooks can now be turned into Teleport Tablets at a lectern on Lunar Isle and in the Ancient pyramid (Jaldraocht) respectively.

In addition, we’ve made an important change to certain teletabs to reduce luring. The ‘break’ option on the Arceuus Cemetery Tablet and the new Lunar Ice Plateau Tablet has been made right-click only. The warning message has also been removed from both.

Wow, we were really buzzing to get these sorted, huh?

In the first of many updates voted on by you in Poll #73, we've made the Beekeeper Random Event quote-unquote "less annoying" by updating the menu. The Random Event has also be re-enabled on mobile, for those of you who like to beekeep on the go.

We've also taken this opportunity to update a few other annoying menus in the rest of the game. This is something we've wanted to do for ages, but because so much of the UI was still in an older format, we haven't been able to make significant changes until now. You'll see lots of interface changes trickling out over the next few weeks as we make conversions, but rest assured, they'll all keep that nostalgic 'Old School' feel.

For this week, the only other menu we're changing is Yrsa's Shoe Store in Rellekka.

If you're feeling the sting of not having a Beekeeper Outfit of your very own yet, don't break out in hives - this will be coming, along with the rest of the Poll #73 changes, in the next few weeks.

There’s still time to vote for your favourite video makers, artists and streamers in the Golden Gnomes Awards!

Casting your vote is super easy – just head to this page and fill out the form. But hurry as the voting closes October 4th at midnight.

May the best ‘scapers win!