Here’s your chance to learn about the main game rewards for Trailblazer League before you cast your vote!

Are you excited to blaze a trail across Gielinor, forging your own path, beset by danger and peril on all sides? You are? Then you’ll be even more excited to vote for the amazing rewards which await you in Leagues II – Trailblazer!

As you complete tasks in Old School RuneScape Leagues, you’ll earn League Points that can be exchanged for prizes in the League Reward Store back in the main game.

Just like the Twisted League rewards of yore, these items will be purely cosmetic and tradeable, unless otherwise stated. The point values listed below are calculated under the assumption that all rewards pass the poll – should any fail, we may have to readjust the difference between point costs to make things fair.

Alright, now that’s out of the way, shall we have a look at the goods? 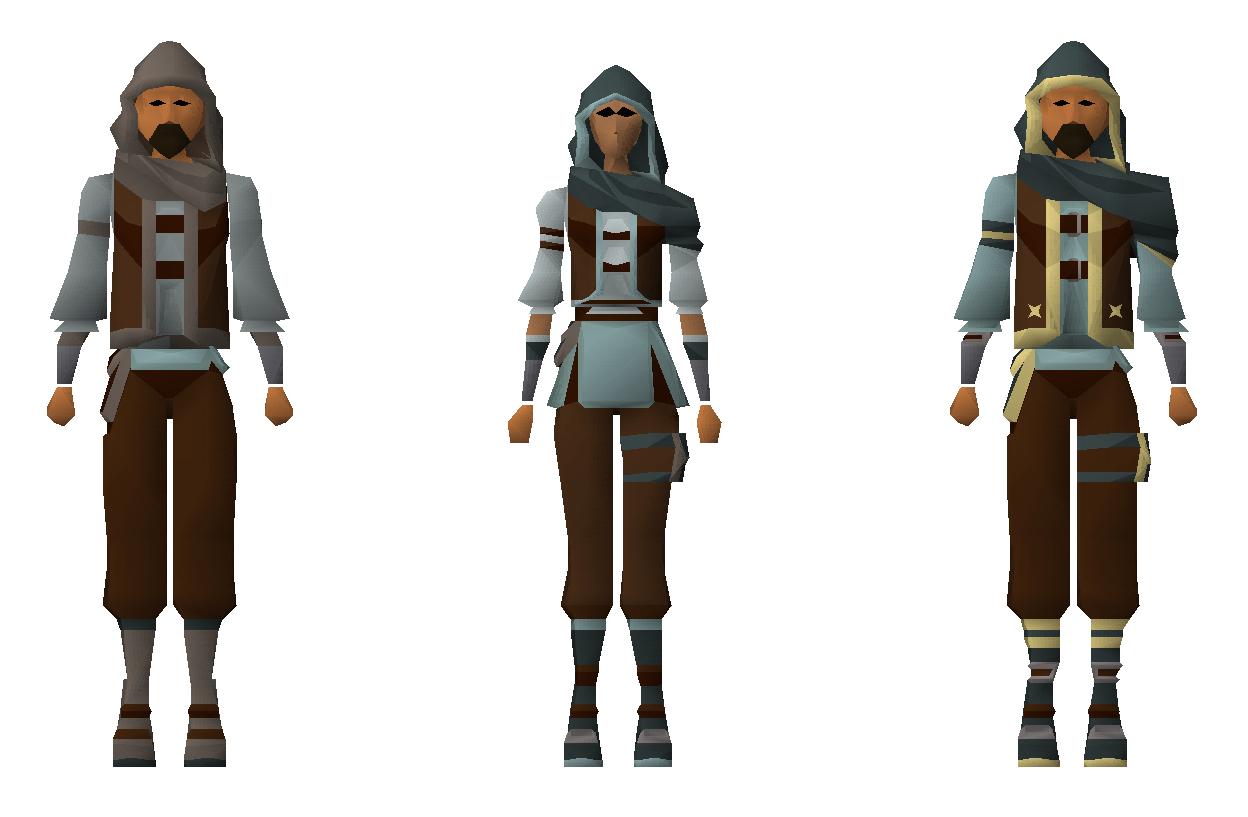 The Relic Hunter outfit gets a Trailblazer twist! Should this game-changing getup pass the polls, you can use your League Points to unlock not one, not two, but THREE tiers of fashionscape-y goodness. Each tier will be exponentially more expensive than the last, so if you’re strutting around in Tier 3 everyone will know that you’re a Leagues master. Just sayin’.

All three tiers will be tradeable and storable in the Player Owned House.

Question 1:
Should the Trailblazer Relic Hunter Outfit, a cosmetic armour described in the blog, be added to the Leagues Reward Shop? This will consist of three tiers of cosmetic outfits that represent the League.

Show your support for your favourite League (so far) with this themed banner! If you don't fancy using up a main-hand slot, this item can also be proudly displayed in your Player Owned House - although you'll have to keep reading to find out how!

This item would cost a relatively low amount of points.

Question 2:
Should the Trailblazer League Themed Banner, as described in the blog, be added to the Leagues Reward Shop? This item will be like the Twisted League banner and held in the main-hand slot.

Once you’re done jet-setting all over Gielinor, won’t it be nice to click that friendly blue circle and head back home? And wouldn’t it be even nicer if you had a funky home teleport animation to do it with?

Well you’re in luck, ‘cause that’s what this little scroll will teach you to do! Once you’ve learned the trick, your home teleports will look a little different. Instead of drawing a chalk circle, you’ll draw a compass, and before you know it you’ll be swept back home in a dramatic sandstorm. Finnish trance soundtrack not included.

This wondrous ability costs a relatively low amount of points – a real bargain, if you ask us!

Question 3:
Should the Trailblazer League Home Teleport Animation, as described in the blog, be added to the Leagues Reward Store? 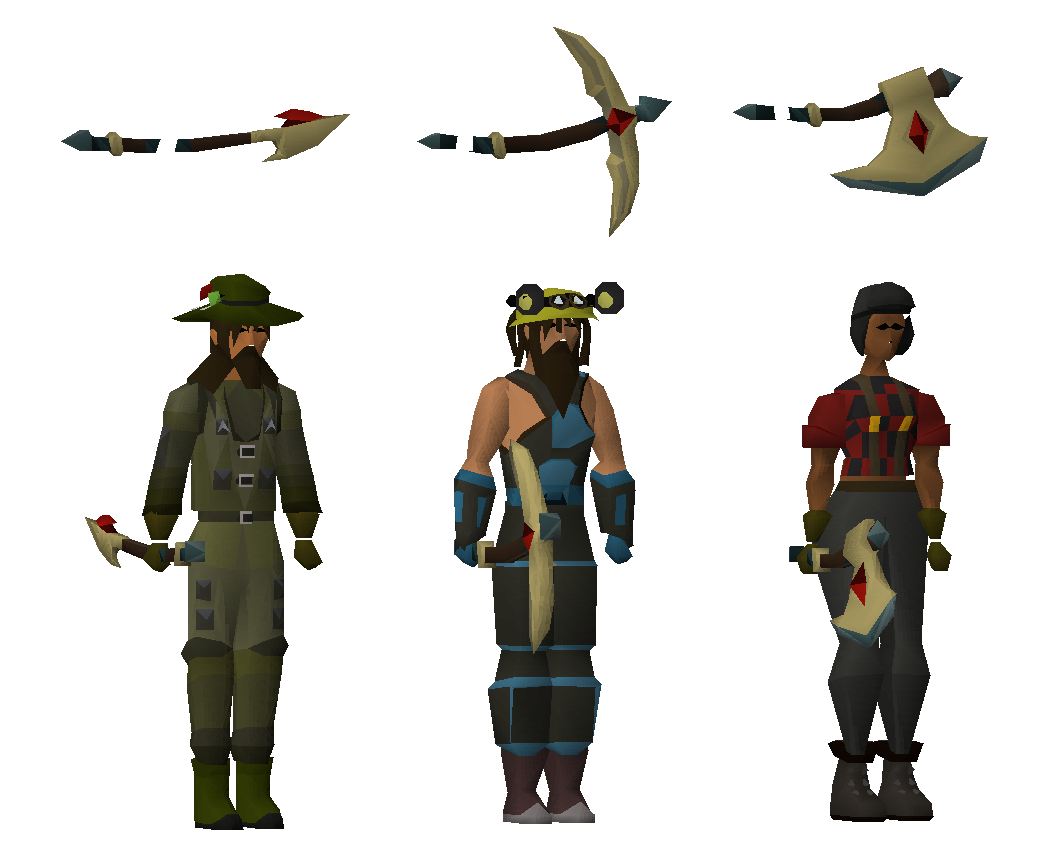 Look, we know. Dragon tools look very cool already. But you know what’s cooler than being cool? Having an awesome Trailblazer League themed version of those same Dragon tools!

This ornament kit will change the appearance of a Dragon Pickaxe, Dragon Axe or Dragon Harpoon, including their infernal versions, to globetrotting Trailblazer League theme. One kit will cover you for exactly one tool – if you want to decorate all three, you’ll need three kits!

Should you decide you’d rather go back to that good old pointy red aesthetic, you can revert the tools at any time to retrieve the kit.

Each kit will set you back a medium amount of points.

Question 4:
Should the Trailblazer League Skilling Tool Upgrade Kit, as described in the blog, be added to the Leagues Reward Store? Each kit will allow the player to add a Trailblazer theme to their Dragon Pickaxe, Dragon Axe or Dragon Harpoon.This will also apply to the infernal tool versions. 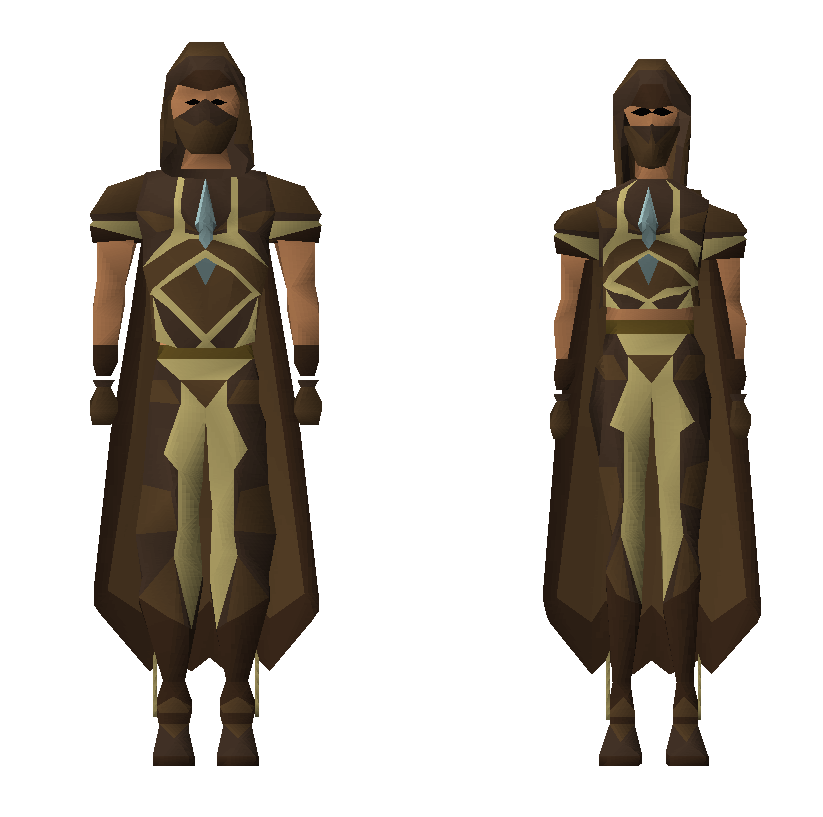 We know you love running everywhere, so you may as well be doing it in this all-new Trailblazer-themed Graceful Set Ornament Kit. You’ll look flashier than ever before as you parkour around Gielinor’s rooftops. You can even dye right over any previously recoloured pieces!

This reward costs a relatively high amount of points, but you’ll get a pack of six kits, one for each piece of the Graceful Set. Should you decide that you’d like to go back to basics after all, you can revert the colour, and your Graceful Set will return to the default colour.

Question 5:
Should the Trailblazer Graceful Set Ornament Kit, as described in the blog, be added to the League Reward Store? This six-pack of kits will allow you to add a Trailblazer theme to any and all parts of your Graceful Set.

Way back when we pitched Twisted League, we mentioned that we wanted players to be able to build a League Room in their Player Owned House where they can proudly display their hard-earned trophies.

The room in question will require 27 Construction to build and costs 15,000 GP. It will contain the following hotspots:

You’ll find something to build in each hotspot regardless of how many League rewards you’ve purchased, so housebuilders of all stripes will be able to enjoy the room.

Question 6:
Should we add a League Trophy Room to the Player Owned House, as described in the blog? It will require 27 Construction and 15,000 GP to build. If this question does not pass, players will still be able to store League Trophies in the Toy Box.

While concepting this room, we realised that it could use some additional items to make it feel more homely. In addition to the main game rewards listed above, we are also offering the following rewards for Leagues II – Trailblazer. 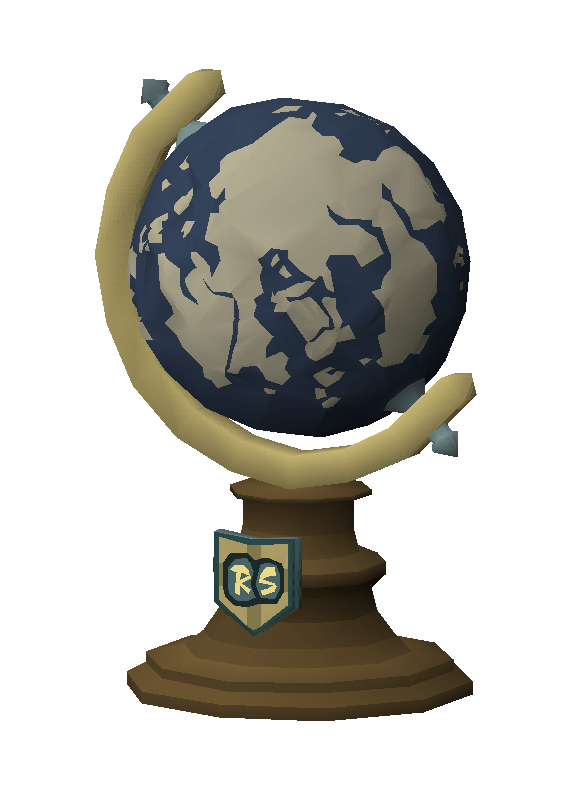 An elegant globe with a map of Gielinor emblazoned across the front. This superb sphere will round out your League Trophy Room nicely and fits right into the statue space. Removing the Globe from the space will return it to your Inventory.

The Globe would cost a medium amount of points from the Leagues Reward Store.

Question 7:
If Question 6 passes, should a Trailblazer Globe Statue be made available in the Leagues Reward Store? It could be displayed in the League Trophy Room in the Player Owned House. 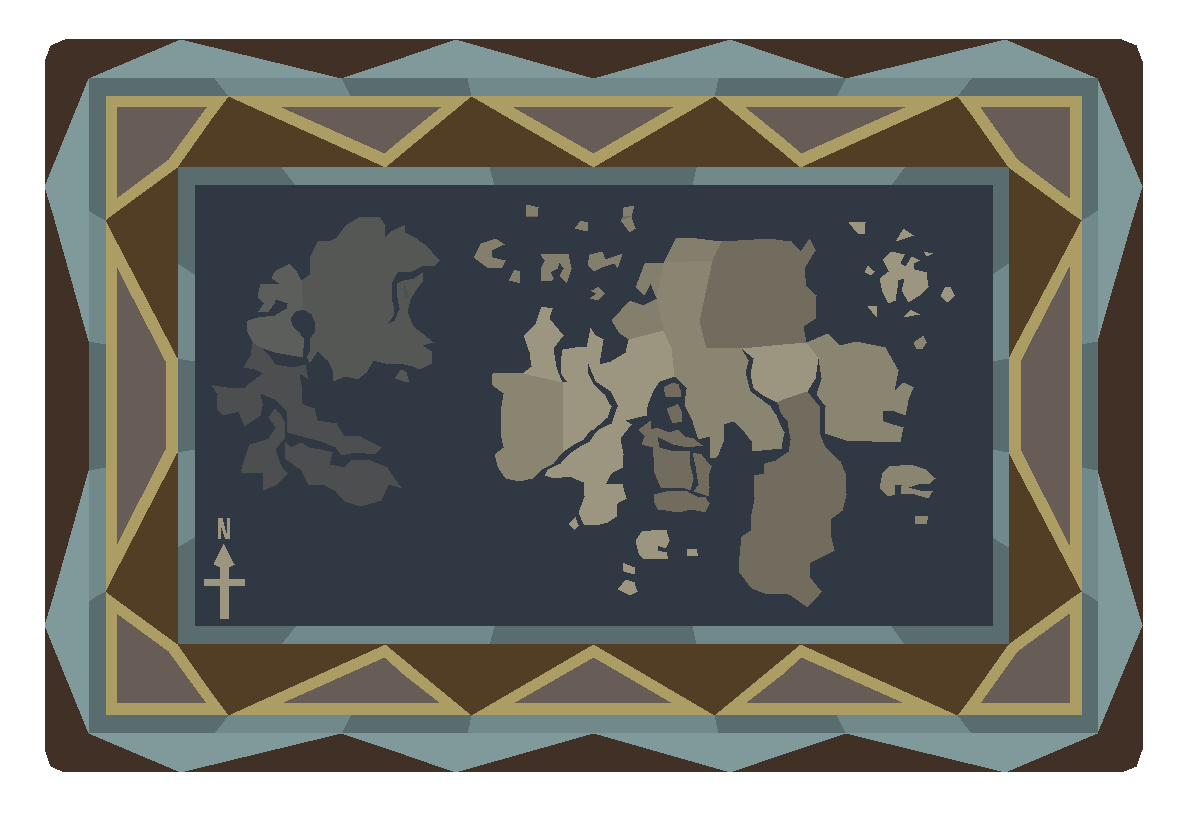 Relive your travels around Gielinor with this map-shaped rug – it really brings the room together! The Trailblazer Rug will, of course, fit into the rug space of the League Trophy Room in your Player Owned House. Should you choose to swap it out with something else, you’ll get the rug back safe and sound.

Just a note – this rug is different from the other ones in your Player Owned House. If you change it, it won’t affect hotspots in the rest of the house.

The Trailblazer Rug will cost a relatively high amount of points.

Question 8:
If Question 6 passes, should a Trailblazer themed rug, as described in the blog, be added to the League Reward Store?

As a reminder, if you have League Points left over from the previous League, you will still be able to use them to purchase any rewards you choose from the Reward Store – including those from the Twisted League! 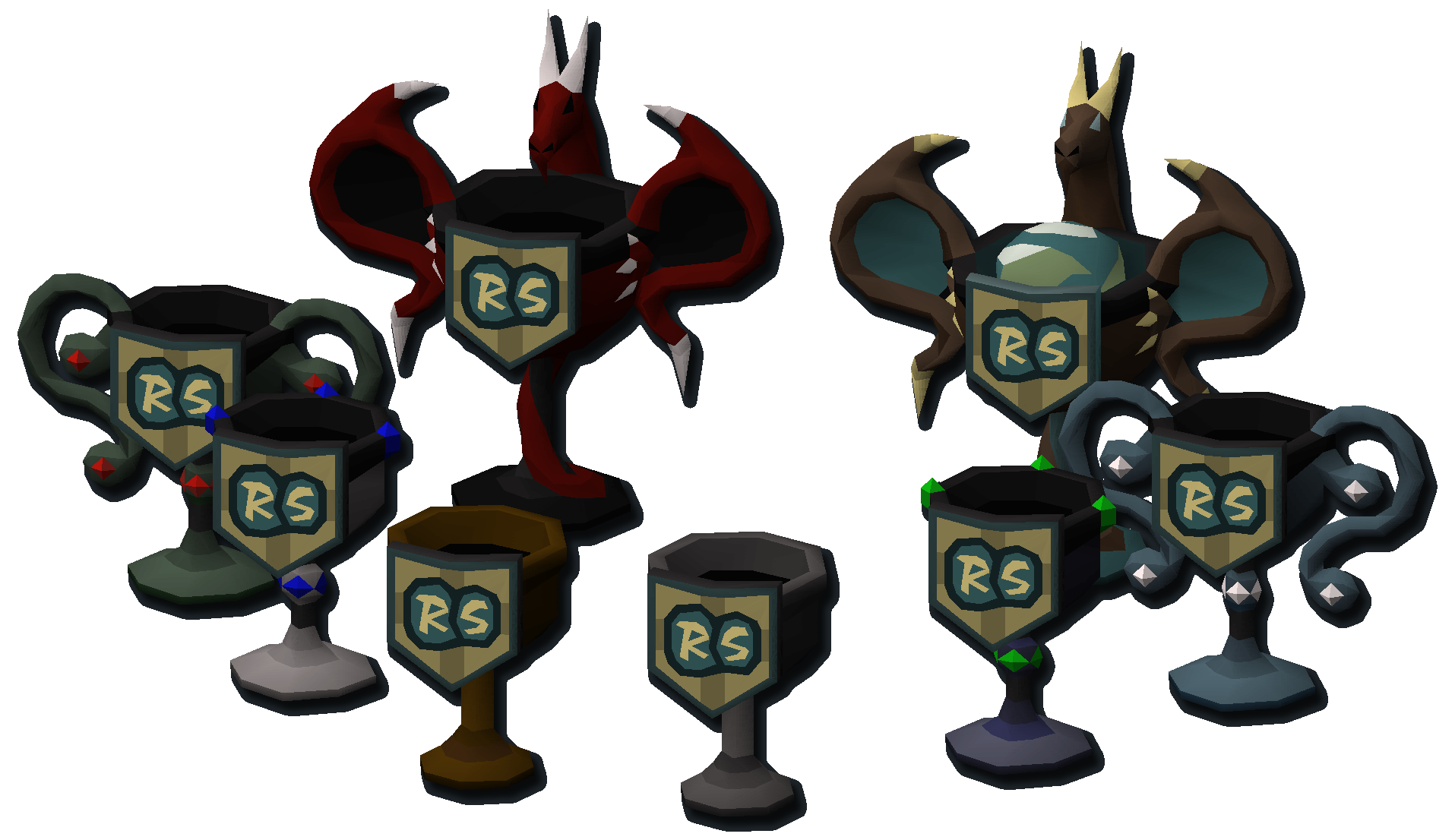 We’ve heard your concerns regarding a trophy for the Top 100 in the Trailblazer League. With that in mind, we’ve decided to remove this from the concept for the time being. We know the dedicated players of the League want to be rewarded for their efforts, and we want to give them something to strive for after unlocking every reward, but equally, we want to get the design right. We want a reward that lets you show that you're one of the very best players, but with fairer criteria than play time alone.

With that said, we will be sticking with the original trophy thresholds as seen in Twisted League and the percentage bracket-based reward system for now.

These cosmetic and wieldable trophies will represent the tier you placed in. The tiers are listed below:


Unlike other League rewards these trophies will not be tradeable. Their purpose is to show off your skill and dedication to the League, so it wouldn’t be fair if just anyone could get them!

Held in the off-hand slot (aside from Dragon, Rune and Adamant, which are two-handed), these trophies will have a unique emote that you can access by right clicking them.

As always, we welcome your thoughts on this poll blog, and we’ll be making adjustments as feedback rolls in. Check the changelist at the top of this blog for the latest updates!