This week sees the release of the first changes from the recent PvP Changes and Upcoming Poll Blog. These include changes to the PID system in PvP and Bounty Hunter worlds, the improved Looting bag and allowing players the ability to toggle receiving Bounty Hunter targets past level 10 Wilderness. We also have an update on the progress of the in-game Collection Log.

PvP Changes
In July we discussed some changes we wanted to make to PvP that aimed to address certain areas of concern prior to looking at larger content updates. This week's game update includes some of these changes, with the remaining ones expected to be released over the next few weeks. Upgraded Looting Bag Functionality The Looting bag has received a big update to its functionality! It now has an Open option which, when selected, makes every item you pick up go straight into the Looting bag whilst in the Wilderness. Items will go into your inventory when the Looting bag is closed. You can still Check to see the contents of the bag by right-clicking. We've also reduced the cost of the Looting bag in the Bounty Hunter store from 150,000 points to 10,000.

PID Changes On Bounty Hunter, PvP and tournament worlds, PID will randomise more often. In these worlds, PID will randomise every 40 to 60 game ticks (24 to 36 seconds) per player rather than the previous 100 to 150 game ticks (60 to 90 seconds) per player. Feel free to try out the changes on these worlds and let us know how you find them. From there, we can make any necessary adjustments and roll them out to the rest of the game. The way PID works within the duel area has not changed. Bounty Hunter Targets in Deep Wilderness You can now speak to the Emblem Trader in Edgeville to toggle the ability to receive Bounty Hunter targets above level 10 wilderness. By default you will still receive targets above level 10 Wilderness. To change this, speak to the emblem Trader to toggle this option.

We're moving the PvP World Rota Asssignment to Period B.

Progress Update: In-game Collection Log
Whilst it's not being released this update, we thought you'd like to see the current progress of the in-game Collection Log. The following words are from Mod Lenny who has been the lead developer of the project. When we set out to build a Collection Log, the first step was to compile everything that players may like to see in the list. This meant asking the community what they expect to see (tweet @JagexLenny with your suggestions still!) which provided a lot of helpful insight. Not all the ideas were possible just yet and the log is intended for more than showing unique drops and Clue rewards. As such, the list is not yet complete and new items may be added as development continues. 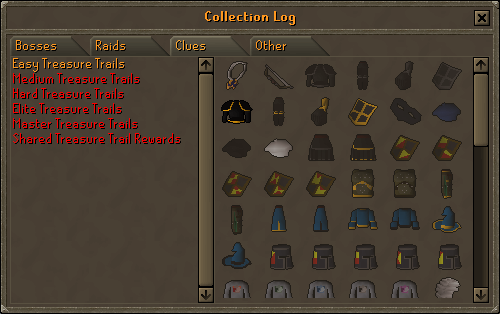 Using a rough list of items to work with, I began structuring the data. Due to the huge amount of data involved, I spent time writing scripts to help compile it all into the formats that I may require during development. Once the data was structured and implemented, I moved on to showing this in game. I've built an early version of the interface, split it into four tabs (bosses, raids, clues and other), with the possibility of adding a fifth for Slayer. Each tab shows a list of everything under that category and clicking on any of these will display all the associated items in the Log. Unobtained items will show up translucent and duplicate items will have a number displayed. 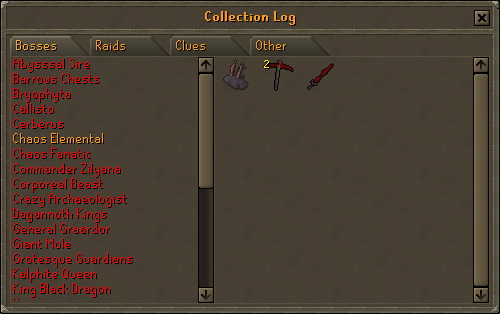 Our team discussed the extent that the log should go to. One of the most debated topics concerned tracking items that come from a specific source. If possible, rather than just having obtained the item at all, the Log could potentially show how many of your Dragon axes came from the Wintertodt or the Dagannoth Kings. While this would be a great addition, it currently brings too many questions and technical complications. However this would require a more intricate system and a higher level of maintenance in the future, complicating the process for adding anything new to the log. Another hot-topic is logging items retroactively. Untradeables such as pets, Fire capes, Infernal capes, and so on may be logged as we know these were already earned rather than bought. A bigger uncertainty lies in retroactively logging drops earned by Ironmen. We welcome further discussion on this matter. 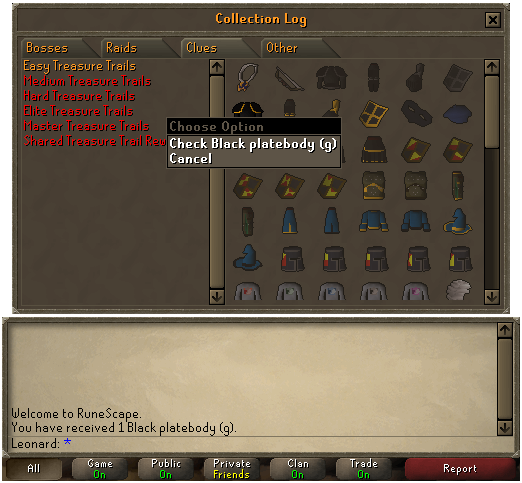 As with everything else in the game, there's a limit to how high we can track the collection of any items included in the Log (for example, the Slayer Log will tell you that you have killed “Lots!” of monsters past a certain point). Given the broad range of items covered in the log, we’ve concluded that various items warrant different limits. The logic here is that you’re unlikely to receive as many Scythes of vitur as you do Nardah teleport scrolls for example. 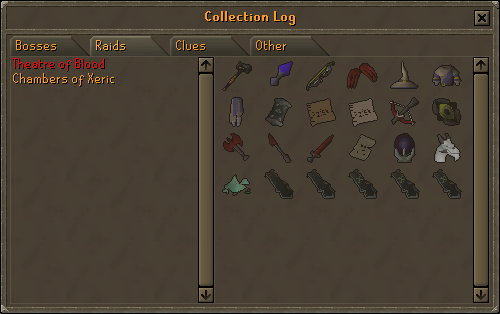 After polishing the interface, we'll begin tracking the data. Once in place, a tracking system will allow the Collection Log to show items that have been collected rather than items that are already possessed. This will need implementing given the different loot systems used by Barrows, Chambers of Xeric, Theatre of Blood, or simple monster drops on the floor. Beyond this, there are a couple of other features which we would like to include such as displaying your kill counts on the Log where suitable and allowing other players to view your Collection Log - possibly in your Player Owned House.