Today is a significant moment in RuneScape’s history, ushering in the next chapter of our cross-play vision and our quest to bring RuneScape to everywhere we can. We have finally arrived on Mobile!

Moments ago, we finished our final pre-launch checks and they are all green. Deployment of RuneScape around the world has begun, marking June 17th as our official launch day for iOS and Android.

Taking it all in, this is really a big deal. You can play 20 years of RuneScape content on the world’s largest gaming platform and it all fits in your pocket. Play on the go and then jump over to desktop if you like, with nearly the same experience, taking everything with you – almost unthinkable!

This is my favorite part… the RuneScape community has been growing in leaps and bounds. Our expectations with the launch on Steam last year were smashed, and by reaching new audiences with mobile, a Tsunami of new citizens are about to embark upon the thriving world of Gielinor. What an amazing opportunity to make new friends and I cannot wait to hear the tales of discovery and accomplishment.

In our mission to find new adventurers and to influence a successful launch on mobile, you helped us smash the last of the pre-registration goals. In fact, all five tiers have now been unlocked (actually, it was yesterday!) and we just hit 1.8 MILLION registrations in total. What a feat! So, all those sweet rewards have been unlocked and will be delivered to you as part of the launch – yes, they are on the way for everyone!

In my mind, there is no better time to play RuneScape. Over the coming months the Elder God Wars really heats up with the City of Senntisten launching next week. We have told you War is Coming, and I am excited to confirm War is Here this July with the first front of the Elder God Wars Dungeon. The fate of Gielinor will be decided across four fronts and each month from July onwards, players will experience a new front on the battlefield as the Elder Gods begin their assault. This will be the most varied and epic dungeon experiences yet, with elements that span across bossing, slayer, skilling and more! This is on top of the returning updates from our Ninja Team, fan-favourite events like The Beach, several technical improvements and other surprises to come that will make this a summer to remember.

Just before signing off, I’d like to leave you with one last thought.

These are fantastical times and this year, RuneScape has been in existence for 20 years. We broke several records, and membership is at its highest level in six years. Players are playing the game more than ever before. And then I think back to this. 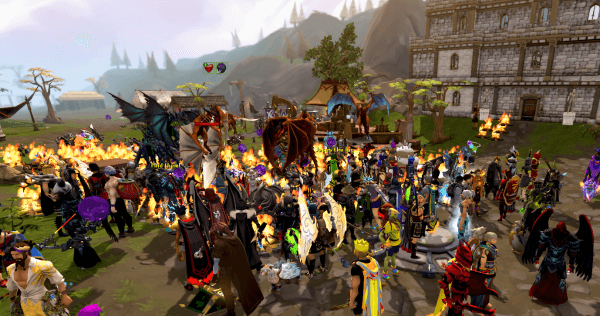 With moments like these, knowing how much effort our team put into this launch, makes me proud of this achievement - knowing we can make RuneScape for many more years to come, and that it's something we can do together!

So, on that, there’s nothing left to say expect let’s pull up the welcome wagons and show these new citizens what we’re all about! See you in Burthorpe.