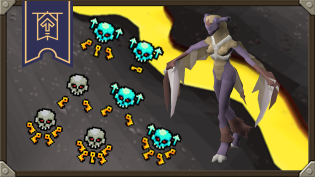 This week, weÆve got some news about the new Android Client Open Beta, Nex Combat Achievements, and Loot Keys!


Before we get to the good part, weÆd first like to apologise for the delay. We'd hoped to get this to you in January, but a few unexpected issues slowed things down.


But now itÆs almost time, and we canÆt wait to hear all your feedback about the new client features making their way to mobile!


A lot of nitty-gritty technical bits arrive in the game as part of this weekÆs update, allowing us to do some final tests and ensure the client is stable before it rolls out officially.


The new Android Client Open Beta will bring some of the new client features to mobile for the first time, including (but not limited to):

WeÆve fixed a number of the issues our fantastic playtesters raised in the Android Closed Beta last November, including bugs related to the XP Tracker and Buff Bar timers. WeÆve also increased the amount of time you can spend outside of the app before it disconnects.


Unfortunately, there are still some known issues that we havenÆt been able to fix in time for the Open Beta. WeÆll be listing these in a separate 'Known Issues' newspost on Monday February 28th. This will be updated as often as needed with any new bugs and other problems we find ¢ itÆs your one-stop shop for communication between our bug-busters and yourselves!


During the Android Closed Beta, we used Discord as our main channel to communicate between playtesters, QA and our developers. The new Android Client Open Beta will be completely open (hence the name!), and therefore we're unable to provide the same level of support and direct responses as we did for the Closed Beta.


We reckon a survey will be the most efficient method of gathering your feedback ¢ and one will be included in the 'Known Issues' newspost.


WeÆll use the information we collect to understand where we need to focus our efforts the most to make the mobile client as good as it possibly can be.

How Can I Get Involved?


If youÆve previously opted into the New Android Client Open Beta, youÆll automatically be eligible for the new client provided your device meets the minimum specs listed below. If you do not want to test the new features, you'll need to opt out - see image below for instructions.


You may find that your app automatically updates the client without being prompted. If this happens to you, youÆll be given notice in-game to let you know youÆre using the new client ¢ and if youÆre ever unsure whether youÆve got the Beta client or not, the message will repeat for your first five log-ins (including world hops). 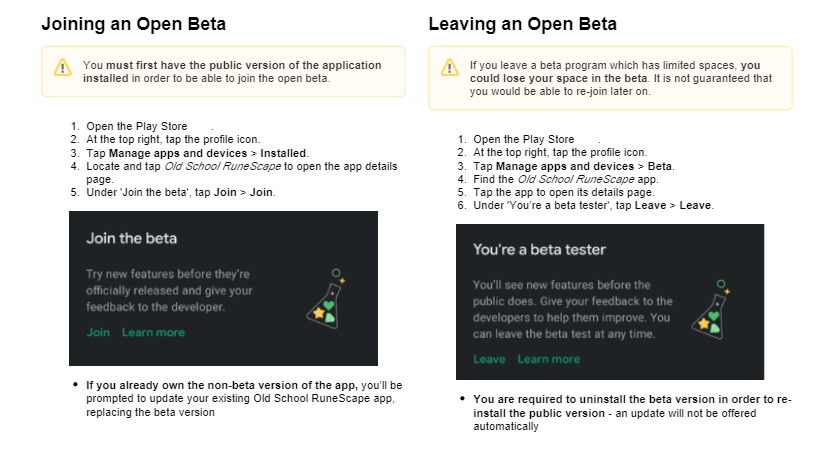 
If you have general issues with the mobile client, your first port of call should always be the Mobile Support Hub, which you can find here.


The FAQ for the Enhanced Client can be found here.


However, if your issue is specific to the new Android Client Open Beta, your best bet is to check the Known Issues newspost once it goes live for all the latest information.


The minimum specifications for the new Android Client Open Beta are:


Please note that if your device does not meet these requirements, you will not be able to participate in the new Android Client Open Beta. If you wish to continue playing without these specs, youÆll need to opt-out of the Beta using the instructions in the image above.


If you're not on mobile but still want to see the new features in action, we're hosting a Feature Showcase livestream on Thursday March 3rd! 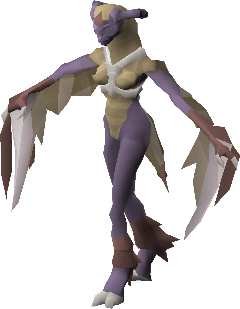 Since the release of Nex, we've been itching to add some additional challenges for you to show your prowess!


So, this week we've added an array of new tasks for you to sink your teeth into. HereÆs a list of the brand new Nex achievements!

Existing rewards for Combat Achievement tiers will remain locked until these new tasks are completed, as normal.


We can't wait to see you all get stuck in!


Next up, a highly anticipated PvP change: Loot Keys for PKing! With this new setting enabled, you can opt to have your PvP opponents drop their loot in the form of a Key. That Key will contain up to 28 of your targetÆs most valuable items, which would otherwise have been dropped on death. 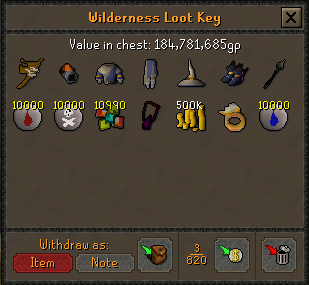 To benefit from this new change, youÆll need to purchase the ability to gain keys from Skully for a cool 5 million GP. You can also speak to him to toggle your newfound ability off and on at any time.


Skully is in Ferox, located slightly East of the banker. Loot Keys are used in both P2P and F2P.

Skulled players will have a Skull icon over their head that shows how many Keys they hold. Initially we said that this would only appear for those with two or more Loot Keys, but weÆve since decided it should apply to any skulled player holding between one to five Keys. 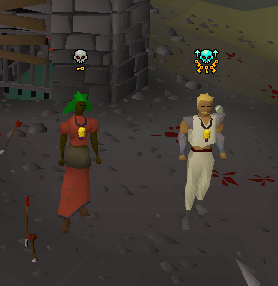 
The total amount of claimed Keys and total value of loot both claimed and destroyed is tracked, and can be checked with Skully.


The effects of being un-skulled and the Item Protect Prayer apply to any items not held in Loot Keys, but not Loot Keys themselves. As a consequence, Loot Keys will always be dropped on death ¢ whether PvP, PvM, skulled, or un-skulled.


Should you be unfortunate enough to die with Keys in your Inventory, they will either be transferred to the player that killed you (if they are eligible to receive them) or deleted.


Iron players will be able to unlock Loot Keys, but please note that they will only have the option to destroy the contents of the Key entirely. 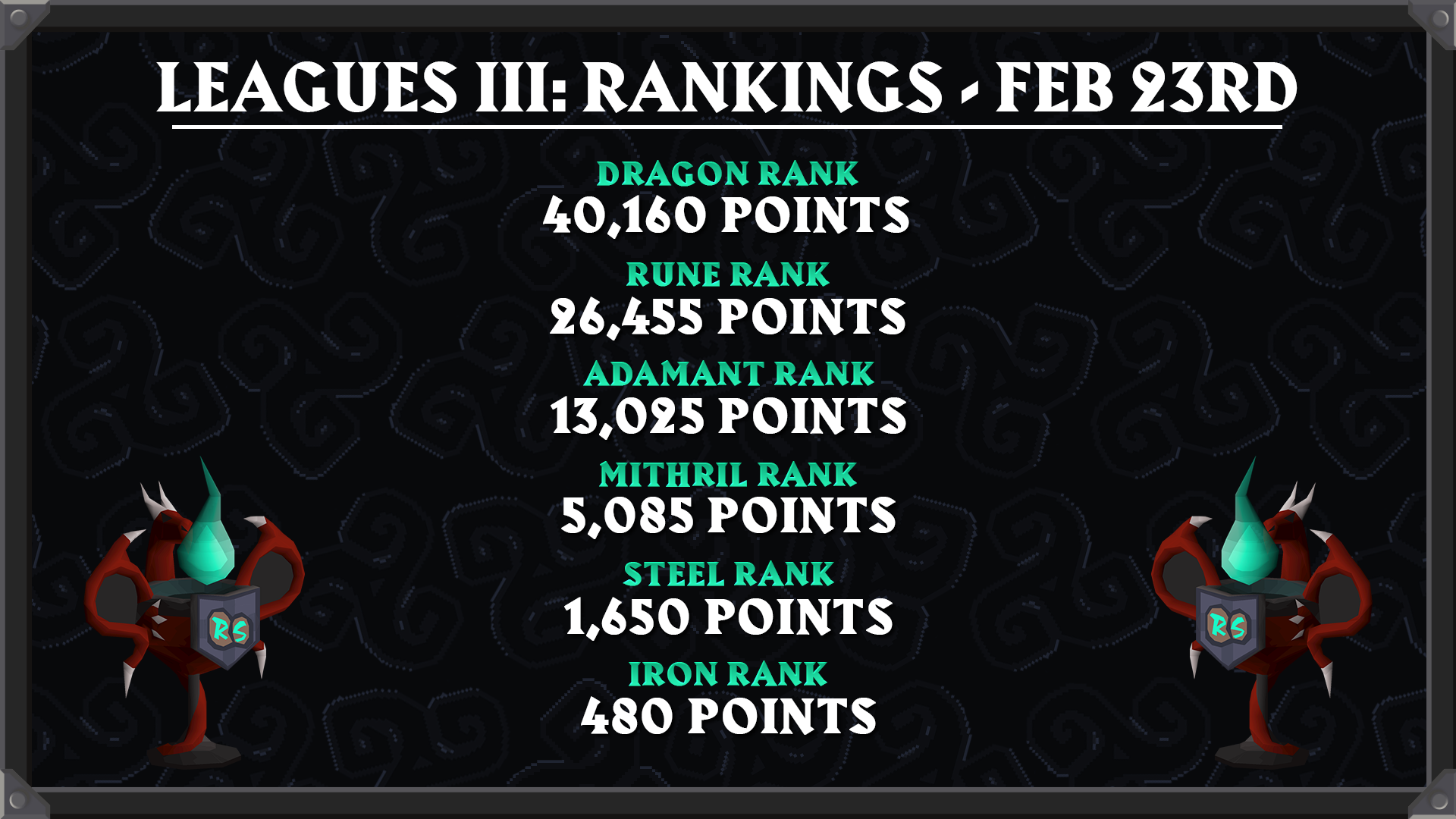 That's it for this week's game update newspost!


Discuss this update on our official forums, on the 2007Scape subreddit, the Steam forums, or the community-led OSRS Discord in the#gameupdatechannel.