We’re taking things to the Nex level – well, an old level, technically – with the return of Nex! This fearsome boss was originally released in January 2011, and 10 years later we’re bringing you a new encounter with this ancient adversary of the Second Age.


Dwelling in the Ancient Prison beneath the God Wars Dungeon, Nex can only be accessed once you complete the Desert Treasure quest (and a small miniquest to open the Frozen Door). Once inside the Prison, players must crush through a formidable army before reaching Nex herself.

This is a work in progress image and not final.


You can take on the boss in groups of up to 80 players, and defeating her gives you all a chance to obtain some highly valuable rewards – including an iconic armour set!

So, what’s this Nex business all about then? Let’s refresh our collective memory...


In the Second Age, Nex was one of the closest followers of an ancient god. Following the defeat of this ancient god and the dawn of the God Wars, Nex was among many imprisoned by the forces of Saradomin.


Years later, a mysterious individual fooled a group of Saradominists into freeing Nex and her allies. Thankfully, the armies of Saradomin, Zamorak, Aramdyl and Bandos joined forces to successfully drive them back into their prison, but the magical protections that contained them were damaged in the process.


As such, Nex’s prison is somewhat… vulnerable. And while officially the followers of her old master are all but gone from Gielinor, there are still a few nefarious types out there who would be happy to see Nex freed once more.

Behind The Frozen Door


To reach Nex, players must first gain access to the Ancient Prison by unlocking the Frozen Door in the God Wars Dungeon. This iced-up access point has actually existed since the Dungeon was launched, but has remained sealed – until now!


To open the door, players will need to complete a miniquest which begins after completing the Desert Treasure quest. A messenger will approach with a letter from a mysterious individual...


Note: the messenger will spawn shortly after Desert Treasure is completed. If you’ve already finished that quest, they’ll appear shortly after you log-in.


Once inside the Prison, you’ll be met by Ashuelot Reis, a follower of Guthix who has dedicated herself to the unenviable task of keeping Nex contained. She'll give your group a brief overview of the Prison complex before asking you all to join her outside Nex's chamber.


Within the Prison, you’ll can take on four new foes from Nex’s army: Spiritual Warriors, Spiritual Rangers, Spiritual Mages and Blood Reavers. As with the rest of the God Wars Dungeon, defeating these nasties adds to your Ancient Essence count (with some yielding more Essence than others). Players need an Essence count of 40 to finally enter the boss's chamber.


However, this being God Wars Dungeon, you can bypass this requirement with an Ecumenical Key. Plus, the required Essence count is lowered by completing Combat Achievement tiers.


Your Essence count is shown on the Kill Count interface, but it’s hidden until the player has unlocked the Frozen Door. Once you’ve reached (or bypassed) the required Essence, the door opens, and you’re into the outer room of Nex's chamber. We don’t want to reveal too much about the encounter, but let’s just say it’s going to test you!


For those of you already familiar with the encounter in RuneScape, Nex in Old School is largely based on the 2011 boss fight with some modifications and balancing tweaks to fit Old School.


Players who have completed the Hard tier of Combat Achievements can purchase a private instance, but it’s unlikely you’ll want to take on Nex solo – she’s quite the formidable foe. The cost of this instance starts at 150,000 coins, and goes down as you complete higher Combat Achievement tiers.

Defeating Nex equals juicy rewards! These are shared across all players who contribute enough, with higher performing players bagging more loot. The MVP of the kill will also rake in a little extra swag.


All contributing players have a chance of obtaining a unique item. This chance scales based on individual contribution, with a bonus chance for the MVP.


A player’s individual contribution is wiped when they leave the area, but this doesn't impact the contribution of other players. For example, if two players have both made 50% contribution and one of them leaves, the other player remains on 50%.


Nex’s uniques are all new rewards, and they will all be added to the Collection Log. In addition, the usual pet drop will also be added.


Many of you will remember that back in 2011, Nex came with two additional armour sets as well as the Virtus set. We're not opposed to re-introducing these (we feel that Torva could be a particularly good addition to the game), and people have suggested maintaining the price of existing God Wars Dungeon items by combining them with loot from Nex. However, we don't want too many armour sets arriving in a single piece of content, and the Virtus set doesn't exactly have God Wars Dungeon items that would be relevant for combining. Instead, we'd like to offer more armour rewards later in 2022 alongside content themed around a certain ancient god... We hope to update you on some item sink ideas we're exploring in a blog later this year.


So, what are you getting for your blood, sweat and tears? Let’s take a look…


The following rewards will be available to test in an upcoming in-game beta on October 20th! Full details on how to access the beta server will be included in next week's game update newspost when the Beta is live. 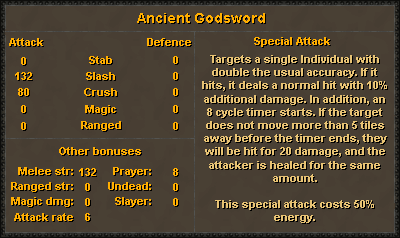 A Melee weapon requiring 75 Attack to wield. The drop is the hilt, and it must be attached in the usual way. The hilt and sword are both tradeable.


The Ancient Godsword has a special attack, Blood Sacrifice, that costs 50% energy. It targets a single individual with double the usual accuracy! If it hits, it deals a normal hit with 10% extra damage. In addition, an eight-cycle timer starts. If the target does not move more than five tiles away before the timer ends, they'll be hit for 20 damage and the attacker will be healed for the same amount. 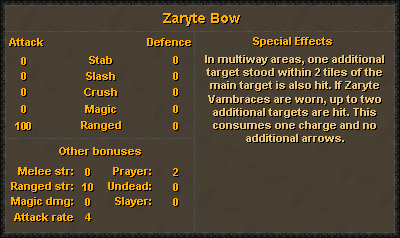 Requiring 80 Ranged, this tradeable, non-degrading bow can fire all arrows up to Dragon. It also has a special effect that uses charges. In multiway areas, an additional target stood within two tiles of the main target is also hit. This doesn't use an additional arrow, and only uses a single charge. The Zaryte Bow can be recharged using Nihil Shards which are dropped by all foes in the prison (including Nex).


Oh, one more thing: if the Zaryte Vambraces (see below) are worn, up to two addition targets are hit. This still only uses a single charge!


We'd also like to share some further images to help illustrate how the Zaryte Bow might affect the current ranged meta. Check out the images below: the first shows the Zaryte Bow's DPS on single targets in comparison to other popular Ranged Weapons. The second image shows DPS calculations when we take into account the DPS on multiple targets, relating to the Zaryte Bow's special effect. 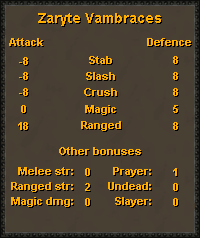 A piece of Ranged Armour requiring 80 Ranged and 50 Defence, the Vambraces are tradeable and do not degrade. See above for the details on how they bolster the impact of your Zaryte Bow. 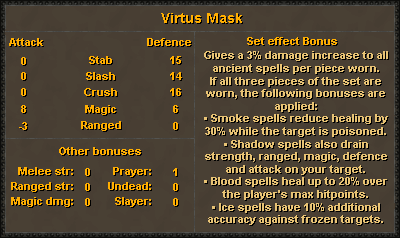 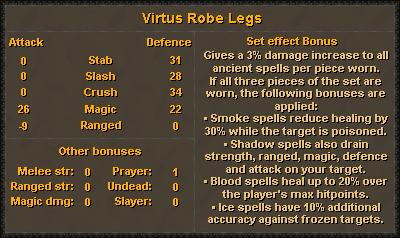 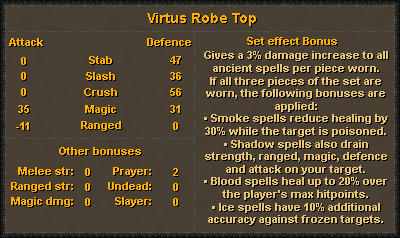 Many of you will remember that back in 2011, Nex came with two additional armour sets alongside the Virtus set. We're not against adding these sets (we feel that Torva in particular would be a good addition to the game). However, we don't want to add too many pieces of armour with a single piece of content. Instead, we'd like to offer more armour rewards later in 2022 alongside another piece of content themed around a certain ancient god...


Virtus is a Magic Armour set consisting of the Mask, Top and Legs – all requiring 75 Defence and 80 Magic. All three pieces are tradeable and do not degrade.


Each item gives a 3% damage increase to all ancient spells (so 9% if all three are worn). Plus, if you’re wearing the whole set, Smoke spells reduce healing by 30% while the target is poisoned, and Shadow spells also drain Strength, Ranged, Magic and Defence as well as Attack.


Additionally, wear all three and Blood spells can heal up to 20% over the player's max HP, while Ice spells have 10% additional accuracy against frozen targets!

These consumables are dropped by all foes in the Ancient Prison – including Nex. They can be used to charge the Zaryte Bow, or they can be crushed to make Nihil dust, which is a secondary ingredient in new Ancient Brew potions.


An Ancient Brew is a combination of Nihil dust and a Dwarf Weed potion, and requires 85 Herblore to make, giving 190 Herblore XP. When drunk, this primordial concoction boosts Magic by 5% +2 and restores Prayer by 10% +2 with the ability to boost up to 5% over the player’s base Prayer level. However, it also drains Attack, Strength and Defence by 10% +2, so think before you drink.

Gather 50 of these for one Ecumenical Key. Please note that you can't convert the Shards to a Key if you already have the cap on Keys.

That’s not all – every foe in the prison apart from Nex herself has a chance of dropping a piece of the iconic Ancient Ceremonial Robes set! This set consists of a mask, top, legs, gloves and boots. They have the same stats as Monk Robes and will be added to the Collection Log. If you're familiar with Nex from old, note that wearing them no longer allows players to bypass the Essence Count required to take on Nex herself.

That's everything for this blog. Remember, you'll have the opportunity to test out these rewards on October 20th. We'd love to hear your feedback so please do...