We’ve been somewhat quiet since the Android beta came and went last month. That isn’t to say that we haven’t been hard at work! This newspost will offer insight into how the beta testing went, what we’ve been up to since then, and what you can expect from us going forwards.

In February we opened Old School Mobile up to you, the players, for the first time. 2,000 of you took part in the testing and since then we’ve been tirelessly analysing performance data, scrutinising the feedback and engagement metrics to verify our assumptions about the state of the current mobile client. All of this allowed us to confirm that the next steps we want to take are the right ones.

The Android Limited Beta feedback made one thing clear. Even in its current state, the players who tested it felt that it was great. We surveyed the testers and the overwhelming consensus was that it was responsive, the control mechanics are suitable, and the application mostly meets your expectations. It isn’t particularly surprising to us that existing players are happy with the utility of mobile. Rather pointedly, the players who have been able to try Mobile so far have been quite adept at the game, and so are very good at learning how to operate it. Any criticisms of Mobile centered on the usability of certain features, which we'll cover late in the blog. Whilst the testers were generally happy, there's still significant work to be done in making Mobile more intuitive for inexperienced players too. So, rather than rest on our laurels, we’re paying particular attention to what players felt needed improvement. Here’s what we’re going to be doing next.

As mentioned above, the data and the feedback we've received so far suggests that we need to make improvements to the usability of certain in-game features. We’re constantly discovering more areas of the game which would benefit from improvements to make it easier to use. We've detailed a few of the changes we're looking to make in the sections below. We’ll continue to seek your feedback and input to ensure any such improvements are the right ones. The changes will only impact the Mobile version of the game so as not to impact the integrity of existing content. Though, should there be demand for it, we're open to polling such features for desktop.

The ease of which you can withdraw and deposit from the bank can significantly impact how much you enjoy a game session, it’s a critical game function that needs to operate intuitively. Currently, withdrawing or depositing more than one of an item requires use of the right-click context menu, which can be tedious on a touch interface. To improve this experience, we’re removing the reliance on the context menu and implementing some buttons on the main bank interface that allow you to set a default withdraw and deposit amount when you left-click or tap. This functionality will also be added to shops so you can buy or sell up to 50 of an item per click or tap without using menus at all. 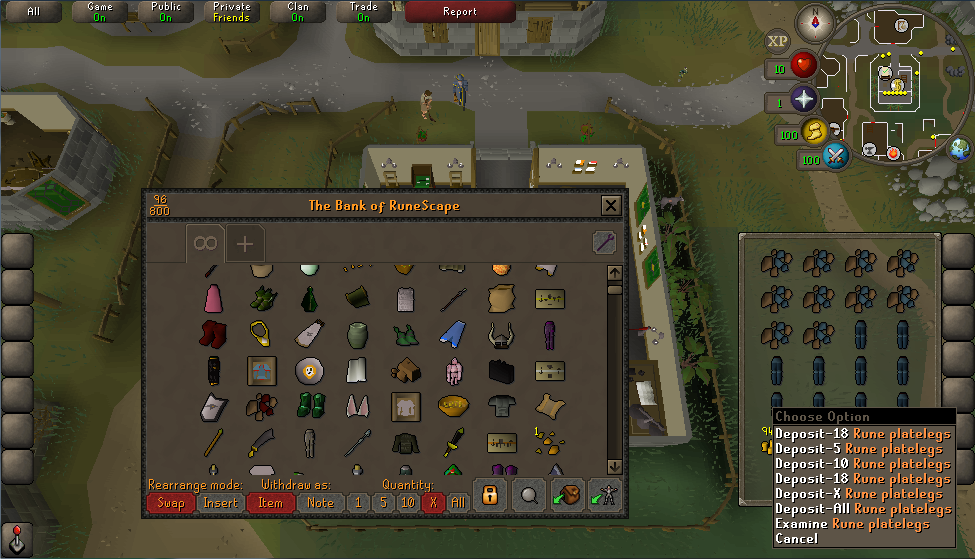 In the above image you can see that the Deposit/Withdraw-quantity (detailed above) has been sent to 18 via the X option. 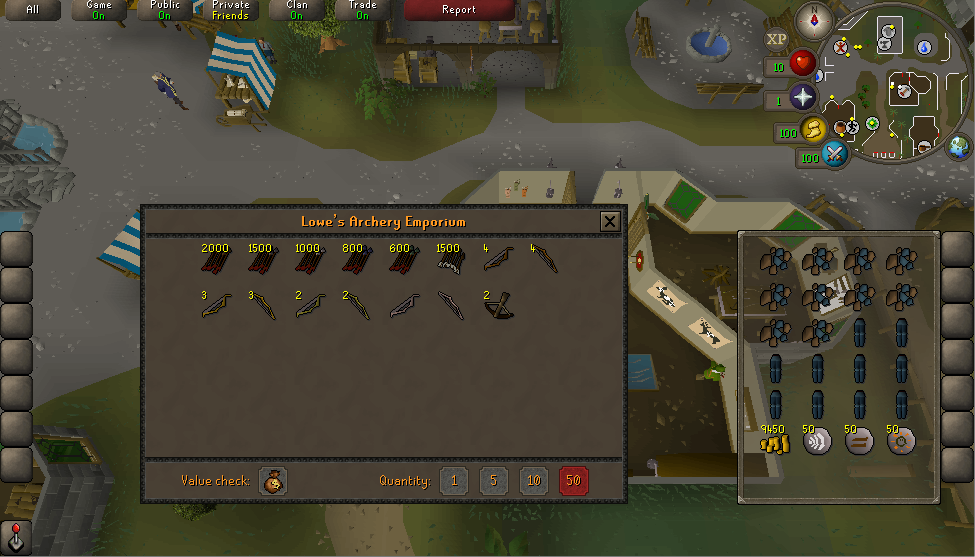 The Spellbook interfaces currently list spells very close together. Whilst this isn’t much of an issue on the desktop client where you have the accuracy of the mouse cursor, on a small screen touch device it’s another story as your finger has a strong chance of tapping multiple spells at once. We’ll be looking at how best to address this issue very soon but because it’s a top-level interface component, any solution we develop may impact usability within the desktop client too. We’d like to reiterate the above statement, that any change will be with your feedback and input to ensure that only the right changes are made.

Many of you requested the ability to customise the UI layout on mobile. Unfortunately, this would be an immensely time-consuming undertaking for both content and tech teams to attempt. Based on the current usability scores, we feel it won’t be the most valuable use of our resources and won’t be taking on the task at this time.

The feedback from the testers highlighted one common trend. Logging in wasn’t the smoothest thing to do. Typing your password every time to login on Mobile is tedious and many of you feel your phones are secure enough to not require it. So, we’re overhauling login to do exactly that! You will be authenticated for 30 days when you log in on your device, and the authentication renews every login, so if you always login to mobile at least once per month you’ll never have to enter your password again. Simply open the app, tap Login and you’re in!

Our brilliant Tech Services team have been working on this for quite some time. This will also feature alongside in-app account recovery, account creation, and payments and we’re now starting to integrate the features into the game client. The login and logout flows are complex and encompass various conditions, such as requiring authentication if your password ever changes, and we’ll talk in more detail about how exactly login will work on mobile as the features approach release.

Shift-click drop on desktop has become a core function of efficient gameplay since its release in 2017 and we know you want that functionality available in some way on Mobile. So, we’re currently developing a ‘Drop mode’ for the inventory, available from the quick-function menu on mobile. You’ll be able to set ‘Drop mode’ with a single tap from the top-level interface to make the default option for your items ‘Drop’. Simply ‘Drop’ what you wanted to and switch ‘Drop mode’ off with another single tap!

Mobile brings a totally new user input control system, and whilst we’re still refining exactly what gestures and controls perform what actions, this information isn’t easy to find. So, we’ll be implementing a controls tutorial, available on demand for those on Mobile to see a demonstration of exactly how to control the game on mobile devices.

Tooltips aren’t used by everyone but they do provide very useful information across the game, from displaying your XP to the next level in the skills interface to explaining what a prayer can do. Currently tooltips are only visible when hovering your mouse over the game element that generates it which obviously isn’t useful on a touch screen where you don’t have a mouse. We’re still looking at the best options to replicate tooltip functionality on Mobile but it’s certainly something we’ll be including before launch.

Knowing what action you’ve just initiated is generally considered good user experience. Desktop does this by displaying a red or yellow ‘X’ when interacting with the game world and displaying the action you’re about to perform when hovering over items and NPCs. Neither of these features are suitable on a touch screen device as the X is too small to see behind a finger and the action information has been removed, but we’ll be working on a way for the game to provide this valuable interaction feedback to you on Mobile very soon.

During April we’ll be operating a limited iOS beta for which the primary focus is to obtain further usability feedback and real-world performance data on Apple devices. Secondly, this beta will be a test for us and we’ll be identifying any potential issues with operating on the iOS platform.

Our intention is to operate the iOS beta from the 13th April, with the cross-platform beta shortly after. We had initially intended for this beta release to be in March, but unfortunately there were issues we had to resolve which prevented us from making this a reality. The beta will be larger in scale than the Android beta, final confirmation of the numbers involved will come when we send invitations.

A central resource containing all-things Mobile is well overdue. Before the iOS beta is made live we’ll be publishing a Mobile FAQ which will be accessible from the OSRS homepage. This will be the home for all news Mobile.

Following the iOS beta, if all goes well, we’re intending to operate a third limited beta across both Android and iOS platforms simultaneously. This beta is to primarily help us identify any operational issues with such a release, as this will of course become the standard process with future releases.

Depending upon the results of the next limited releases, we’re aiming to open Mobile up to existing players soon after and leave it open to as many as of you as we can. This will mark the start of the true beta phase, where we’ll be maintaining the live service on mobile and desktop through game updates. During this phase, we’ll be integrating some major features such as the login overhaul and continuously collecting feedback from you, helping us iterate upon the mobile experience with the ultimate aim of reaching a release-ready experience.

We can't do this without you, so if you're yet to register your interest in the beta then do so now! Please do note that it will not be possible to register a new device to be considered for participation in the two limited betas detailed above.

Friday 13th April: iOS beta will be made live.

Monday 16th April: Survey will be sent to those participating in the beta.

We do not anticipate any deviation from the above dates, although these may change due to complexities of the development schedule for Mobile.