Last year during the RuneFest 2017 Old School RuneScape reveals we released a blog further detailing the reveal of Dragon Slayer II. It was extremely well received, so we've decided to do it again for this year's reveals! In this blog you can find detail on the Kebos Lowlands in particular.

For information regarding the other reveals, you can find more in the Warding blog and the Song of the Elves blog.

Since Xeric's Age of Strife, armies of his Lizardmen have attempted to reclaim Great Kourend in honour of their former ruler. These Lizardmen make their home in the Kebos Lowlands to the west of Kourend. The Lizardmen will defend their home ruthlessly and as such the Kebos Lowlands can be very dangerous to humans. However, those who are willing to enter will find a land of many opportunities. 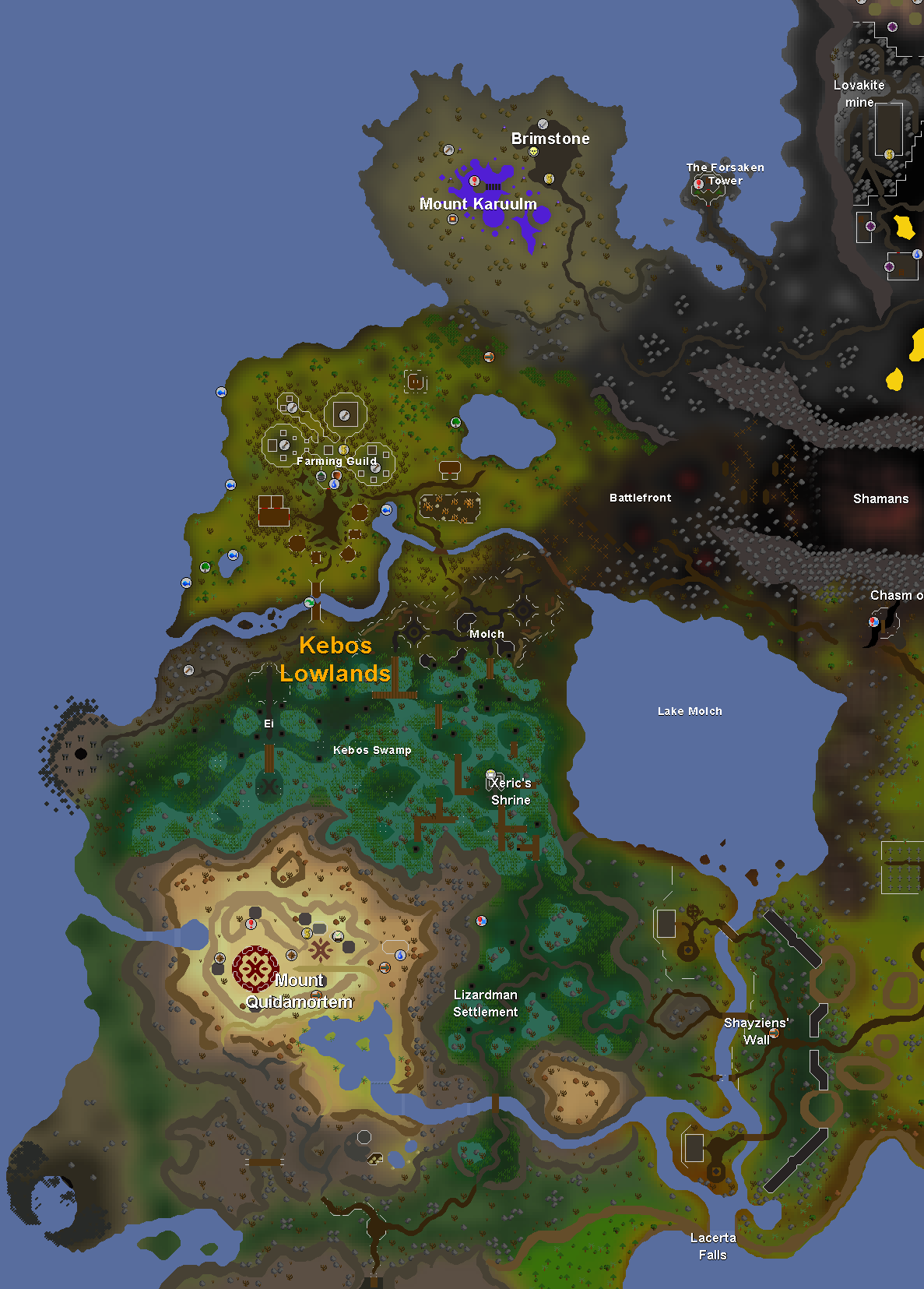 The land deep within the Kebos Lowlands is home to soil more fertile than anywhere else on Gielinor. Land this fertile is highly appealing to members of Hosidius house, even with the threat of the Lizardmen. Following an agreement between Lord Hosidius and Lord Shayzien, a detachment of Shayzien soldiers has been assigned to protect the area. This has allowed Hosidius house to build and maintain a guild where farmers can experiment and master their craft.

On the northern edge of the Kebos Lowlands lies the Sulphur Volcano of Mount Karuulm. Here, the Tasakaal, masters of life and death, make their home. Within the shadow of this volcano lies Brimstone, home to the Kahlith. These beings were once human, but they have abandoned their previous lives in the name of the Tasakaal. Together, the Tasakaal and the Kahlith work together to maintain the balance between life and death. Assist them, and you might just be rewarded.

In the middle of Lake Molch is a small island home to Nicolas Louchart, a peculiar fishing person with a very different approach to catching.

Nicolas uses birds, specifically Cormorants to catch and return fish and salamanders that take residence in the nearby waters. Similar to Falconry when training Hunter, the player equips the bird on their arm. When clicking a fishing pool, the bird swoops down and returns to the player with the catch. If the player's inventory is full, the bird swallows the catch and doesn't award any experience to the player. The player must have both hands free to wield the bird.

The Taskmaster for this diary will be found in the courtyard of Kourend Castle (a teleport to him will be added to the Diary Cape).

For thousands of years, the Wintertodt has remained safely sealed behind the great Doors of Dinh. Alas, despite the best attempts of the Lovakengj smiths and the Arceuus mages, the doors are failing. Only Dinh himself knew the secrets behind the creation of these doors. Without his knowledge, there may be nothing to stop the Wintertodt escaping and bringing ruin upon Kourend. It is up to you to recover this knowledge.

The Forsaken Tower is a brand-new novice quest that further develops on the story of the houses of Kourend. The quest can be started by speaking to Lady Vulcana Lovakengj in Lovakengj House.

The Ascent of Arceuus

A long time ago, the citizens of Arceuus house gave up their human bodies and claimed immortality. This event was known as the Ascent of Arceuus and it marked the end of death within Arceuus house. Or so they believed. For the first time in a thousand years, a member of Arceuus house has fallen. You will need to solve the mystery of this death. However, time is of the essence and the fate of Arceuus house lies in your hands.

The Ascent of Arceuus is a brand-new novice quest that further develops on the story of the houses of Kourend. The quest can be started by speaking to Mori in Arceuus House.

We intend to poll the Kebos Lowlands and all of the detail contained within this section of the blog shortly after RuneFest ends. Please make sure you have expanded the various sections to see all of the information in the blog. Your feedback is invaluable to us, and as such we invite you to be vocal about sharing it with us. Your comments will help us finalise the Kebos Lowlands design before posting the finalised poll blog. Use #OSRSReveals on Twitter, comment on our official forums, the community-led 2007Scape Reddit, or the community-led OSRS Discord in the #gameupdate channel.


Click here to return to the top of the page.