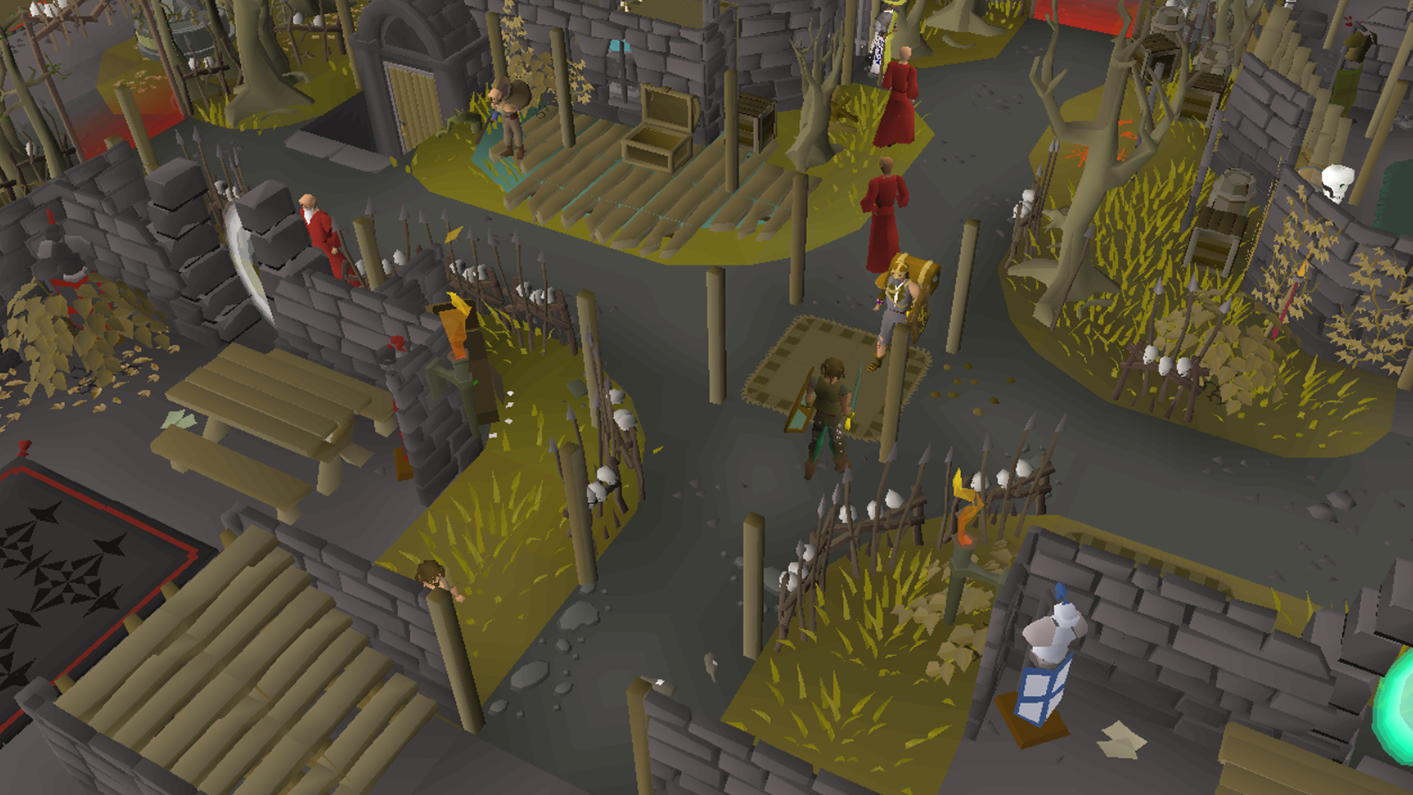 Quick note before we start on this one – we refer to in-game timings as ‘cycles’. Each cycle is equal to 0.6 seconds, and is also known as a ‘tick’.


So, on the subject of timing, we’re testing out some changes to the PJ Timer! For those unfamiliar, this mechanic is a grace period of 16 cycles (9.6 seconds) that begins when a player attacks something and prevents them from being hit by a player opponent or aggressive monster until the timer runs out.


With this Beta, the PJ Timer will be active in all single-way and single-plus areas of the Wilderness. So, if Player A has just finished PvP combat with Player B, Player C won’t be able to attack them for 16 cycles.


Another change is that NPCs will now respect the PJ Timer – so if Player A is engaging in PvP combat with Player B, NPCs won’t be able to get in on the action until the PJ Timer runs down.


Some activities will be prevented during combat, including the duration of the PJ Timer:


You'll be able to join the Beta from the following worlds, which are highlighted in blue on the World Selection screen:


Choosing any of these worlds will load a separate profile to the one on your main account. Once you log in, you’ll find yourself in Ferox Enclave, with max skills and suitable PvP gear. If you want to try out some other equipment or stats before jumping in, head to the rooms next to the Castle Wars and Free-For-All portals and have a rummage in the Supply Chests on the tables. Please do experiment with lots of different gear and stat combinations!


Alright, you’re free to go – so go on, jump in and let us know what you think!


We want to extend a big thanks to everyone taking part in the Android Beta. Signups have now closed, but due to the fantastic feedback from all those involved we're pleased to say that we’re sending a second round of invites out!


Only those with approved access to the Beta client can participate. Even if your app says you're in the Beta, if you've not received an Inbox message from us then unfortunately you do not have access. We will ONLY message players on this subject via their Inbox.


We’ll be using the official OSRS Discord server’s Mobile Beta channels for all communications during the Beta. Accordingly, we’ll be updating the server with all the info you need to get started, including an FAQ and a list of any known issues. You’ll get an invite to the requisite channels, which will be hidden for everyone else. If you don’t see them straight away, be patient – it takes a while for the permissions to kick in. If you still don’t have access after 24 hours, let us know by sending a message to Mod Light#1353 on Discord and we’ll sort it out.


Lastly, please remember that you need an Android device updated to at least 8.0 (Oreo) to participate. If you’re an iOS player, stay tuned for another Beta currently aiming for early 2022.


After investigating, we’ve decided to reset all times for the Hallowed Sepulchre – both World and Personal. This is because we’ve become aware of certain players acquiring impossible Personal Best times, as low as 0.6 seconds. While first looking into the issue we determined this was due to a bug, fixed it, and reset any times that were obviously caused by bug abuse.


However, the problem was not resolved, so we went back to the drawing board. Unfortunately, our second fix disabled Fletching in the Sepulchre, which wasn’t optimal – and to make matters worse, new, only marginally less suspicious records were popping up all the time. Although these new records weren’t obviously caused by bug abuse, the timing so soon after the reset and the substantial gap between these times and the former bests made us question their legitimacy. As such, the integrity of these times will always be in question.


So, next week, we’ll be doing a full reset of the Hallowed Sepulchre Records. Since we can’t be 100% sure that the suspicious times were set by bug abuse, we can’t take action against individual accounts, and after speaking with the speedrunning community it was generally agreed that a full reset was the right way to preserve the integrity of their achievements.


We’d like to apologise to any players who have legitimate record times and are affected by this change.

We’ve changed the prefixes for Group Chat and Guest Clan Chat, as sentences that began with ‘I’ were erroneously being diverted to the Group Ironman Chat. The new commands are as follows:


We’ve made a few more changes to various chats, too:


On November 4th we pitched some changes intended to keep the game’s economy healthy. We’ve already implemented the Bank Space expansion and the literal Golden Sink, and today we’d like to update you on our plans for the small tax on Grand Exchange transactions.


If you missed it, the basic idea is that by charging a small fee for each transaction we’ll reduce the amount of gold circulating in the game. Furthermore, this change can help address the rate at which the quantity of prestigious items in the game increases; at present, many more items come into the game via drops than there are players to use them, so the items rapidly lose value. With the tax update, when an item’s owner puts up a Sell offer, the game itself might buy and delete the item, paying the seller with some of the gold taken in taxes.


Originally, we pitched a flat tax rate of 2%. While that’s considerably lower than the rate other games use in their auction houses, we’ve seen feedback raising concerns about the impact it would have on player behaviour. While we don’t mind players doing more direct player-to-player trading to avoid the tax – some feel that Old School lost precious community engagement when the Grand Exchange entered the game – we’d still prefer not to push players back to the dark days of spamming ‘wave2: buying raw lobs 200 each’ outside every Bank in Gielinor.


We’ve therefore agreed to lower the initial tax rate to 1% and to cap the tax on any given item at 5 million coins.


Let’s see how that works in practice.


Ram0ceanFan is selling 100 Cooked Shark for 975 GP each and is matched against a buyer offering the same amount.

The 1% fee charged for each item is 9.75 coins, which the game rounds down to 9 coins per Shark.


OlmRaider73 is selling a Twisted Bow for 870,000,000 GP and is matched against a buyer offering the same amount.

If OlmRaider73 preferred to spend time finding a buyer for a direct player-to-player trade, rather than spending that 5,000,000 fee, that’s totally fair.


Newb5caper is selling 100 Guam Leaves for 29 GP each and is matched against a buyer offering the same amount.

The 1% fee charged for each item rounds down to zero.

The Grand Exchange menus will tell you up front how much money you can expect when you set up your Sell offer – so you don’t have to do all this maths yourself. If your buyer is generous enough to pay more than you asked, you’ll receive more money, and perhaps pay slightly more in fees, but overall you’ll still get at least as much money as the menus told you to expect.


We’ve also agreed to exclude some items from the tax altogether. Most of these are tools used by new players, since we’d prefer not to inhibit trade on essential items. Bonds are also exempt from the tax, since they already charge a fee when they’re converted from non-tradeable to tradeable. The Grand Exchange menus will clarify which items have fees.


Now, let’s go back to that point about the game buying high-value items from players using your taxes. Which items are eligible to be sunk? We’ve seen some great player suggestions, including rewards from the Theatre of Blood, other bosses, skilling, and even Treasure Trails. While we agree that these would all benefit from a reduced supply, we want to start small. A shorter list will let us monitor the amount of money actually being sunk and any player behaviour changes that arise from the tax before committing to a more extensive (and expensive) list of items to buy out from the game.


Aside from feedback on the update itself, we’ve seen players raising concerns that they might be tricked by scammers switching rapidly while setting up a direct player-to-player trade. To address this, we’re offering a change to the Trade menus, preventing the ‘Accept’ button from being pushed for a few seconds after the other player changes the items, giving you a better chance of spotting the change.


You can opt out of this delay though, if you really need to trade faster – which players rely on in some PvM situations, for example – or if you’re confident taking the risk.


This project is making its way through development now, and we hope to launch on December 8th.