This week sees the last of Poll #69, an update on BH rewards, and a new welcome screen.

Players can now unlock the "Explore" emote for completing 600 Beginner clue scrolls. If you have met these requirements already, you will need to open one more Beginner clue casket to unlock the emote.

Back when we were first testing Bounty Hunter Rework, we added the Rune Pouch and the Looting Bag to Slayer Masters' Reward Shops to ensure they were still obtainable. We have done the same on this occasion, and taken the opportunity to make other items available via PvP activities.

Since Bounty Hunter is now inaccessible until its re-release, we have made the following rewards available elsewhere:
We will be monitoring the Last Man Standing store to ensure that these prices are fair.

Welcome Screen
Back in September, we tested out an updated welcome screen layout which replaced redundant information and dead space with information about the game's content. We’re pleased to announce that it went very well, and we’ll be rolling it out for everyone this week. If you’d prefer to see the old layout instead, we have placed a "Switch Style" button in the top left corner of the screen which toggles the new layout on and off. 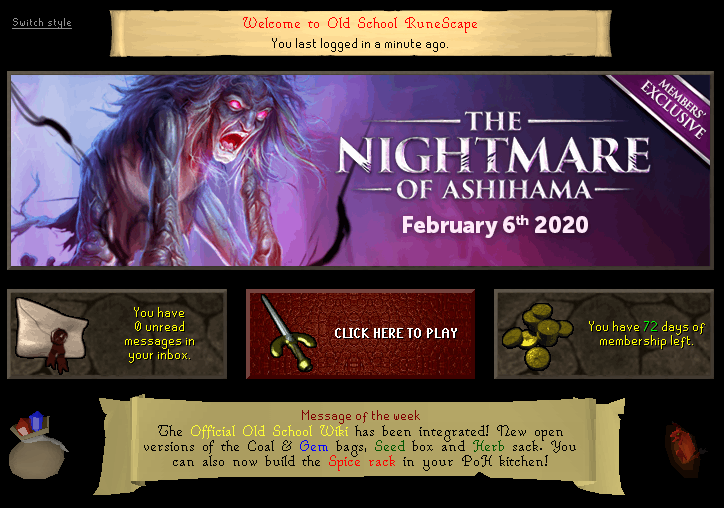 In Other News
While Bounty Hunter is on hiatus, the Bounty Hunter world will become a PvP world. This means worlds 324 and 325 will both be PvP worlds simultaneously. We're also making the following changes to all PvP worlds:
These changes may be tweaked or even reverted if they don't improve the PvP experience.
Other Changes