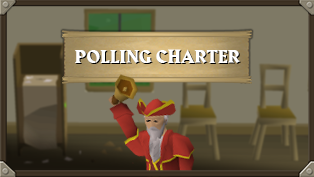 This is the Old School RuneScape Poll Charter – an official rulebook that standardises what does and doesn’t go to a poll. The aim of this charter is to provide clarity and a better understanding of the polling system, especially regarding unpolled changes.


What We Will Poll


Changes to existing content which will have a significant impact on players, such as:


What We Won't Poll


This does not include things like Ultimate Iron Man or Iron Man mode, which we classify as new content. For the same reasons, we will poll any rewards from alternate game modes which might cross into the main game.


In-game visuals can often become a sticking point which holds back new content from being released into the game while the ‘preferred’ design is discussed. It’s a time-consuming process which still leaves huge portions of the community dissatisfied.


The key change here is that items will no longer be dependent on their aesthetics to make it into the game. We’ll still poll rewards and changes to those rewards, as discussed above, but we won’t be polling their appearance.


Please note that we want to ensure that we’re not moving away from what makes Old School ‘Old School’ – as you can see from the team’s recent work, we’re committed to hold onto what makes the game feel so special.


We’ll continue to share example imagery from early on in the process, and we will make changes based on your feedback, as we do now. We believe that giving the community ample time to leave feedback will help direct the changes we make, but the actual changes made will no longer be subject to polls.


We want to make a special note regarding UI and Graphical Enhancements – these changes, in particular, can impact those who aren’t even playing the game yet, so they’re absolutely essential for the long-term health of Old School RuneScape. For example, the changes we made to the mobile client have made it more accessible and user-friendly, which will benefit players old and new. We’re also aware that people are interested in a Jagex-made HD version of the game, which would bring players who don’t enjoy the nostalgic, low-poly version into our community.


Hopefully this one should be self-explanatory, as we already fix almost all bugs without a poll anyway! Just to be sure, here are a few specific examples of things we wouldn’t poll:

Graphical bugs, such as:

In-game bugs, such as:


Small QoL enhancements, such as:


Future changes to the polling system


Our polling system needs to be flexible so we can alter it to remain current with the community’s needs – much as we’re doing now!


We’ll always discuss which changes we intend to make, and why.


The aim with changes like these is to protect Old School RuneScape, keeping the game fun and fair for its players. Realistically, that sometimes means doing things that wouldn’t get majority support in a poll, such as:


Over the last year or so we’ve put a lot of effort into reviewing where fresh players drop out while playing Old School RuneScape and addressing the hurdles that put them off. This activity doesn’t disrupt the game for anyone else.


This content is not suitable for polling – after all, the target audience of new players aren’t even able to vote. Furthermore, we need to tweak these systems regularly to make sure they keep up with new-player pain points; this content cannot realistically be subjected to a week-long survey of players who probably haven’t seen it in the first place!


Pricing changes to both Membership and Bonds


The studio relies on these to function as a business. We've faced rising development costs, inflationary rises across the globe, and fluctuations between international currencies.


We need the ability to change prices as required, and so these won't be subject to polls.


Accessibility and diversity changes, including:


We get sent a lot of requests, most of which are very small. Examples include:


We normally pass these without a poll, as they’re just too quick to require one. For the most part, we feel this should continue. Whenever players have had significant objections to minimal changes after they’ve gone live, we’ve been able to revert them without fuss or disruption.