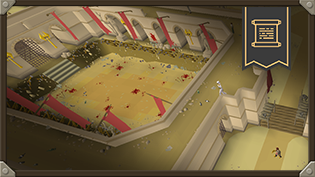 Get ready to test out the PvP Arena before the full launch next week! 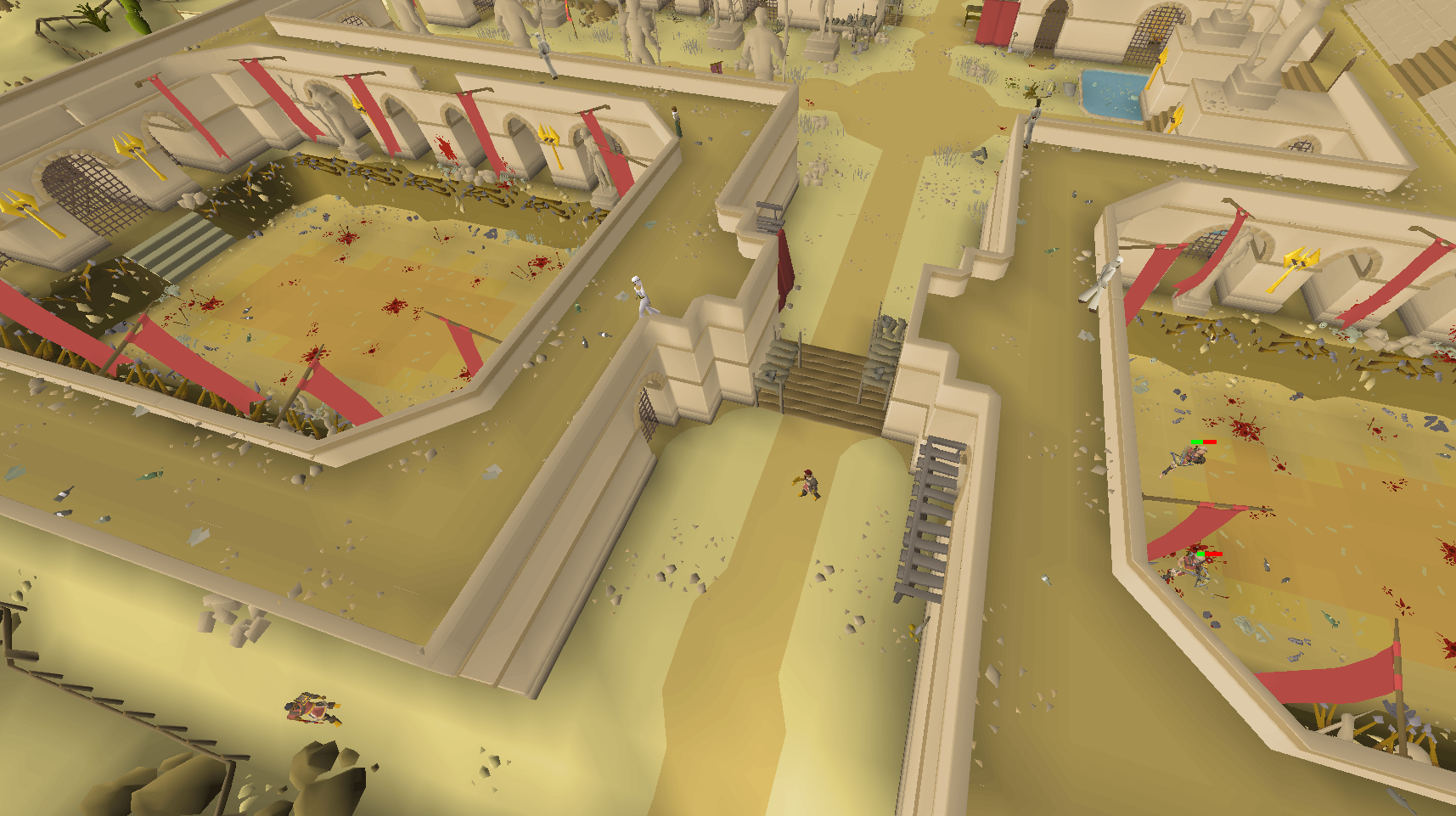 The PvP Arena is coming next week! Before we throw open the gates, however, we want to ensure that all the systems we’ve put in place are working as they should, so we’re kicking things off with a soft launch.


Participants will be able to earn Rank and Reward Points, but please note that these will be wiped at the end of the soft launch period, one week from now, to ensure that everyone gets a fair start when the Arena opens for real. For now, let’s take a look at exactly what you can access with today’s update.


You’ll be able to find opponents and set up matches in the same place you did in the Duel Arena. You’ll also notice a couple of new NPCs who will help you navigate all your new options. The 1v1 Tournament Guide will, of course, tell you all you need to know about the 1v1 Tournaments. If you fancy a one-off fight, however, then you’ll want a word with the Duel Guide. 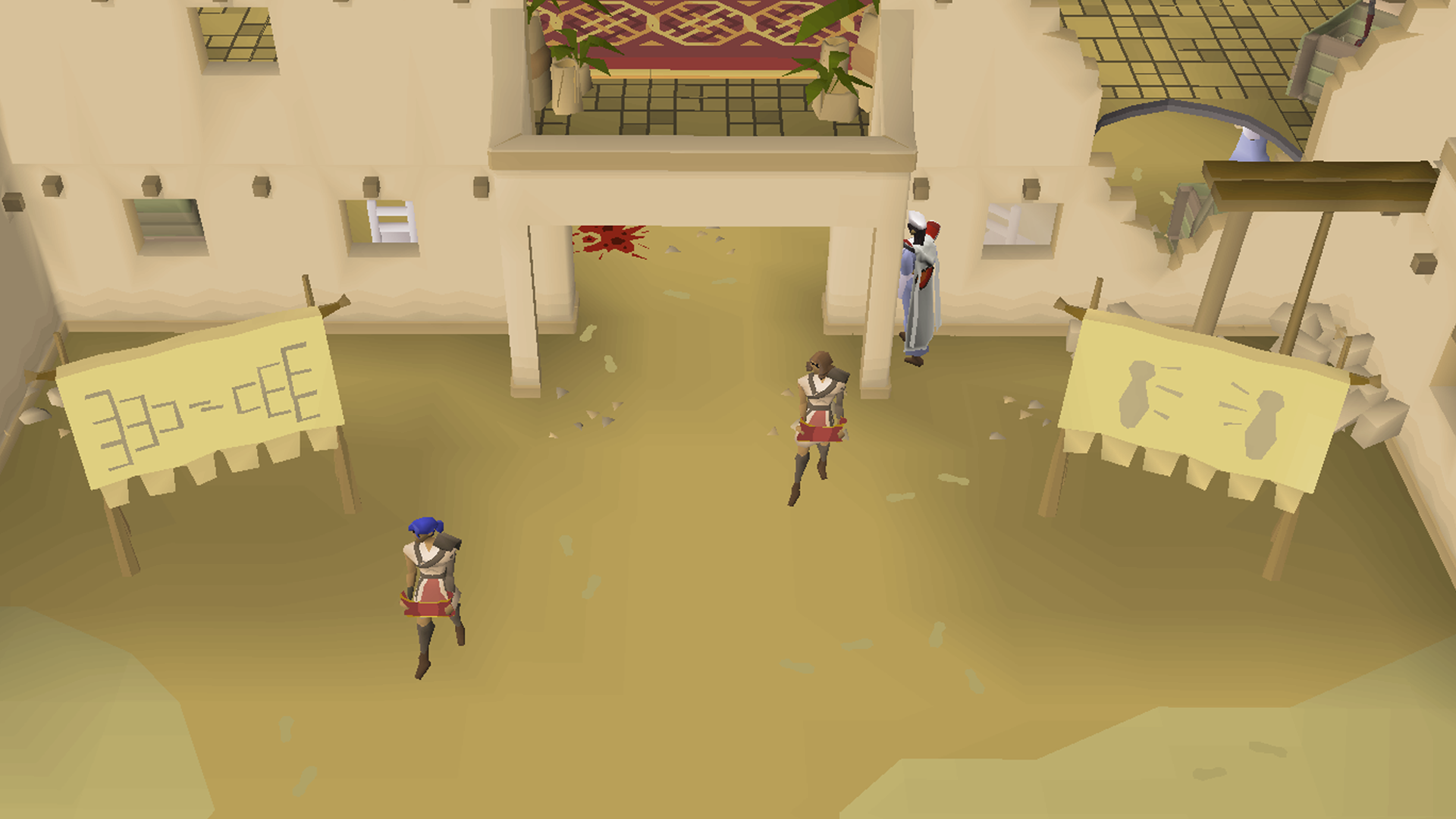 
To sign up for a fight, you’ll need to check out the notice boards. Here, you can find a match or host your own tournaments – and if you’re on a dedicated PvP Arena World and know the name of one of the combatants, you can watch their fight from here, too.


The Emir desires that combatants face opponents of equal strength in a fair, controlled environment. When you sign up for a fight, you’ll be matched with players of a similar skill level using an alternative save game.


This system lets you get on with whatever other activities on any world you like while your match is being prepared, so don't worry about waiting around! Once the match is ready, you’ll receive a notification that it’s time to fight! You’ll be prompted to swap to the alternative save game world, giving you enough time to get to a safe place before you hop worlds and start the battle.


Because fights take place on an alternative save game world, your standard game profile is left behind along with all your levels and items.


Beside the Chat, Clan Chat, and Group Iron side-panels, you’ll spot the Grouping side-panel. We originally created this in 2014 to help players find groups for minigames, but it now includes an extra PvP Arena button. Click this, and you’ll open a new panel for… the PvP Arena! Who would have guessed? 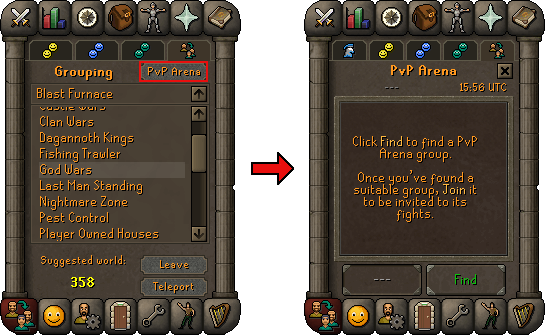 
From here you can register for either a 1v1 Tournament or 1v1 Battle where the game decides who you fight against. Alternatively, you can join a manually created 1v1 Tournament.


Within this menu or whilst or on the PvP Grouping Panel, the Options button will allow you to adjust your preferred fight locations between US, UK or Australia. This will help to find matches within you preferred region, although this will not always be guranteed, dependent on the amount of players searching for matches. 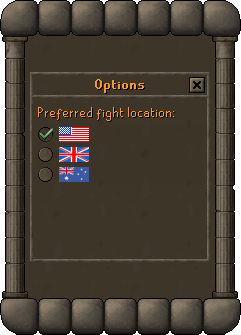 Please note: US is the default setting for your preferred fight location.


To succeed in the Arena, you'll need to adapt your playstyle and master multiple builds based on what the audience craves the most. The crowds aren't easy to please, however, as their tastes change on a weekly basis.


Each week you'll be required to use one of the following builds:

The Equipment tab will appear when you attempt to join a PvP Arena match, and is used to select which items you intend to fight with. Currently, there are around 400 items to choose from. You can only use equipment you have the stats for, so pay close attention to which build is currently in rotation!


You’ll also be able to use the following bits of equipment, which are only available in the Arena:


When the fight is complete, you’ll be returned to where you left off on your usual save. If you managed to defeat your opponent, you’ll also be rewarded with Rank and Reward Points.


If you lose your match, you’ll also lose some Rank Points. The Rank system works just like it does in the Burthorpe Games Room, where your loss/gain depends on your opponent’s Rank. Beating a higher-ranked player will reward you with more points.


You’ll also get more points for consecutive wins. The idea here is that skilled players will be able to gain high Rank quickly, so they can start fighting opponents their own size sooner.


Please note that you will not receive Rank or Reward Points when participating in manually organised events. 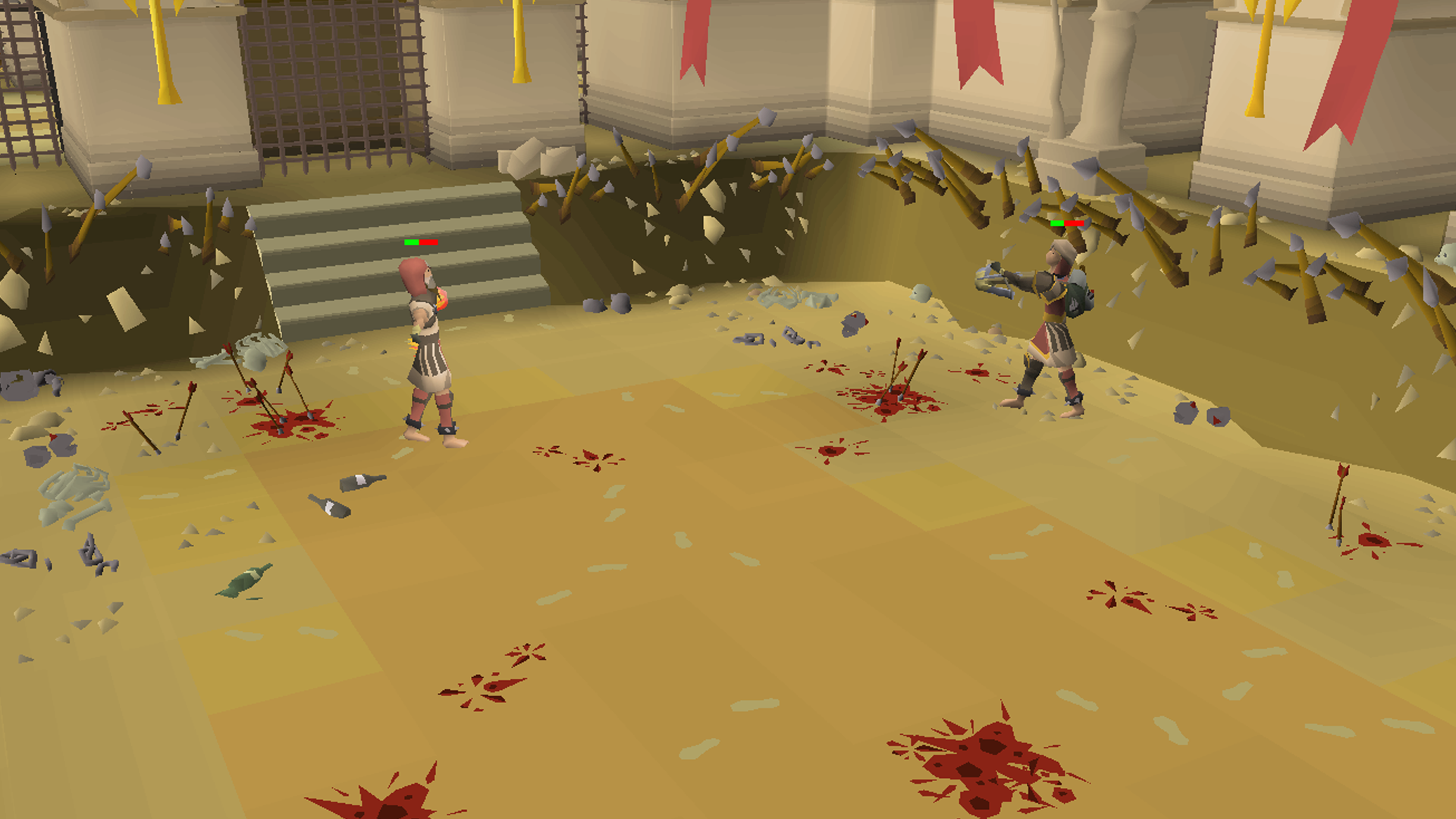 Think you’re ready to go? Well, let’s take a look at your options!


Until now, Tournaments have been exclusive to the Deadman finales, so relatively few players ever get to experience them. With the introduction of the PvP Arena, we’re making Tournament-style play available to everyone!


Tournaments offer a way for players to participate in a series of 1v1 fights in succession - if you're good enough to make it to the next round, that is! You can let the game form a tournament group for you, selected from the pool of available participants, or have a go at organising one of your own!


To enter a Tournament, simply register your interest via the PvP Arena side-panel. Once enough players have signed up, the game will proceed to create a 1v1 Tournament for successful applicants.


Each Tournament consists of anywhere from 4 to 64 players. Each round is split, until there are only two participants left. Here's how this might look for a Tournament of 16 players:


You’ll receive Rank and Reward Points based on how you place – so give it your all!


Fancy creating your own Tournament? Well, you can! Please bear in mind though that participants in manually-created tournaments will not receive rewards – it’s just for fun!


Hungry for battle but don't want to commit to a full Tournament? You’re after Ranked 1v1 Duels! These are one-off battles where the game will automatically pit you against an opponent of similar rank.


Just like tournaments, the winner of a 1v1 Battle will receive Rank and Reward Points.


In Unranked 1v1 duels you’ll choose the opponent you want to fight, mano a mano. You won’t get rewards, but this kind of fight is great for trying out new Combat style combinations, or just getting in some practice ahead of a big Tournament! You can also have unranked duels in non-PvP Arena worlds using your own gear by clicking your opponent's Challenge option while you're both standing in the Arena areas.


That’s all for this week! Like we said, the purpose of the soft launch is to make sure that everything’s running smoothly – so we need you to hop in game and put the PvP Arena through its paces! We’d also love to hear your thoughts on grouping, the available load-outs, or the battles themselves, so feel free to share your feedback through the usual channels.