It's time for our fourth week of QoL month - Miscellaneous! For the final part of QoL month we have gathered a plethora of suggestions that didn't quite fit in the previous weeks! We also will include the proposed sand changes discussed last week.

The schedule for Miscellaneous Week is as follows:

Make sure you head over to the Old School Content Suggestions forum, or Reddit (/r/2007scape/) to share your suggestions for Week 4 - Other changes!  As a quick mention - we are aware of the bug that affected some players shortly after today's update went live, resulting in unwanted combat XP on some accounts. If you were affected by this, make sure to check out this this Tweet and or this forum thread..

Poll Questions
Poll Question #1
Should the Achievement Diary requirement that asks players to complete a round of the Trouble Brewing minigame be changed to only require they enter the lobby instead? The requirements to start Trouble Brewing will not be affected.
Poll Question #2
Should the Quest tab be changed to have a four tab system similar to the player-designed one shown below? This would allow you to switch more easily between the Quest, Achievement Diaries, Minigames and Kourend Favour lists. 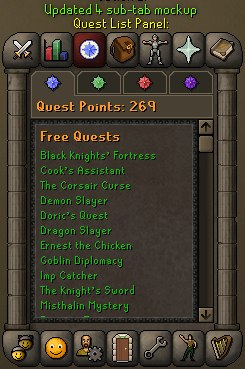 Image provided by GentleTractor. Note: In offering this redesign, we open up the possibility of expanding the interface to include additional ideas and tabs shown in the original suggestion of this redesign. We plan on returning to this suggestion and expanding on it further in the future.
Poll Question #3
Should the right-click "Travel" option on Veos be split into "Great Kourend" and "Land's End", allowing players to travel to each destination more conveniently? Currently it requires going through a dialogue box selection.
Poll Question #4
Should the process of cleaning finds in Varrock museum be streamlined? This would include being able to take more than one rock from the box at a time; the cleaning process being automated (similar to creating vials of potions) for the whole inventory rather than individual; reducing the time it takes to clean each find; and adding a left-click "Take" option for the specimen tables.
Poll Question #5
Should Mystic Robe sets be created for the Grand Exchange? This would allow players to easily buy and sell entire sets of Mystic Robes. They would be separated by colour.
Poll Question #6
Should the number of trades you are able to see in your Grand Exchange history be doubled from 20 to 40?
Poll Question #7
Should the chatbox on Mobile stay open/closed based on your preveious session? Currently it automatically opens each time you log in or change worlds.
Poll Question #8
Should a counter be added to the Brimstone Chest found next to Konar on Mount Karuulm to track how many times you have opened it?
Poll Question #9
Should the restriction requiring players to assemble a Dark totem before being able to receive more pieces be lifted? Currently you must combine your pieces before any more are dropped from creatures in the Catacombs of Kourend.
Poll Question #10
Should players be able to add Blamish oil to the Pearl fishing rod obtained from Alry in Lake Molch to create an equippable Oily fishing rod?
Poll Question #11
Should the Expert Mining Gloves effect of occasionally not depleting a rock apply when mining Amethyst?
Poll Question #12
Should a Black knight kill counter be added after "Wanted!"? Currently, the Quest log shows the White Knight rank but not how many kills you have achieved.
Poll Question #13
Should Saniboch have a right-click "Quick pay" option? Currently players have to go through dialogue to enter the Brimhaven Slayer dungeon. If this question passes, you will also be able to pay automatically by attempting to enter the dungeon if you have enough gold in your inventory.
Poll Question #14
Should players have the option to pay Saniboch a one time fee of 1 million coins to have permanent access to the Brimhaven Slayer dungeon without paying fees in future?
Poll Question #15
Should animations be added for when a player tips arrows, bolts, darts and adding feathers to shafts? These animations would not affect the rate at which you do the actions, and would not prevent movement or other interactions.
Poll Question #16
Should the model for Xeric's talisman be graphically reworked to resemble Xeric's symbol? Currently the model is a recoloured Amulet of manspeak. If this question passes, the mounted version of the talisman in any player's POH would also be updated.
Poll Question #17
Should players be able to use noted Molten glass when giving Oldak supplies to create Dorgesh-kaan spheres?
Poll Question #18
Should the Karamja gloves earned through the Karamja Achievement Diary be graphically updated to match the rest of the Achievement Diary armour set?

Poll Question #19
Should the God spell icons in the standard spellbook be re-coloured to make them more distinct from one another?
Poll Question #20
Should Drew and his machine for breaking down Sandstone into Buckets of sand, as described below, be added into game?

Drew and his machine