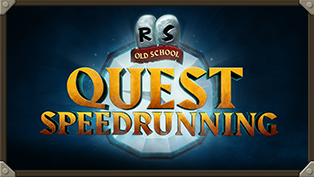 This week’s update sees the launch of Quest Speedrunning!


What was that? A bird? A plane? No, it’s Quest Speedrunning, zooming its way to Old School!


Speedrunning is the art of playing video games as quickly as possible, and the Old School RuneScape community has been doing it unofficially for as long as we can remember.


Soon, you’ll be able to test your speedrunning skills in a brand-new, official game mode, and compete for untradeable cosmetic rewards! 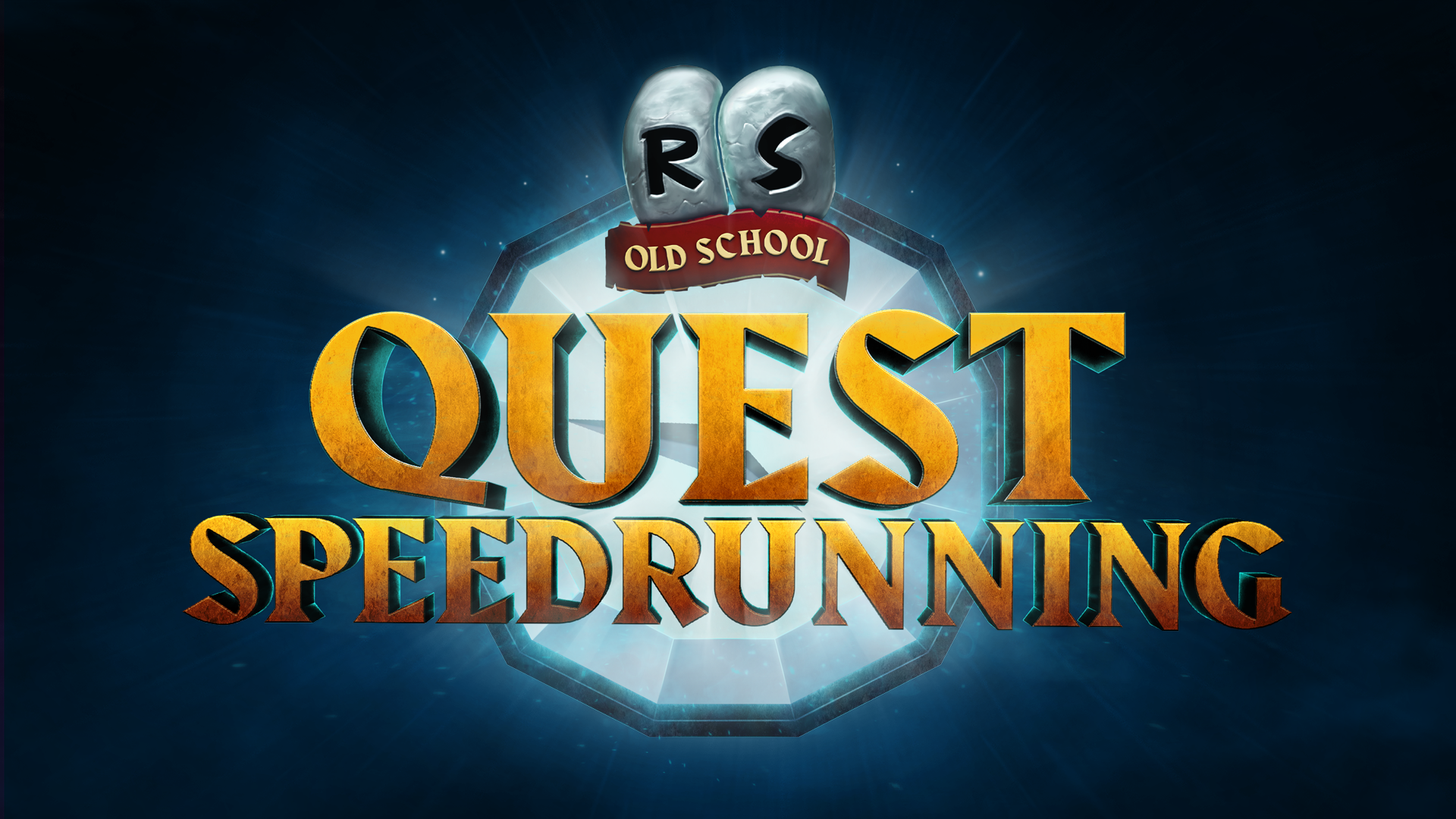 So limber up and keep reading to learn all you need to know before Quest Speedrunning launches on Wednesday 12th at approximately 11:30 BST.


(Why’s the update here early, if the content still launches tomorrow? Well, we wanted to have plenty of time to test all the engine changes we’re releasing alongside this update. As every speedrunner knows, practice makes perfect)!


Here's a quick reminder about the differences between Quest Speedrunning Worlds and regular ones:


In addition, to discourage chicanery, the following rules apply to players on Speedrunning Worlds who are not on a speedrun: 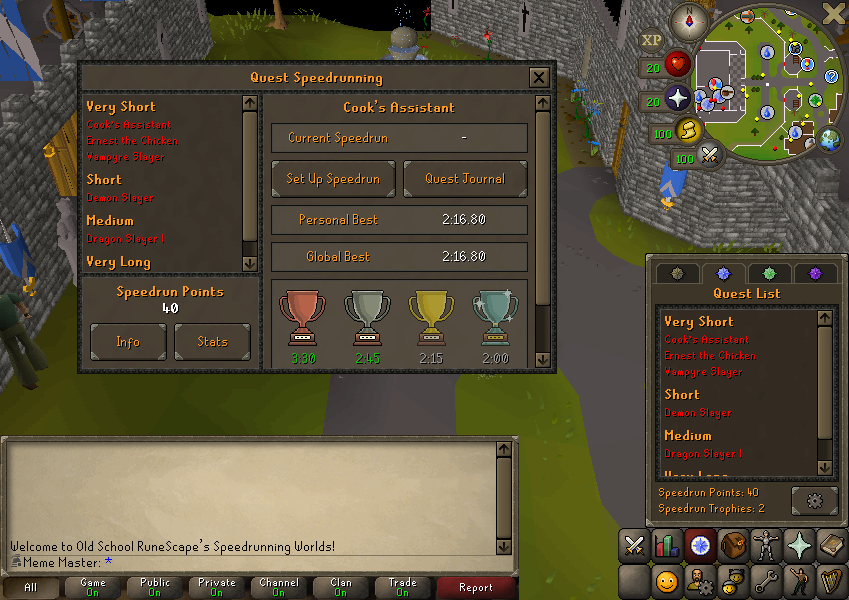 
You'll see the following data for the quest that you’ve selected:


After you’ve made your choice, the game will automatically adjust your stats to the recommended levels for the quest you’ve chosen and provide all the relevant items. This keeps things fair and ensures that everyone starts in the same place.


The race will begin after you speak to the relevant NPC and begin the quest – after that point, the Speedrun Timer will be ticking, and you’ll be conveniently whisked away to the start point of your chosen quest. The timer will automatically stop once the quest is complete or when the speedrun is abandoned, which can be done at any time via the Speedrunning Menu. If things go wrong, you can also cancel your current adventure and start over from that same menu – convenient! Logging out will pause the timer but be aware that doing so will add a couple of seconds to your time to prevent logging out becoming a viable strategy.


Finished Speedrunning and ready for your reward? Head over to the NPC located by the Fountain in Varrock Square to find the Speedrunning Rewards Shop! Since they're all untradeable, you'll be able to reclaim any rewards you purchase should you accidentally lose them.


Rewards from Quest Speedrunning are a real flex, as they can only be obtained by taking part in this game mode. At launch there will be a maximum of 1,600 points available, because there are only five quests to complete.


Let’s take a look at those rewards! 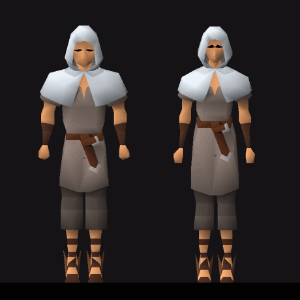 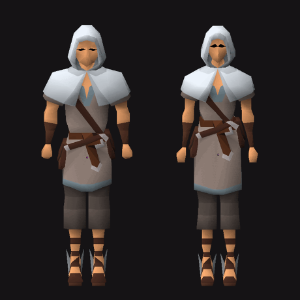 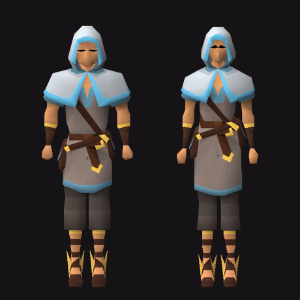 If you’re skilled enough to obtain the Tier 3 Adventurer’s Outfit, you might also be excited to learn that it acts as a Graceful Outfit transmog. Could this be the new meta for Graceful FashionScape? 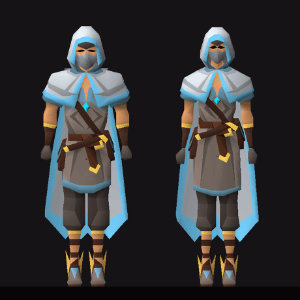 
You can earn four different trophies per quest, ranging from Bronze to Platinum! Earning a trophy for the first time will get you Reward Points – the better the trophy, the more Points you’ll get.


The total Reward Points available for each quest is 320 Points.


But that’s not all – you’ll also unlock your hard-earned trophies as in-game items! They provide no mechanical buffs, but they will show everyone you meet that you’re a Quest Speedrunning champion.


You can only earn a given trophy once, but you can always go back and try to earn a higher-level one! Be aware that you can earn multiple trophies in one speedrun, so if you get the Platinum on your first go, you’ll also unlock Gold, Silver, and Bronze.


The Speedrunning Menu will help you keep track of which trophies you’ve already earned, and the Speedrunning Helper will let you know which time you need to beat to earn your next trophy.


Here the five quests which will be available on launch day:


If the game mode proves to be popular with players, we'll look at expanding the Quest Speedrunner and its rewards. For now, let us know what you think via social media or our official surveys.


Now that we've covered what's coming in the game update, let’s look at the content changes which will be going live on Tuesday October 11th – that’s today! These changes are small but impactful improvements to the main game.


Enjoy 3 for 2 on all Pins on our Official Merch Store this week!

This sale ends October 19th, so make sure to ‘pin’ this to your to-do list!


The PvP Arena is currently using 'Zerker' Loadouts. From Wednesday, the PvP Arena will be using '1 Defence Pure' loadouts in Ranked Duels and Tournaments.