Song of the Elves

This week sees the release of Mod Ed's latest grandmaster quest: Song of the Elves!

Song of the Elves
Congratulations to K 80 for winning the 'Elven Story So Far' video competition!
Spoiler Warning: below is a summary of the elven questline. Our story begins with you, the hero, answering the call to adventure when Edmond, a resident of Ardougne, asks for your aid. By rescuing his daughter Elena from Plague City, the quarantined West Ardougne, you begin to unravel the mystery surrounding the disease. With her help, you discover the plague is a hoax - a plot by King Lathas to section off the West Ardougne. By confronting him, you find out this was done to protect the rest of Gielinor from the threat in the elven lands. The king sends you on a mission to travel through the Underground Pass and help his ally, Lord Iorwerth, in eradicating his brother King Tyras who threatens to revive the mysterious Dark Lord. After an arduous journey through the pass, you meet with Iorwerth and his forces to end Tyras' evil once and for all. Upon your return to Lathas you are intercepted by Arianwyn, a rebel elf who opposes Lord Iorwerth. He informs you of Lathas and Iorwerth's deception. They manipulated you into removing their final opposition and were now free to bring the Dark Lord back to Gielinor for their own intentions. You work with the elven rebellion to discover the purpose of the plague was to disguise the digsite of the long lost Temple of Light. An ancient place that is key to bringing back the Dark Lord. To make amends for your past mistakes and put a halt in King Lathas' and Lord Iorwerth's plans, you solve the intricate light puzzle designed to protect the Death altar within the temple. After sealing off the temple and preventing the return of the Dark Lord, it's now time to turn your attention to King Lathas Lord Iorwerth and end their schemes once and for all in Song of the Elves. 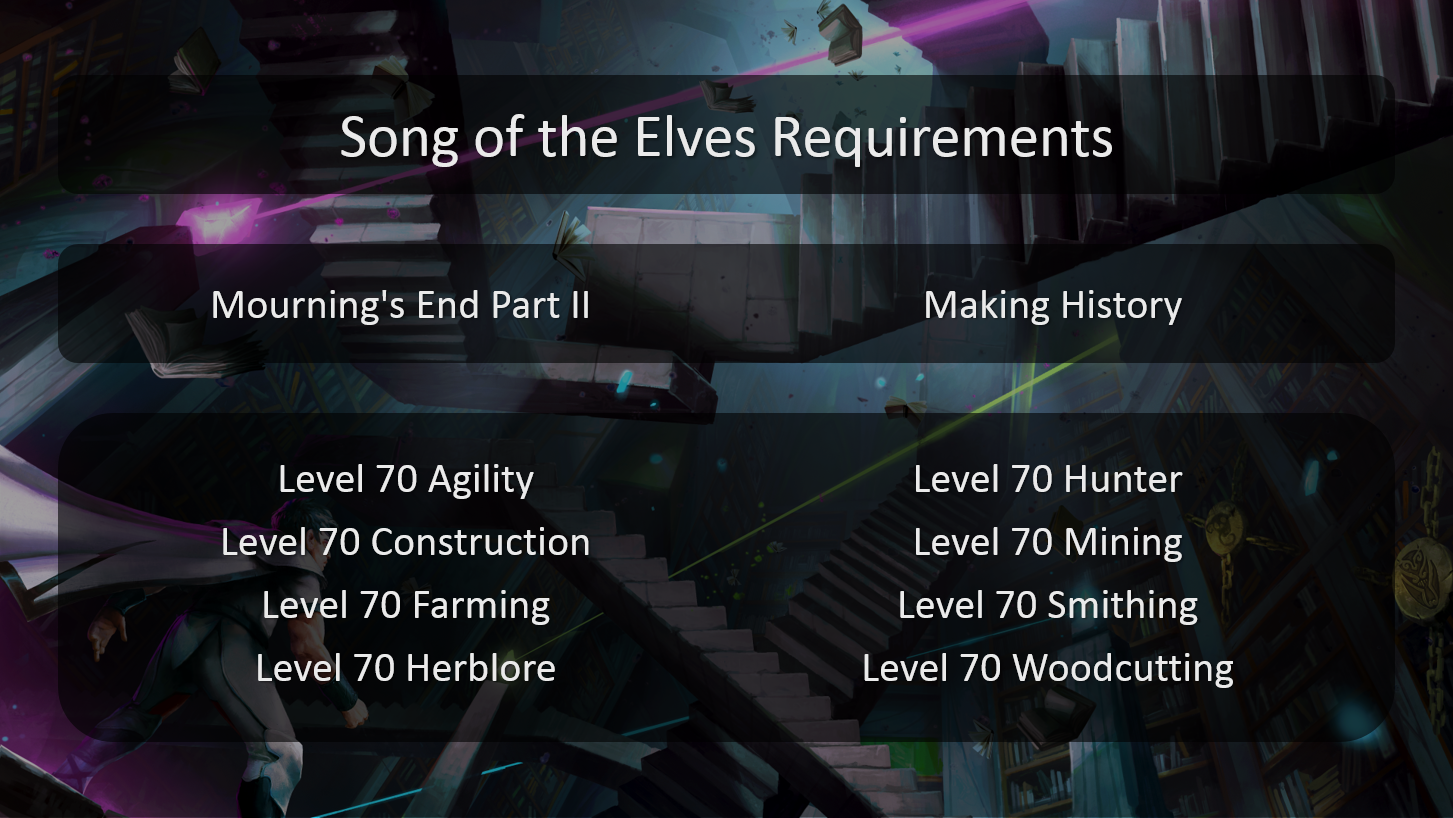 These are the minimum unboosted stat requirements.

Prifddinas
Those of you who complete the quest will gain access to the legendary crystal city of Prifddinas! The elven capital has been quietly waiting on the Old School map since 2004 and now the gates are finally being opened for the first time. Prifddinas is bursting with extra content for you to enjoy, the main features of which are brand new PvM and skilling challenges: The Gauntlet and Zalcano. 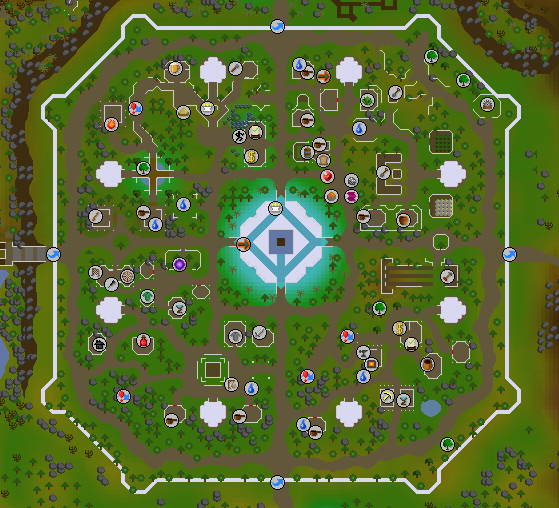 Mod Ry and Mod West were the designers of the layout and architecture of the city.
The thriving city comes to life with a number of unique shops and characters. The full glory of elven architecture is on display at the city's center in the form of the Tower of Voices. There is also the magnificent Grand Library for those who wish to delve into the history of Gielinor. Each zone, owned by one of the eight elven clans, has its own feel based on the clan's specialty. For example, the city features a unique Agility course, courtesy of the Hefin clan. For the Mining and Smithing experts among you, the mines beneath the Trahaern clan area may take your fancy. We have taken this opportunity to expand on the area around Prifddinas too. The new elven town of Gwenith has been added to the north east to add to the depth of the elven part of Gielinor.

The Gauntlet
The newest challenge for PvM is finally here. We present to you, The Gauntlet. This training ground was designed by the elves to train their mightiest warriors during the God Wars will be open to anyone who proves their worth and unlocks the city. Inside, you enter a race against time to collect the materials you need to prepare youself for the final fight. Forge your own crystal armour and weaponry by defeating crystalline monsters and gathering resources before facing the terrifying crystalline Hunllef. A huge shoutout goes to Mod Lenny whose development of a system to randomly generate rooms as you explore was key to making the Gauntlet happen. This challenge is open to Ultimate Ironman accounts - an NPC at the Gauntlet entrance will hold your items for you and return them at the end of your attempt. Hardcore Ironman accounts beware: deaths in the Gauntlet will remove your Hardcore status!

The Crystalline Hunllef designed by Mod Ghost
Defeating the boss offers you a chance to receive crystal armour for use outside of the Gauntlet or even the powerful Blade of Saeldor. Open the drop down menus below for a further look at the stats and effects of both of these rewards: 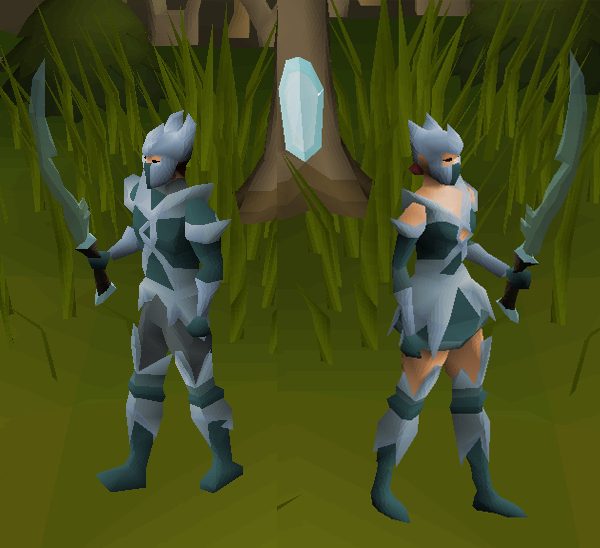 Zalcano
The Hunllef is not the only powerful foe that lies beneath the city. The skillers among you who want to put your Mining, Smithing and Runecraft skills to the test may do so by facing Zalcano. Defeating her will offer you rewards in the form of skilling resources. She also has a rare chance to drop Crystal tool seeds which can be used to make Crystal picks, axes and harpoons.

Zalcano is a powerful demon trapped by the elves at the time of the God Wars.
If you are interested in learning more about Zalcano and how she came to be trapped by the Trahaearn clan, visit the Grand Library to uncover her past. For more information on the crystal tools, open the drop down menu below:

Other Activities
Completing activities around Prifddinas will reward you with Crystal shards. These are used to charge various pieces of equipment but more on that later! The drop down menus below give further details about the smaller activities you can try out around the city. Also make sure to look out for easter eggs and extra content hidden in the city and surrounding areas!

In the second poll for Song of the Elves, we offer the following change which subsequently passed and will go live with this update: "Should stat degradation be removed from crystal bows, shields and halberds? This would mean that normal crystal weapons will act like imbued versions. Crystal weapon imbues will be removed from the Nightmare Zone shop if this question passes. Crystal seeds will be removed from Zulrah's drop table regardless of the outcome of this question." Upon logging in, existing crystal items will be converted to a new system. This means that any crystal bows, shields and halberds in your bank will be converted to crystal weapon seeds, which can then be traded to Ilfeen for the relevant item back with its charges. Any nightmare zone points lost in the process will be refunded. All crystal items outside of the bank should convert naturally.

Competitions
Update: Now that the quest has been completed and the Gauntlet has been bested, we can reveal that there's another competition. We had kept the Corrupted Gauntlet as a secret. We're delighted to announce that the player with the fastest Corrupted Gauntlet time after two weeks will also receive a GTOmega Old School RuneScape gaming chair! Earlier this month we ran three competitions to celebrate the release of Song of the Elves. They were the lore video, login screen and lore writing. We received many entries for each competition and want to thank everyone for their amazing submissions!
Lore Video

We tasked both established and budding content creators to make a video themed around the elven questline building up to Song of the Elves. We received a wide range of entries from comedic to informative and greatly enjoyed watching them all. The prizewinners are: 1st place: K 80 - who submitted a hilarious animated short which is featured at the top of this post. 2nd place: Turtletale - who entered a narrative of the hero's story from the perspective of an elven citizen of Prifddinas. 3rd place: DrPickle - whose comedic video was a series of elven questline themed shows and ads. Check out the videos submitted by our winners above by clicking on their display names! You can also see the videos of the players below who we'd like to give a special mention:
Login Screen
Player artists were challenged with designing the login screen for this release earlier this month. The competition was fierce and the Old School team had a difficult time picking their favourites. After we picked our top four, they were polled in game and the players have spoken:
1st place: God Of Onion 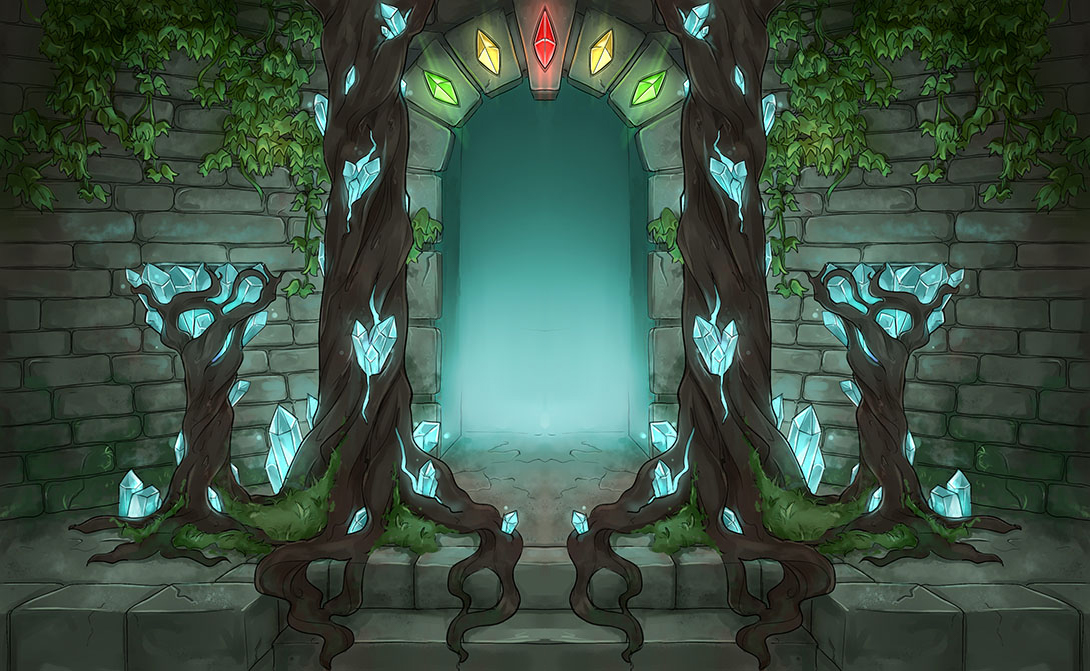 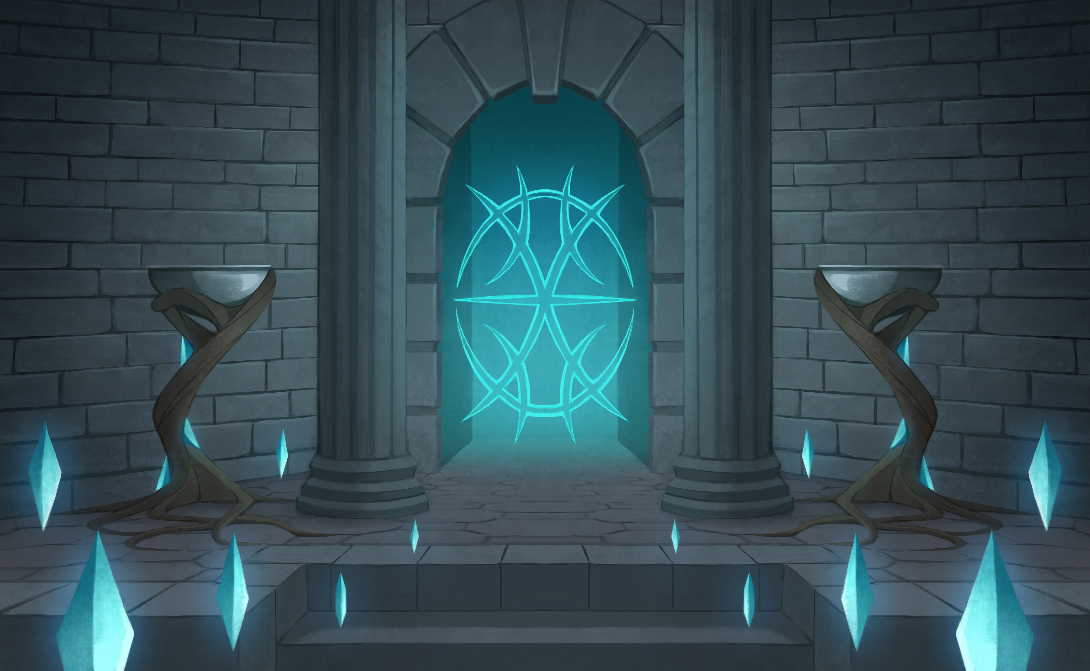 4th place: FaydeneDore
A special congratulations goes to God Of Onion for winning two login screen competitions in a row! Their previous artwork featured Mount Karuulm for the launch of the Kebos Lowlands.
Lore Submissions
We also want to thank the many players who submitted their lore suggestions! We received so many that unfortuantely not all of them could be added but we would like to highlight the following players whose entries have become canon and are now featured in the Grand Library:

Each of these authors are credited in the Tower of Voices itself as a means of thanks for their submissions.
The Gauntlet
As of now, the final competition has begun. As a race against time, this PvM challenge seemed fitting for our final competition. So in our Song of the Elves progress blog, we announced the Gauntlet race. The three players with the top personal best Gauntlet completion times within two weeks of launch will be crowned the winners. Good luck to everyone who will be competing for the grand prize of the custom Old School RuneScape GT Omega Pro Gaming Chair! 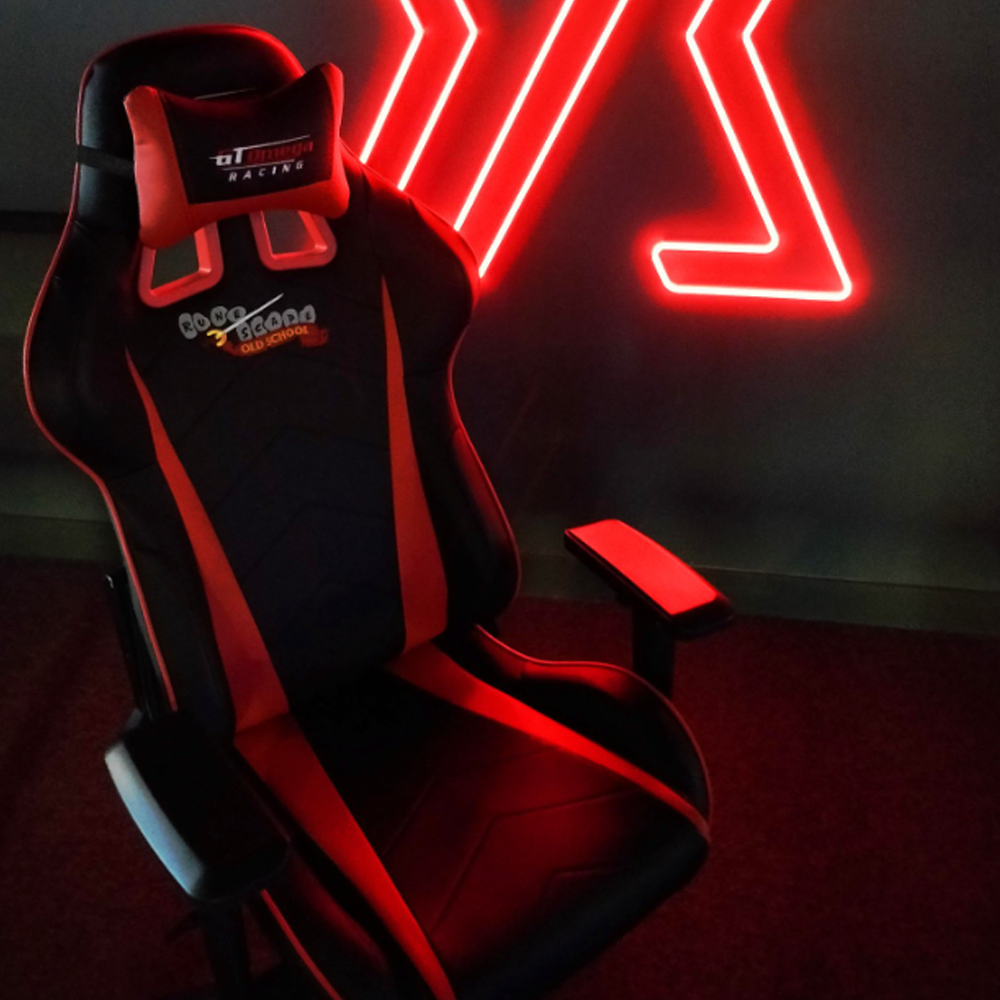 Congratulations again to all of our winners and thank you to everyone who entered. Current winners can expect to be contacted regarding their prizes in the coming days and the Gauntlet competition winners will hear from us shortly after it closes.

Special Thanks
In addition to our competition entrants and lore writers, we would like to extend some additional thanks. These namely go to players who play tested Song of the Elves and helped us reach our vision for the quest. These thanks go to: We would also like to especially thank Mod Ian, Mod Surma, and Mod Slippers, the Audio Designers who helped bring the content to life with their music tracks and sound effects throughout the quest and Prifddinas. The same thanks are extended to all the Mods who support the Old School team, which allows us to create content such as Song of the Elves. Lastly, we'd like to thank you, the players. Enjoy the quest. ~ The Song of the Elves team, Mods Curse, Ed, Gee, Ghost, Lenny, Ry, and West

The Merch Store
To celebrate the launch of the quest, we're adding a range of elven goodies in our merch store! The latest designs from AngelsScapes are now available and include the Crystal Halberd Keyring, Crystal Bow Pin, Trimmed and Untrimmed Ranged Skill Cape Keyrings and Ardougne Max Cape. For those complete the quest, why not celebrate by equipping your own Quest Cape IRL by snag one of the Untrimmed Quest Cape Keyrings launching this month to join the already popular Trimmed Quest Capes! 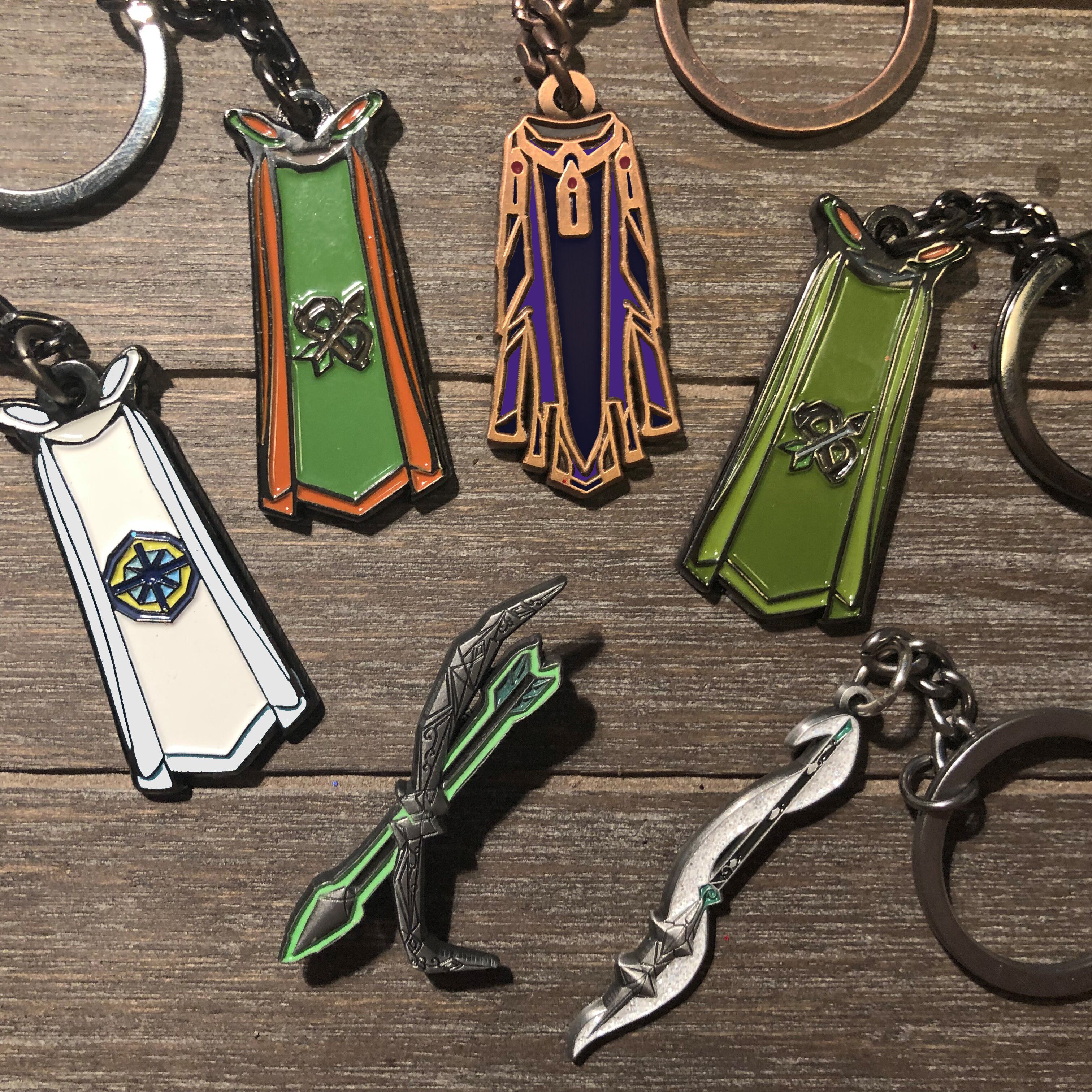 We're also releasing two new skillcape keyrings: Ranged and trimmed Ranged. You will now find these in addition to the Song of the Elves merch above in the store. Keep an eye on our Twitter @OldSchoolRS and other social channels for other additions coming soon such as our RuneFest 2019 hoodies and tees which will be available for pre-order shortly. On the topic of future merch, we may also release a line of Old School themed mugs if there is sufficient demand. Let us know what you think of the idea and vote for your favourite from these concepts in this poll. 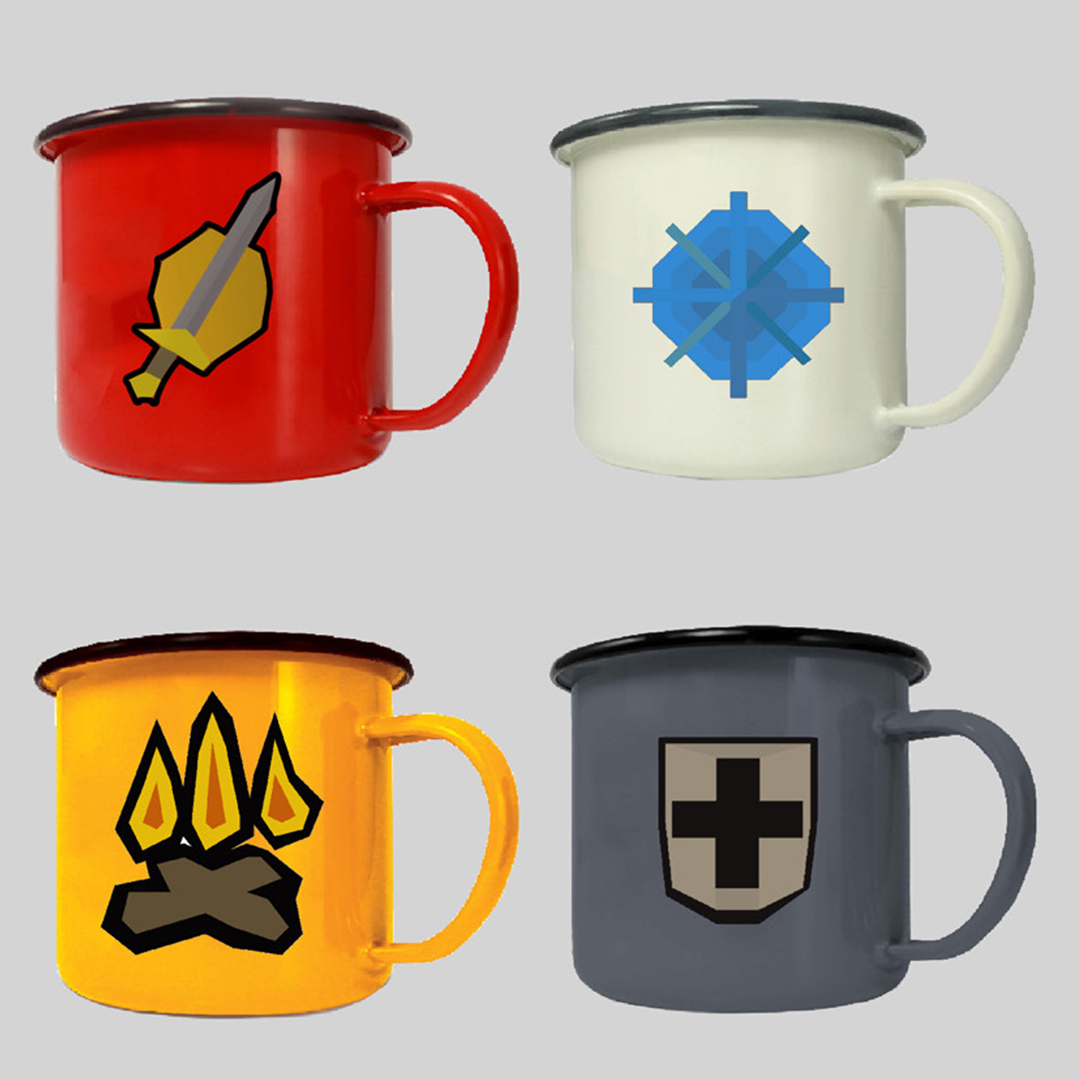 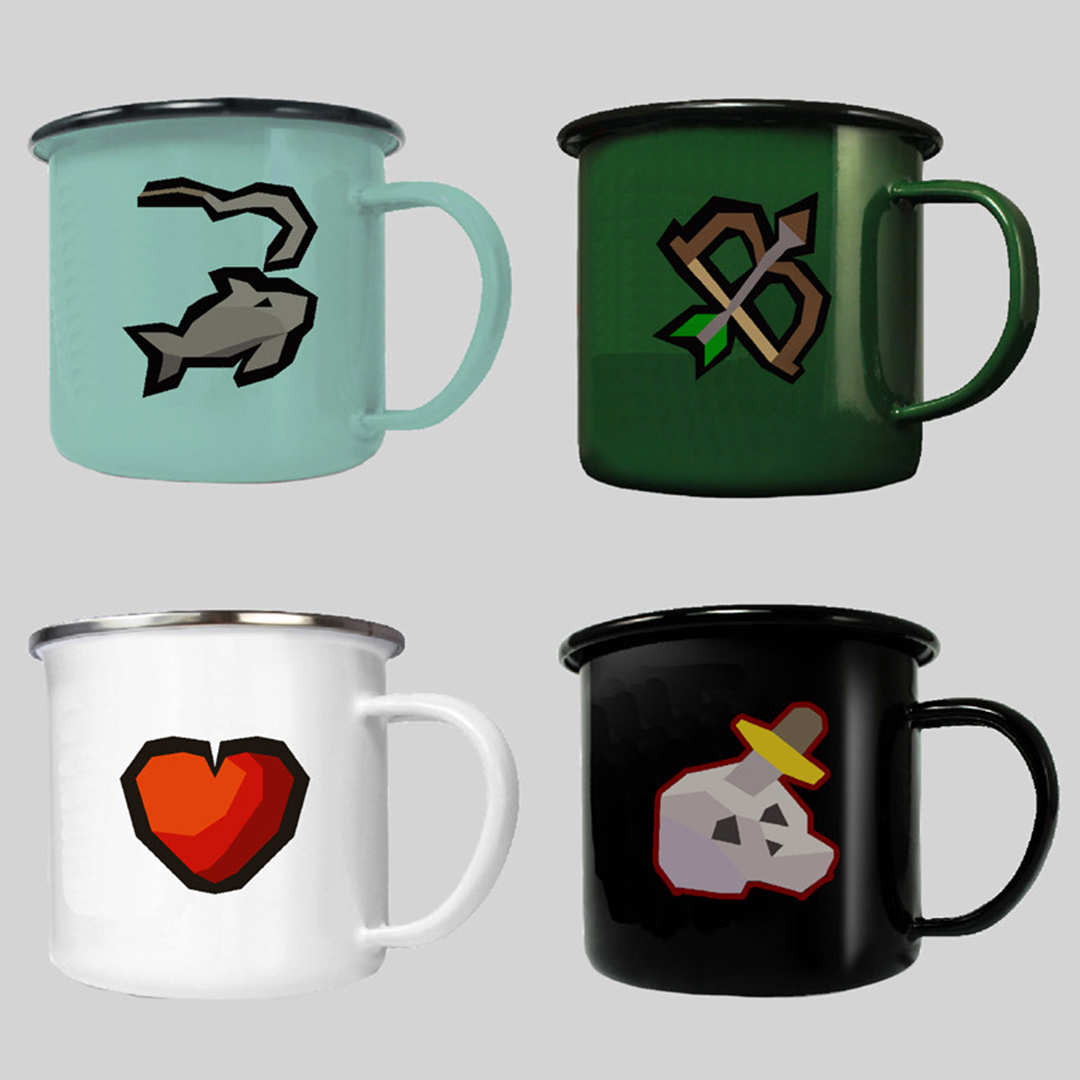