The Garden of Death & More 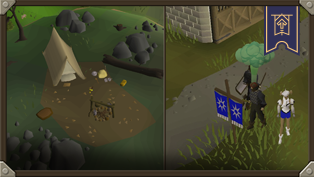 
Some of you expressed interest in a condensed list of changes for when you’re short on time. So… we’ve made one!


We’re still looking at other ways we could update our updates, so watch this space!

Still here? Read on for all the juicy details about everything listed above!

The Garden of Death 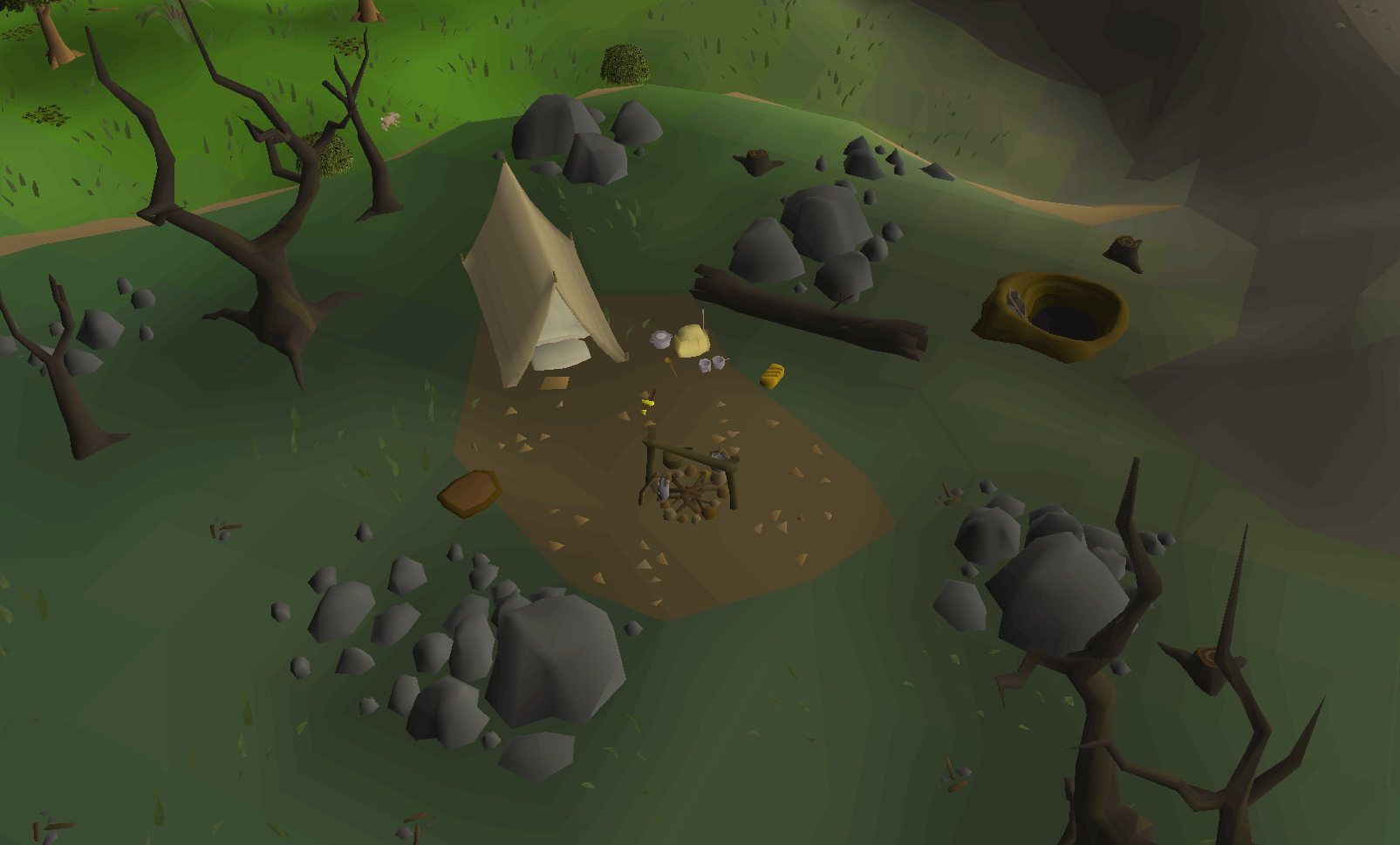 In our newest Twisted Tale, you’ll piece together a long-lost language and unravel the mystery of some ancient ruins. Welcome, adventurer, to The Garden of Death.


This quest contains no dialogue and focuses solely on environmental storytelling, so make sure that you set aside some time and prepare to be fully immersed in the world around you!


You’ll need 20 Farming to start the quest, and you can begin your investigation at the campsite south of the Lizardman Settlement in the Kebos Lowlands. 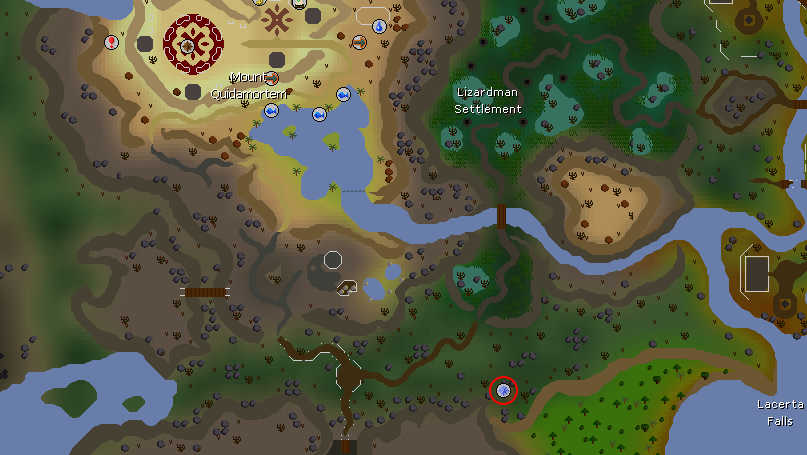 The starting location of The Garden of Death.


That’s not all the questing news we have for you this week! Y’all ready for some improved XP rewards?


You voted overwhelmingly in support of this, so we shan’t keep you waiting any longer. Here’s the full list of all the quests impacted, and details of where you early-bird adventurers can claim your extra XP.

As the table suggests, most of the XP you’re owed can be claimed from Perdu, although a few other NPCs are also getting in on the game.


If for whatever reason you don’t want to be showered in XP the next time you speak with Perdu, you can politely decline and come back another time.


Please do bear in mind that accepting XP from Perdu is an all or nothing decision – you won’t be able to pick and choose which rewards you get. If you’re keeping one of the impacted skills at a specific level, or holding off on getting a 99 until your friends are around to celebrate with you, we suggest giving Perdu a wide berth until you’re ready.


On that note, we’ve opted not to increase Combat XP rewards retroactively. We don’t want to risk ruining restricted account builds with a single dialogue option, but neither do we want people to feel locked out of rewards that they’ve earned. Additionally, leaving Combat XP as it is allows restricted account players to enjoy all the same quests they’re used to.


As a general rule, if you obtained the end-of-quest XP from a dialogue option, Tomes, or Lamps, you’ll have to go speak to the NPC who gave you those options instead of Perdu. We’ve linked the OSRS Wiki entries for all of them in the table above, so you can see exactly where they hang out and what they’ll give you.


Lastly, as per your vote, the XP reward ranges given above are going to be the standard for future Master and Grandmaster quests. Hmm, looks like there’s a new one coming up soon! Perhaps you’ll learn more at the Winter Summit…? 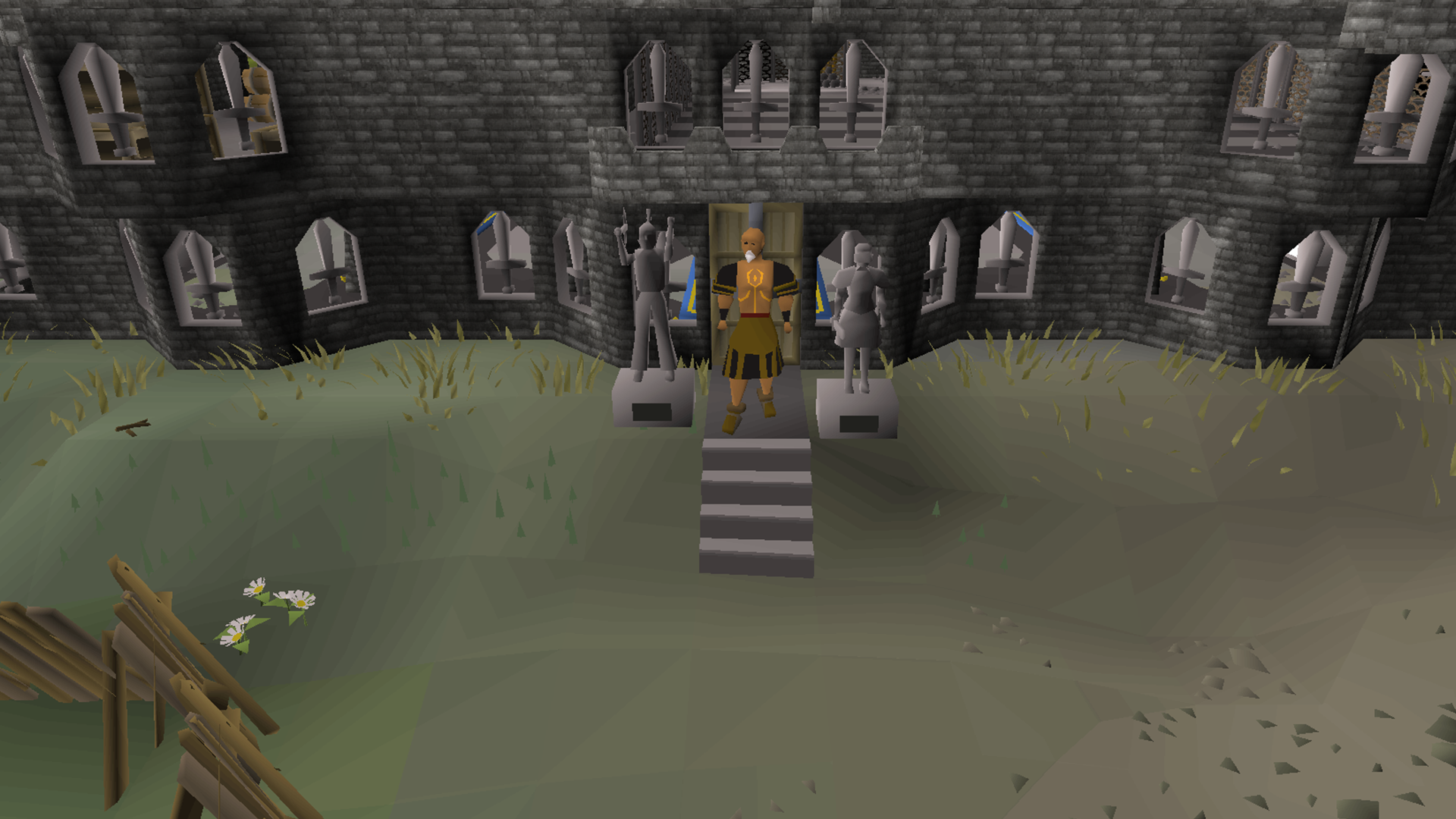 Alongside all of the questing goodness above, you also voted for additional rewards for Combat Achievements. In case that particular poll blog passed you by, here's a list of all of the rewards we’ve added:


Speaking of Combat Achievements, we’ve added nearly 50 of them to Tombs of Amascut! Hooray!


Now, we’re not going to list them all here – you’ve had your fill of tables for the day – so make sure to check them out in-game after the update.


We’re excited to see you get stuck into Tombs of Amascut all over again, and hope you have loads of fun challenging yourselves with this new batch of Combat Achievements!


Most of you will already be familiar with Poison Dynamite, which we first offered in Poll 76. For those of you who aren’t, Poison Dynamite is a new weapon which lets skilling pures secure kills (when necessary) without gaining Combat XP.


Players can now use their Firemaking skill (at level 50 or above) to craft untradeable Poison Dynamite from one Dynamite and three Cave Nightshade.

What is that mysterious fizzing noise...?


After 5 ticks (3 seconds), the Poison Dynamite will explode, dealing between 0-6 damage. This scales with your Firemaking level. If the explosion hits, there’s also a 25% chance to poison the target. Poison damage begins at 6.


The Dynamite’s damage roll is based on your selected combat stance – so enemies weak to Ranged are more likely to take damage from the explosion if you’re holding a bow instead of a scimitar.


The damage type is the same as your currently equipped weapon, too – so if you’re attacking an enemy that’s immune to a certain damage type, watch what you’re wielding!


You can only deploy one piece of Poison Dynamite at a time (sensible…), and only one Poison Dynamite can be active on any given square. This means that multiple accounts are unable to stack their explosions on the same square.


Additionally, you’ll only be able to hit a single target, even if a 3x3 explosion is in range of several NPCs.


One final thing: the TzHaar have forbidden the lighting of Poison Dynamite within the Fight Caves. Scorching hot volcanic undercities are not the kind of place you want to leave this stuff lying around – and besides, it sets off Jad’s allergies.


Note: This section was originally written to be included in November 23rd's Game Update Newspost and doesn't include the service outage issues from Tuesday, November 22nd. If you'd like to learn more about those, check out this post.


UPDATE: We’d like to thank everyone for their patience following last week’s server outage. The team is still committed to delivering our ‘Make Good’ plan, and we’ll have more news to share tomorrow! Keep your eye on the newspost above for updates.


We recently had a period of extended downtime for UK and German worlds, which allowed us to perform some much-needed upgrades in the relevant data centres.


Since this maintenance, we’ve seen loads of positive feedback about the server stability and latency for the affected worlds, leading players who frequent other data centres wondering ‘when’s our turn?’


Well, we’ve got good news! We currently expect to upgrade the Australian and US West worlds before Christmas (only a month away now!) on December 6th. Maintenance will take place between 10:30 - 13:30 GMT for the US West worlds and between 14:00 - 17:00 GMT for the Australian worlds. This means that all worlds in that region will be unavailable during the alloted times.


We are also looking to tackle the US East worlds in January 2023. Now, this is subject to change, but nevertheless, we hope to have more of you enjoying consistent and stable performance before long.


This week’s update also comes with some ‘under the hood’ work to optimise the game’s performance and make it more stable. All this hard work means that you can enjoy existing and future content in the best way possible.


Good news, everyone! Our ace mobile team have figured out a solution for the black screen issues players have been experiencing on mobile platforms.


Unfortunately, in fixing the problem we’ve had to deprecate support for OpenGL ES 2.0, so devices that don’t support OpenGL ES 3 or higher will no longer work with the mobile client. 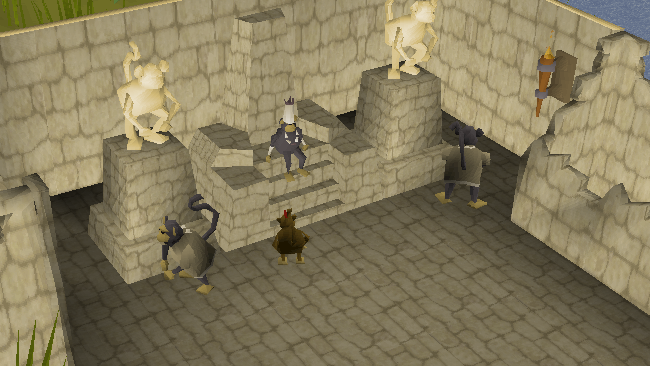 In Case You Missed It


This year’s Winter Summit is a little over two weeks away and will take place at 20:00 GMT on December 10th. It’s THE place to be for news about everything coming up in 2023, so don’t miss out!


Don’t forget, if you tune in a little earlier you can catch EVScape’s Battle Royale where your favourite creators face-off for their chunk of a $15,000 prize pool. Get yourself in the competitive mood and check out this epic cinematic trailer by Golden Gnome Winner Hooti Tooti!

And if that wasn’t thrilling enough, check out Soup’s YouTube channel, where you can watch the first episode of Season 3 of the Gielinor Games! This is without a doubt the most important sporting event going on in the world right now, so do give it a look.

An Update On The Wilderness Boss Rework 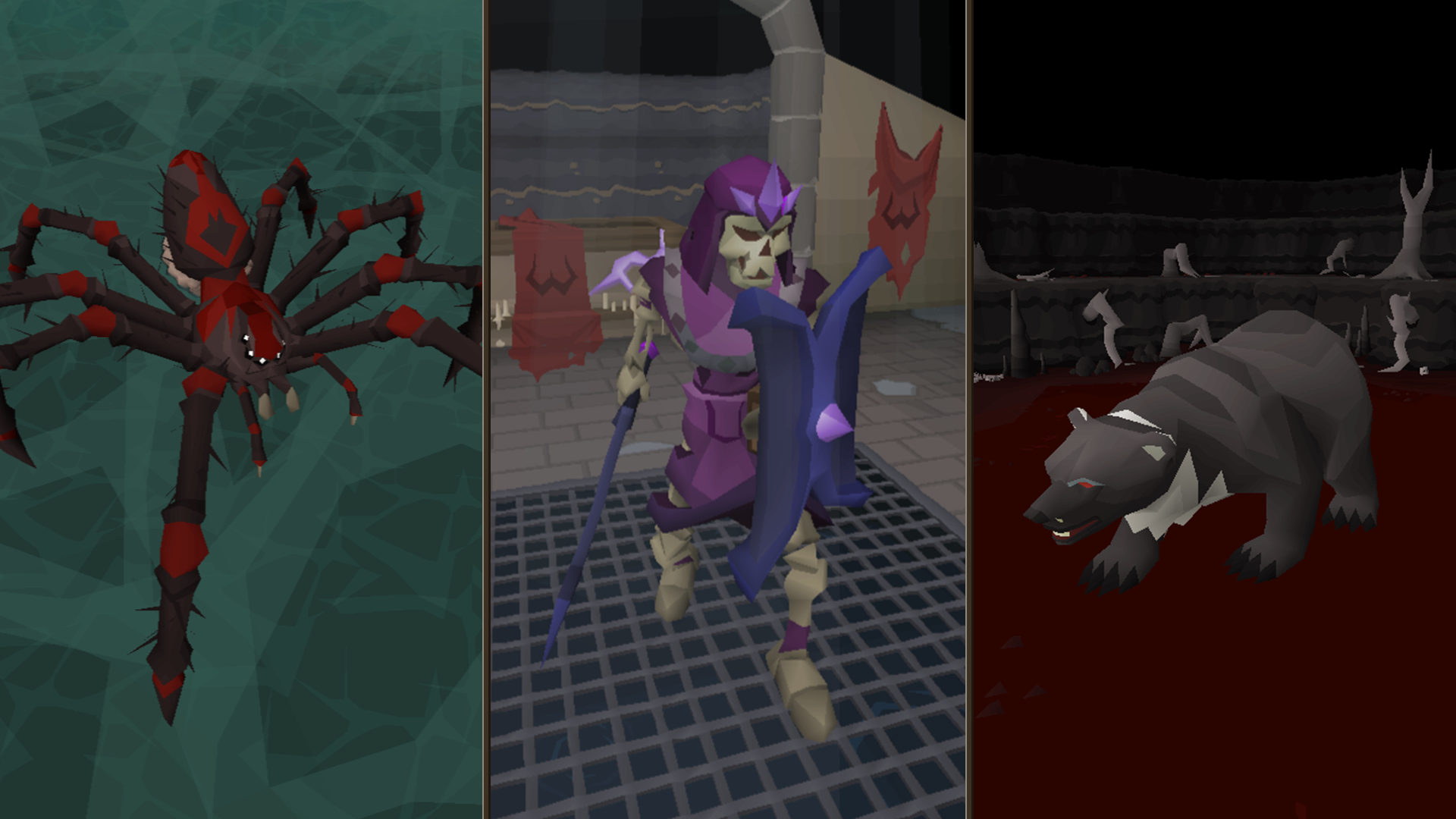 Originally, we’d planned for this section to tease the Wilderness Boss Rework, scheduled for next week’s game update. Unfortunately, yesterday we made the difficult decision to delay the release until January 2023.


We understand that you’re as excited as we are to get your hands on the reworked Wilderness bosses, and that this delay is disappointing. In the late stages of testing we discovered a number of significant issues that must be fixed before the content can launch. At any other time of year, this wouldn’t lead to a significant delay – but during December, we operate at reduced capacity, with many members of the team taking holiday to spend time with their family members at Christmas.


We apologise to everyone who was anticipating this update, and hope you understand that we’d rather delay content so that it meets our strict standards than rush a release that falls short.

Next week in Old School


With the unfortunate news above, next week's update may not be as hefty as we imagined it might be but we want to commit to giving you all a small taste of what's to come (where possible) so that you're not caught off-guard and have some time to get excited about upcoming updates.


This game update and the one before brought a large chunk of the Poll 77 changes to you all but if you're waiting on any in particular then it's likely you'll see additional Poll 77 changes making their way to you next week.


On top of that, those of you who enjoy both Morytania and going fast can look forward to the full releases of A Taste of Hope and Sins of the Father on Quest Speedrunning worlds, as well as another batch of quests entering their betas so that we can fine-tune completion times!


Last week we shared some pictures of a fancy new ceramic 'Jolly Boar Inn' tankard and a Father Gnome Child Xmas jumper, two of the latest goodies to arrive at the Merch Store.


We also mentioned a handful of swanky tourist tees – so here they are, in case you’re still looking for the ideal gift for the globetrotting adventurer in your life! 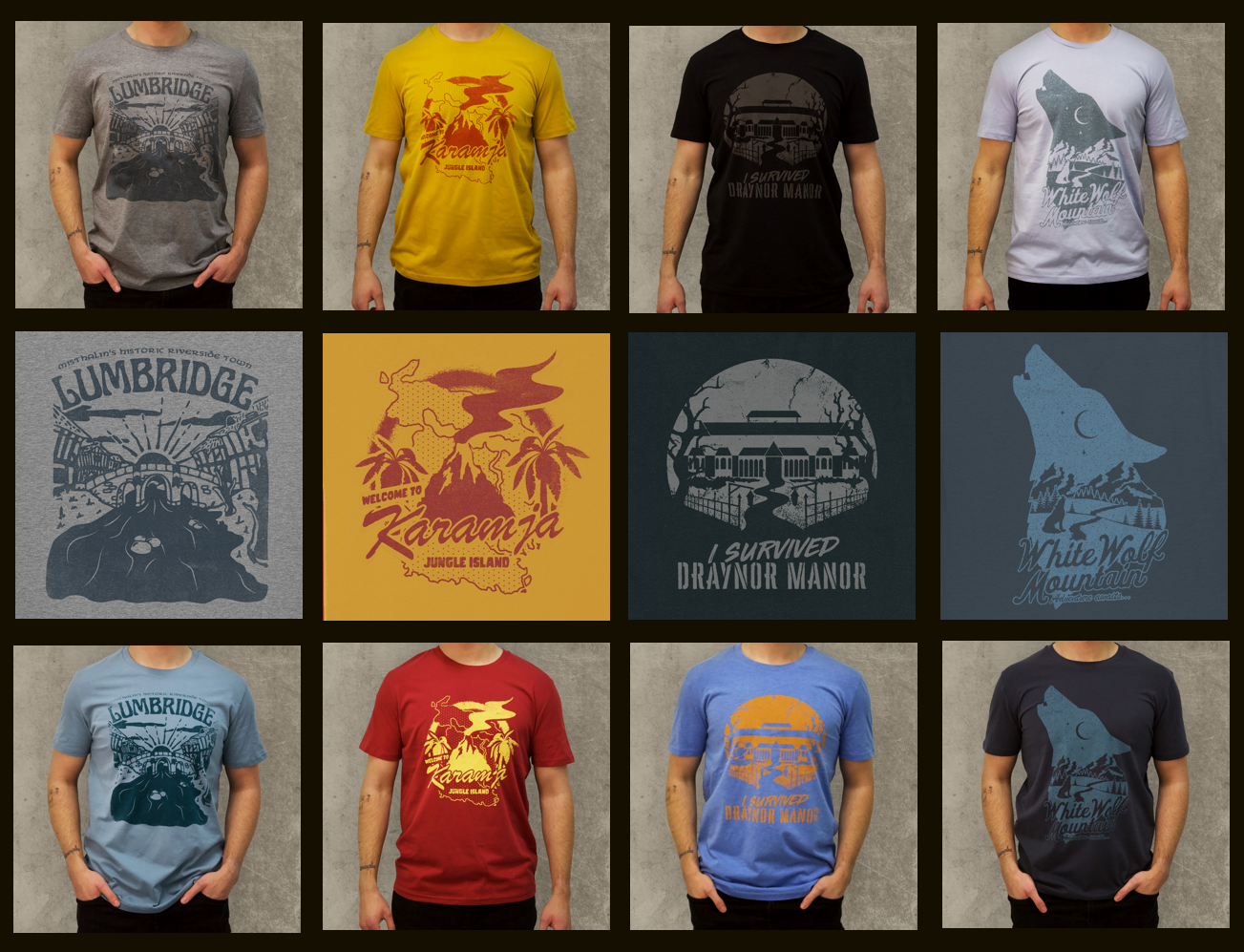 Check out all these new lines, plus the range of official pins and keyrings by the talented Angels Scapes.


The PvP Arena is using 'Pure' loadouts in Ranked Duels and Tournaments this week.