A dark force has made its home beneath the town of Slepe. Do you have what it takes to defeat The Nightmare? 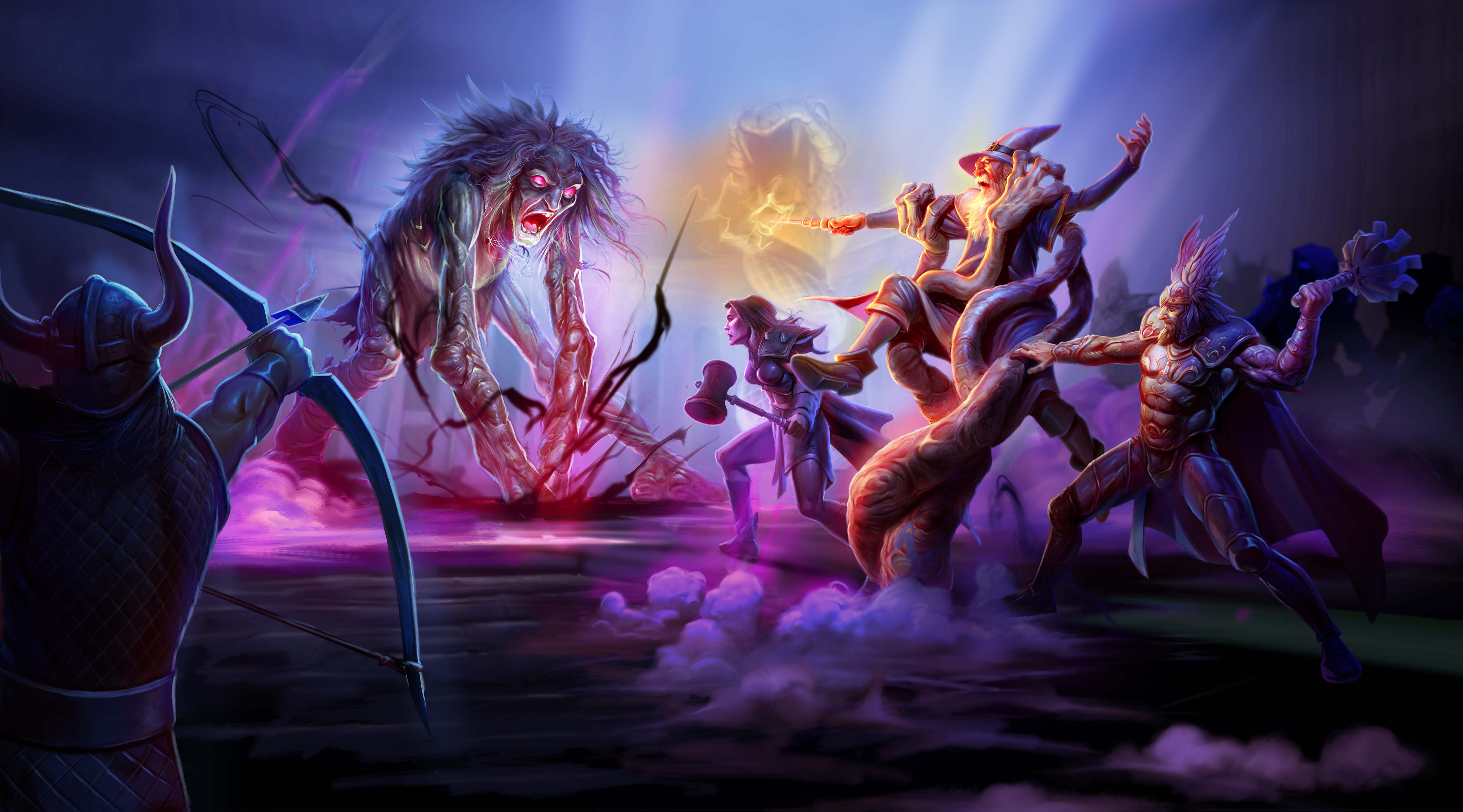 It started with a dream.

For too long, the sirens of Ashihama had been plagued by a terrifying monster known only as The Nightmare. They dreamt of one day defeating the creature for good, but they only succeeded in driving it across the ocean, to a far-off land where even the bravest of sirens feared to tread. A land called Morytania.

But one siren, Shura, refused to give up on her dream. Many of her companions had fallen victim to The Nightmare in that final battle, and she wasn’t about to let it hurt anyone else. She journeyed across the ocean, where she found The Nightmare lurking in the cursed town of Slepe. It was injured. It was weakened. But it was slowly making its presence known, feeding on the dreams of the innocent townsfolk and growing stronger every moment.

Shura can’t face The Nightmare alone. She needs your help to beat it back, to keep it contained until she’s able to defeat it once and for all.

Are you up to the challenge? Or will you fall, like so many others, to the eldritch power of The Nightmare?

Update: 18:00pm UTC 6th February. We've seen reports of lag and crashes from those playing on iPhones running iOS 13.3. We're investigating the cause of the issue, and will update this section tomorrow.

The Basics
If it’s your first time visiting Morytania, you’ll need to complete the Priest in Peril quest before you can proceed. The Nightmare is a group boss located beneath the Sisterhood Sanctuary in Slepe. To get there quickly, you can take a boat straight to Slepe from outside Port Phasmatys for a fee of 10,000 coins. Or, if you’ve completed A Taste of Hope, use Drakan’s medallion to teleport to Ver Sinhaza and run north. 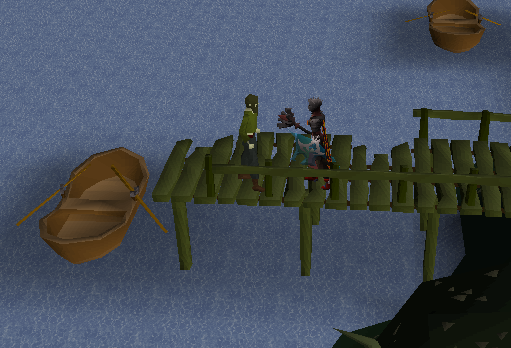 Once you enter the Sanctuary, move down into the crypt, where you will find Shura waiting for you. 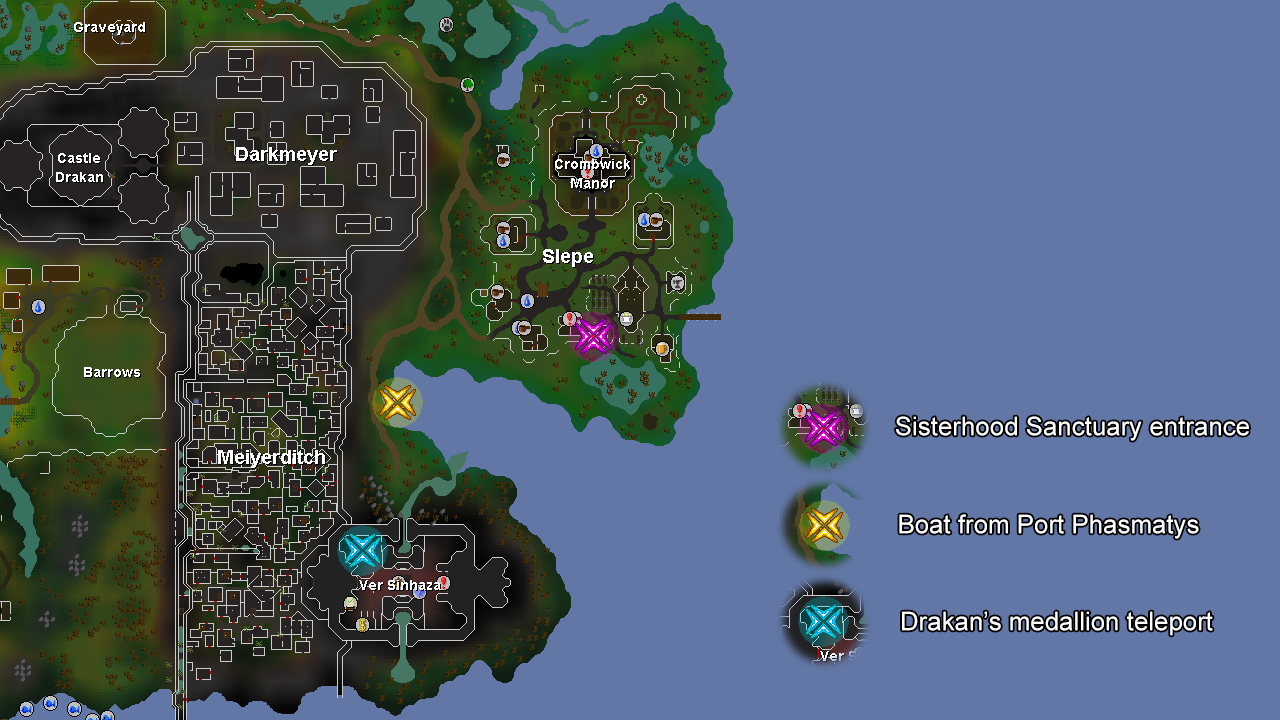 Upon entering the arena and disturbing The Nightmare, a timer will begin counting down the seconds until she awakes. You have until then to join the instance, for once the fight begins it will be too dangerous to cross the barrier. Up to 80 players can enter the arena at one time.

Notably, Iron players must enter the fight through a different portal, located across the room from Shura. This system protects against griefing, in much the same way as in the Corporeal Beast instance. 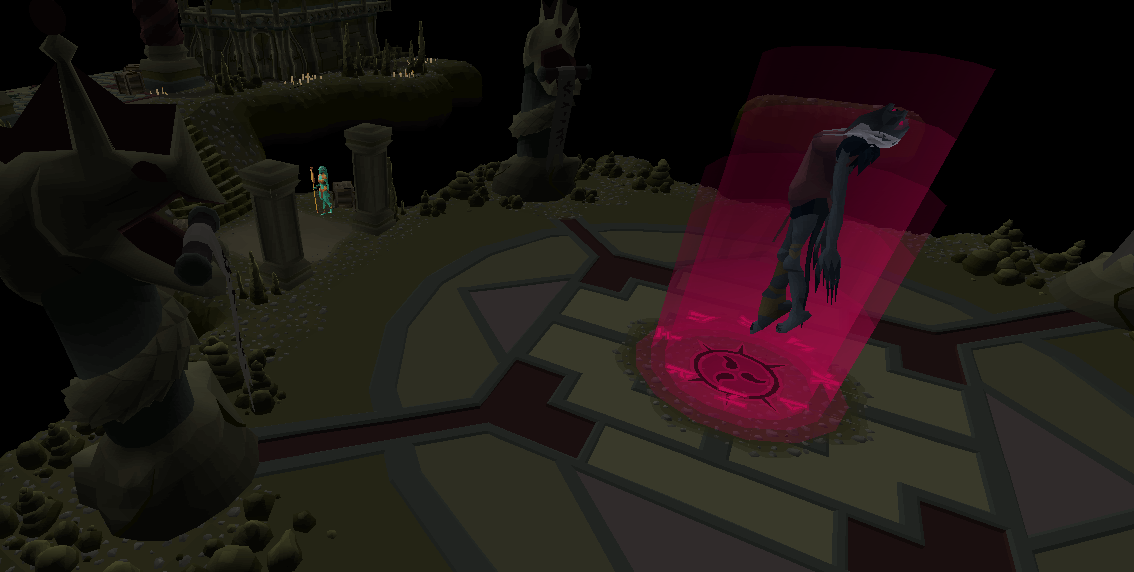 If you’re unsure how much longer is left in the current battle, take a look at the symbols beneath The Nightmare’s husk in the Sisterhood Sanctuary. Each one indicates a different phase of the fight. 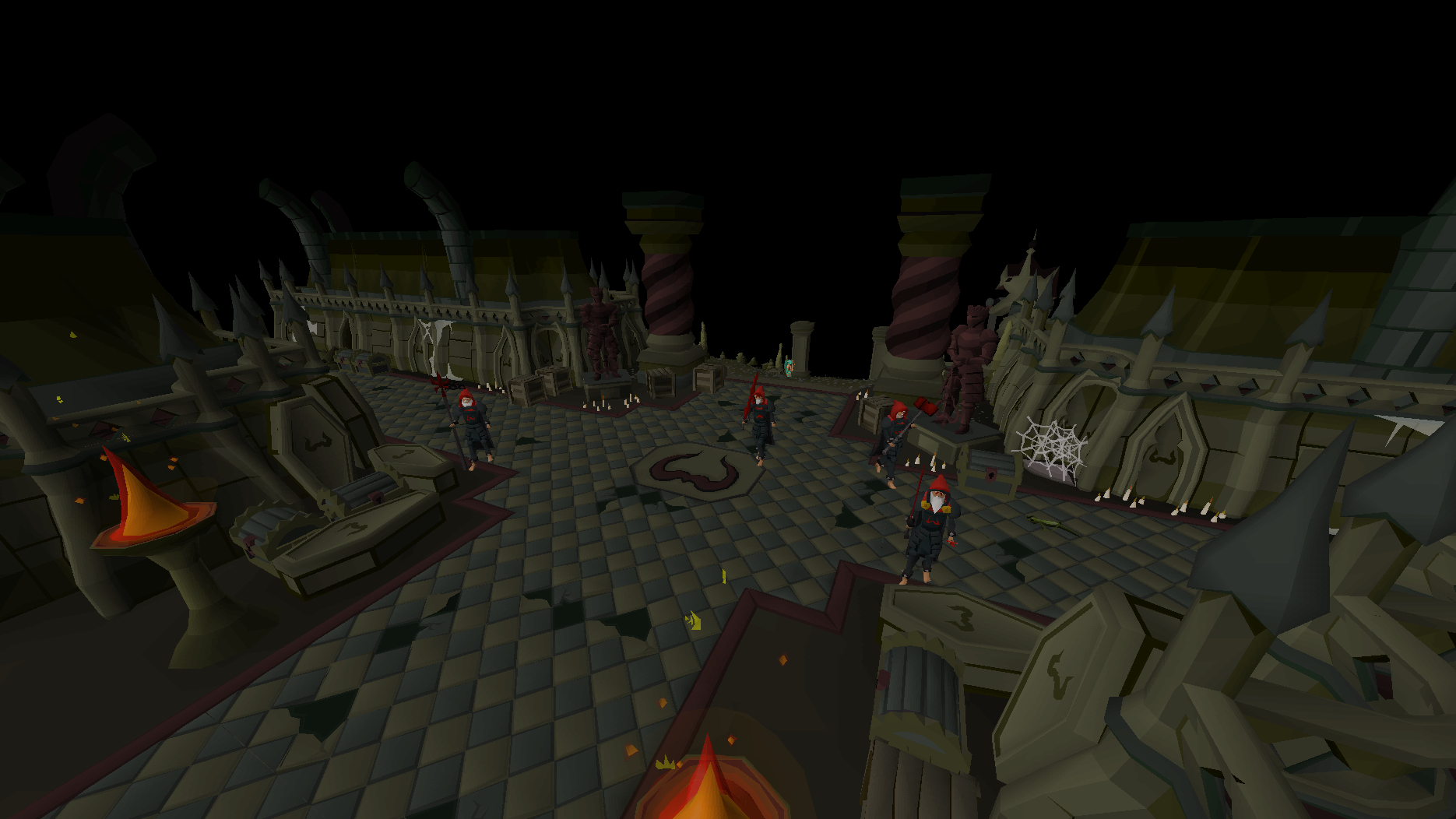 If you die in the dream, you die in real life! Well, in your real Old School life, anyway. This means that Hardcore Iron players will lose their status if they die to The Nightmare. Regular players need not panic too much: years of island living have made Shura an adept scavenger, and should you succumb to The Nightmare she will rescue your items and charge a fee of 60,000 coins to return them to you. Hey, a girl’s gotta make a living.

The Rewards
To earn your reward from The Nightmare, you must do a minimum amount of damage.

The Nightmare also has a rare chance to drop a single unique reward when she dies. This item can be given to any player that met the damage threshold, but players with higher contributions will have a better chance of getting it.

Finally, in addition to the main unique drop, every player who contributes enough to the fight will have a chance of getting one of The Nightmare’s tertiary drops. These are the pet, jar and clue scroll drops. Again, the more you contribute the higher your chances are. 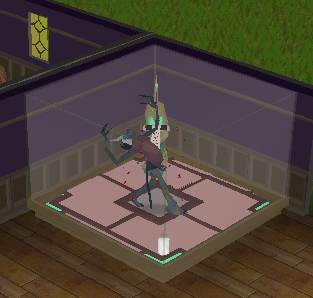 The Inquisitor's Mace was once the personal weapon of The Inquisitor, one of the founders of Slepe. Since the sleeping curse incident and the subsequent disappearance of the Sisterhood’s leadership, it has remained sealed in the Sisterhood Sanctuary, lost to the world. However, The Nightmare’s arrival has unearthed this powerful weapon. Are you brave enough to claim it? 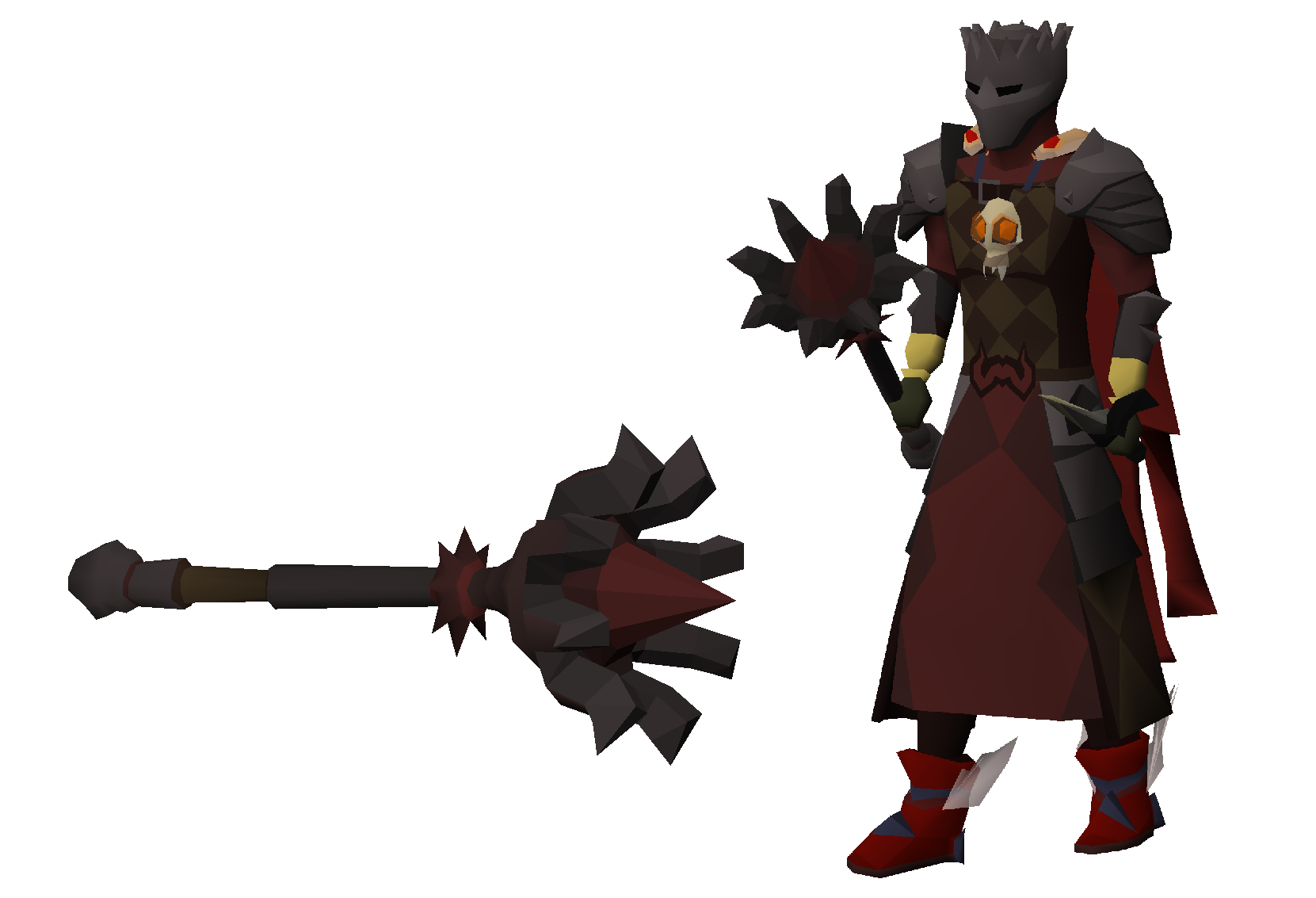 This 1-handed crush weapon is a rare drop from The Nightmare. It is tradeable and requires 75 Attack to equip. It does not degrade. It has the following stats: 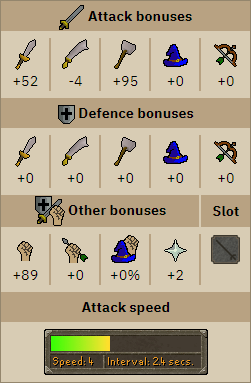 Its former name long since lost to the world, the Nightmare Staff is a powerful magic weapon once in the possession of the shamans of Ashihama. Through the use of different coloured orbs, the shamans were able to adapt the staff to any task, giving them complete power over the island. Alas, even the shamans were not able to withstand the power of The Nightmare. Now, their staff is all that remains... 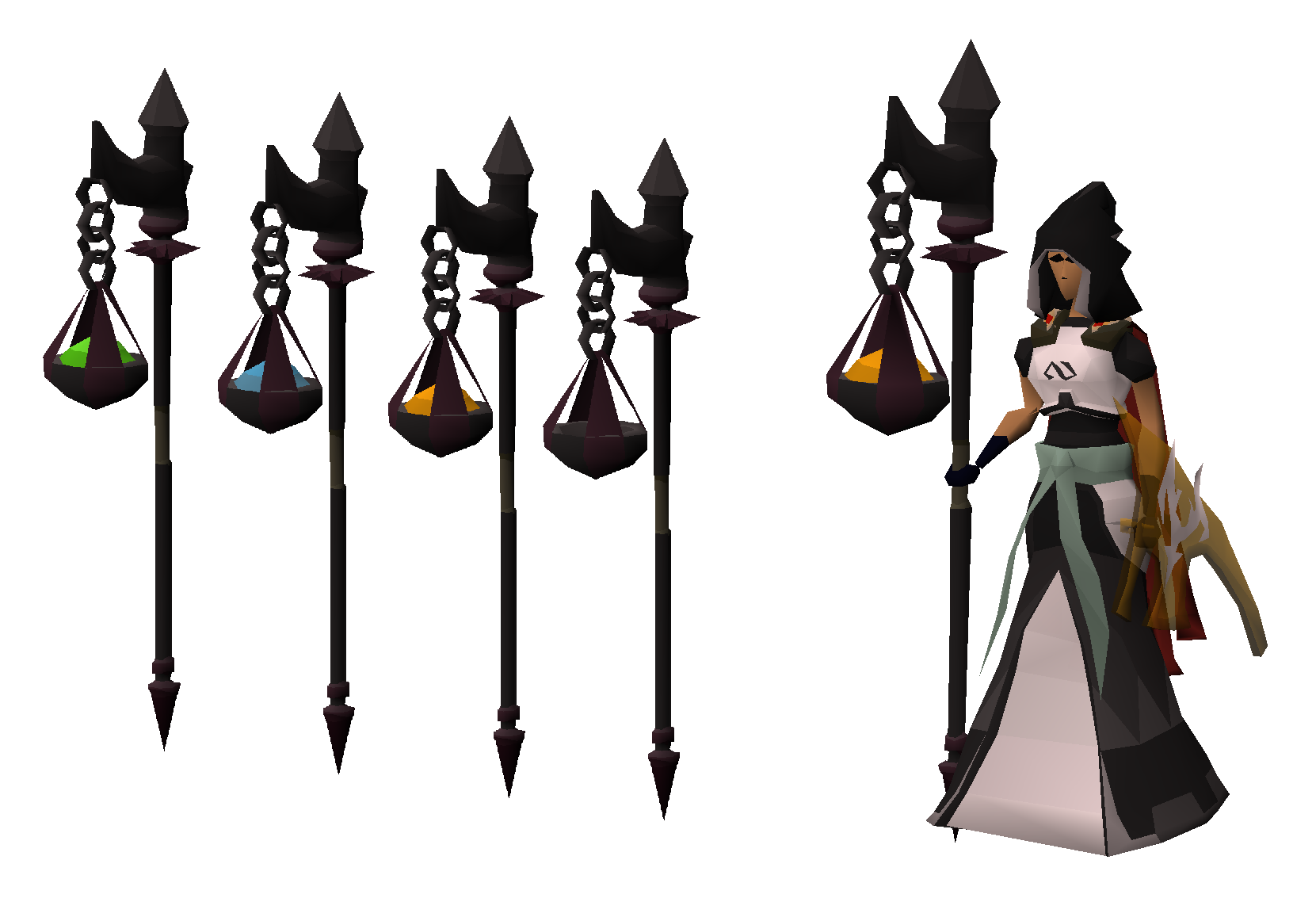 The Nightmare Staff is a rare drop from The Nightmare. It is tradeable and requires 65 Magic and 50 Hitpoints to equip. It does not degrade and can autocast both standard and Ancient spells. It has the following stats: 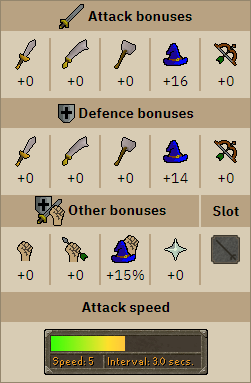 The Nightmare also has a rare chance of dropping three different orbs. These orbs are tradeable and can be attached to the Nightmare Staff to change its powers. Attaching an orb to the staff makes it untradeable and gives it a Magic requirement of 75. The orbs have the following effects:
In dangerous PvP deaths, staffs with orbs attached will drop both the staff and the orb. Inquisitor's Armour

The Inquisitor's Armour once belonged to The Inquisitor. She crafted it from her old Justiciar garb, altering it to better reflect her newfound ferocity. The Nightmare’s emergence has disturbed this powerful armour from its resting place, ready for a new owner to claim it.

When killed, The Nightmare has a rare chance of dropping one of the three pieces of The Inquisitor's Armour, a new set of melee armour with a focus on crush accuracy and defence. The three pieces are the Great Helm, the Hauberk and the Plateskirt. All three pieces require 70 Strength and 30 Defence to equip. They are all tradeable, do not degrade, and can be packed into a set at the Grand Exchange.

The Inquisitor’s Armour has the following stats: 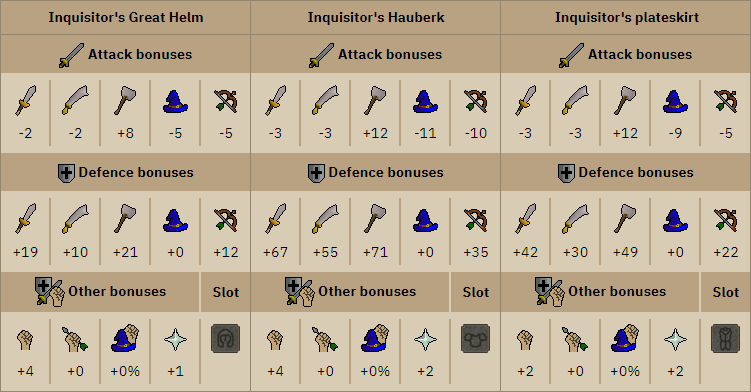 Special thanks to Mod Ian and Mod Surma for their work on the music and sound effects for The Nightmare.

Remember, the horror doesn’t end here. Stay tuned for the next step in the Morytania expansion: the vampyre fortress of Darkmeyer.