This week sees the release of the highly anticipated Seed Vault in the Farming Guild!

The Seed Vault
A brand new Seed Vault has been added to the Farming Guild in Kebos! Stored seeds are separated by type and you can add your favourites to their own section - perfect for setting up your Farming runs. Note, however, that it only stores standard seeds (all of them), not quest ones. 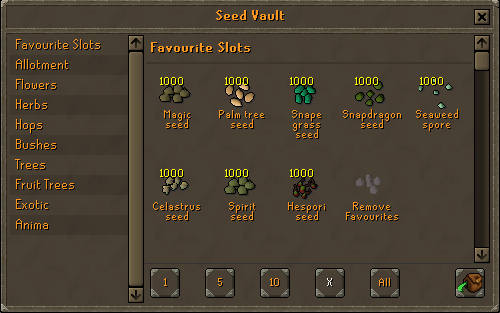 Here are some words from Mod Maz about the project: The seed vault started out as a project to add to the Farming Guild and was initially started by Mod Munro. With his departure, it was left without an owner and no real time to take it on. I loved the idea so much and farming is my favourite skill so I really wanted to see it in the game. So, I used my own time to get the majority of the interface working and then we brought it into the dev team officially. This enabled me to spend enough time on it to make it as easy to use as possible. It features buttons similar to the bank for withdrawing and depositing seeds so you can get to them quickly. Even better is the favourite slot feature - 8 slots you can direct what seeds to contain, either by dragging and dropping or right-clicking any of the seeds in your vault. Whilst this is currently 8 slots, it potentially could be increased by a few in the future if needed. The list on the left panel allows you to quickly hop between categories of seed in case you do not wish to use the favourites feature. On top of this, helpful players highlighted to me the Miscellania Kingdom gives seeds, and hence I have integrated the seed vault into that functionality too. If you have existing seeds of the type you are going to receive in the seed vault already, the seeds will go to your seed vault, not your bank. If you don't have any of those seeds in the vault, then it will use your bank. From a technical perspective, the project wasn't that difficult, the worst bit was actually making the dragging and dropping work correctly in the different scenarios of whether the place it was being dropped to was a favourite slot or not. Obviously with any project with usability features, it is subjective as to what is best and some of the feedback from playthroughs reflected the same considerations that I'd made whilst designing it. Sometimes there is no "right" way to implement a particular feature and therefore different people will want things to have different behaviour - this can be tricky to balance and rationalise to make good decisions and I hope I have struck a happy medium with the behaviour that it currently exhibits. If you have any constructive feedback on your seed vault experience, I'd love to hear it on the forums, twitter or reddit. I love farming and working on interfaces, so I've really enjoyed working on this project. I only wish we'd gone with the giant iron squirrel model for the vault... Note that Ultimate Ironmen will not have access to the seed vault as it was agreed that this would be too powerful for the game mode.

Google Login on Android Devices
Players on Android devices can now log into Old School with their Google account via a new button on the login screen. A new account will automatically be created if you haven't previously linked your account to play RuneScape (the other one!). Bear in mind that if you have an active login saved, you won't see the Google option. 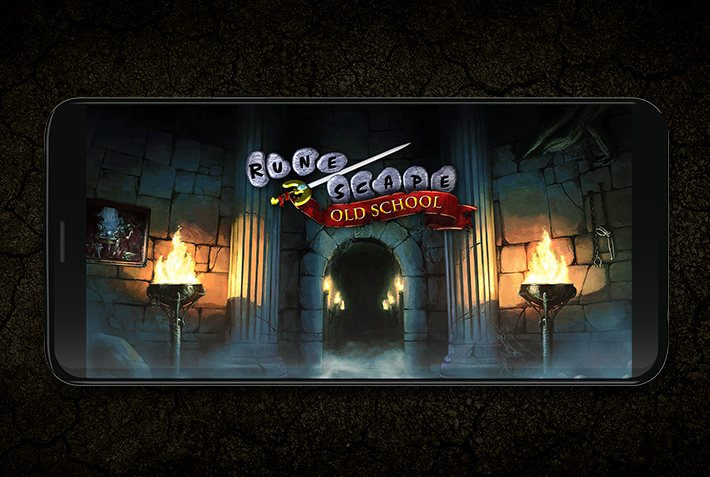 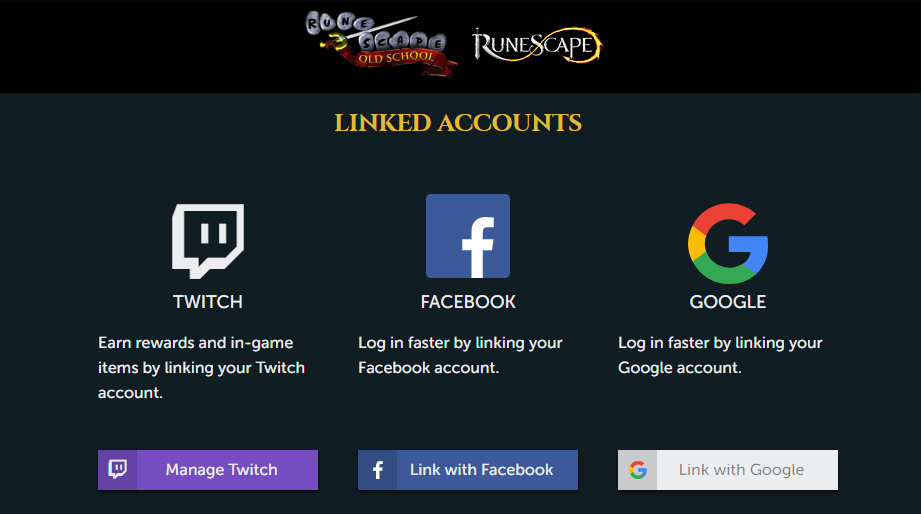 It's not always obvious from looking at the polished final product just how much work goes into these kinds of changes. As a way of thanks for the huge amount of work that went into integrating this feature, we'd like to give due credit to the Mods on the following teams: iOS Users: An issue affecting mobile players on iOS which prevented the game from remembering login details is being looked into by the Mobile Team for a fix in the coming days.

BAFTA Nomination: EE Mobile Game of the Year
As you may have heard, Old School Mobile has been nominated for a BAFTA! We’re currently in the running for the EE Mobile Game of the Year Award and the 2019 BAFTA Games Awards.
We are absolutely thrilled by the opportunity to compete with some of the biggest names in gaming, but if we’re to prosper we’re going to need your help. Unlike the other categories, the EE Mobile Game of the Year Award is decided by public vote. The polls close tomorrow (17:00 GMT on Friday March 29th) so please do consider casting a vote our way. We'd like to extend a huge thank you to everyone who plays Old School – without your commitment and passion for the game none of this would be possible! If you are UK based and interested in lending your support to Old School Mobile in the BAFTA Games awards, you can find all the info on the Official Page and cast your vote there. The deadline for getting your votes in is 29th March 17:00 (GMT) and if you do vote, you'll be in with a chance to win tickets to attend the award ceremony! Don't forget to join us on the 4th April from 18:30 (GMT) at https://www.twitch.tv/bafta to watch the awards! 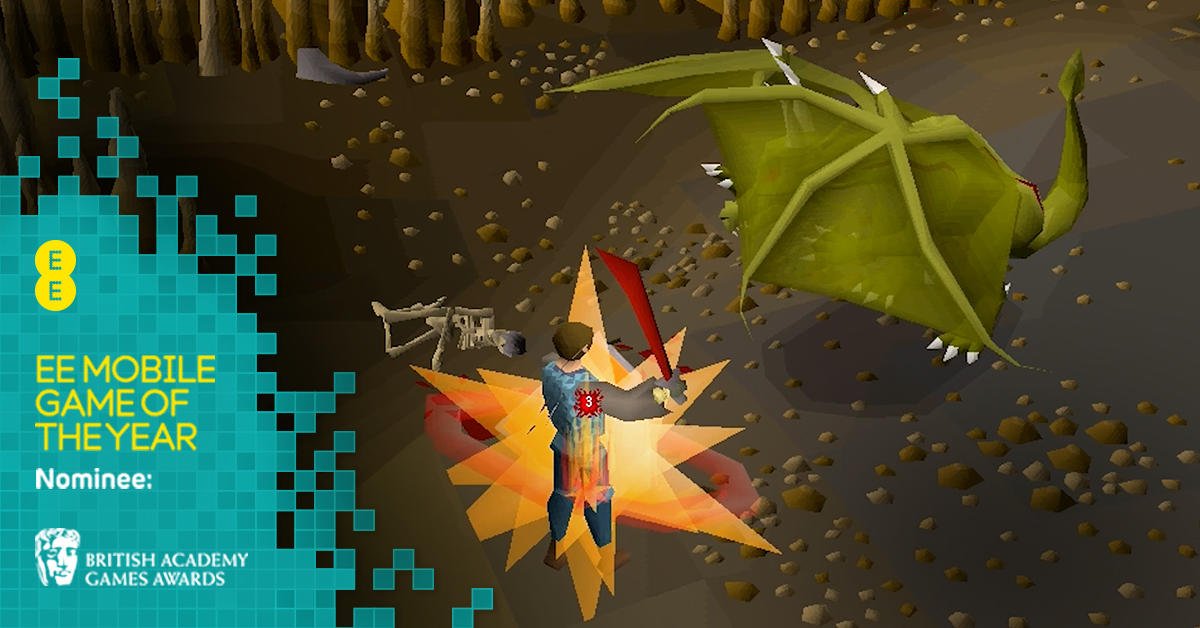 Upcoming Ironman Change: Cannons
We're aware that there are several mechanics within Old School that threaten the integrity of the Ironman mode. Fixing the situation is a delicate affair, however, so rather than rush in with huge sweeping changes we’re going to be tackling each issue on-by-one to make sure each change works as intended. One such issue is the use of Cannons on alt accounts to lure monsters, which is achieved by reducing the alt's attack bonuses to a point that the Cannon never hits. Such strategies artificially boost the XP rates for Ironman accounts. While current rules and mechanics technically allow this, it undoubtedly goes against the spirit of the mode. To maintain the value of Ironmen, it's important that the best methods of gaining experience or items do not rely on interactions with other accounts. A change in next week's update that will alleviate this issue. Our proposal is to give Cannons a small chance to deal 1 damage even for players with low accuracy. This damage will only occur if the NPC is above a certain health threshold to ensure legitimate accounts to not accidentally kill creatures with it unnecessarily and also to limit the ability for lower levelled players to abuse the guaranteed hit of 1. Additionally, this damage is only applied if the player would have previously not hit due to negative attack bonuses. Players using cannons correctly will not have an increase in DPS from this change. Overall, these changes should limit NPC being able to be lured via alternate accounts for Ironmen only.

In Other News
Winter Sweepstake Competition: A big congratulations goes out to Spudgunz for winning the competition who will be receiving a Razer Phone 2 + 6 months of membership! Pures: If you were affected by the XP Bug or gained unwanted experience as a result of the Attack Style change in February only, don't forget to submit an Account Help ticket to get it resolved. More information can be found in this newspost.