Last Thursday we launched two Tournament worlds which allow you to access the weapons and armours proposed in the Theatre of Blood Dev Blog, found here. If you haven't already, head to worlds 408 and 409 to try out the weapons yourself! More detail can be found in last week's news post. We've been closely monitoring your feedback since then and have some adjustments we'd like to make based on what we've seen. These changes have been added to the Tournament world as of 15/03/18, giving you have plenty of opportunity to test them out further before the poll goes live in-game! As soon as the updated rewards are live we will send an in-game broadcast message, alongside updating this post and tweeting about it from the official Old School RuneScape Twitter. If further changes and tweaks to the rewards are required, they will be contained within this post until the poll goes live in-game. Once the poll is live, finalising the rewards being offered, the initial Theatre of Blood Dev Blog will be updated. This will be highlighted via a changelog that will be added to the start of the post. 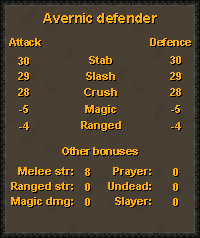 Sanguinesti Staff Much of what we saw regarding the Sanguinesti staff was that it's cost was too high for the amount it healed. We're opting to reduce the cost to 3 Blood runes per cast, and increase the chance of the healing effect occurring to a 1/6 chance. We're also changing it so that it will have an additional max hit over the Trident of the swamp. The Sanguinesti staff is a new tradeable Magic weapon requiring 75 Magic to wield. It is identical in terms of stats to that of the Trident of the swamp, but can hit 1 damage higher. It has the added effect of a 1/6 chance to heal you for 50% of the damage dealt when attacking an NPC. It is charged with Blood runes and uses 3 runes per cast. The staff does not degrade. 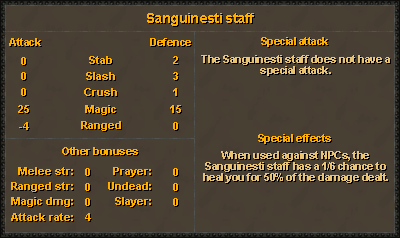 Ghrazi Rapier The Ghrazi rapier is a non-degradable alternative to the Abyssal tentacle, offering a slight increase in overall dps. It is the best Strength training weapon in most circumstances, as well as being superior to other stab weapons, due to the fact it is one-handed. However, we'd like to make some minor changes to make it just that little bit more powerful by increasing the Stab bonus to +94 and the Melee Strength to +89. The Ghrazi rapier is a new tradeable stab weapon that requires 75 Attack to wield. It is not charged and does not degrade. The attack speed of the rapier is the same as the Abyssal tentacle. 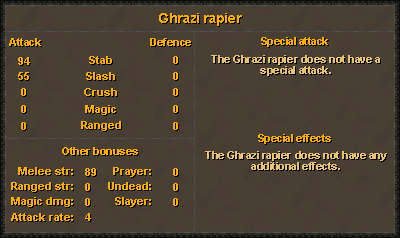 Justiciar Armour We're happy with the general feedback we've seen regarding the Justiciar armour and its effectiveness in PvM situations, so we're not looking to make any changes to its base stats. We are however looking to reduce its effectiveness in PvP situations, by removing the damage reduction effect when fighting against another player. The Justiciar armour is a brand-new set of tradeable tank orientated gear requiring 75 defence to equip. Each individual piece of armour offers defensive stats slightly higher than that of Torag the Corrupted's equipment, with the addition of some Prayer bonus. When the full set of Justiciar armour is equipped, all incoming damage taken is reduced by x/3000, where 'x' is your equipment's defence bonus. This is based on the style of attack being used against you. For example, if an enemy was using a Crush style attack and you had a defensive bonus total of 450 against Crush then 450/3000 = 15% damage reduction. The Justiciar armour does not degrade and does not require charging.

Vampyrium Vambraces We received overwhelming feedback that many of you did not like how the Vampyrium vambraces required a pair of Ranger gloves to complete. In light of this, we've removed them as a requirement, meaning they will now be a standalone drop. No changes will be made to the stats they provide. Vampyrium vambraces are a new tradeable ranged hand slot item that require 75 Ranged and Defence to equip. They offer a slight offensive bonus when compared to Barrows gloves, at the expense of some defensive stats. 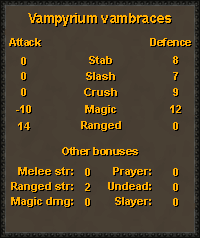 Scythe of Vitur The Scythe of vitur was pitched as being a very slow, hard hitting 2-handed weapon. Unfortunately, it is let down mostly by its low accuracy and speed. We believe that by reducing the attack rate to 5 and increasing the Slash Attack bonus to +110 will make the scythe a much more viable weapon than it currently is. We'll also be changing the current aggressive attack option from Stab to Slash. The Scythe of vitur is a hard hitting, tradeable 2-handed weapon. It has no special attack but can hit up to three enemies once in a 1x3 arc in front of the player. Similar to the special attacks of the Dragon and Crystal halberd, each swing can also hit large creatures up to three times in the same attack. The scythe can only hit a maximum of three NPCs and can only hit a maximum of three times. The first hit deals 100% damage, the 2nd deals 50% and the 3rd deals 25%. Each attack, regardless of which enemy is your primary target, is rolled independently based on your attack bonuses versus the NPCs defence bonuses. The scythe requires 75 Attack and 75 Strength to wield and has two variants, and uncharged and charged version. The uncharged version has relatively low stats, but once charged, gains additional bonuses. Charging the scythe costs 1/100th of a Vial of blood and 3 Blood runes, meaning 100 charges would cost a full Vial of blood and 300 Blood runes. 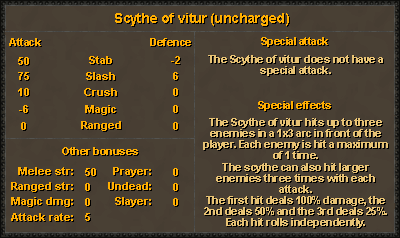 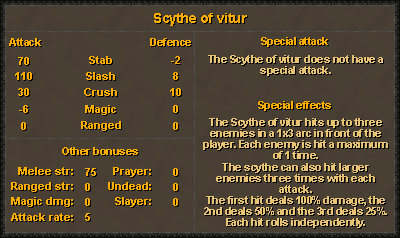 As always, we'll be monitoring your feedback very closely. Further changes may be made where necessary and will be highlighted at the top of this post within a changelog list. We encourage you to log into worlds 408 and 409 to test the rewards and provide any feedback in this forum post, Reddit (/r/2007scape and /r/oldschoolrs) or Twitter using #TheatreOfBlood. Mods Archie, Ash, Ayiza, Curse, Ed, Ghost, Jed, John C, Kieren, Lottie, Mat K, Maz, Roq, Ry, Stone, Sween, Weath, West & Wolf
The Old School Team